Thirteen journalists with ties to the University of Cincinnati are part of The Cincinnati Enquirer’s award-winning team of more than 60 reporters, photographers and videographers to win the 2018 Pulitzer Prize for local reporting.

University of Cincinnati journalism student Shae Combs had already won a regional Emmy award when she embarked on a three-month photography internship last summer at The Cincinnati Enquirer.

The aspiring photojournalist spent the last week of her internship shooting video at a halfway house, drug court and needle exchange program for a story documenting “Seven Days of Heroin” in the Greater Cincinnati region and was asked to return later on a freelance basis to help provide supplemental footage.

“It was a massive undertaking, and people worked for weeks after to put such a powerful story together,” Combs explained. “It was definitely something we all poured our hearts and souls into because we care about our community.”

When the story published in September, Combs knew she and her colleagues had produced an “amazing, powerful story,” but never did she think it would win a Pulitzer Prize — the Super Bowl of journalism.

“I was an intern. Pulitzers weren’t on my radar as something attainable,” she said with a laugh. “I was in the library writing a paper and got on Twitter and saw it [won]. I started crying.”

Combs is one of 13 journalists with ties to UC to be part of The Enquirer’s award-winning team to take journalism’s top prize for 2018.

The prize-winning Bearcats, a mix of current and former students, instructors and an advisor, worked with a total of more than 60 Enquirer reporters, photographers and videographers on the project, which won the Pulitzer Prize for local reporting.

The Pulitzer Prize Board, which announced the awards Monday, praised “Seven Days of Heroin” as “a riveting and insightful narrative and video documenting seven days of greater Cincinnati's heroin epidemic, revealing how the deadly addiction has ravaged families and communities.”

“I was an intern. Pulitzers weren’t on my radar as something attainable.”

The immersive project documented an “ordinary” week — one that was “unexceptional by the dreary standards of what has become the region’s greatest health crisis,” according to the story — in Greater Cincinnati, from July 10-16.

Enquirer reporter Keith BieryGolick, A&S ’13, said nearly the entire Enquirer newsroom came together to work on the project, with the goal of reporting on the region’s greatest health crisis in a new and different way.

BieryGolick, a suburban beat reporter, shadowed the chief investigator for the Warren County Coroner’s Office for two days as he navigated between area hospitals and the region’s crime lab investigating possible drug-related deaths.

BieryGolick, an alumnus of UC’s journalism program, also spent a day with a couple who’ve lost two adult children to drug-related deaths and whose remaining child is in jail for a drug-related crime.

All newspapers do stories on drug abuse, said BieryGolick, but "this project had the impact it did because it hadn’t been done before, and reporters and editors were looking for a new approach to tell it in a way that had greater impact.”

Phil Didion, A&S ’14, had only been on the job for a week when the project launched. The UC journalism alumnus took video footage of lab technicians testing for drugs at a Northern Kentucky crime lab, combed through police body cam footage and listened to heart-rending 911 calls.

“You’d hear these kids freaking out: ‘My dad said he wasn’t feeling well. I can’t tell if he’s breathing anymore,’” Didion said of some of the 911 calls he monitored. “It weighs on you. Being a journalist and hearing and seeing these things, it gets you a little bit sometimes, but you have to put on a tough face and keep going.”

‘A co-op on steroids’

Jeff Blevins, an associate professor and head of UC’s Department of Journalism, isn’t surprised to see so many Bearcat connections among The Enquirer’s team.  Several Enquirer staff members teach courses at the university and UC journalism students regularly intern at the digital news media organization, where they often have opportunities to participate in high-profile work that builds resumes and boosts careers.

“It’s essentially a co-op on steroids,” said Blevins, of UC’s relationship with The Enquirer.  “There’s just such interplay.” 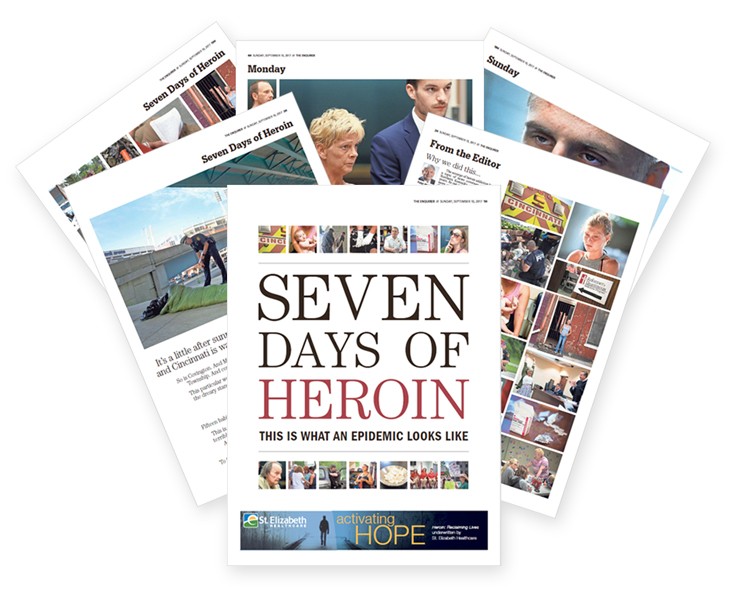 The Enquirer sent more than 60 reporters, photographers and videographers into Greater Cincinnati communities to chronicle an ordinary week amidst the region's heroin epidemic. During the week documented (July 10-16, 2017), The Enquirer reported that 180 overdose cases were reported to area hospitals and 18 deaths were known or suspected to be the result of overdoses.

Monroe Trombly, A&S ’17, interned at The Enquirer for nine months from July through April as a general assignment and breaking news reporter. He closely monitored area police scanners for overdose-related calls as part of the project.

The aspiring science journalist credits his internship to the strong relationship he developed with UC adjunct faculty member Peter Bhatia, the multiple Pulitzer Prize-winning editor and vice president of the Detroit Free Press, who led The Enquirer when the story was published.

“I really think the UC journalism department is extraordinarily strong,” Trombly said. “It’s incredibly rewarding to see that camaraderie and buildup from UC to The Enquirer.  I’m insanely proud to be a UC grad and to have worked for the hometown paper for such a long time.”

The opportunity to have real-world experiences in an urban landscape and work with seasoned professionals — including Pulitzer Prize-winning faculty — is one of the biggest draws of the journalism program, said Blevins.

Students pursuing a bachelor’s degree in journalism are required to do at least one internship, but with so many opportunities available locally, many students choose to do several internships before they graduate, he said.

“Cincinnati is a great media market, a great news city. There is a rich culture of journalism in this city to begin with,” said Blevins. 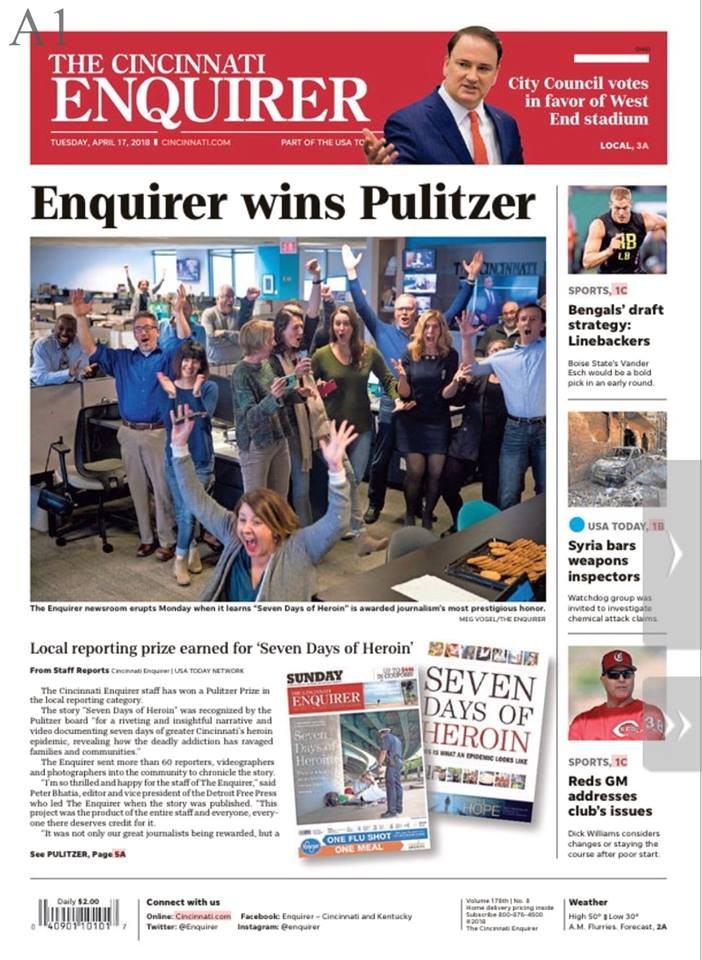 Apart from The Enquirer, Blevins points to the E.W. Scripps Co., headquartered in Cincinnati, as well as several other major broadcast television outlets and a variety of alternative and specialty news publications and media outlets. Other internships opportunities abound on campus, including at UC Magazine.

“Here, you have this great urban playground. There are so many stories to tell and so many broadcast outlets to work at,” Blevins said. “I get more requests for interns and student workers that I can barely meet demand.  That’s a really good position to be in.”

Like many journalism students, Didion honed his skills at The News Record, UC’s student newspaper. The campus’ urban location not only offered a chance for stories aplenty, but also the opportunity to network with industry pros, he said.

“With UC being so close to the city, I met a lot of Enquirer people. I started getting a good grip of what journalism meant and why it was important,” Didion said. “There were times when we [The News Record] got stories before the local TV stations. We were proud of that.”

“I’m really grateful for UC and making the choice that I did. I don’t think I would be at The Enquirer without UC.”

The chance to work with faculty members with decades of experience in journalism attracted BieryGolick to UC’s journalism program. Between his “real-world” classroom assignments and work at The News Record, he was able to build a portfolio that netted him a job with one of the Enquirer Media’s community papers soon after he graduated.

“I’m really grateful for UC and making the choice that I did,” he said. “I don’t think I would be at The Enquirer without UC.”

For Combs, who’s set to graduate at UC’s Commencement on April 27, being part of a Pulitzer Prize-winning team is not only personally validating, but also comes with serious bragging rights — especially at upcoming job interviews.

“To have this on my resume forever now is an amazing feeling,” she said. “I’m grateful for everything.” 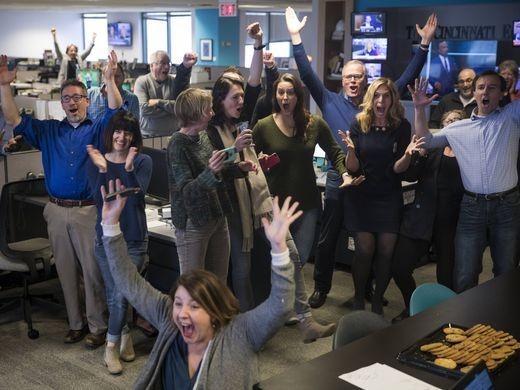 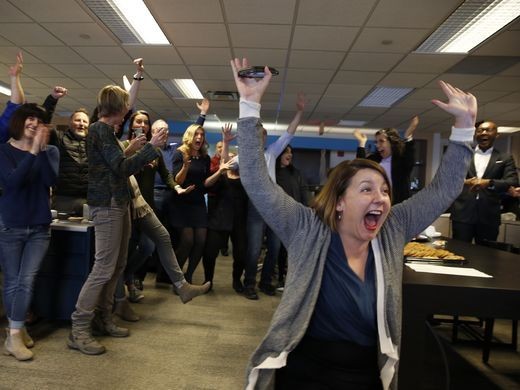 Craig Flournoy has worked on a hay farm, pipeline, steel fabricating plant, offshore oil rig and as a Bible salesman, waiter and landscaper. For 22 years, he was an investigative reporter at the Dallas Morning News. His journalism was honored with more than 50 state and national awards, including the 1986 Pulitzer Prize for national reporting. His work helped prompt unprecedented federal action, allowing hundreds of poor black families to move into good housing in safe neighborhoods. Since 2002 he has taught journalism. The National Endowment for the Humanities awarded him a fellowship to write a book about white and black press coverage of the Civil Rights Movement. 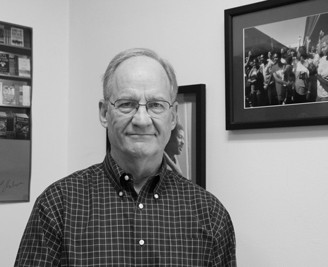 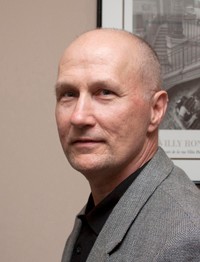 Bob Jonason teaches convergent media classes, including the Media Bureau, which produces multimedia stories in partnership with local news outlets. He is the recipient of a 2017 Scripps Howard Journalism Entrepreneurship Institute fellowship, granted to college professors who are interested in teaching the concepts and practices of entrepreneurial journalism.

Jonason has spent mmore than three decades in professional journalism. For a decade he was a leader in digital media at The Indianapolis Star, where he directed The Star’s online services department, managing content, sales, production and design teams and led the strategic development of digital media initiatives.

Jonason also was an editor for 12 years at Philadelphia Newspapers, first in the newsroom of The Philadelphia Inquirer and then as a founding editor of Philadelphia Online, now Philly.com. Early in his career he was on The (Fort Wayne) News-Sentinel staff that was honored with a Pulitzer Prize for local reporting.

Peter Bhatia, a multiple Pulitzer Prize-winning editor who has spearheaded meaningful journalism and digital advances at numerous news sites across the country, joined the Detroit Free Press in 2017 as editor and vice president. He previously served as editor at The Cincinnati Enquirer and regional editor for the USA TODAY Network’s Ohio Region.

Bhatia was director of the Reynolds National Center for Business Journalism at Arizona State's Cronkite School of Journalism. He joined UC in June 2014, as visiting professor in journalism ethics after a long and successful career at The Oregonian in Portland, where he was editor. 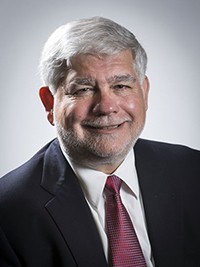 His resume includes helping lead newsrooms that won nine Pulitzer Prizes, including six in Portland. He is a six-time Pulitzer juror. He is the first journalist of South Asian descent to lead a major daily newspaper in the U.S., running The Oregonian from 2010 to 2014. He previously was the paper's managing editor and executive editor, teaming with then-editor Sandra Mims Rowe. Rowe and Bhatia were named editors of the year by Editor & Publisher magazine in 2008. He served as president of the American Society of Newspaper Editors in 2003-04 and is a regular speaker on contemporary journalism issues. 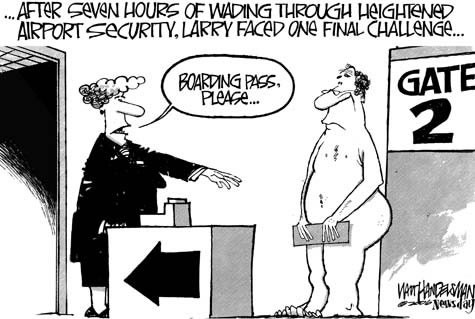 Walt Handelsman is the two-time Pulitzer Prize-winning editorial cartoonist and animator for The New Orleans Advocate. His work is nationally syndicated by Tribune Content Agency in Chicago to over 200 newspapers around the country and internationally.

One of the mostly widely reprinted cartoonists in America, Handelsman’s work has been seen in Newsweek, Time, The New York Times, USA Today, The Washington Post and The Chicago Tribune. He has been a featured guest on CNN, the PBS NewsHour and ABC’s “Nightline.”

Handelsman has won every major journalism award for cartooning excellence including: the 1989 and 1993 National Headliner Award, a 1992 and 2015 Society of Professional Journalists award, the 1996 Robert F. Kennedy Journalism Award, the 2003 Scripps Howard Award for national journalism, a 2007 Online Journalism Award for online commentary and in both 1997 and 2007, the Pulitzer Prize.

About UC's Department of Journalism

UC’s Department of Journalism prepares students for the diverse and expanding field of journalism with experiential learning opportunities and individualized relationships with award-winning faculty mentors in a vibrant urban environment with an active media market. Our comprehensive offerings allow students to customize their skill sets and direct their own career paths in modern news media while pursuing learning opportunities year round with professional internships, student media and hands-on journalism classes.

Learn more about UC's undergraduate and certificate programs in the Department of Journalism or explore the university's many other degrees and programs. Tour the campus and apply today.