The University of Cincinnati is on track to smash records again, as projections call for an all-time record fall enrollment of 45,000 students, including the largest first-year class in the university’s 197-year history.

This year is expected to be the fourth consecutive overall enrollment record for UC, topping last year’s all-time high of 44,251.

Estimates suggest that this year’s incoming class of 6,900 first-year students — up 8.9 percent from last year — is not only the university’s largest, but also among the smartest.

The class, which is comprised of students from 33 states and 45 countries, also includes 55 National Merit/Achievement Scholarship recipients, up from 50 last year and nearing the target of 60 set for 2019.

UC is also celebrating gains in retention, students seeking bachelor's degrees on the Uptown Campus and graduate student enrollment in 2016, according to early projections:

UC's final enrollment will be reported to the state in mid-September. 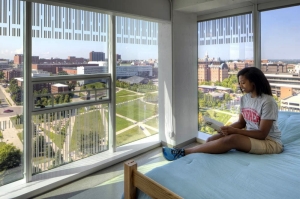 With wall-to-wall windows, students can see nearly all of the campus from Morgens and Scioto hall rooms. Photo/Brad Feinknopf 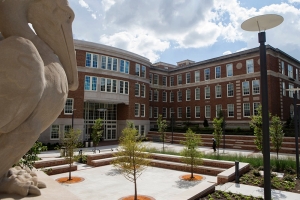 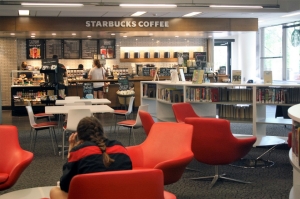 Check out all that's planned for students as they return to campus.

UC's Office of Admissions can help you find out more about how to become a University of Cincinnati student.

See for yourself why Forbes Magazine called UC one of the World's Most Beautiful Campuses by scheduling a visit.