UC Professor Andrew Czaja indicates the layer of rock from which fossil bacteria were collected on a 2014 field excursion near the town of Kuruman in the Northern Cape Province of South Africa. Photo/Aaron Satkoski

UC geologist uncovers 2.5 billion-year-old fossils of bacteria that predate the formation of oxygen.

Somewhere between Earth’s creation and where we are today, scientists have demonstrated that some early life forms existed just fine without any oxygen.

While researchers proclaim the first half of our 4.5 billion-year-old planet’s life as an important time for the development and evolution of early bacteria, evidence for these life forms remains sparse including how they survived at a time when oxygen levels in the atmosphere were less than one-thousandth of one percent of what they are today.

“These are the oldest reported fossil sulfur bacteria to date,” says Andrew Czaja, UC assistant professor of geology. “And this discovery is helping us reveal a diversity of life and ecosystems that existed just prior to the Great Oxidation Event, a time of major atmospheric evolution.”

3-D image showing the wrinkled surface of the compressed fossil, originally round, the bacterial outer shell is now preserved in the shape of a deflated beach ball. Image created using confocal laser scanning microscopy in the Czaja Geology Lab at the University of Cincinnati. Video/Andrew Czaja

The 2.52 billion-year-old sulfur-oxidizing bacteria are described by Czaja as exceptionally large, spherical-shaped, smooth-walled microscopic structures much larger than most modern bacteria, but similar to some modern single-celled organisms that live in deepwater sulfur-rich ocean settings today, where even now there are almost no traces of oxygen.

In his research published in the December issue of the journal Geology of the Geological Society of America, Czaja and his colleagues Nicolas Beukes from the University of Johannesburg and Jeffrey Osterhout, a recently graduated master’s student from UC’s department of geology, reveal samples of bacteria that were abundant in deep water areas of the ocean in a geologic time known as the Neoarchean Eon (2.8 to 2.5 billion years ago).

“These fossils represent the oldest known organisms that lived in a very dark, deep-water environment,” says Czaja. “These bacteria existed two billion years before plants and trees, which evolved about 450 million years ago. We discovered these microfossils preserved in a layer of hard silica-rich rock called chert located within the Kaapvaal craton of South Africa.”

With an atmosphere of much less than one percent oxygen, scientists have presumed that there were things living in deep water in the mud that didn’t need sunlight or oxygen, but Czaja says experts didn’t have any direct evidence for them until now. 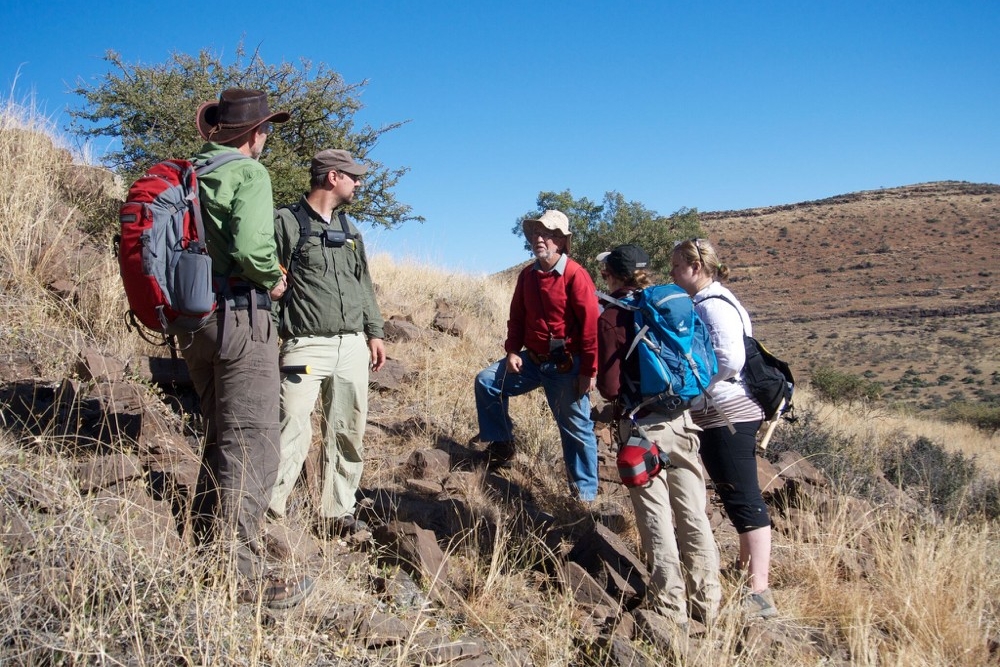 Czaja argues that finding rocks this old is rare, so researchers’ understanding of the Neoarchean Eon are based on samples from only a handful of geographic areas, such as this region of South Africa and another in Western Australia.

According to Czaja, scientists through the years have theorized that South Africa and Western Australia were once part of an ancient supercontinent called Vaalbara, before a shifting and upending of tectonic plates split them during a major change in the Earth’s surface.

Based on radiometric dating and geochemical isotope analysis, Czaja characterizes his fossils as having formed in this early Vaalbara supercontinent in an ancient deep seabed containing sulfate from continental rock. According to this dating, Czaja’s fossil bacteria were also thriving just before the era when other shallow-water bacteria began creating more and more oxygen as a byproduct of photosynthesis.

“We refer to this period as the Great Oxidation Event that took place 2.4 to 2.2 billion years ago,” says Czaja. 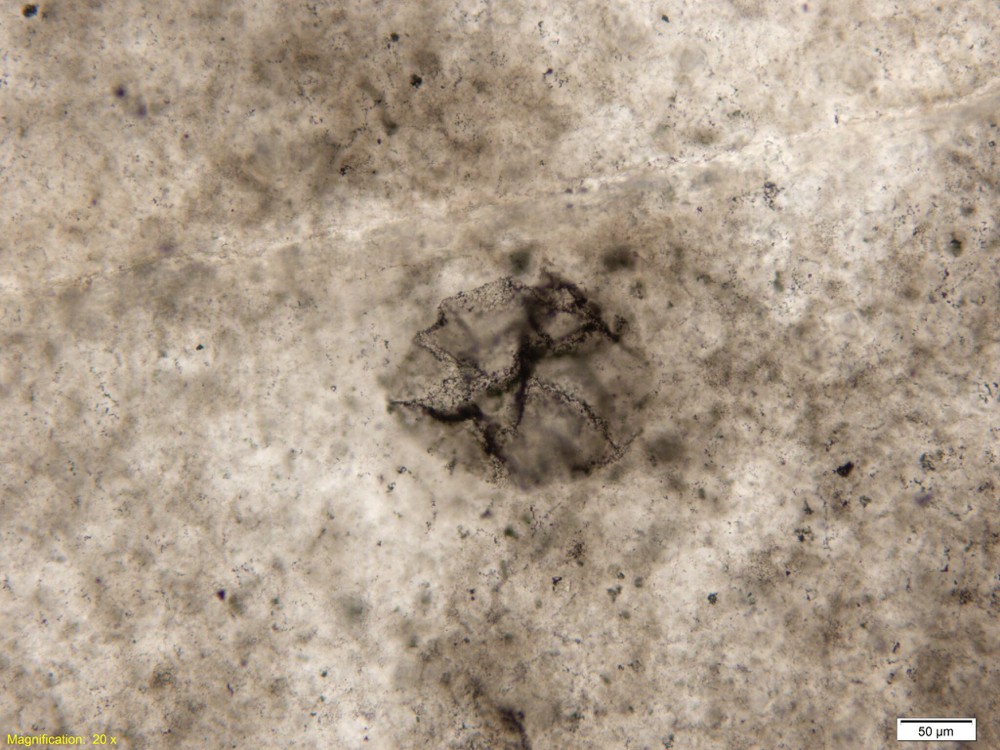 Czaja’s fossils show the Neoarchean bacteria in plentiful numbers while living deep in the sediment. He contends that these early bacteria were busy ingesting volcanic hydrogen sulfide –– the molecule known to give off a rotten egg smell –– then emitting sulfate, a gas that has no smell. He says this is the same process that goes on today as modern bacteria recycle decaying organic matter into minerals and gases.

“The waste product from one [bacteria] was food for the other,” adds Czaja.

“While I can’t claim that these early bacteria are the same ones we have today, we surmise that they may have been doing the same thing as some of our current bacteria,” says Czaja. “These early bacteria likely consumed the molecules dissolved from sulfur-rich minerals that came from land rocks that had eroded and washed out to sea, or from the volcanic remains on the ocean’s floor. 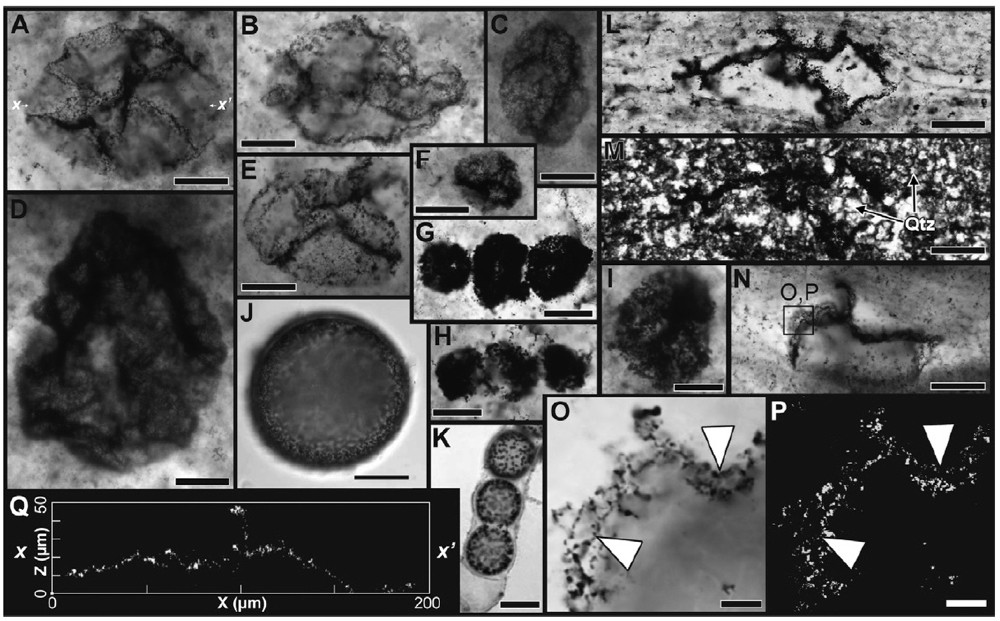 Microstructures here have physical characteristics consistent with the remains of compressed coccodial (round) bacteria microorganisms. Slide/Andrew Czaja, permission to publish by Geological Society of America

FUNDING
This work was supported by the National Geographic Society–Waitt Grant Program and the NASA Astrobiology Institute.

Czaja’s paper, “Sulfur-oxidizing bacteria prior to the Great Oxidation Event from the 2.52 Ga Gamohaan Formation of South Africa,” was published in Geology, a journal of the Geological Society of America. (access to the full text online is FREE until Dec. 15)

The Department of Geology at the University of Cincinnati is a nationally ranked program with high-caliber faculty and a strong research reputation. The department teaches and conducts research in many areas of the geosciences including paleontology, Quaternary geology, geomorphology, sedimentology, stratigraphy, tectonics, environmental geology and biogeochemistry. Faculty maintain high-tech laboratories and conducts field work all over the world, and our students are involved every step of the way.

The Geological Society of America strives to be the premier geological society supporting the global community in scientific discovery, communication and application of geoscience knowledge. Their mission is to advance geoscience research and discovery, service to society and the stewardship of Earth and the geosciences profession. 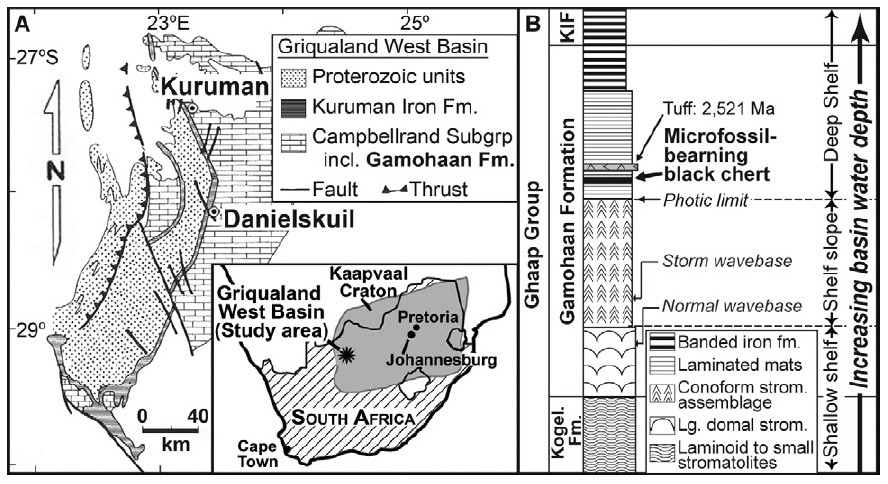 Fossils were collected from the Griqualand West Basin of the Kaapvaal craton, South Africa. Graph/Andrew Czaja, permission to publish by Geological Society of America