A drone made for a dark night

(Or a Dark Knight)

To get drones to fly around complicated obstacles in the dark by themselves, University of Cincinnati researchers are turning to the pros.

Bats have evolved to use sound and echolocation to navigate and find food. Their sonar is so keen, in fact, that nectar-loving bats can “spot” their favorite flowers in pitch darkness using only sound.

Now UC’s College of Engineering and Applied Science is harnessing this superpower to improve drone navigation and autonomy.

Drones can be piloted manually using line of sight, video cameras, global positioning satellites and laser-based radar called LIDAR. UC for years has been developing autonomous drones that rely on fuzzy logic and other forms of artificial intelligence.

But the latest project adds another navigational layer: sound.

Researchers said this is especially useful in situations where LIDAR and satellite systems are less reliable such as smoky or dusty conditions in buildings or tunnels.

“The problem is challenging because inside a building, you have obstacles in a very cluttered environment,” said Manish Kumar, UC associate professor of aerospace engineering. “The unmanned aerial vehicle can navigate in smoky or dusty conditions using sonar.” 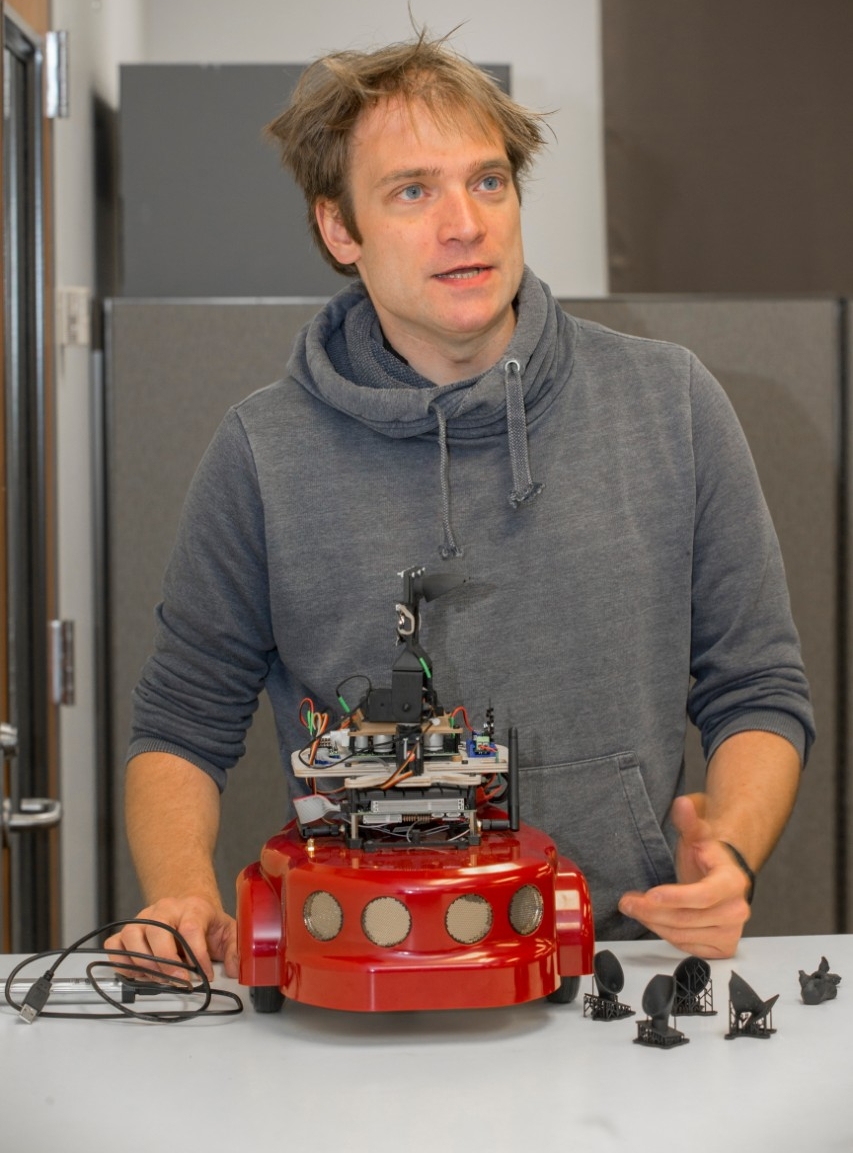 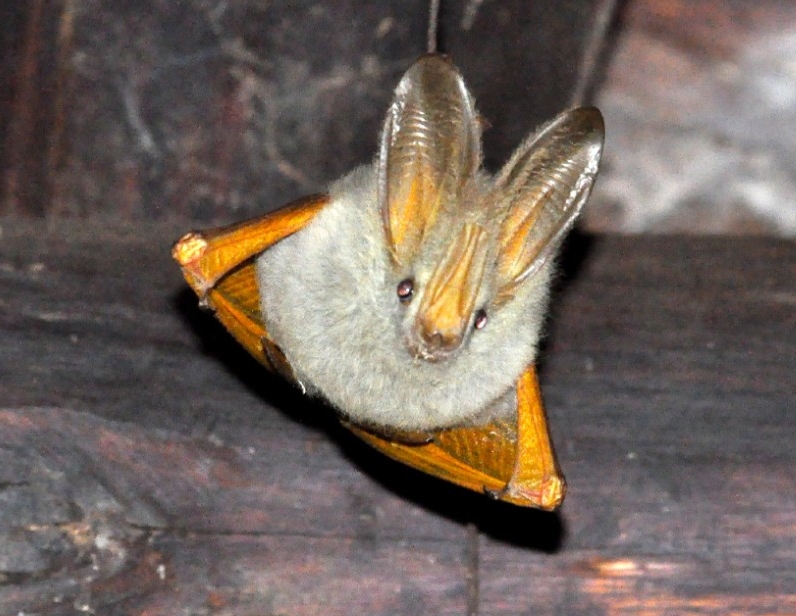 A slit-faced bat has enormous ears to help in echolocation. (Michael Miller)

“It’s like they’re waving a flashlight in front of them to find prey in the dark.”

UC Assistant Professor Dieter Vanderelst is uniquely qualified to solve this problem. He majored in biology and studied bats and how they navigate in Israel’s rocky Negev desert. He splits his time between the engineering college and the psychology and biology departments of UC’s McMicken College of Arts and Sciences.

“There are hundreds of species of bats and they all have very different calls at different frequencies,” Vanderelst said.

Leaf-nosed bats use their odd-shaped appendages to amplify and focus sound at a constant frequency. Other bats create a symphony of chatters, which enables them to find fruit and flowers by sound.

“Intuitively you’d think a flower is easy to find because it’s colorful and stands out from the green of the forest. But color doesn’t mean anything at night,” Vanderelst said. “Their ability to scan the leaves to find flowers is either incredible or we’re just missing something that makes it easy. We might be looking at it from the wrong point of view.” 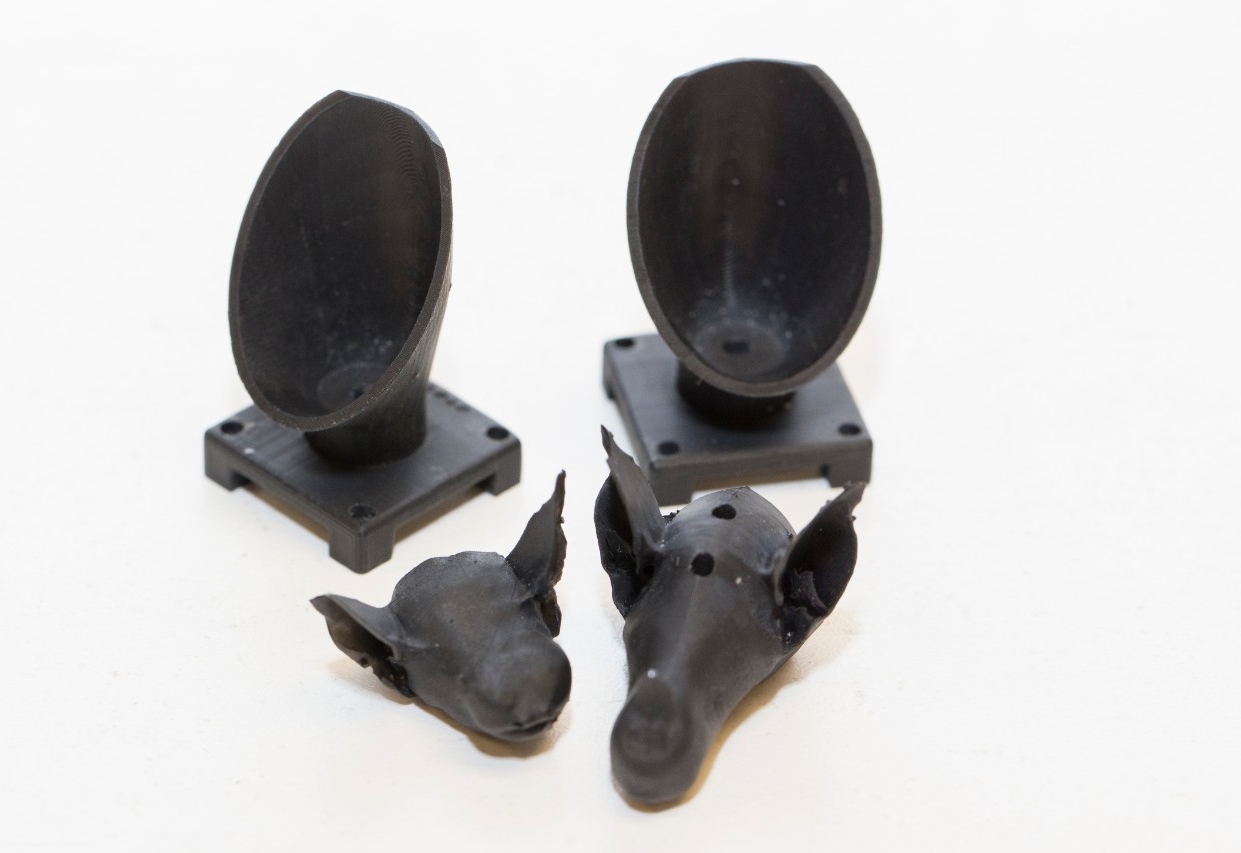 While our binocular vision gives us a 210-degree panoramic view, Vanderelst said bats have a much narrower field of detection using a beam of sound that spans less than 60 degrees.

“It’s like they’re waving a flashlight in front of them to find prey in the dark,” Vanderelst said.

Bats are expert at it. Besides catching food on the fly, bats can find insects and frogs that are hiding motionless on leaves.

“If the drone’s cameras fail because it’s dark or dusty, it would be great to have an autopilot that steers you away from obstacles using echolocation.” 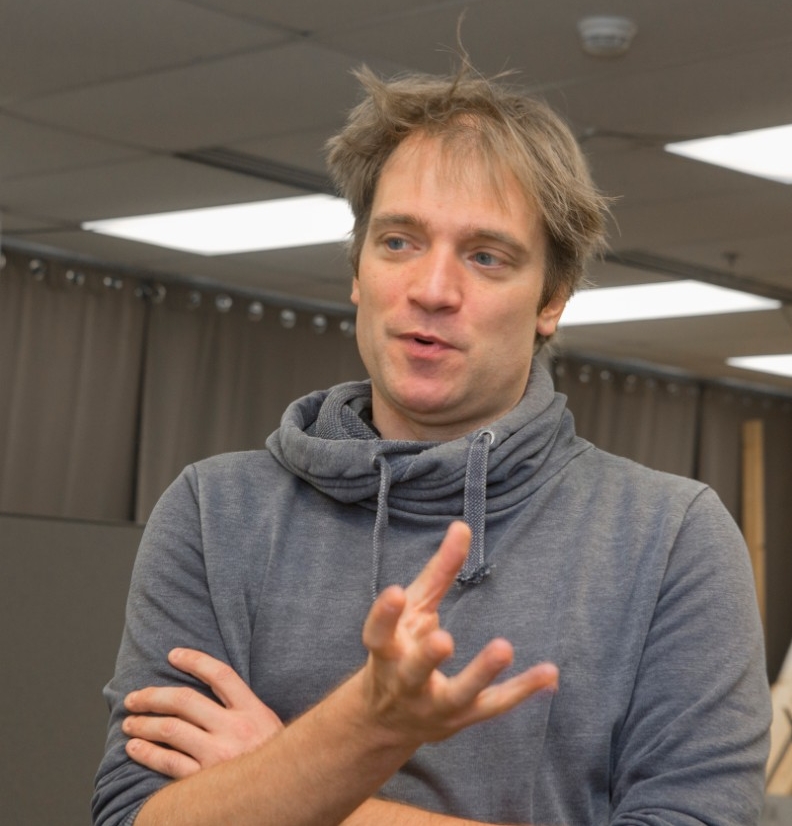 To understand how he might translate bat skills to a computer drone, Vanderelst started in his UC lab.

He built a robot.

“I’m interested in looking at how bats actively use sonar to get around the world,” Vanderelst said. “I hope to convince people we can use echolocation on very small drones.”

Vanderelst designed his sensor system by taking cues from nature. First, he used a 3D printer to render the heads of tiny leaf-nosed bats as a reference guide. His robot’s microphones mimic the shape and contour of bat ears, placed slightly offset on the robot frame in much the same way a barn owl’s ears are asymmetrical on its skull. This helps the night hunters home in on prey in complete darkness using sound alone.

The size of a Yorkshire terrier, the red three-wheeled robot has an array of ultrasonic speakers and microphones that can emit tones or pulses of sound and sensors to detect the reflection or echo. Just as no two bird species sound the same, bats make chirps of unique frequencies and duration as well.

The robot’s bat-like chirps range from 25 to 75 kilohertz, but Vanderelst said 50 is the sweet spot. To capture the echolocation ability of bats, a drone would have to be nearly as acrobatic.

“A bat turns its head first to look where it wants to fly and its body follows behind,” Vanderelst said. “Bats constantly change the focus of what they’re looking at, so my robot needs to be able to steer where it is looking so it can do the same.” 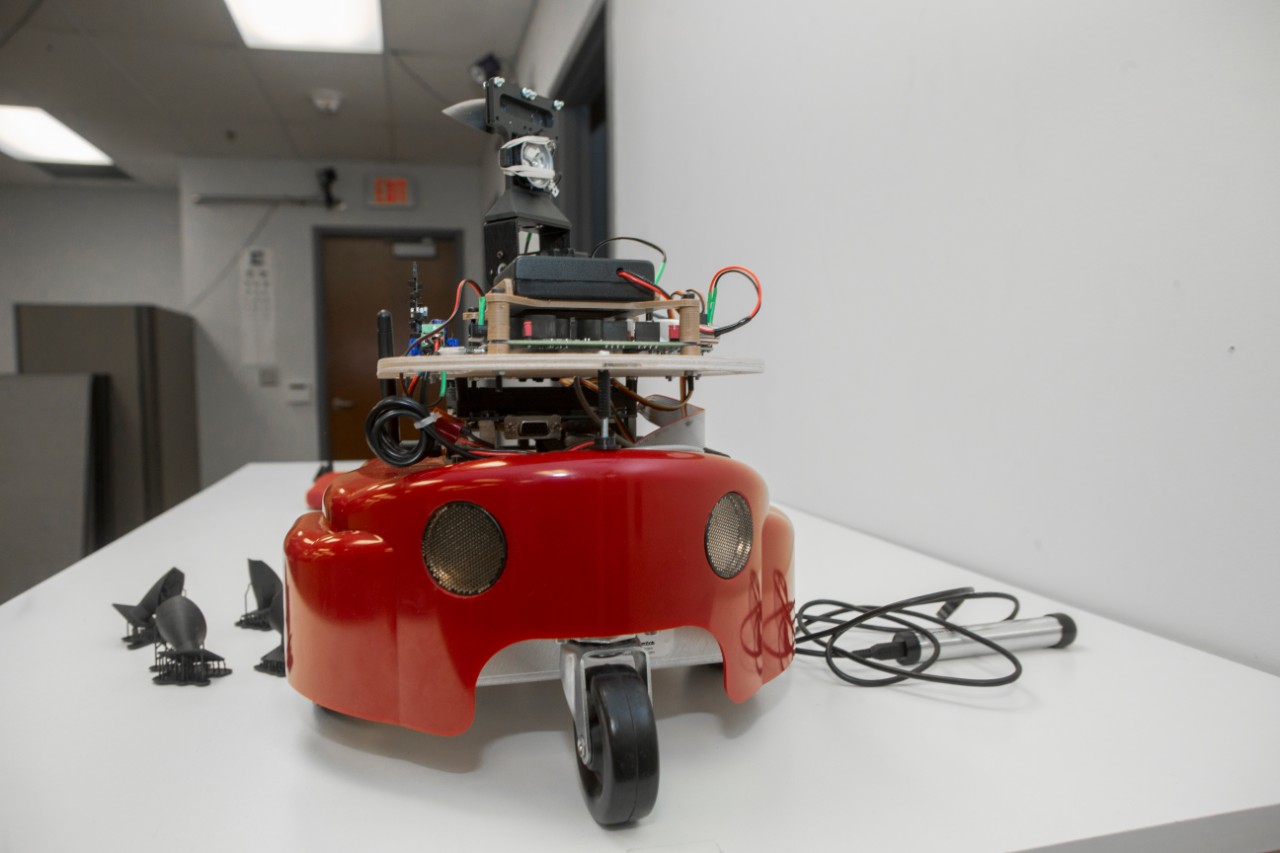 UC professor Dieter Vanderelst designed a robot with speakers that emit bat-like chirps and sensors to detect the echo for real-time navigation.

Vanderelst said the lessons he learns getting a robot to navigate independently in two dimensions on the ground will translate to a drone operating in three-dimensional space. He envisions a drone cocking its “ears” independently of each other to echolocate with precision in tight confines the way bats do.

“Flying a drone is a highly technical skill. The operator has to concentrate very hard not to crash into anything,” Vanderelst said. “And if the drone’s cameras fail because it’s dark or dusty, it would be great to have an autopilot that steers you away from obstacles using echolocation.”

The project captured the attention of the U.S. Department of Homeland Security, which is interested in exploring applications, UC’s Kumar said.

Kumar said this drone will be able to fly autonomously into an unfamiliar area while it scans and maps the confines of the 3D space for use by distant human observers. This would be valuable for SWAT teams or rescue workers in situations where sending a person in to scout a location might put lives at risk.

“That’s where Dieter’s bat-inspired drone will help us,” Kumar said. 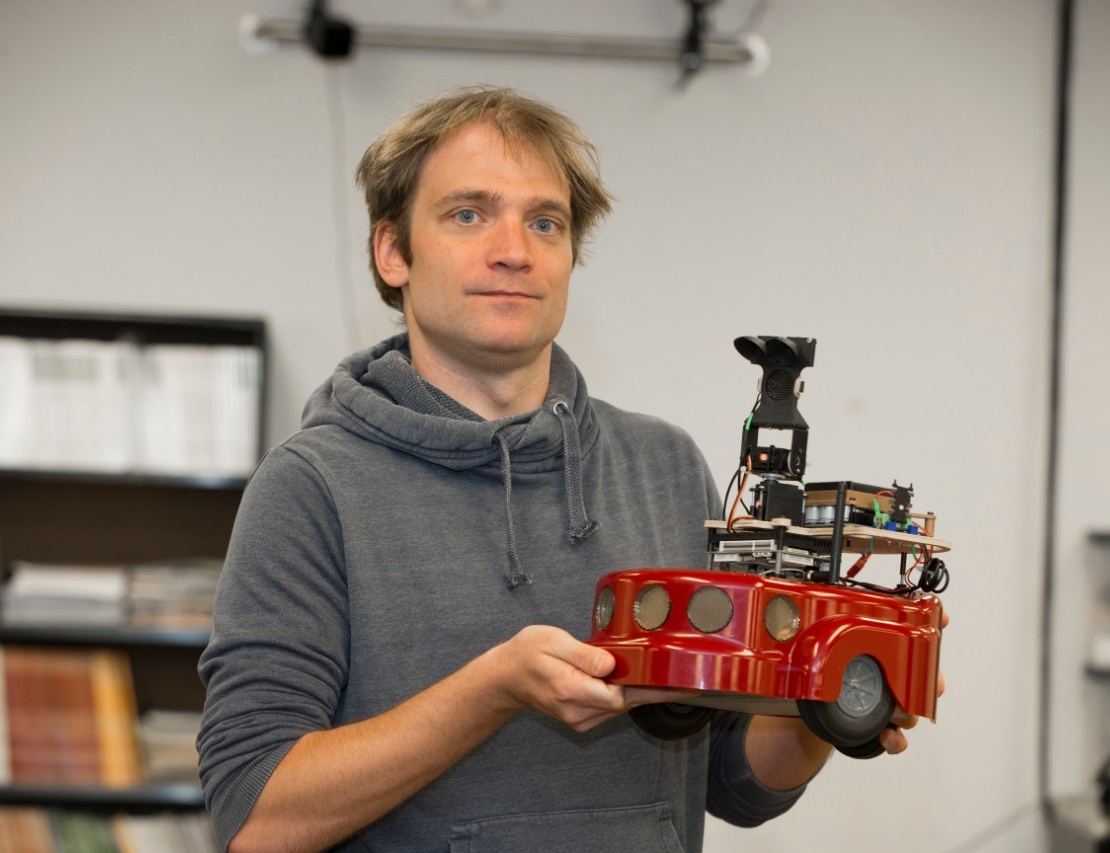 UC professor Dieter Vanderelst holds up his bat-inspired robot in a UC robotics lab. The lab is outfitted with dozens of motion-capture cameras to study movement.