Illustrating a typical male courtship. The lower butterfly is the male engaging in a series of pendulum like “sweeps” below the female. This dance allows him to showcase the bright colors on the upper surfaces of his wings that females prefer and only the butterfly's sophisticated visual system can see. If his courtship flight is successful, the female will land on a plant or other substrate below and allow him to mate with her.

The birds and bees of butterflies

When insects get romantic, their foreplay often involves some pretty crazy things like hypnotic dance moves and flashy colors. In some species it ends with a complex ejaculate package that does more than fertilize offspring.

In the case of butterflies, the cabbage white Pieris rapae in particular, scientists have found male butterfly ejaculate –– a complex package designed to deliver sperm –– also contains a dose of valuable life-extending nutrients that female butterflies devour like candy.

But receiving this parcel comes at a cost –– male dominance.

It comes covered in a hard shell that takes three days to digest, during which time the female cannot mate again, says University of Cincinnati biologist Nathan Morehouse.

Recent interdisciplinary research led by Morehouse in the Morehouse Research Lab and Nathan Clark, biologist in the Clark Research Lab at the University of Pittsburgh looked closer at the complex structures and mechanisms within male butterfly ejaculates and the adaptive responses in the female butterfly reproductive tract.

The researchers hope these study findings will aid in understanding the complex human reproductive cycle and the occasional problems that originate on a molecular level. The authors published their co-evolutionary results in the June journal Proceedings of the National Academy of Sciences.

“As scientists, we already knew that male butterfly ejaculates were three-fold complex structures we call spermatophores –– composed of an outer envelope, an inner matrix of fluids and a bolus of sperm,” says UC’s Morehouse. “What we didn’t know and found through our research is that these three structures are distinctly different in protein composition, are separately stored in the male reproductive tract and are transferred sequentially to the female reproductive tract during mating.”

Why such an elaborate process for such a tiny butterfly? Control over female reproduction, Morehouse says.

Because the spermatophore occupies much of the female reproductive tract, she cannot mate again until it is gone. Males make it tough for her by encasing the spermatophore in a hard shell. This delay benefits the male by assuring more of his sperm fertilize her eggs. Close-up of the intact spermatophore from a male Pieris rapae butterfly.

Method behind his madness

“In this set of species, and in many insects, they have what’s called last male sperm precedence,” says Clark. “When another male comes in and mates, his sperm either displaces the first male’s sperm or pushes them to the back.”

Occasionally, individual male seminal fluids and female enzymes won’t work together efficiently, creating an imbalance that can result in low egg fertilization. The researchers say looking at how female butterflies have resolved this obstacle may open the curtain for correcting similar protein-enzyme imbalances in human infertility.

Using high-tech computerized technology such as mass spectrometry and older standard biochemical processes, the researchers determined that the tiny winged macho-men transfer 13 percent of their total body weight through their spermatophore complex during the mating process. But surprisingly, only 2 percent of that is actually sperm.

Pieris rapae spermatophore where researchers from the Morehouse Lab have separated the indigestible outer envelope from the soft soluble “inner matrix” to illustrate these two parts of the spermatophore.

The rest of the complex goody bag of proteins, carbohydrates, lipids and other compounds play all sorts of other important roles in reproduction –– not the least of which is a way for the males to prevent the female from mating again for about three to four days, says Morehouse.

On the flip side, he says females benefit much more by mating often for a number of reasons:

“To keep a female from remating, the males have developed a hard outer shell around the precious nutrients that are especially desirable by females to repair their cells and live longer,” says Clark. “This hard outer shell gets transferred behind the bolus of sperm and acts as a copulatory plug that prevents the female from being able to mate again with other males –– hopefully insuring his sperm as the cocktail that fertilizes the female’s eggs when she lays them.” The signum. A hinged, chewing jaw inside the female reproductive tract that helps her to mechanically break into the male spermatophore.

Wait! Not so fast

“I was fascinated to discover that females are actually very well equipped to quickly digest the nuptial gift from the male,” says Camille Meslin-Auclair, post-doctoral biologist who performed most of the analysis working at the University of Pittsburgh. “Even more fascinating are the mechanical and biochemical tools she possesses to dissolve this outer shell.”

In an evolutionary twist of fate, these clever little females have developed an extraordinary way to break free from the male’s control.

“We discovered a surprising mechanical chewing device inside the female reproductive tract lined with a spectacular array of tooth-like structures that can gnaw through the hard outer shell in a matter of hours,” says Morehouse. “Without this mechanism we affectionately call the ‘vagina dentata,’ it would likely take a week or more to dissolve the hard protective shell with just her enzymes alone.”

By looking at reproduction as both a source of cooperation and conflict between the sexes, the researchers are finding clues from this study on a behavioral and molecular level that can be an important link for solving certain unexplained causes of human infertility. 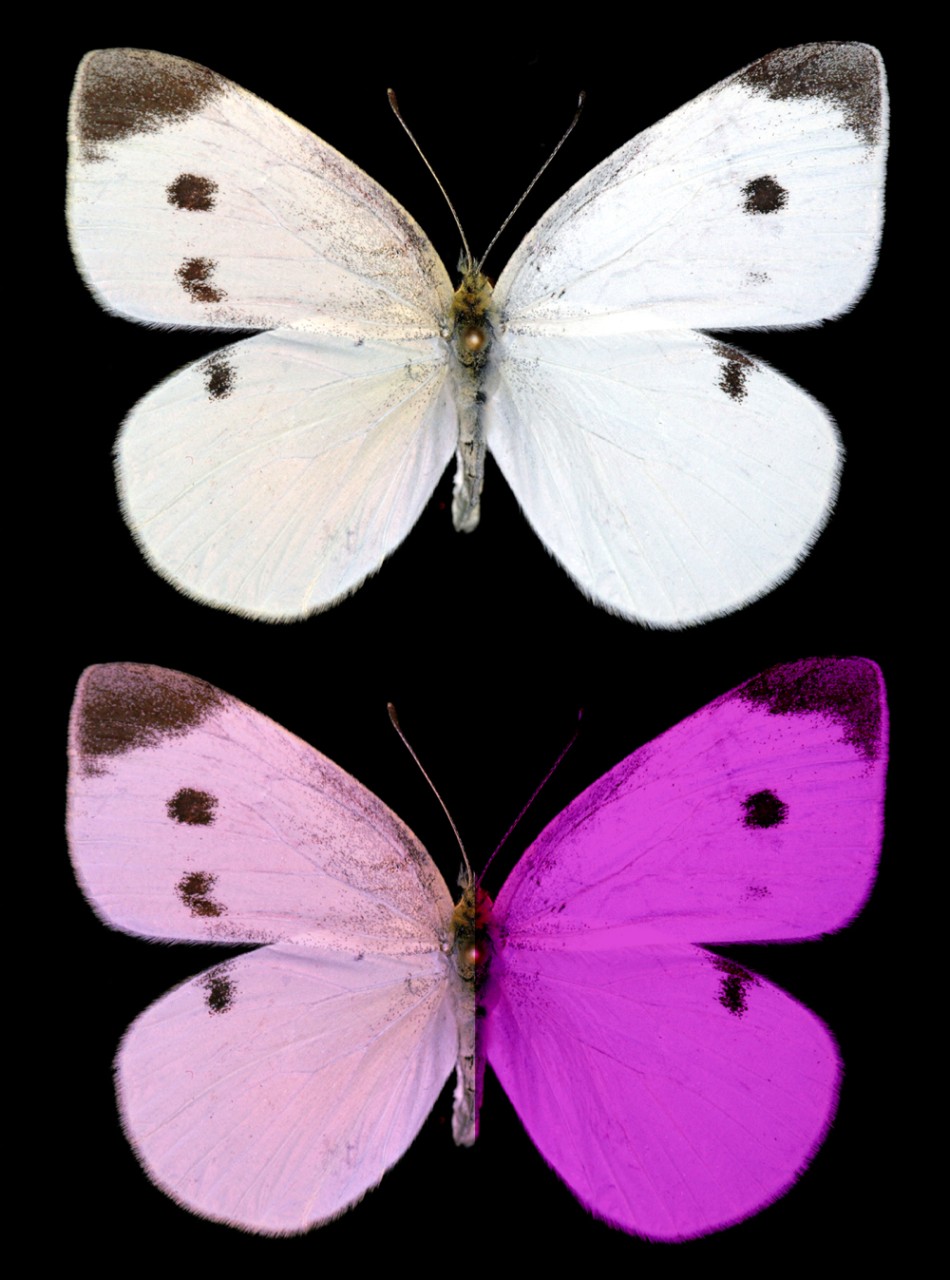 “Purple Reigns” - The mostly white wings of the cabbage white absorb a lot of ultraviolet light that humans cannot pick up (top) but butterflies can see clearly (bottom). Their sophisticated visual systems can see lavender hues on the wings of the females and bold violet on the wings of the males. Females know the brighter the violet, the more his nutrient package is rich in proteins. 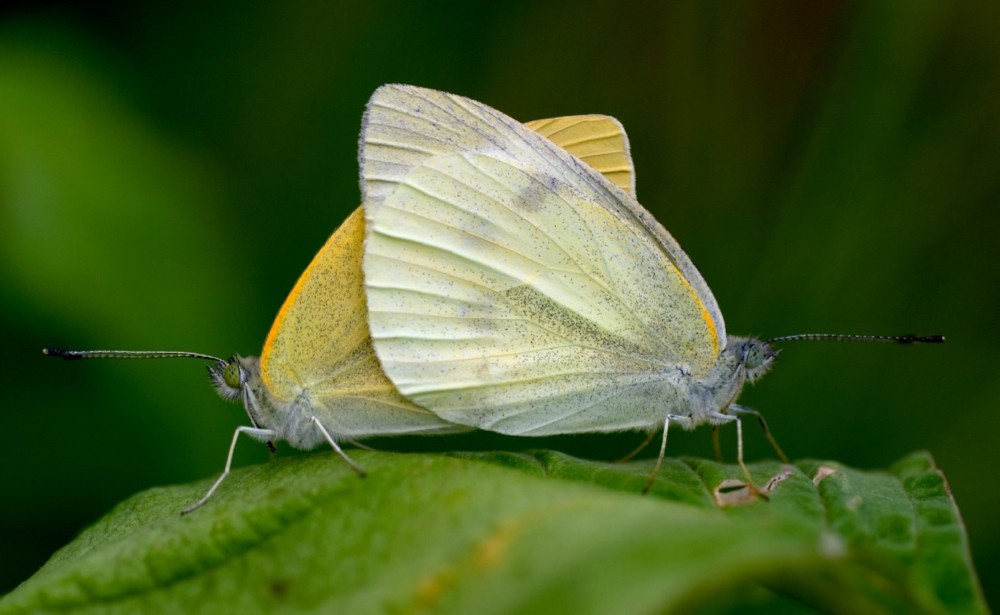 “Reproduction is a very interesting social interface where males and females have a conversation,” says Morehouse. “That conversation often begins with courtship, but doesn’t stop after mating happens.

“It becomes a negotiation between the molecules of both sexes for the shared goal of producing offspring.”

As the researchers understand incompatibilities between butterflies on a molecular level, they plan to track how these creatures evolve and develop certain enzymes and proteins to solve this tug of war.

Morehouse and Clark hope new findings eventually unlock some of the mysteries of human infertility that exist on a similar stage between male seminal fluids and female reproductive enzymes.

“These cabbage white butterflies are one of the most common butterflies in the world and very common in Cincinnati,” says Morehouse.

“There is magic all around us and the lovely thing about science is that sometimes clues that might actually help with health issues like human infertility can come from a butterfly in your own backyard.” “Structural complexity and molecular heterogeneity of a butterfly ejaculate reflect a complex history of selection,”  in the June issue of the journal Proceedings of the National Academy of Sciences.

Interested in wildlife? Apply to UC's undergraduate biological sciences program or explore other programs on the undergraduate or graduate level.