How do blind cavefish find their way?

A UC biology study suggests it's all in their bones.

Imagine living in perpetual darkness in an alien world where you have to find food quickly by feel or starve for months at a time.

The limestone caverns of Mexico’s Sierra del Abra Tanchipa rainforest contain deep cisterns cloaked in utter blackness. This is where researchers at the University of Cincinnati traveled to find a little fish (Astyanax mexicanus) that has evolved to feast or endure famine entombed hundreds of feet below the ground.

“They have been able to invade this really extreme environment. They are exposed to darkness their entire life yet they’re able to survive and thrive,” said Amanda Powers, a UC graduate student and lead author of a study on blind cavefish published in May in the journal PLOS One.

“They’ve evolved changes to their metabolism and skull structure. They’ve enhanced their sensory systems. And they can survive in an environment where not many animals could,” she said. 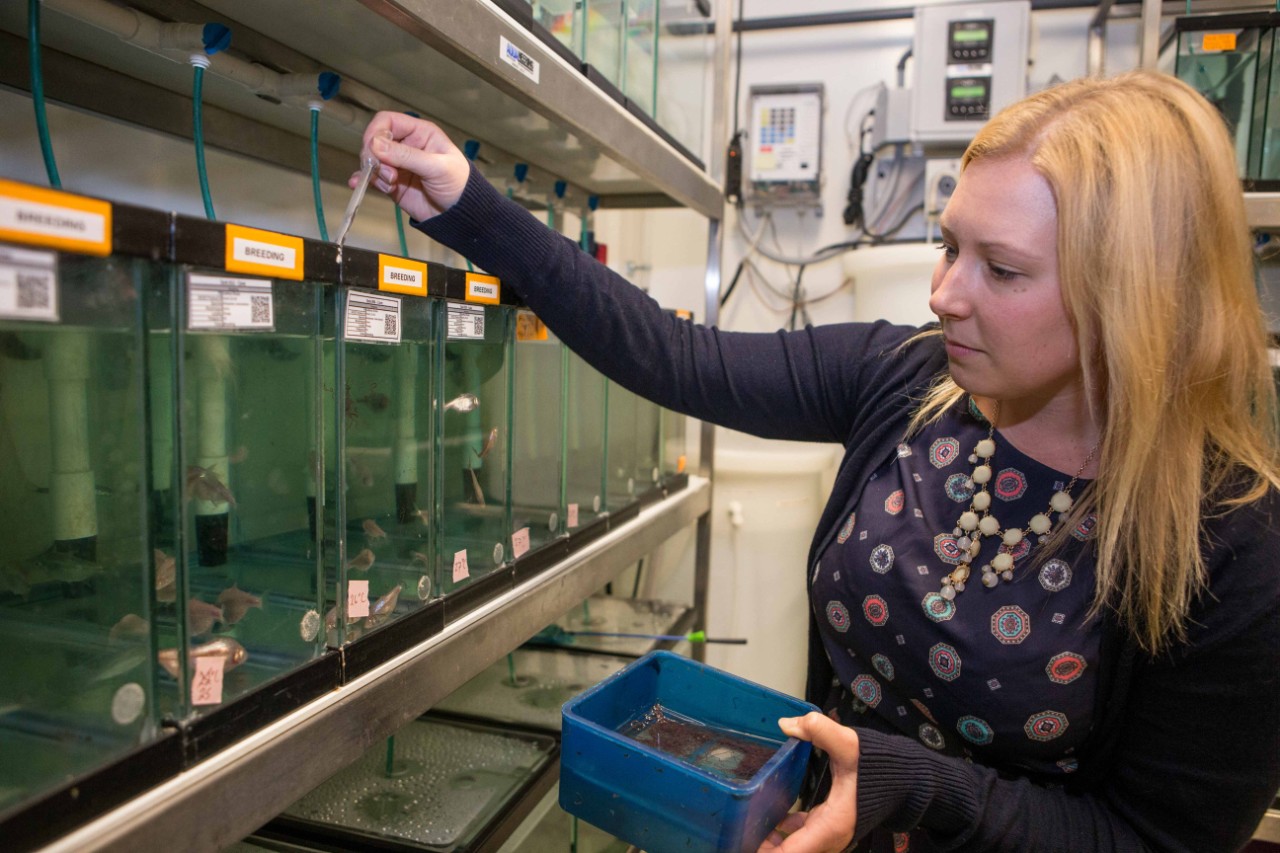 Mexican cavefish are bizarre, not merely blind but born with eyes that regress until they are completely lost as adults. The bones of their once-round eye orbits have collapsed. In place of eyes, their empty sockets store fat deposits that are covered in the same silvery, nearly translucent scales as the rest of their pale, unpigmented bodies.

The UC study examined one biological adaptation that might help to explain how these fish navigate and find food without benefit of sight — asymmetry. Researchers examined juvenile and adult cavefish to understand how their skulls change during their lives.

Most fish are symmetrical — their left and right sides are virtually identical and streamlined to provide the most efficient locomotion in the water.

“It’s a mystery how they’ve been able to adapt. The amazing thing is that they’re not just barely surviving — they thrive in total darkness.”

Cavefish are genetically similar to their symmetrical and keen-sighted cousins, Mexican tetras, found in nearby creeks and rivers on the surface. They’re so closely related that they easily interbreed and produce fertile young, even though the two species are believed to have diverged millions of years ago.

Cavefish start their lives with symmetrical features like other fish. But when they mature, their fragmented cranial bones harden in a visibly skewed direction, the study found.

UC’s researchers speculate that this adaptation helps the typically left-leaning cavefish navigate by using sensory organs called neuromasts to follow the contours of the cave as they swim in a perpetual counterclockwise pattern. This behavior was observed among captive cavefish, which keep moving around the edges of their tanks while surface fish tend to stay motionless in the shadows of their tank or swim in haphazard ways.

“That was a real big piece of the puzzle for us,” said Joshua Gross, a UC biology professor and co-author. “It’s a mystery how they’ve been able to adapt. The amazing thing is that they’re not just barely surviving — they thrive in total darkness.”

Gross has been studying cavefish for years at UC. They make an excellent model to examine regressive evolution, the process by which animals lose features over generations, he said.

“The traits they’ve lost are very conspicuous — their eyes, their pigmentation,” Gross said. “The beauty of studying cave animals is it’s a very robust model for understanding why features are lost, and it’s a simple, stable set of environmental pressures that cause those features to go away.”

Cave-dwelling animals as diverse as salamanders and crayfish have responded similarly by losing pigment and eyesight while gaining or augmenting other sensory structures.

“The fact that they’re all moving in the same evolutionary direction is not a coincidence. They’re all living in total darkness with a limited food supply,” he said.

Cavefish are especially valuable for evolutionary study, Gross said, because of their genetic relationship with readily abundant surface fish. Many antecedents of other cave-dwelling animals have been lost to extinction from natural selection or calamity. 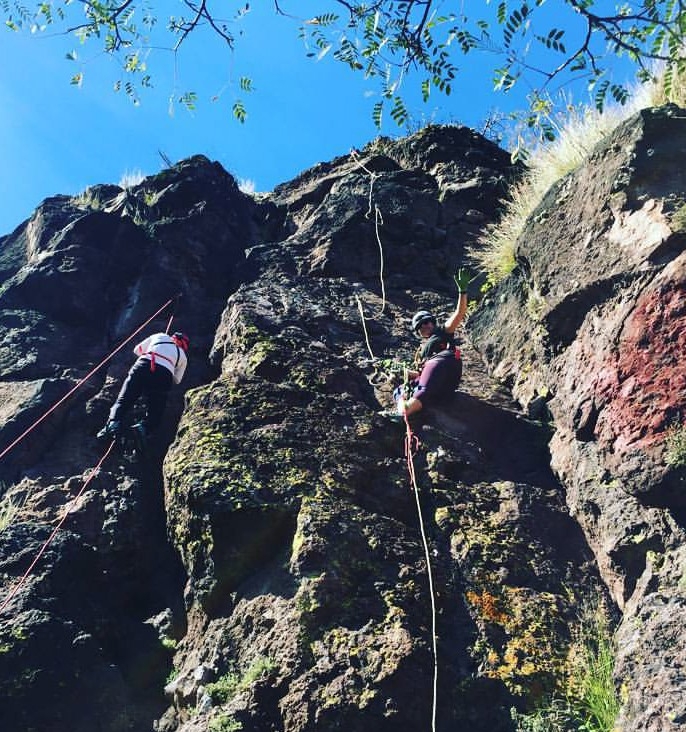 UC students sharpen their rock-climbing skills on a Mexican cliff to prepare for a caving expedition. (Photos provided by Amanda Powers.) 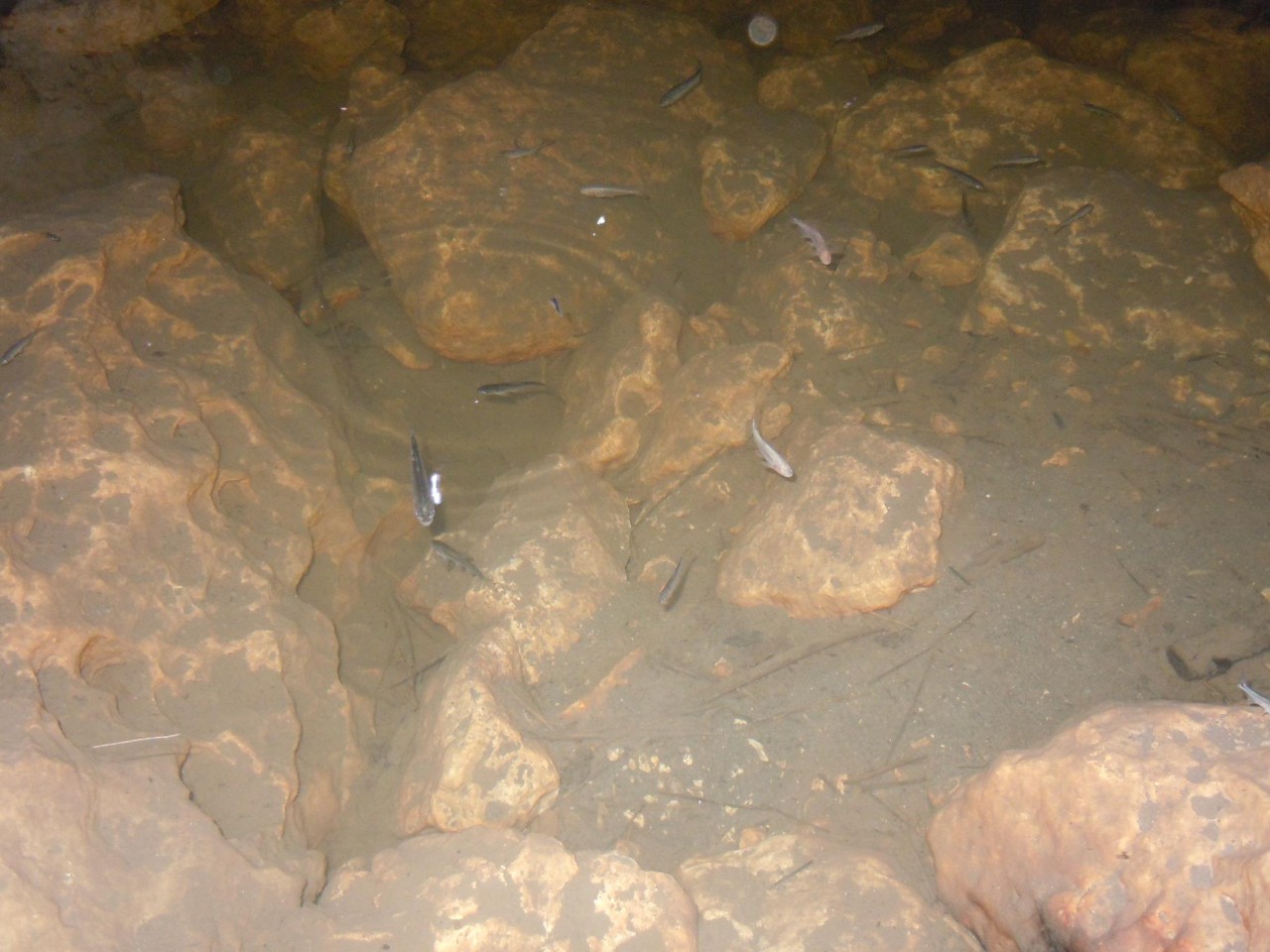 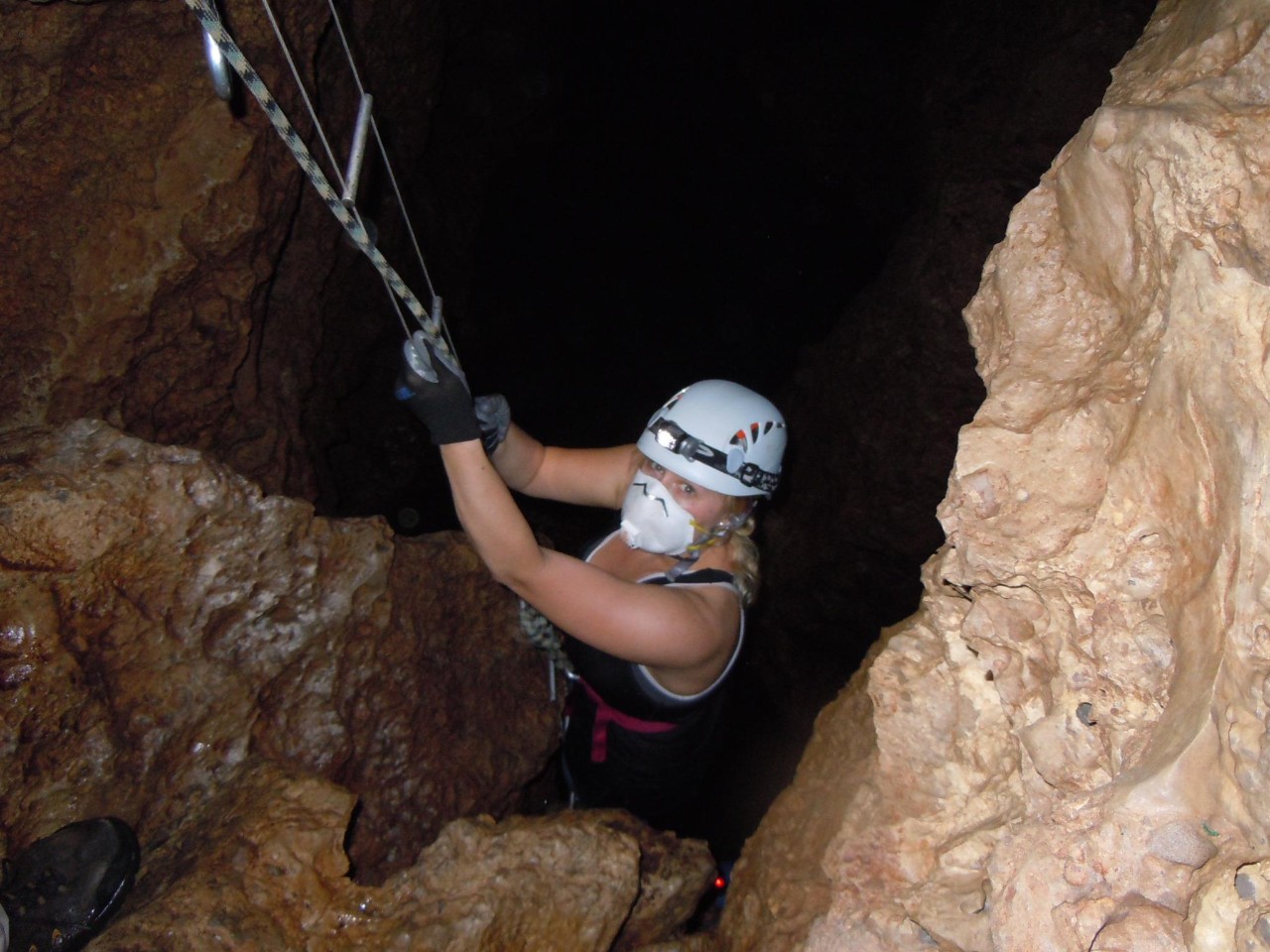 UC biology student Amanda Powers wears a dust mask to protect her lungs from fungal disease while looking for cavefish in a cavern in Sierra del Abra Tanchipa.

"Whenever you would touch the surface of the water with your finger, a swarm of cavefish would come right up to it. These cavefish have zero predators so they’re not afraid. That was a really cool experience.”

The UC biology lab has dozens of aquariums and breeding tanks full of cave and surface fish, each smaller than a goldfish. Researchers use QR-code stickers to keep track of the family history of the resident fish swimming in slow circles.

The hardy fish are easy to keep because they are not picky eaters. They get a mix of foods including flakes, brine shrimp and blackworms. UC gets its study fish from natural populations maintained by colleagues and reputable breeders.

“Our lab really tries to avoid taking any animals from nature,” Gross said.

Mexican cavefish also are raised as a popular aquarium pet.

The skulls of all but a couple cavefish UC studied bend to the left. They seem to be right-finned, swimming in a lazy counterclockwise pattern around their aquariums in the biology lab.

“You could see how asymmetry might be an advantage in navigation,” Powers said.

“They tend to swim in a unidirectional, circular motion around their tanks to explore their surroundings,” she said. “Having asymmetry in their skull we think is attributed to handedness. If their skull is bent to the left, they could be ‘right-handed.’ They’re feeling the wall to the right with their sensory structures.”

This kind of asymmetry is uncommon in nature. Think of the fiddler crab with its outsized claw. Owls have asymmetrical ears — one canal placed higher on the skull than the other — perhaps to help the night predators target the faint rustling of a mouse in the dark.

The interesting genetic combinations occur in the second generation or F2 population of hybridization, he said.

“You can capture the genetic diversity of the entire population,” Kaplan said. “Some fish look exactly like surface fish. Others look exactly like cavefish. Then you’ll have intermittent phenotypes. Some are pale but have eyes while others will have no eyes but are fully pigmented.”

A micro CT scan shows differences in bone structure between a surface fish, left, and a cavefish. The eye orbit has collapsed and the jaws are more pronounced in the cavefish, among other differences. 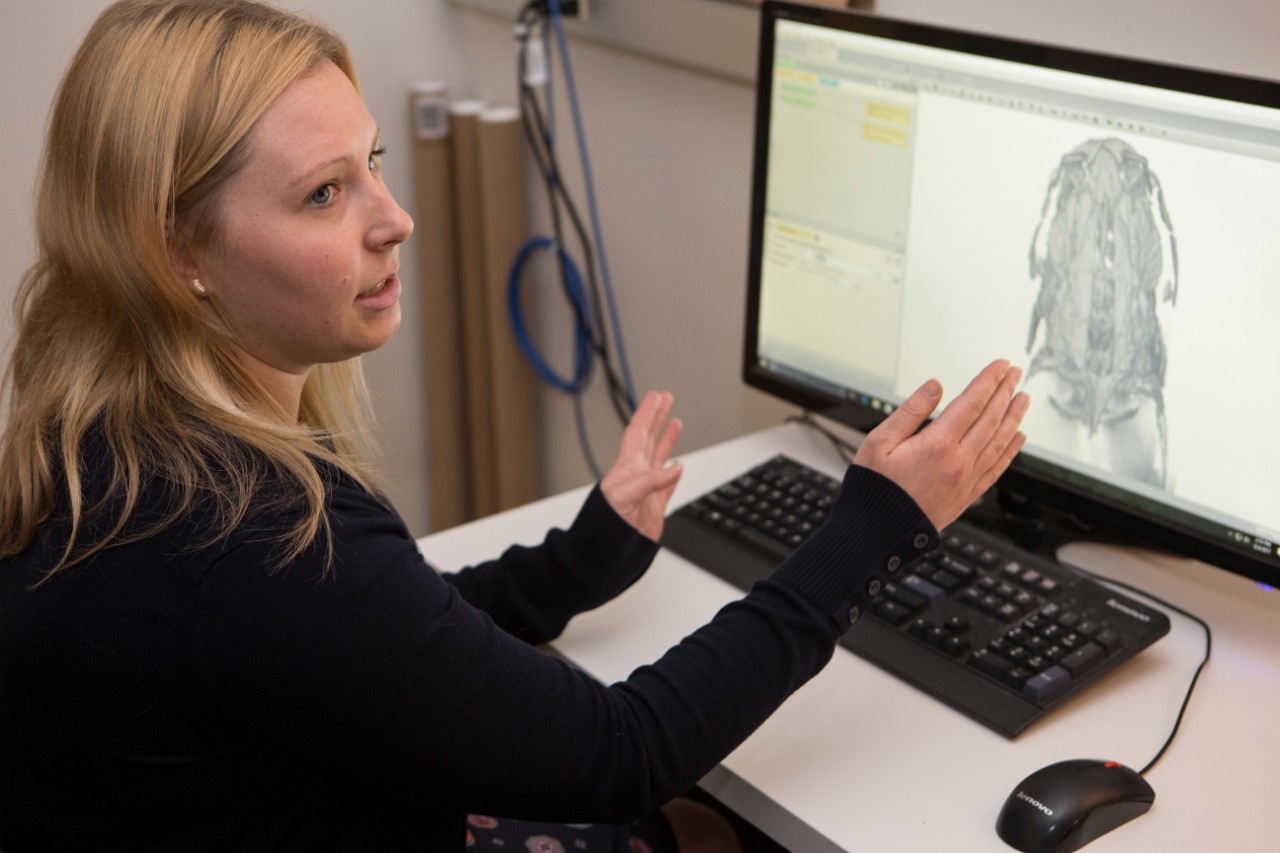 UC student Amanda Powers pulls up a micro CT scan of a cavefish to show how its bones are slighly oriented to the left in an unusual example of asymmetry.

Powers traveled with Gross to Mexico in 2013, in 2015 and again this year to study wild cavefish. They wore dust masks to guard against fungal spores associated with the respiratory disease histoplasmosis, which can be found in bat guano. Getting to the fish pools required a little spelunking.

“The group ahead of us disturbed some bats. As we were coming in, bats were going out,” she said. “They have incredible echo-location. The bats knew where you were and would fly around you in the darkness, even though it was a very small chamber.”

The cave had several distinct pools, each farther from the entrance. The deeper they went, the fewer surface-dwelling fish they found until they found only blind cavefish.

“Whenever you would touch the surface of the water with your finger, a swarm of cavefish would come right up to it,” Powers said. “Not many fish would do that. These cavefish have zero predators so they’re not afraid. That was a really cool experience.”

Kaplan said it would be worthwhile to explore the cavefish’s DNA to find out what prompts the asymmetry in adult cavefish.

“We haven’t yet delved into why it’s happening. I’d love to get more into the genetics and developmental processes that lead to these bizarre phenotypes,” Kaplan said.

Gross said his biology lab will continue to pursue these and other questions about this fascinating fish that has mastered a dark, subterranean realm, indifferent to the bright, colorful and chaotic world above it. 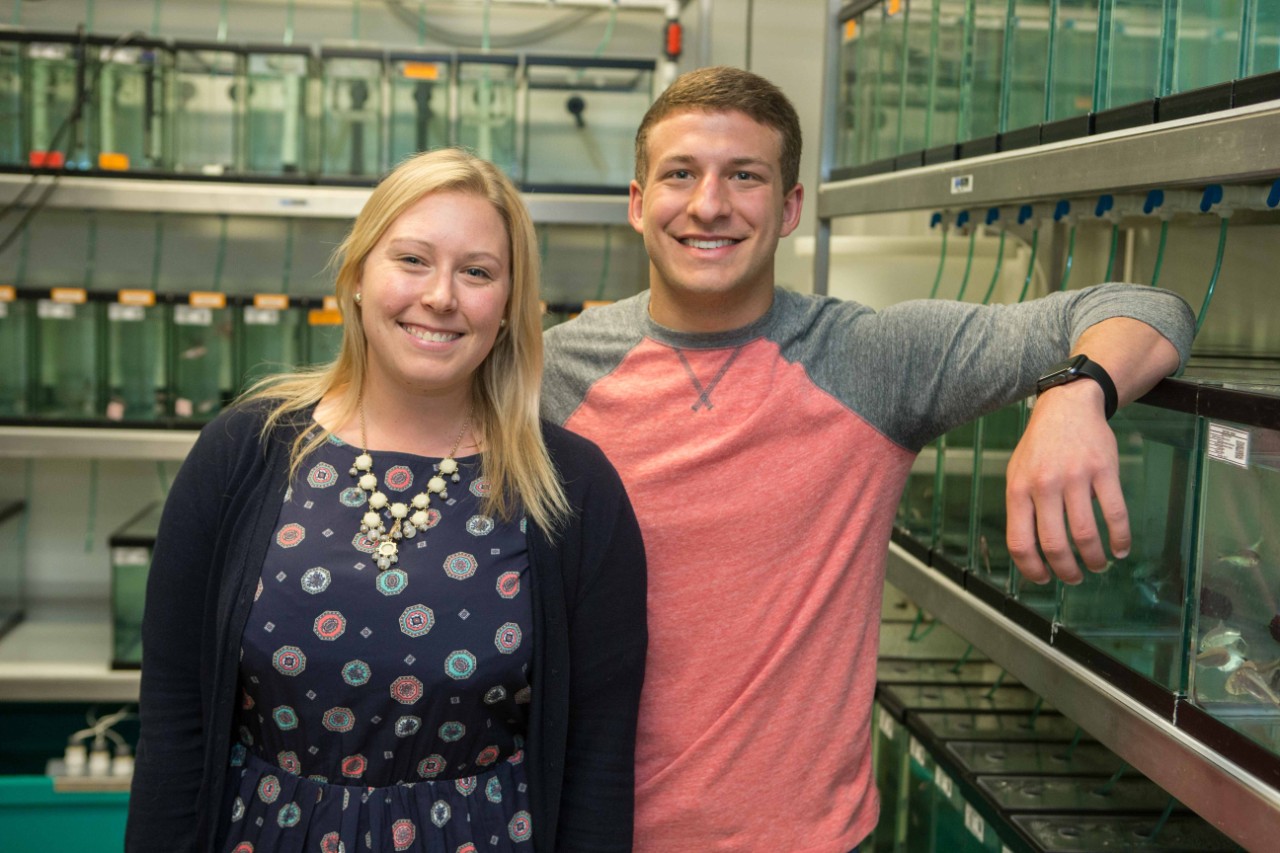 Do you like biology? At UC, students conduct field research to answer questions about the living world. Apply to the Department of Biology or explore other programs on the undergraduate or graduate level.