UC archaeologist Alan Sullivan is challenging the idea that prehistoric people in the Southwest subsisted on maize. Instead, his research suggests they set ground fires to promote wild foods.

Conventional wisdom holds that prehistoric villagers planted corn, and lots of it, to survive the dry and hostile conditions of the American Southwest.

But University of Cincinnati archaeology professor Alan Sullivan is challenging that long-standing idea, arguing instead that people routinely burned the understory of forests to grow wild crops 1,000 years ago.

“There has been this orthodoxy about the importance of corn,” said Sullivan, director of graduate studies in UC’s Department of Anthropology in the McMicken College of Arts and Sciences. “It’s been widely considered that prehistoric peoples of Arizona between A.D. 900 to 1200 were dependent on it.

“But if corn is lurking out there in the Grand Canyon, it’s hiding successfully because we’ve looked all over and haven’t found it.” 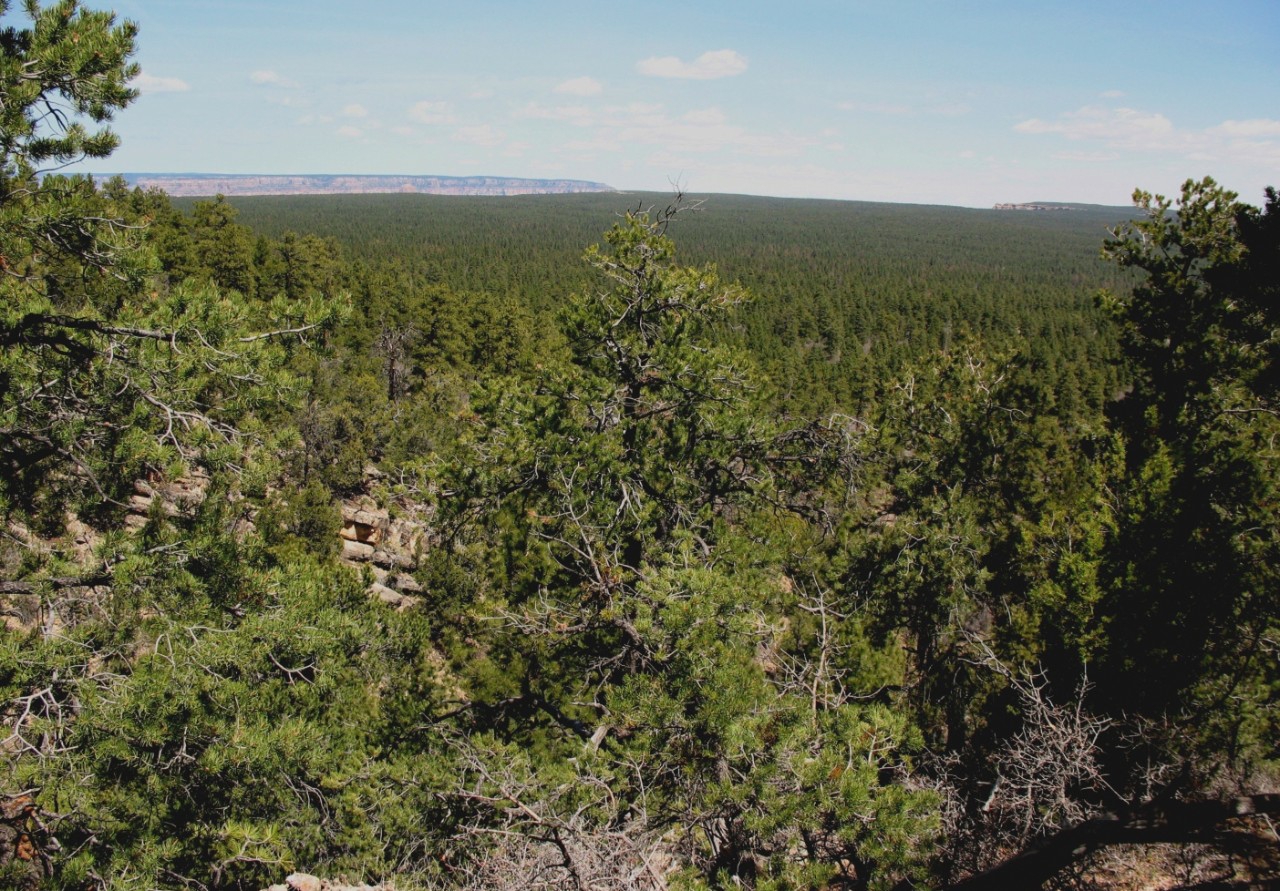 UC archaeologist Alan Sullivan has spent more than 30 years studying the people who lived in and around the Grand Canyon more than 1,000 years ago. (photo/Alan Sullivan) 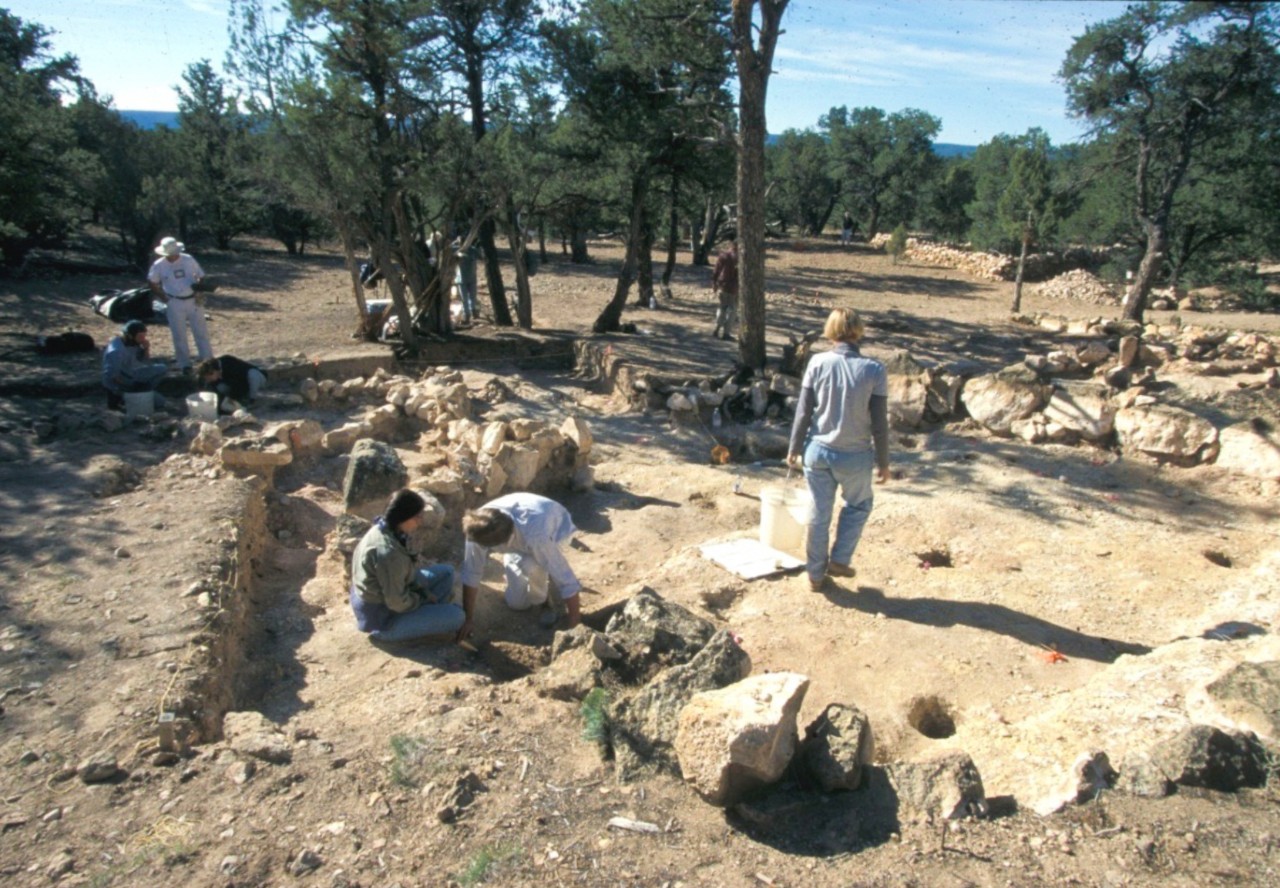 UC students work at many archaeological sites outside Grand Canyon National Park where they have found evidence of prehistoric civilization. (photo/Alan Sullivan)

Sullivan has published a dozen papers outlining the scarce evidence of corn agriculture at more than 2,000 sites where they have found pottery sherds and other artifacts of prehistoric human settlement. He summarized his findings in a presentation last month at Boston University.

When you think of the Grand Canyon, you might picture rocky cliffs and desert vistas. But the Upper Basin, where Sullivan and his students work, is home to mature forests of juniper and pinyon trees stretching as far as you can see, he said.

“When you look down into the Grand Canyon, you don’t see any forest. But on either rim there are deep, dense forests,” he said.

“It’s a fascinating idea. It’s been well documented that Native Americans burned the forest in other parts of the country. I see no reason why they wouldn’t have been doing the same thing 1,000 years ago.” 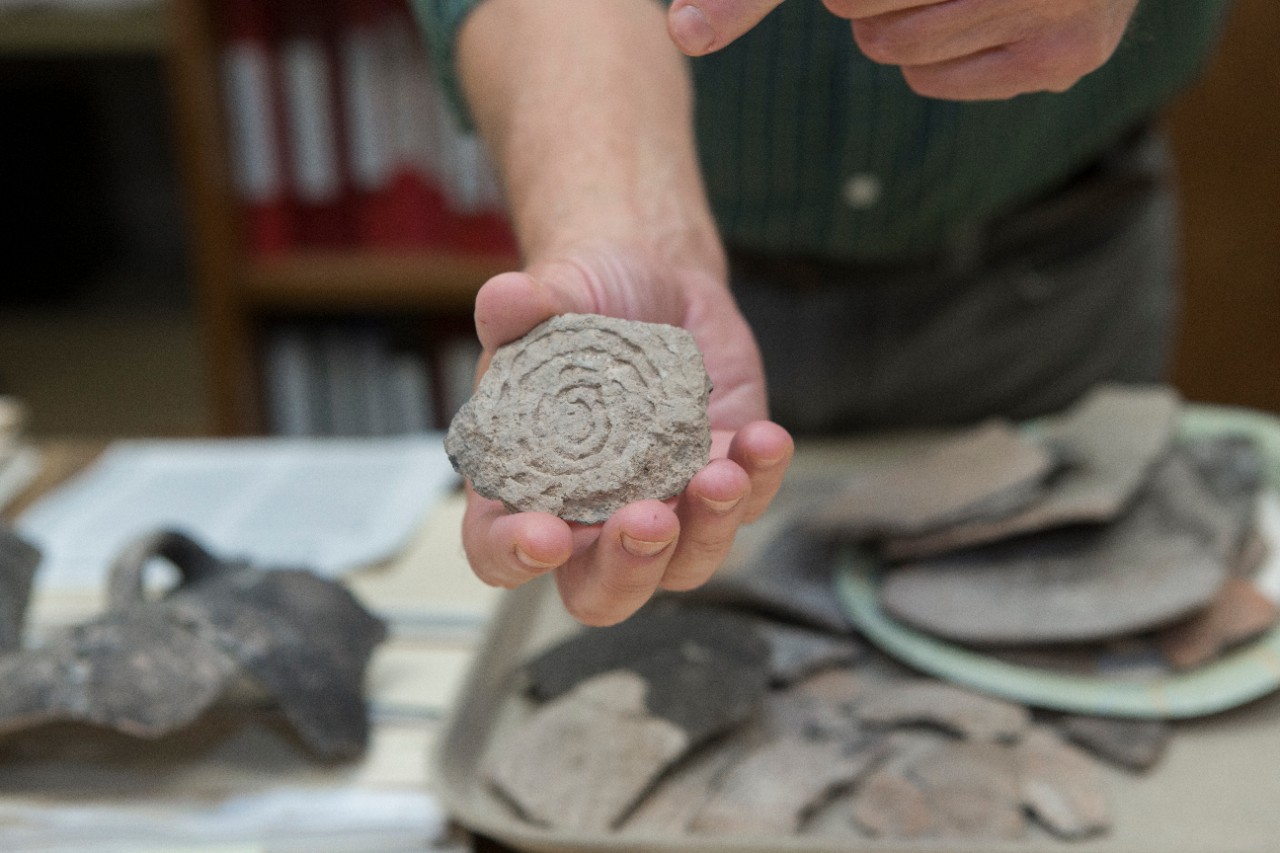 On these high-elevation plateaus, Sullivan and his students have unearthed ceramic jugs adorned with corrugated patterns and other evidence of prehistoric life. Sullivan is particularly interested in the cultural and social practices of growing, sharing and eating food, also called a foodway.

“What would constitute evidence of a corn-based foodway?” he asked. “And if experts agree it should look like this but we don’t find evidence of it, that would seem to be a problem for that model.”

Like a detective, Sullivan has pieced together clues firsthand and from scientific analysis to make a persuasive argument that people used fire to promote the growth of edible leaves, seeds and nuts of plants such as amaranth and chenopodium, wild relatives of quinoa. These plants are called “ruderals,” which are the first to grow in a forest disturbed by fire or clear-cutting.

“It’s definitely a paradigm-threatening opinion,” Sullivan said. “It’s not based on wild speculation. It’s evidence-based theorizing. It has taken us about 30 years to get to the point where we can confidently conclude this.”

“If corn is lurking out there in the Grand Canyon, it’s hiding successfully because we’ve looked all over and haven’t found it.” 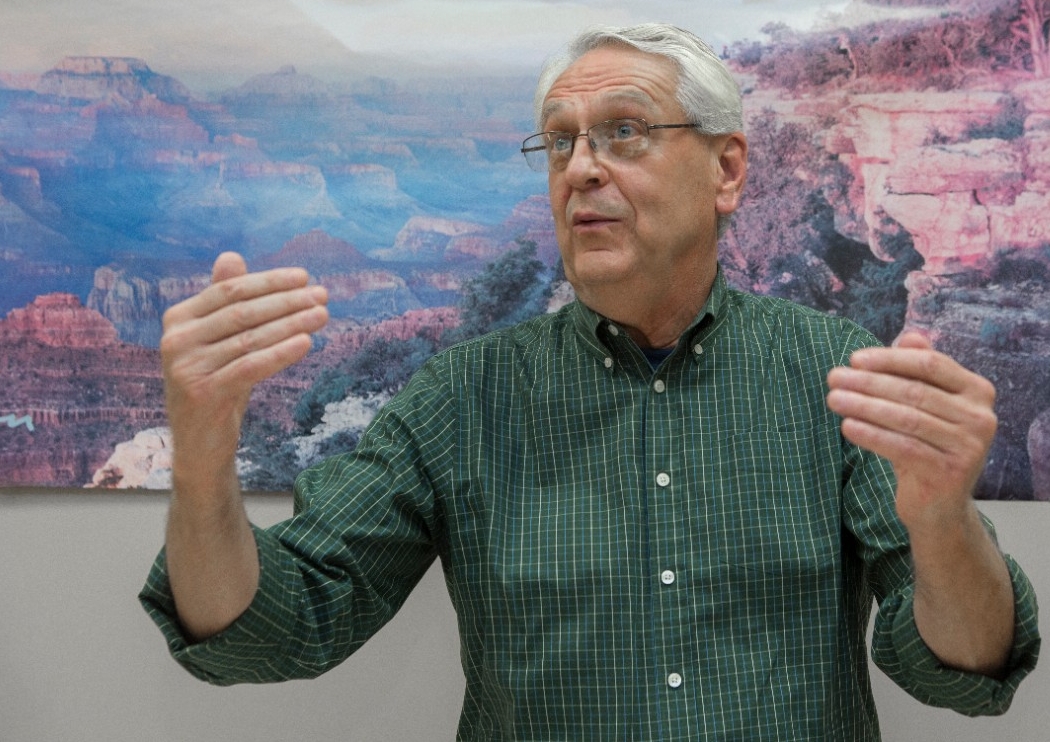 Lab analysis identified ancient pollen from dirt inside clay pots that were used 1,000 years ago before Sullivan and his students found them.

“They’ve identified 6,000 or 7,000 pollen grains and only six [grains] were corn. Everything  else is dominated by these ruderals,” Sullivan said.

The corn itself looked nothing like the hearty ears of sweet corn people enjoy at barbecues today. The ears were puny, about one-third the size of a typical cob, with tiny, hard kernels, Sullivan said.

So if prehistoric people were not growing corn, what were they eating? Sullivan found clues around his excavation sites that people set fires big enough to burn away the understory of grasses and weeds but small enough not to harm the pinyon and juniper trees, important sources of calorie-rich nuts and berries.

Evidence for this theory was found in ancient trees. Raging wildfires leave burn scars in growth rings of surviving trees. In the absence of frequent small fires, forests would accumulate vast amounts of underbrush and fallen timber to create conditions ripe for an inferno sparked by a lightning strike. But examinations of ancient juniper and ponderosa pine trees found no burn scars, suggesting big fires are a relatively new phenomenon in Arizona.

“To me that confirms there weren’t massive fires back then,” Sullivan said. 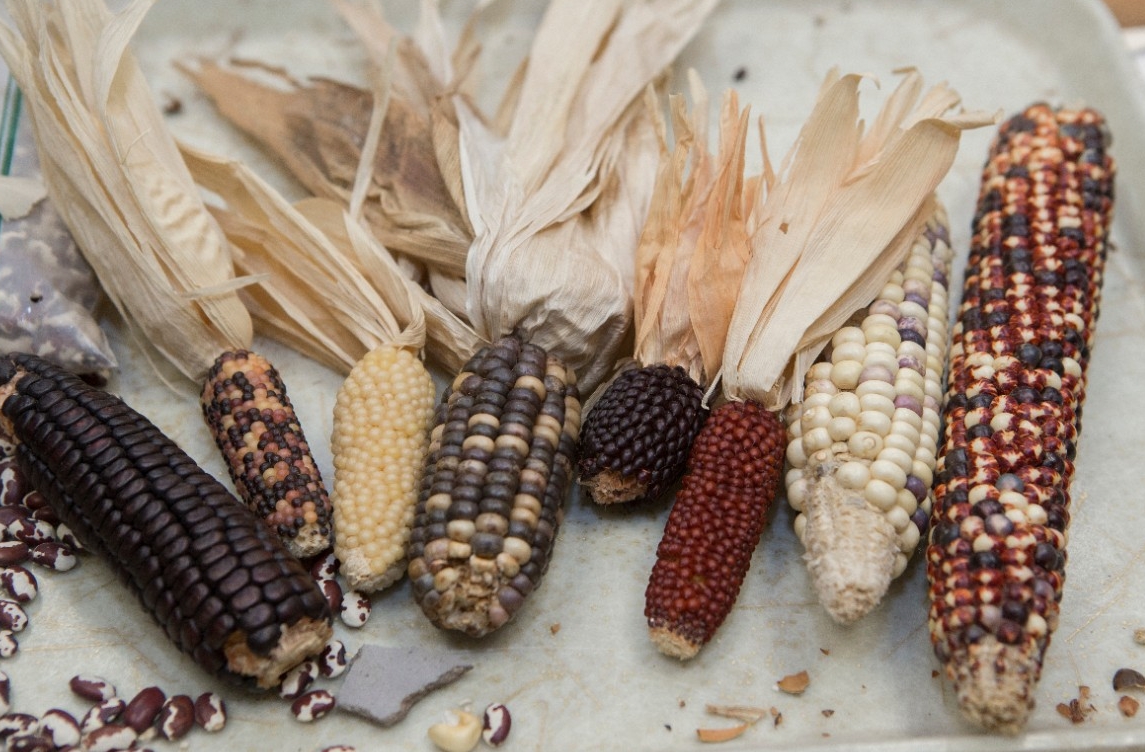 Species of corn found in the American Southwest.

But it was only this year that Sullivan found contemporary evidence supporting his theory that prehistoric people generated a spring bounty by setting fires. Sullivan returned to the Grand Canyon last spring to examine forest destroyed by a massive 2016 fire. Touched off by a lightning strike, the blaze called the Scott Fire laid waste to 2,660 acres of pines, junipers and sagebrush.

“This burned area was covered in ruderals. Just covered,” he said. “That to us was confirmation of our theory. Our argument is there’s this dormant seed bed that is activated by any kind of fire.”

Archaeologists with the National Park Service have found evidence that corn grew below the rim of the Grand Canyon, said Ellen Brennan, cultural resource program manager for the national park.

“It does appear that the ancient people of the Grand Canyon never pursued corn agriculture to the extent that other ancestral Puebloan peoples did in other parts of the Southwest,” Brennan said. “In the Grand Canyon, it appears that there continued to be persistent use of native plants as a primary food source rather than corn.”

The National Park Service has not examined whether prehistoric people used fire to improve growing conditions for native plants. But given what is known about cultures at the time, it is likely they did, Brennan said.

“These forests are unnatural. They have not had any major fires in them in decades. The fuel loads have built up to the point where you get a little ignition source and the fire is catastrophic in ways that they rarely were in the past. Foresters call it 'the wicked problem.'”

The first assumptions about what daily life was like in the Southwest 1,000 years ago came from more recent observations of Native Americans such as the Hopi, said Neil Weintraub, archaeologist for Kaibab National Forest. He worked alongside Sullivan at some of the sites in the Upper Basin.

“Corn is still a big part of the Hopi culture. A lot of dances they do are about water and the fertility of corn,” he said. “The Hopi are seen as the descending groups of Puebloan.”

While native peoples elsewhere in the Southwest no doubt relied on corn, Weintraub said, Sullivan’s work has convinced him that residents of the Upper Basin relied on wild food — and used fire to cultivate it.

“It’s a fascinating idea because we really see that these people were highly mobile. On the margins where it’s very dry we think they were taking advantage of different parts of the landscape at different times of the year,” Weintraub said.

“It’s been well documented that Native Americans burned the forest in other parts of the country. I see no reason why they wouldn’t have been doing the same thing 1,000 years ago,” he said.

The area around the Grand Canyon is especially dry, going many weeks without rain. Still, life persists. Weintraub said the forest generates a surprising bounty of food if you know where to look. Some years, the pinyon trees produce a bumper crop of tasty, nutritious nuts.

“In a good year, we didn’t need to bring lunch in the field when we were out at our archaeological surveys. We’d be cracking pinyons all day,” Weintraub said.

“Goosefoot has a minty smell to it, especially in the fall. We actually started chewing on it. It was pretty pleasant,” Weintraub said. “It’s a high-nutrient food. I’d be curious to know more about how native peoples processed it for food.” 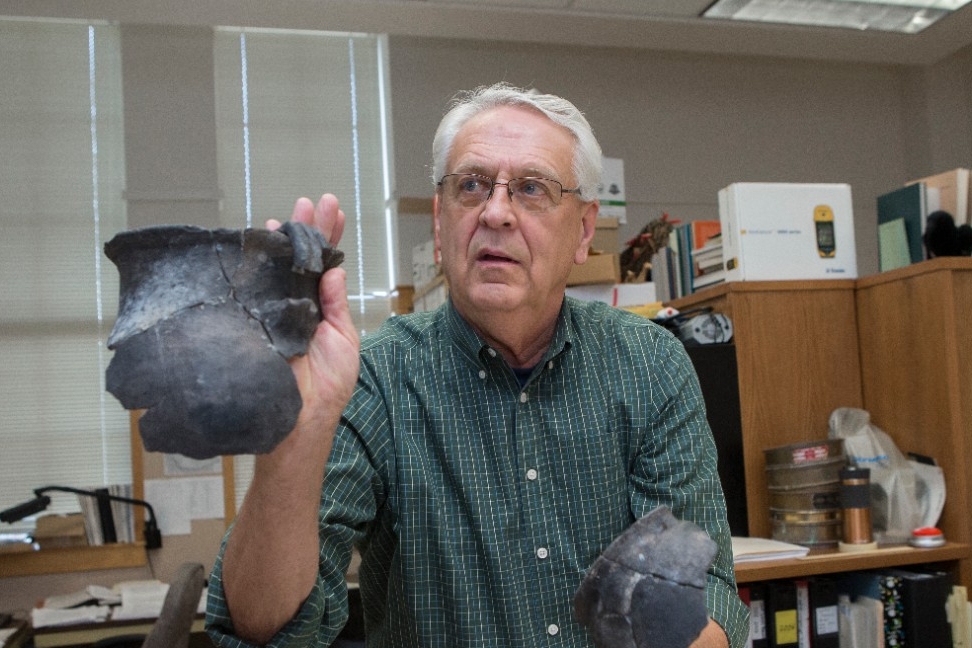 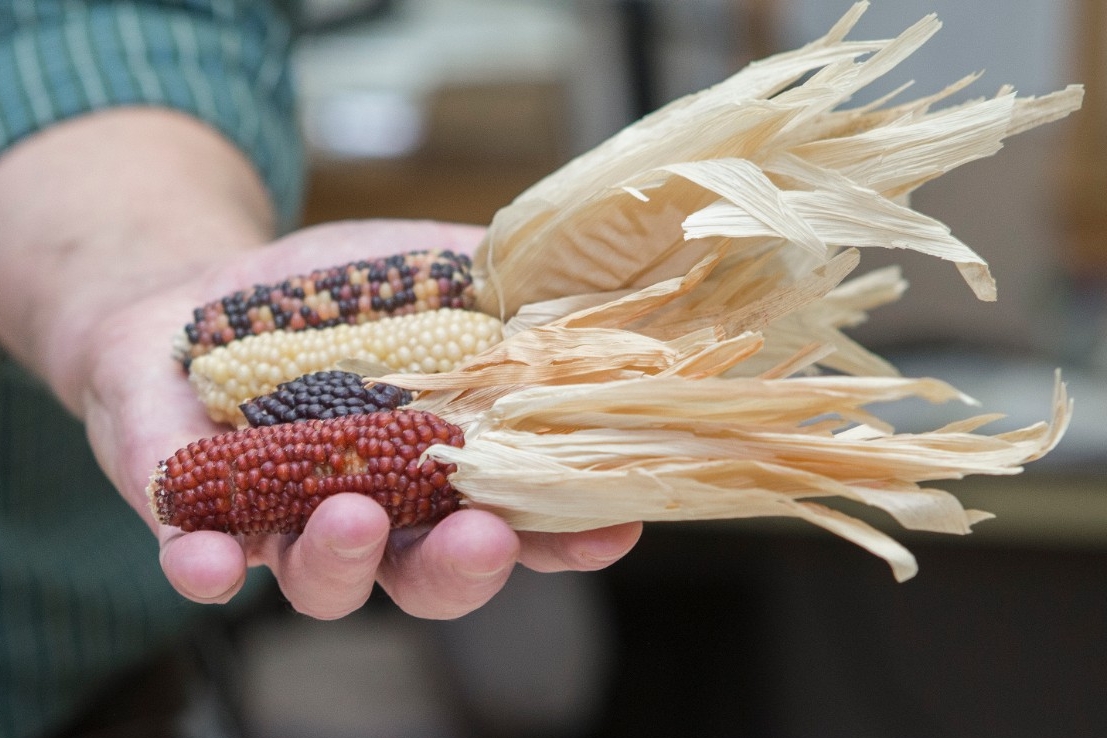 UC’s Sullivan said this prehistoric land management can teach us lessons today, especially when it comes to preventing devastating fires.

“Foresters call it ‘the wicked problem.’ All of our forests are anthropogenic [man-made] because of fire suppression and fire exclusion,” Sullivan said.

“These forests are unnatural. They’re alien to the planet. They have not had any major fires in them in decades,” he said. “The fuel loads have built up to the point where you get a little ignition source and the fire is catastrophic in ways that they rarely were in the past.”

The National Park Service often lets fires burn in natural areas when they do not threaten people or property. But increasingly people are building homes and businesses adjacent to or within forests. Forest managers are reluctant to conduct controlled burning so close to population, Sullivan said.

Eventually so much dry wood builds up that a dropped cigarette or unattended campfire can lead to devastating fires such as the 2016 blaze that killed 14 people and destroyed 11,000 acres in the Great Smoky Mountains or the fires in California this year that killed 40 people and caused an estimated $1 billion in property damage.

“It’s a chronic problem. How do you fix it?” he asked. “The U.S. Forest Service has experimented with different methods: prescribed burning, which creates a lot of irritating smoke, or thinning the forest, which creates a disposal problem.”

“That is one measure of how devastating our management of fire has been to these forests,” he said. “These fire-responsive plants have basically disappeared from the landscape. Species diversity in some cases has collapsed.” 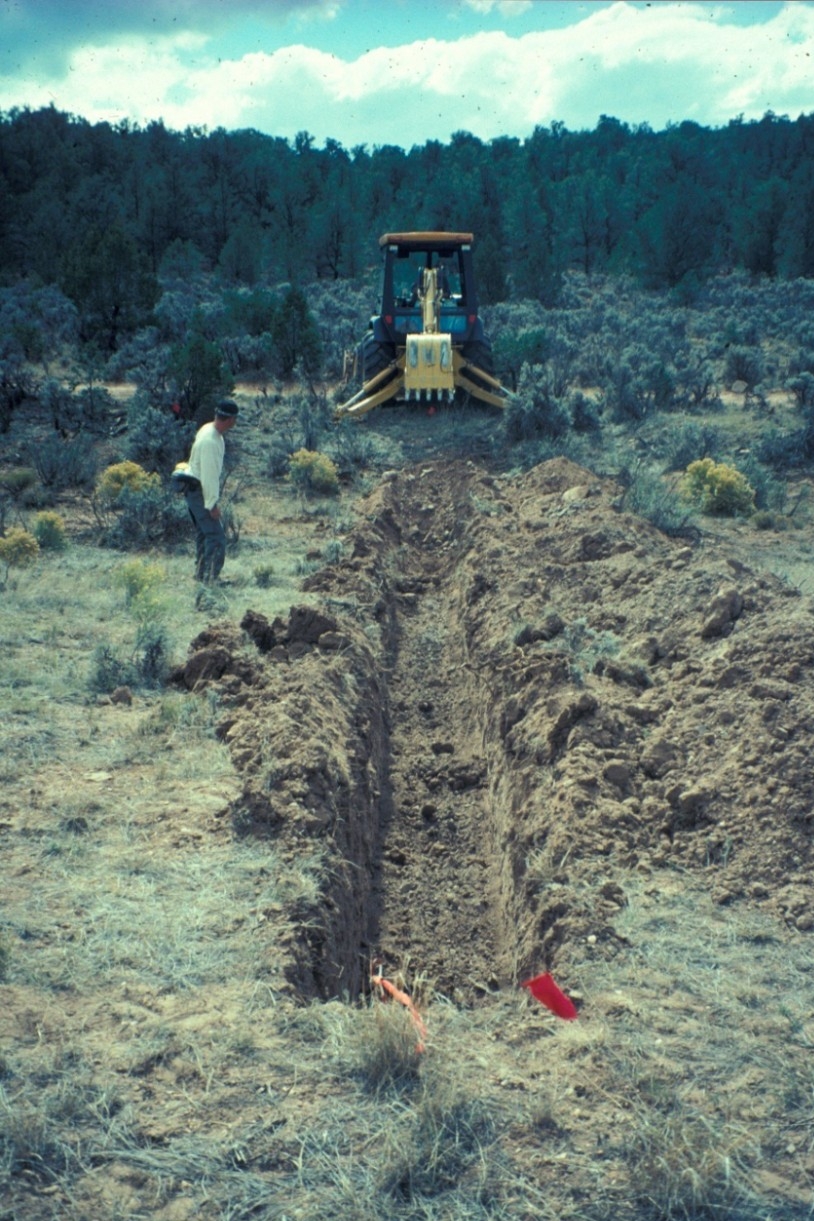 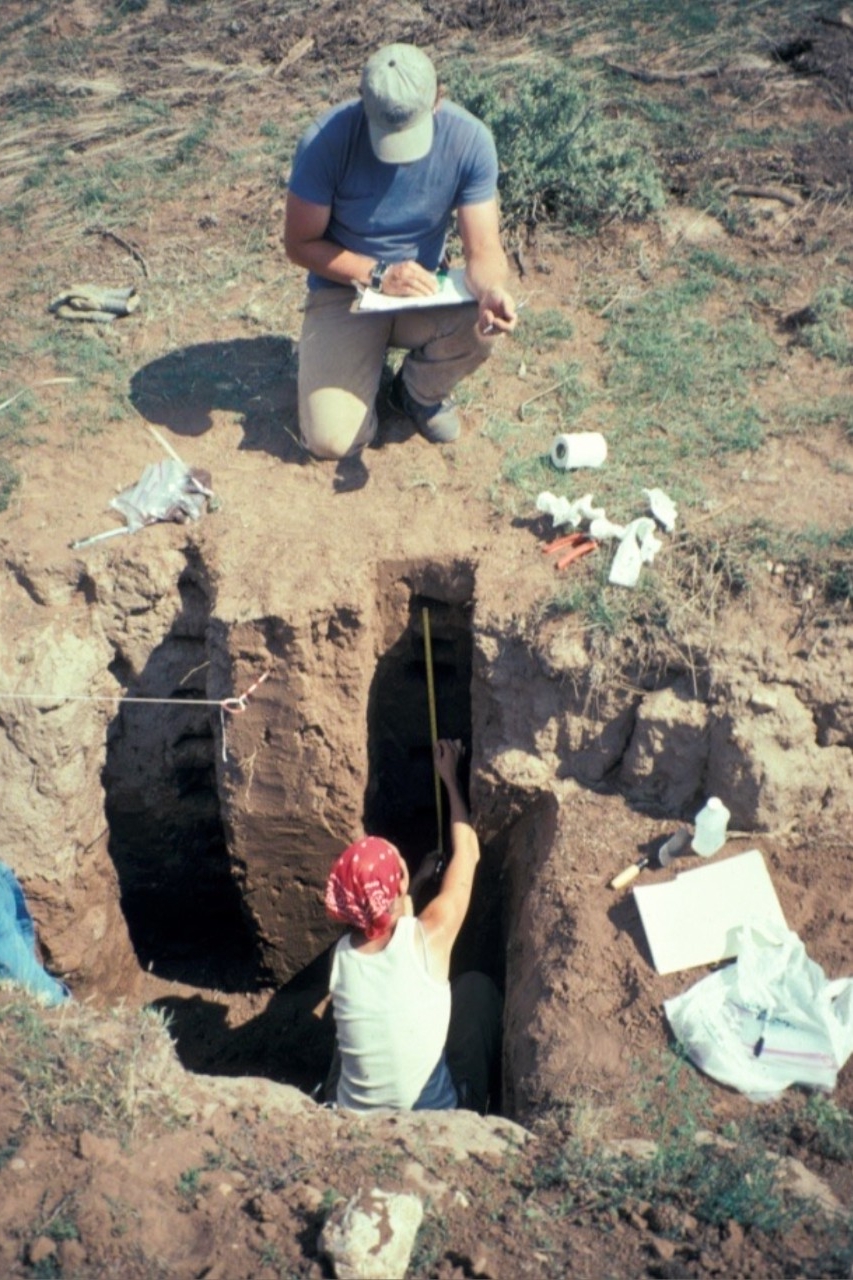 Today, federal land managers conduct controlled burns when practical to address this problem, even in national parks such as the Grand Canyon.

“The fire management program for Grand Canyon National Park seeks to reintroduce fire as a natural agent of the environment,” the park’s Brennan said. “That is to reduce ground fuels through prescribed fire, mechanical thinning, and wildland fire.”

Scientists also are studying how to adjust forest management techniques in the face of climate change, she said.

“Program managers are working to understand how climate change affects forest management and how to restore forests to the point where fire can follow a more natural return interval given a particular forest type,” she said.

Climate change is expected to make wildfires more frequent and severe with rising temperatures and lower humidity. Meanwhile, public lands are under increasing pressure from private interests such as tourism and mining, putting more people at potential risk from fire, Sullivan said.

“Rather than create more uranium mines or establish more tourist cities in our forests, it’s better to spend our money on addressing ‘the wicked problem,’” Sullivan said. “Unless we solve that, all of these other ventures will only add to the severity of the risks.” 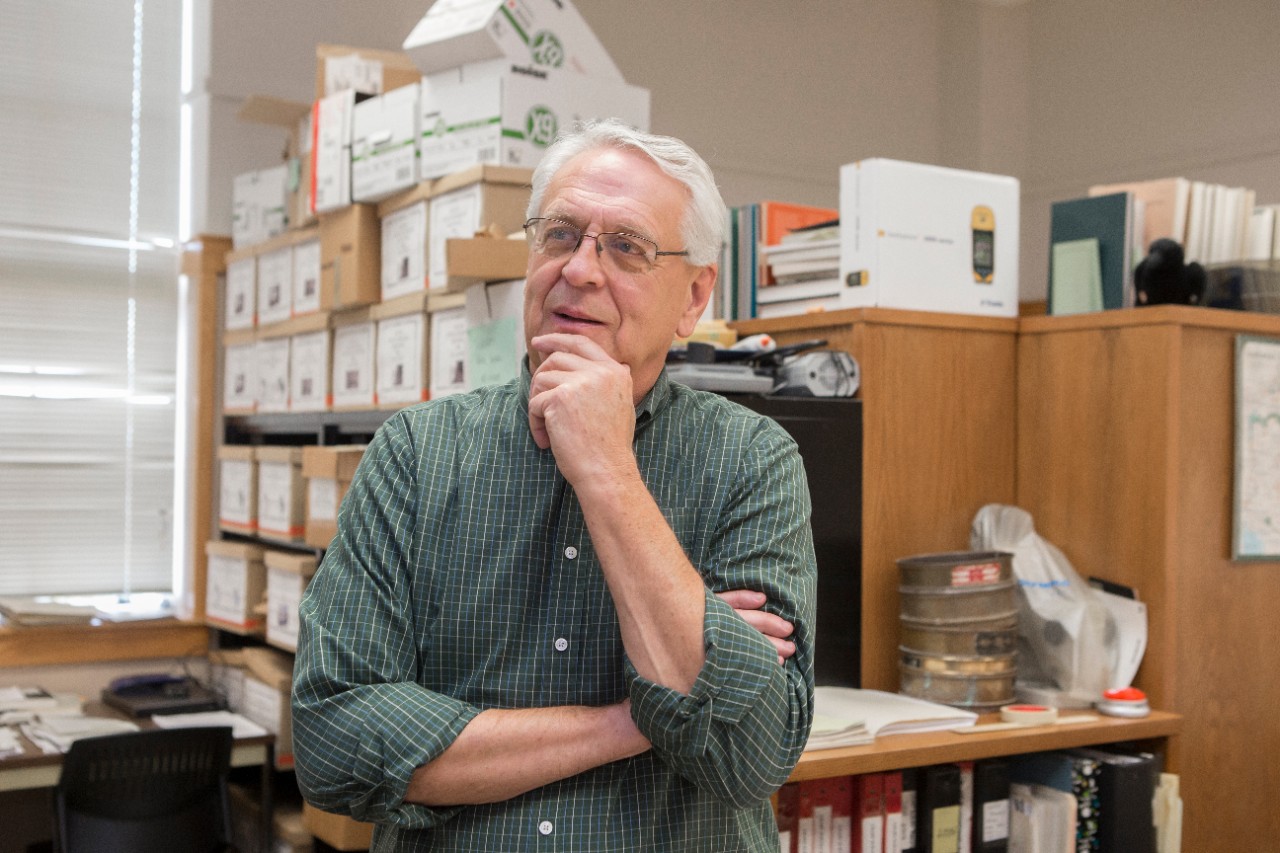 UC professor Alan Sullivan, pictured in his office in the Department of Anthropology, has spent more than 30 years studying the prehistoric peoples of the Southwest.

Do you like field research? At UC, anthropology students get hands-on experience in their chosen subject area. Check out the Department of Anthropology or explore other programs on the undergraduate or graduate level.