UC biology professor Bruce Jayne's research has helped to explain the unique behaviors and abilities of snakes found all over the world.

Anyone who has sat down to a summer crab feast knows how hard, messy and delicious they are.

But University of Cincinnati biologist Bruce Jayne found some water snakes that specialize in catching and consuming live crabs, without the benefit of mallets, bibs or utensils.

Snakes can’t chew their food so anything they eat must be bite-sized, even if this amuse-bouche sometimes is an antelope. A species of water snake in Malaysia defies this limitation by ripping crabs into manageable bite-sized pieces, Jayne found.

“Tigers can take huge prey. But for most snakes, the limit on prey size is what they can swallow whole,” said Jayne, a professor of biological sciences in UC’s McMicken College of Arts and Sciences. 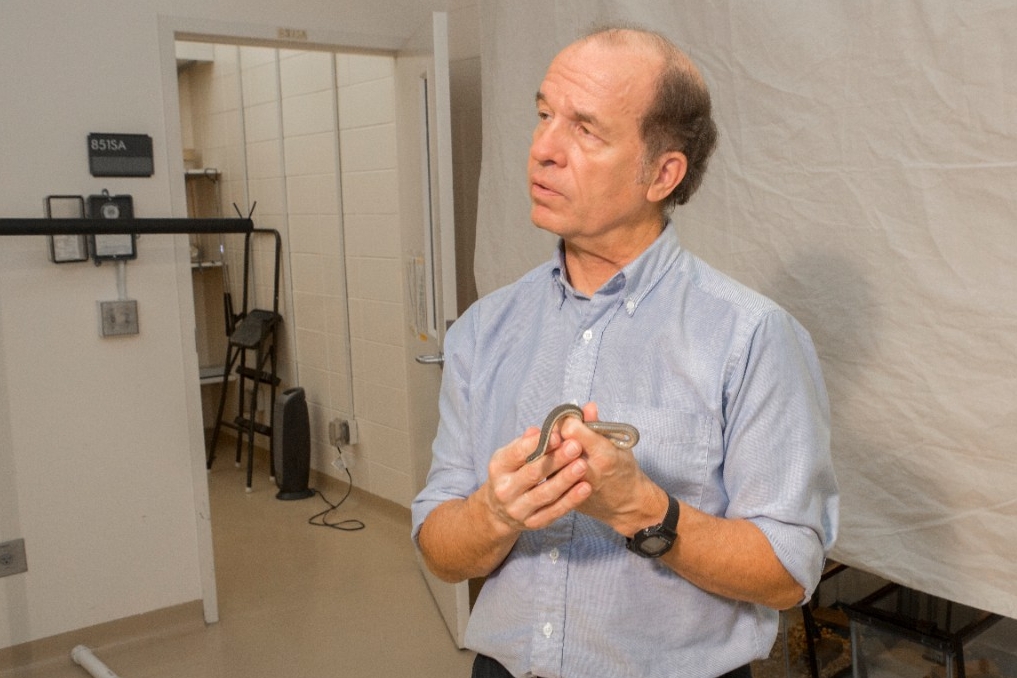 UC biologist Bruce Jayne is applying what he learned about Asian crab-eating snakes to American queen snakes for his next study. 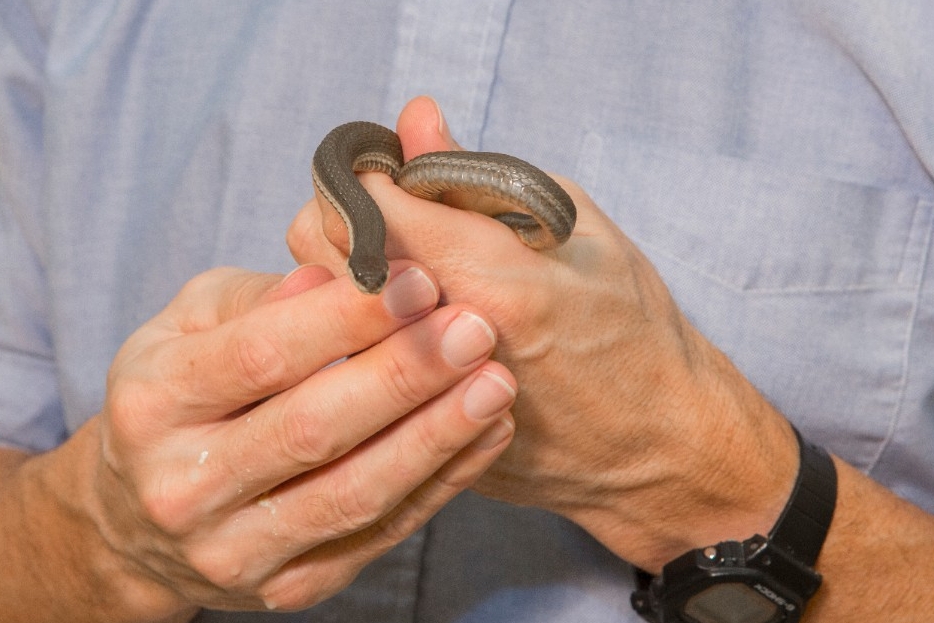 Bruce Jayne holds up a queen snake, which specializes in eating freshly molted or softshell crayfish.

Jayne studies the gape of snake mouths to determine how this physical limitation factors into a snake’s hunting behavior and choice of prey. In his biology lab at UC, Jayne also studies the novel ways these limbless reptiles move.

“These crabs are huge! The legs alone were nearly as big as the snake’s gape. But they can consume the crab by pulling it apart when it’s soft and vulnerable,” Jayne said.

His study was published in late February in the Biological Journal of the Linnean Society. He also presented his findings at the Society for Integrative and Comparative Biology’s conference this year in San Francisco. 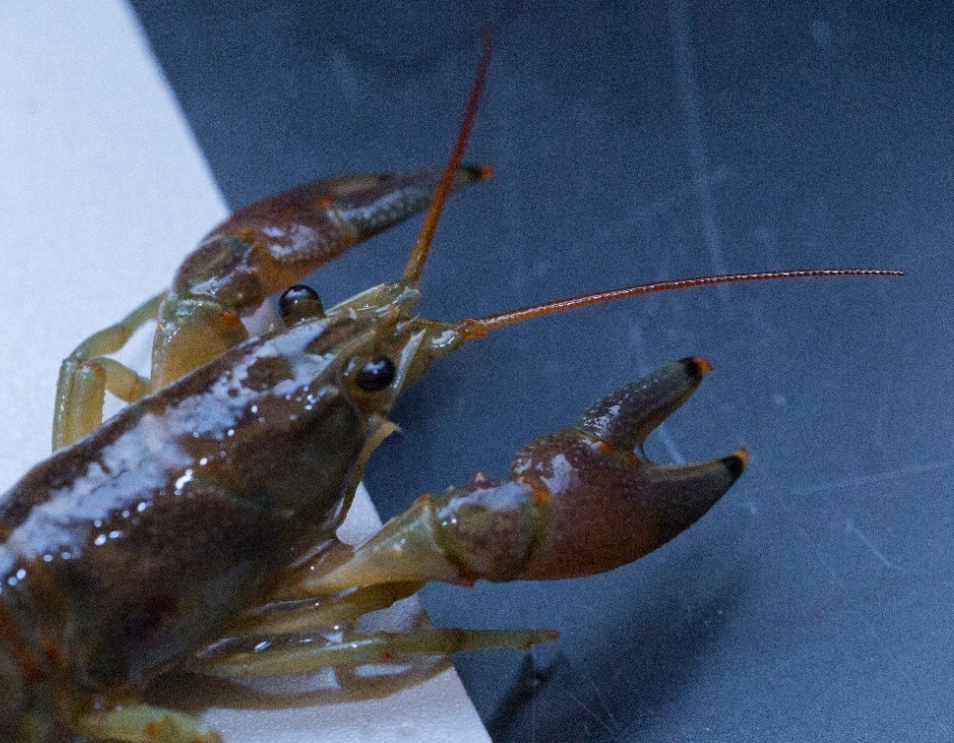 Bobbing for crayfish? Some snakes do just that, according to field research by UC biologists.

Most water snakes eat fish, but a family of snakes called homalopsid eats only crustaceans.

“They’re quite the gourmets,” he said.

Jayne has always been fascinated by reptiles. He co-authored more than 70 studies on snakes or lizards in peer-reviewed journals and has handled venomous species without incident all around the world.

“I have not been bitten, and I intend to keep it that way,” Jayne said. “I do not take chances.”

UC Biology in the News:

National Geographic: This Snake Rips its Prey into Pieces

Newsweek: Watch this Snake Violently Rip Crab to Pieces with its Mouth

The New York Times: How the Snake Pours its Way Across the Ground

London's Daily Mail: The snake that rips its prey apart 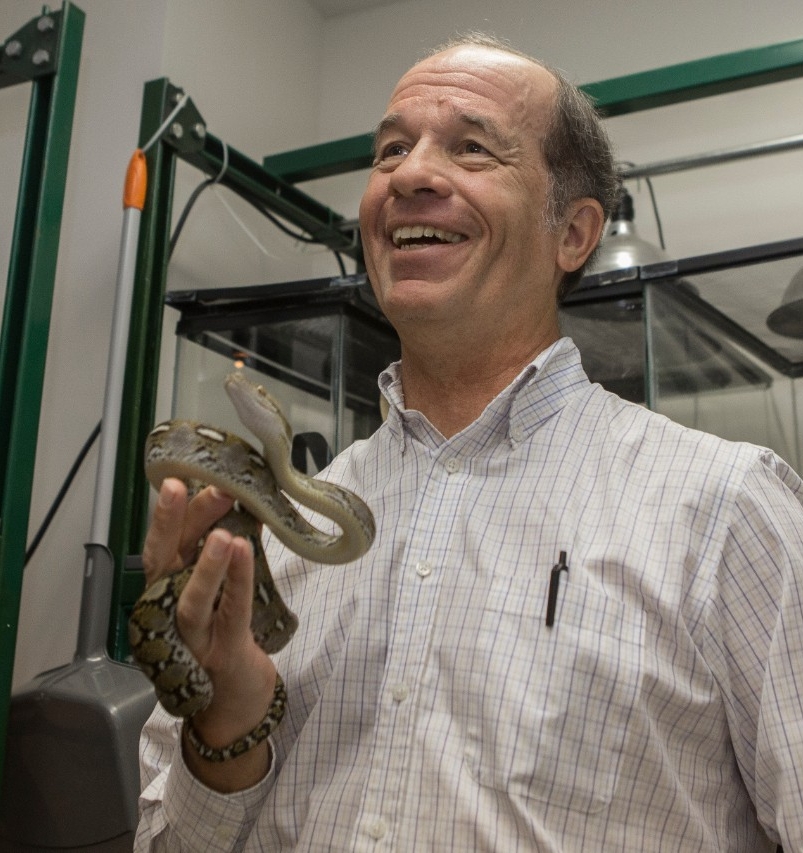 Bruce Jayne with a reticulated python.

Jayne began field research on crustacean-eating snakes in the 1980s through serendipity during his first postdoctoral fellowship at the Field Museum of Natural History in Chicago. He and esteemed snake researcher Harold Voris, now curator emeritus at the museum, had gone to Singapore to conduct a mark-and-recapture study of highly venomous sea snakes, which local fishermen sometimes caught in fishing nets. But late monsoon rains kept the fishing boats tied up at the docks that year.

Field research is fraught with these challenges. Jayne said they had to improvise.

“We thought, ‘What do we do now?’ Frustrated by our bad luck, we were walking along the shore and noticed a lot of homalopsid snakes in the mudflats coming in on the tide,” he said.

Locals sometimes call them mangrove snakes because of the habitat where they are found. And that year they were legion. He and his research partner found one about every meter of shoreline.

“Oddly enough, even though these species were abundant, they were not terribly well-studied,” Jayne said. 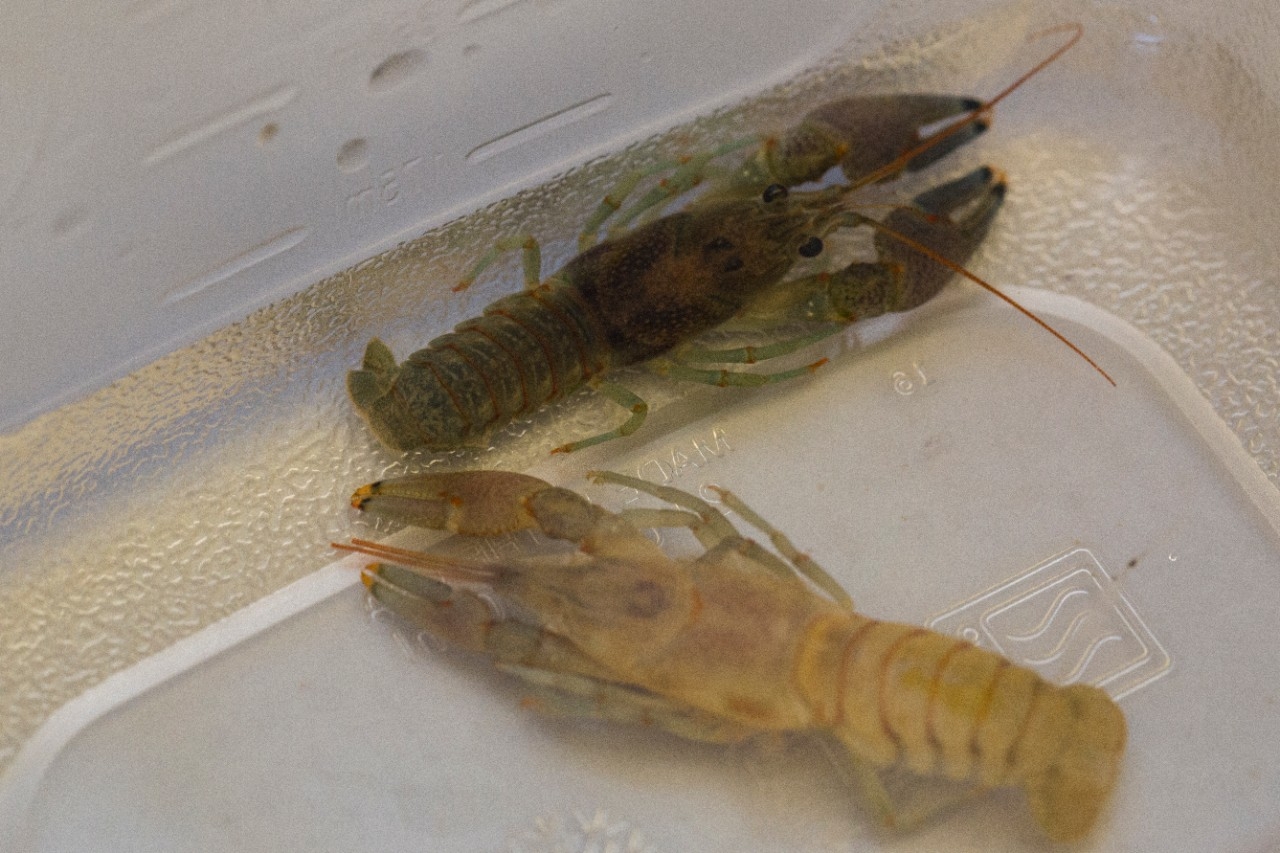 A light-colored crayfish has just molted next to a hardshell crayfish in UC's biology lab. UC biologist Bruce Jayne and his students are studying queen snakes, which eat crayfish that are soft from recently molting.

“Almost nothing was known about the crab-eating snakes,” Voris said. “When you think about it, the mangroves are an extremely productive ecosystem. The crabs maintain high numbers year-round. If snakes can solve the problems of eating crabs, they can exploit this resource. It’s a wonderful system.”

Jayne used night-vision cameras to record their nocturnal hunting techniques, which were specially adapted to their choice in prey.

“It doesn’t always seem like it because we’re learning how things operate, but applied science is at almost every turn in the work we do.” 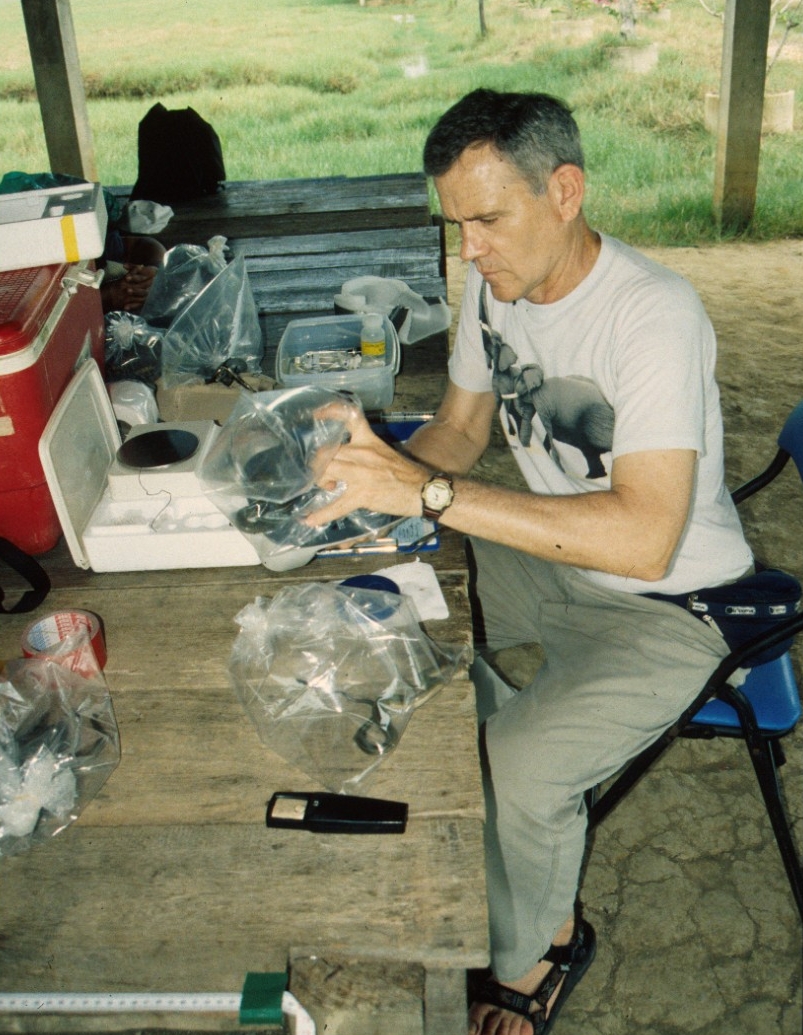 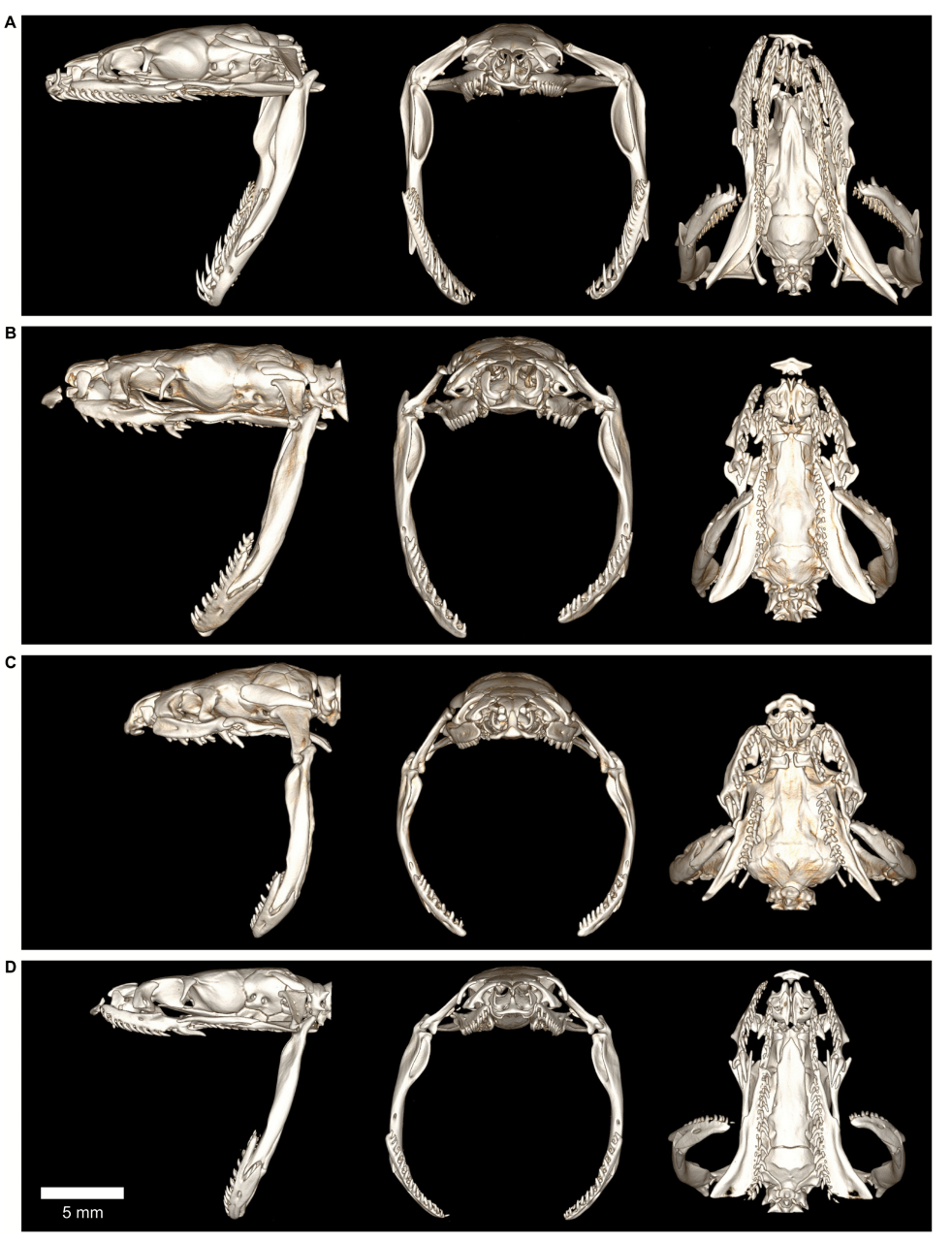 Crabs have hard exoskeletons that they shed periodically as they grow. After shedding, it takes time for their newly exposed exoskeleton to harden into protective armor.

Most snakes have sharp, needlelike teeth that are poorly designed for chewing, Jayne said. Gerarda gets around this limitation by ripping off bite-sized chunks of crab and swallowing the pieces whole.

“That’s one of the nice things about studying anatomy and behavior. You know the evolutionary relationships. You can find some counterintuitive patterns,” Jayne said. “It appears that this specialty in feeding on soft-shelled crustaceans popped up after they were already feeding on hard-shelled crustaceans.”

Jayne used night vision cameras to record the hunting habits of the snakes while doing his field research. He played one of the videos in his office.

“This is a freshly molted crab,” Jayne said. “It’s slimy. They go from being soft and slimy to leathery and ultimately hard.”

“So the snakes only have about a 20-minute window to eat the crab the way they really like them,” he said.

UC biologist Bruce Jayne used an infrared camera to capture the nocturnal hunting behavior of a captive snake (Fordonia leucobalia) while conducting research in Singapore. The snake pinned the crab to the ground with its chin and eventually swallowed it whole.

Still, crabs are not an easy meal. They move quickly both in and out of water. And crabs will eat almost anything, including small snakes, Jayne said.

“Crabs are a dreadful thing to consume for a snake — all these pointy edges and sharp claws,” he said.

So it was not terribly surprising to Jayne that Fordonia, the serpent that specializes in hard-shelled crabs, goes after considerably smaller ones, devouring them legs first from side to side.

“We knew the anatomical limits of what the snake could eat. But as prey gets bigger, how much harder is it to eat?” he asked. “It could be that snakes don’t eat bigger prey because they’re harder to catch.”

“Despite the great diversity of feeding behavior among the world’s 3,000 snakes, it virtually always starts and ends the same way — with an open-mouthed strike and swallowing the prey whole. Even in venomous snakes, they may strike the prey and release it,” Jayne said.

But Fordonia strikes at the crab not with its mouth or fangs but with its chin to pin down the wriggling meal. Then it coils its body around the pinned crab to manipulate and swallow it.

Fordonia’s stomach is tough and resistant to a crab’s sharp points and claws. And horrifyingly, the snakes don’t always kill a crab before swallowing it.

Jayne studied the snakes’ diets by gently prodding their full bellies toward their chins until they coughed up their last meal.

“When we had Fordonia regurgitate the crabs, they were still alive and ran away,” he said.

This discovery refuted previous research that speculated Fordonia crushed its food with its jaws to consume its hard-shelled dinner.

Jayne said he would like to return to Malaysia to investigate a fish-eating water snake that has an enormous tooth at the roof of its mouth that is even bigger than its rear fangs.

“There was nothing to suggest they were eating anything really strange. It was very bizarre,” he said. “They have such weird dentition, there must be something going on.” 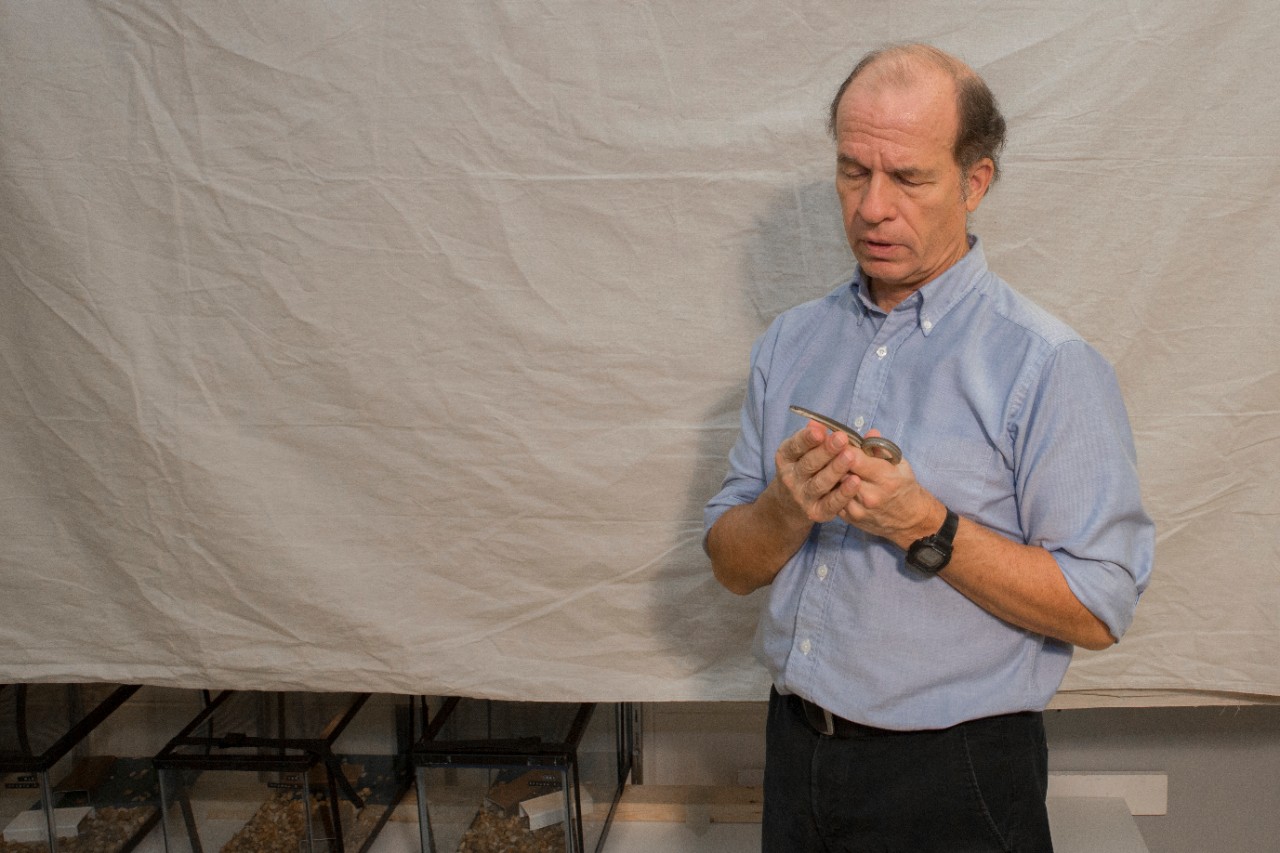 UC biology professor Bruce Jayne holds a queen snake in front of a studio backdrop he uses to record animal locomotion in his lab.

And fellow researcher Voris said the study sheds light on the way that animals come to exploit similar niches in the environment, regardless of geography — a system called convergent evolution.

“It really tests the idea of convergent evolution,” Voris said. “Do we see similar types of behaviors and morphologies and hunting tactics in different geographic areas? Or are there important differences that suggest it came about differently?”

Voris said Jayne’s work is a testament both to his perseverance and the university’s commitment to research over a career.

“This is the result of his being supported in his teaching and research over years,” Voris said. “If we didn’t have that in our system of higher education and we don’t support science on an ongoing basis, we’re in trouble.”

And work like this often leads to unexpected discoveries, such as the medical benefits of snake venom in controlling seizures, he said.

“It doesn’t always seem like it because we’re learning how things operate,” Voris said, “but applied science is at almost every turn in the work we do.” 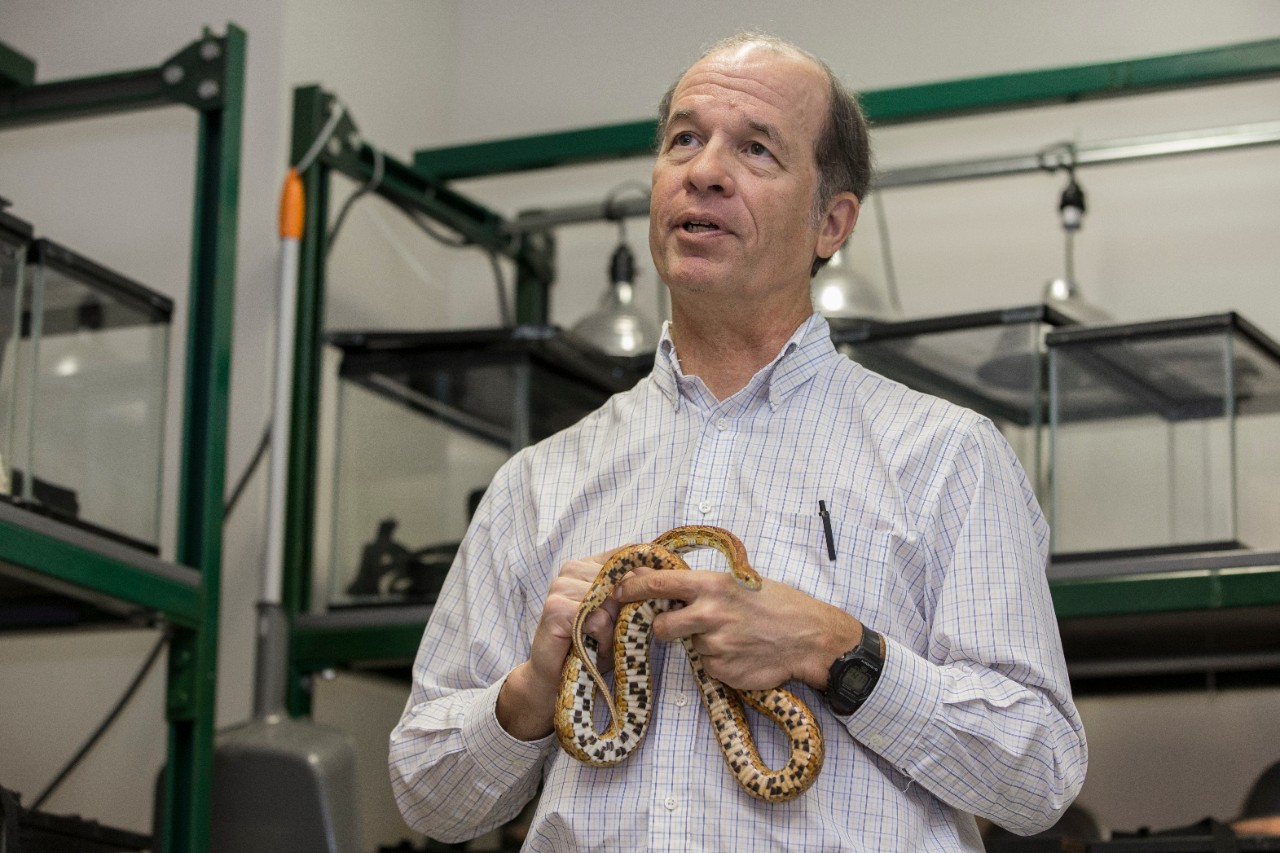