How a UC student landed visits from the CEO of Starbucks and former CEO of J.C. Penney to his event

Jack FitzGerald was less than two days away from seeing his vision become reality when his phone rang. Panic followed.

The University of Cincinnati senior communication student had spent the previous 17 months planning, coordinating early-morning conference calls, recruiting volunteers, soliciting sponsors and — most importantly — securing speakers for an event on April 7 organized to honor the late leadership expert and former UC president Warren Bennis. FitzGerald had managed to get commitments from Starbucks Executive Chairman Howard Schultz and former J.C. Penney CEO Myron E. Ullman III to keynote the event, which had in turn led to hundreds of RSVPs.

But when Fitzgerald answered his phone that day, he learned that Schultz, the event’s top draw, had to cancel because of emergency eye surgery. He and his team of student volunteers immediately began working on a fix.

“It was a crisis,” FitzGerald says. “It was a test from Warren Bennis saying, ‘Hey, how are you going to handle this when the plan falls apart? You’ve got 700 people that RSVP’d for an event that’s in 48 hours. What are you going to do?’” 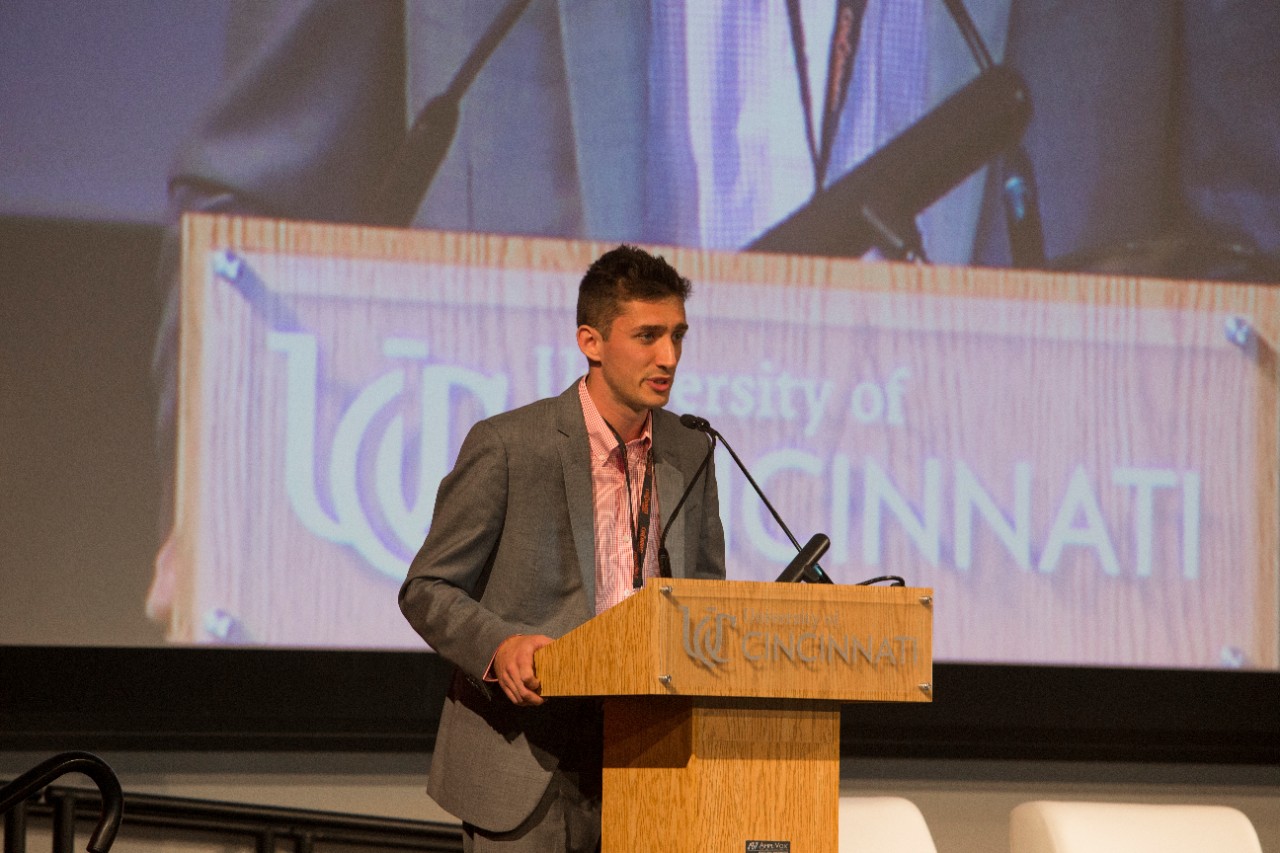 Jack FitzGerald speaks at the Warren Bennis Leadership Experience on April 7. FitzGerald led a group of students for more than a year to organize the event.

Tess Gerdemann, a second-year international politics student and FitzGerald’s second in command, remembers thinking that things had come together so smoothly in the days leading up to the event that it was almost too good to be true. “I knew something would go wrong,” she says. “I was hoping it wouldn’t be this.” But there she was, pacing at 6 a.m. on a Thursday in the common area of her sorority house, speaking on a 12-way conference call that included representatives from the UC Foundation and the president’s office, still looking for a solution.

Finally, it was Schultz himself that made it work. Originally, the Warren Bennis Leadership Experience had been scheduled to take place early on a Friday morning, as Schultz had been scheduled to attend another function in another city that afternoon. The surgery he had undergone came with doctor’s orders to not travel by plane for 48 hours. Schultz canceled his other commitment and arranged to land in Cincinnati around 1 p.m. local time, and the event was rescheduled to take place later in the day.

“He moved mountains to make this happen,” says Gerdemann, who accompanied UC security to pick up Schultz at a small airport outside Cincinnati. “I think that’s a good testament to how Warren Bennis affected people — the fact that years later, Howard Schultz will just drop everything to make this happen.” 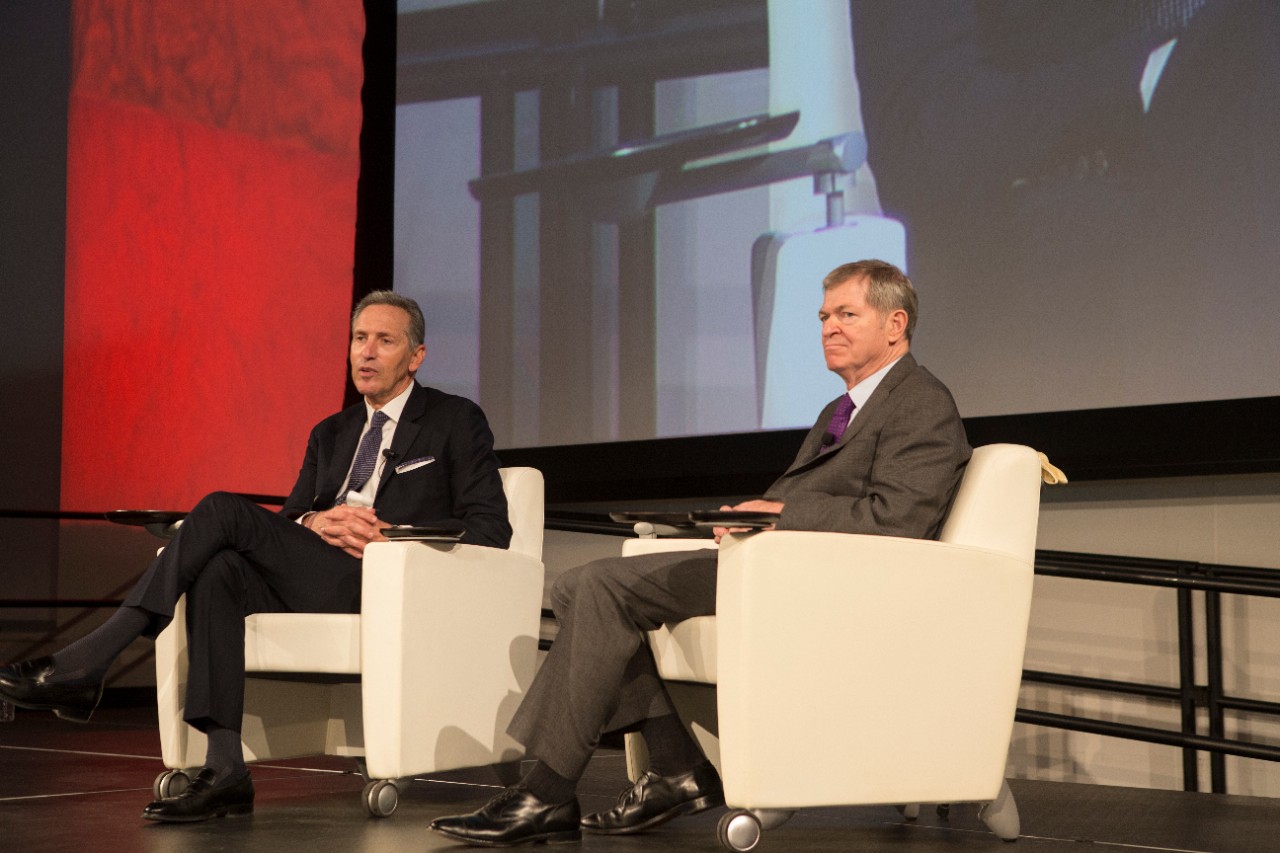 Bennis was once widely considered one of the foremost experts on leadership in the world. He served as an adviser to four U.S. presidents. He consulted for numerous Fortune 500 companies. In 1996, Forbes magazine dubbed him the “dean of leadership gurus,” and that was well before even a quarter of the books Bennis authored on leadership had been published. By the time of his death in 2014, Bennis had nearly 30 author credits to his name.

Bennis is not, however, commonly remembered first for serving as the university’s 18th president, despite his pivotal role in UC’s transformation into a public institution in the ’70s.

When FitzGerald decided to attend UC, he had no idea that Bennis was a president emeritus at UC. FitzGerald first became acquainted with Bennis’ writings while he was still in high school and living with his parents in suburban Cleveland, but it wasn’t because he had taken an interest in Bennis or leadership. “I came home late and broke curfew one night, and my dad has a habit of handing out these quirky punishments,” he recalls. “I had to read Warren Bennis’ book ‘On Becoming a Leader’ and write a paper on it for my dad. That was my introduction to his work.”

It wasn’t until a few years later that FitzGerald learned about Bennis’ UC ties. The then-junior’s love of TED Talks led him to join the executive board of TEDxUCincinnati, where he was tasked with creating a new program for freshman dubbed the Developing Leadership Program. FitzGerald returned to “On Becoming a Leader,” and modeled each of the 10 biweekly sessions around the 10 chapters in the book. That’s when he realized the power of Bennis’ work, but the realization only raised new questions. “During this program, reading more of his books and finding out that he was a president at UC, I was like, ‘Where’s this guy’s name at the university?” he says. “I didn’t see it anywhere — no buildings named after him, no scholarships named after him. His name was really nowhere to be found on campus.”

That’s what inspired FitzGerald to organize an event to honor Bennis. It was an idea that he presented in November 2015 to Tom Humes, then the chairman of the UC Board of Trustees; Bill Mulvihill, longtime athletics and foundation staff member; and Jay Chatterjee, dean emeritus of the College of Design, Architecture, Art, and Planning. The idea turned into a vision: The Warren Bennis Leadership Experience. As Bennis himself said and FitzGerald is fond of quoting, “Leadership is the capacity to translate vision into reality.” 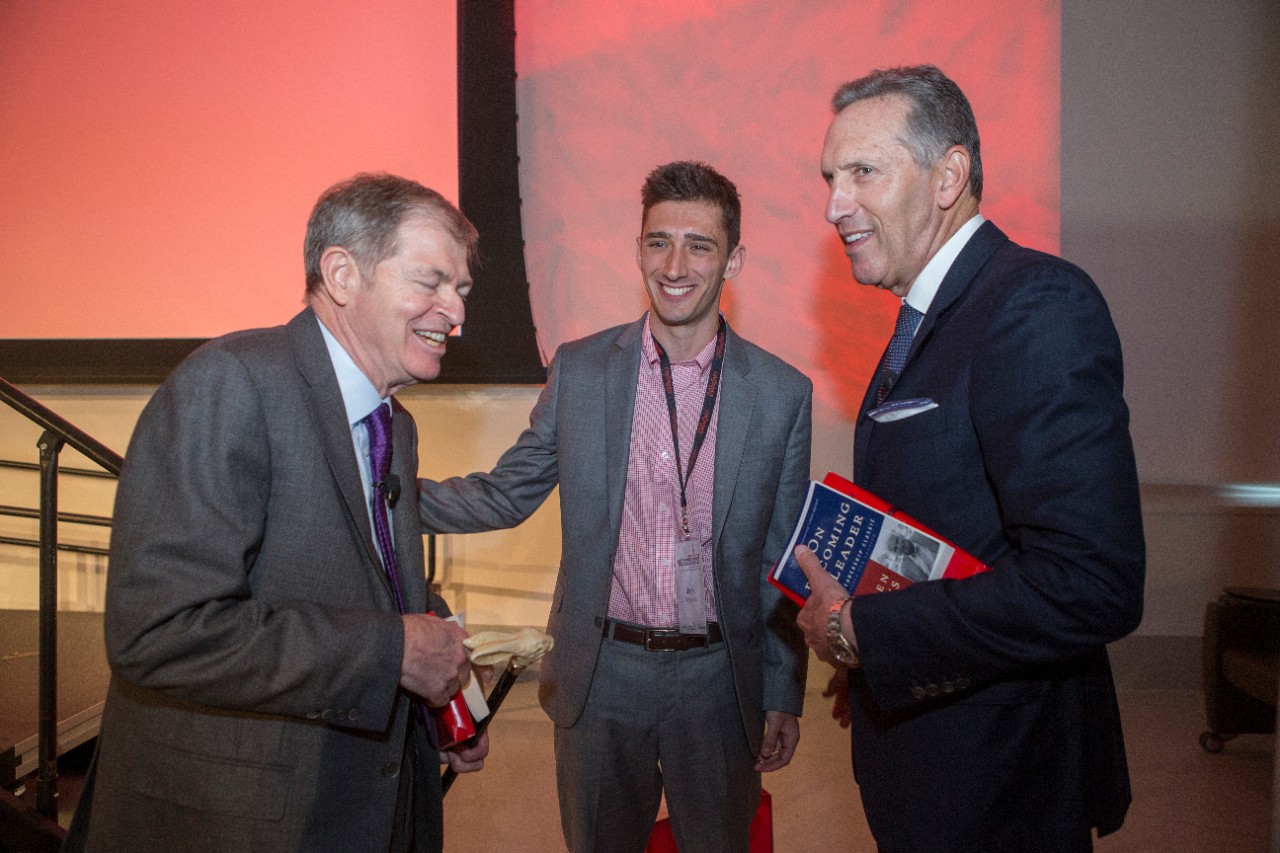 From left to right, Myron Ullman III, UC student Jack FitzGerald, and Howard Schultz share a laugh after the conclusion of the Warren Bennis Leadership Experience

FitzGerald built his team over the next 17 months with a leadership style that caught many of the people he recruited off guard. He’s inquisitive. He cares. He thinks everyone has something to teach him. It’s a trait that makes people want to be on his side. “I think his listening ability is one of his best characteristics because he’s so interested in you and so invested in you,” says freshman engineering student Avery Abraham, who led the team’s social media efforts. “He makes you feel important.”

Several of the students he mentored through the leadership program he started ended up on his team, including Gerdemann, who can still recall her first impression of FitzGerald. “When I went to do my interview for the Developing Leadership Program, one of the first things Jack said was, ‘I have so much to learn from you,’” she says. “I’m a freshman and I know nothing. I don’t know what’s going on. I was just like, ‘What?!’ But that’s just how Jack takes life.”

Others came to the Bennis project through other networks. Phil Heidenreich a graduating senior double-majoring in marketing and communication, crossed paths with FitzGerald at CommCeleb, the Department of Communication’s annual end-of-year celebration. Heidenreich was struck by the respect FitzGerald commanded from the communication faculty. “I was immediately engaged from the moment I met Jack,” he says. “Jack is a visionary.” 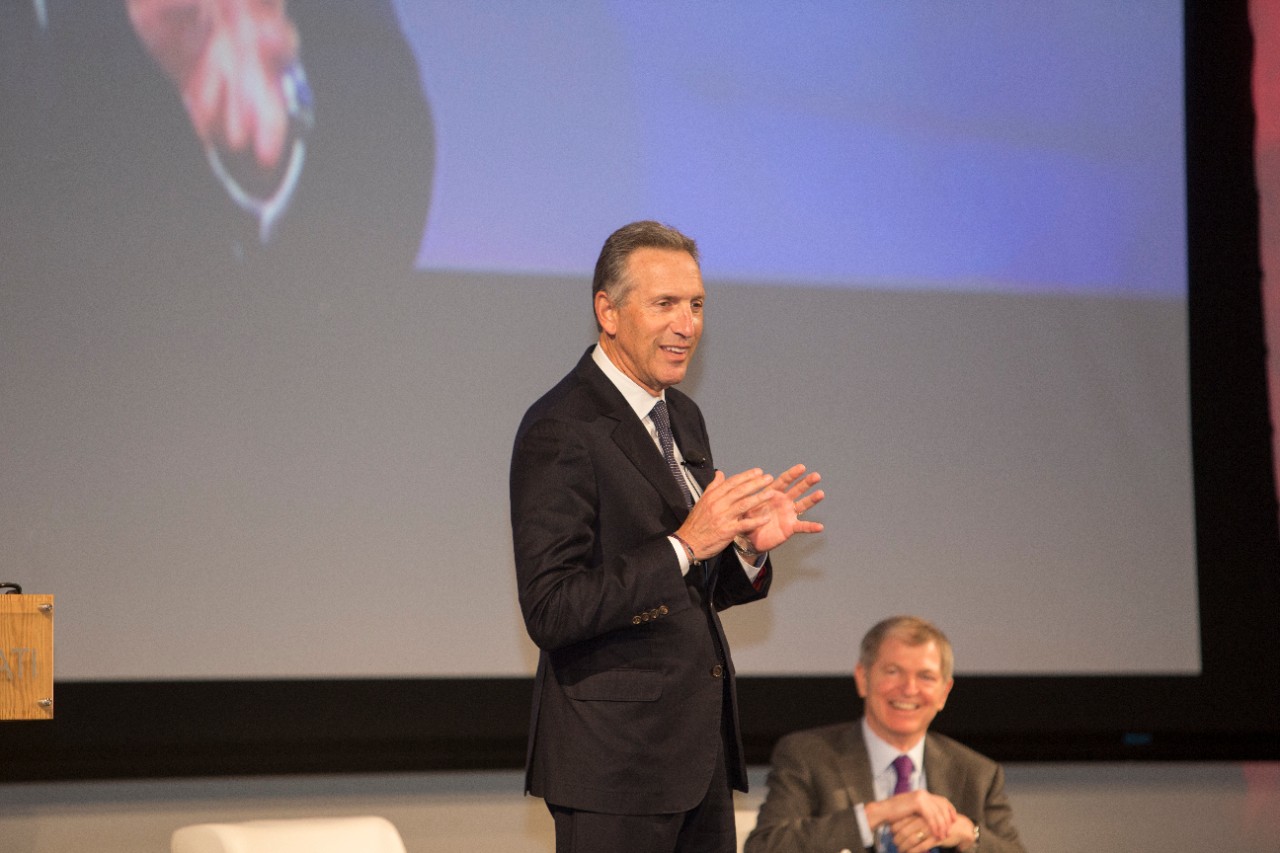 With the Schultz crisis averted, there was still the problem of letting those 700 people know that the event had been rescheduled on a day’s notice. UC President Neville Pinto personally announced the time change on Twitter, and other announcements were sent campuswide. Event volunteers were posted at the doors of the TUC Great Hall to inform those who missed the announcements of the change.

He feared for the worst. But when he reached the podium to give his opening remarks and looked out into the audience, FitzGerald saw hundreds of pairs of eyes looking back at him.

After concluding his remarks, FitzGerald headed backstage to breathe a sigh of relief and collect himself. But he could hear Pinto out on the stage alluding to the whirlwind chain of events that had nearly caused the conference to be canceled. Pinto complimented the student for keeping it together despite all of the last-minute challenges. Through a knowing grin, Pinto gave the perfect summary of FitzGerald’s experience: “Welcome to leadership.”

FitzGerald hopes that this year’s leadership conference was the first of many to come. He deliberately recruited younger students like Abraham and Gerdemann — the latter of whom will direct next year’s Bennis tribute — to ensure that Bennis’ legacy at UC is honored for years to come. But he doesn’t see the event as his legacy. “This was not about us,” he says. “This was about something much bigger than us. It was honoring a past university president.

“But even on a larger scale, I think it was taking to heart the call from the [university’s] bicentennial and for this third century at UC, and that was to answer the question of who we are and what makes us unique as a university.”