You are what your dad eats

UC biology study suggests a father’s nutrition before sex could contribute to the health of his offspring.

Doctors long have stressed the importance of good nutrition for expectant mothers.

Now biologists at the University of Cincinnati say the father’s diet could play a similar role in the health of a baby.

UC biology professors Michal Polak and Joshua Benoit manipulated the nutrition of male fruit flies and observed a strong correlation between poor diet and poor survivorship among their offspring. The study was published Wednesday, Oct. 11, in the journal Proceedings of the Royal Society B.

“We were really surprised,” Polak said. “In many species, the moms do a lot of the care. So we expect there to be an effect from maternal diet on offspring because of that strong link. But it was a real surprise to find a link between paternal diet and offspring.” 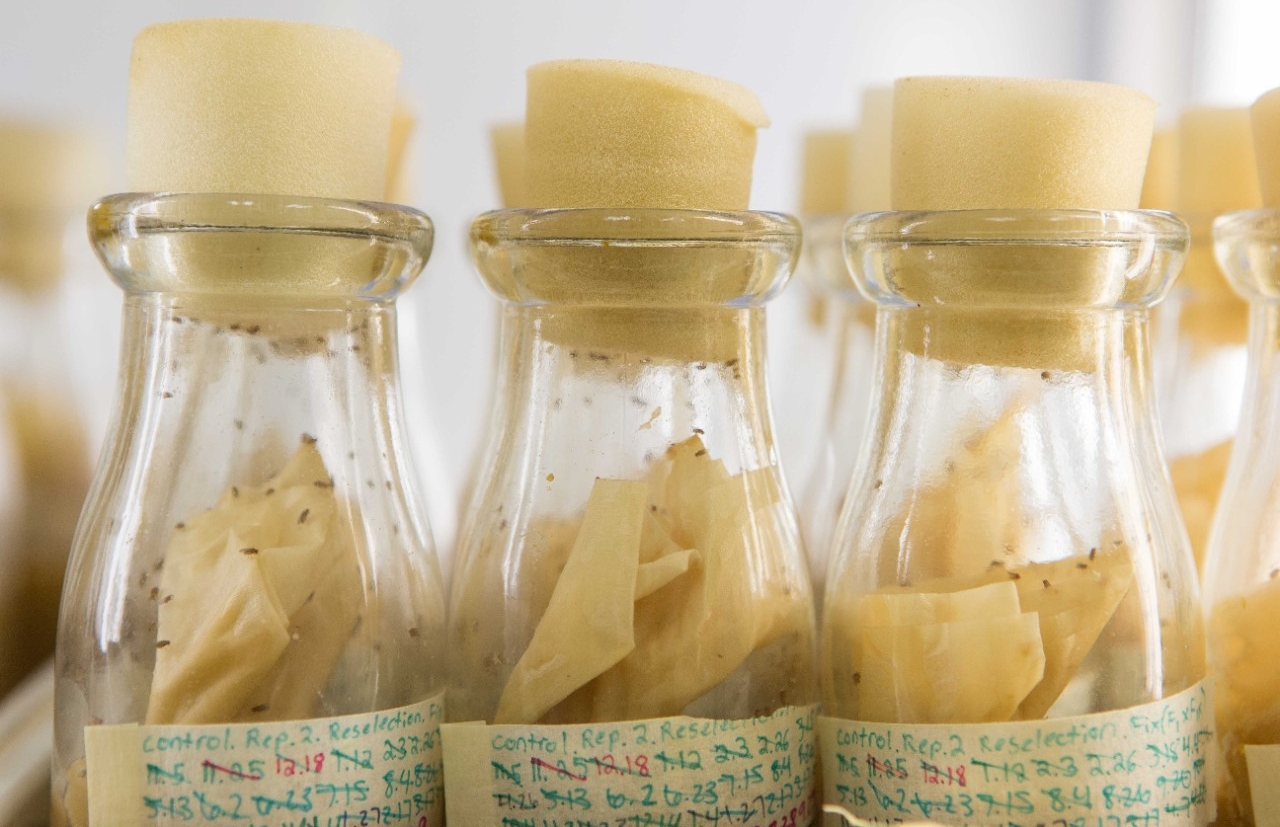 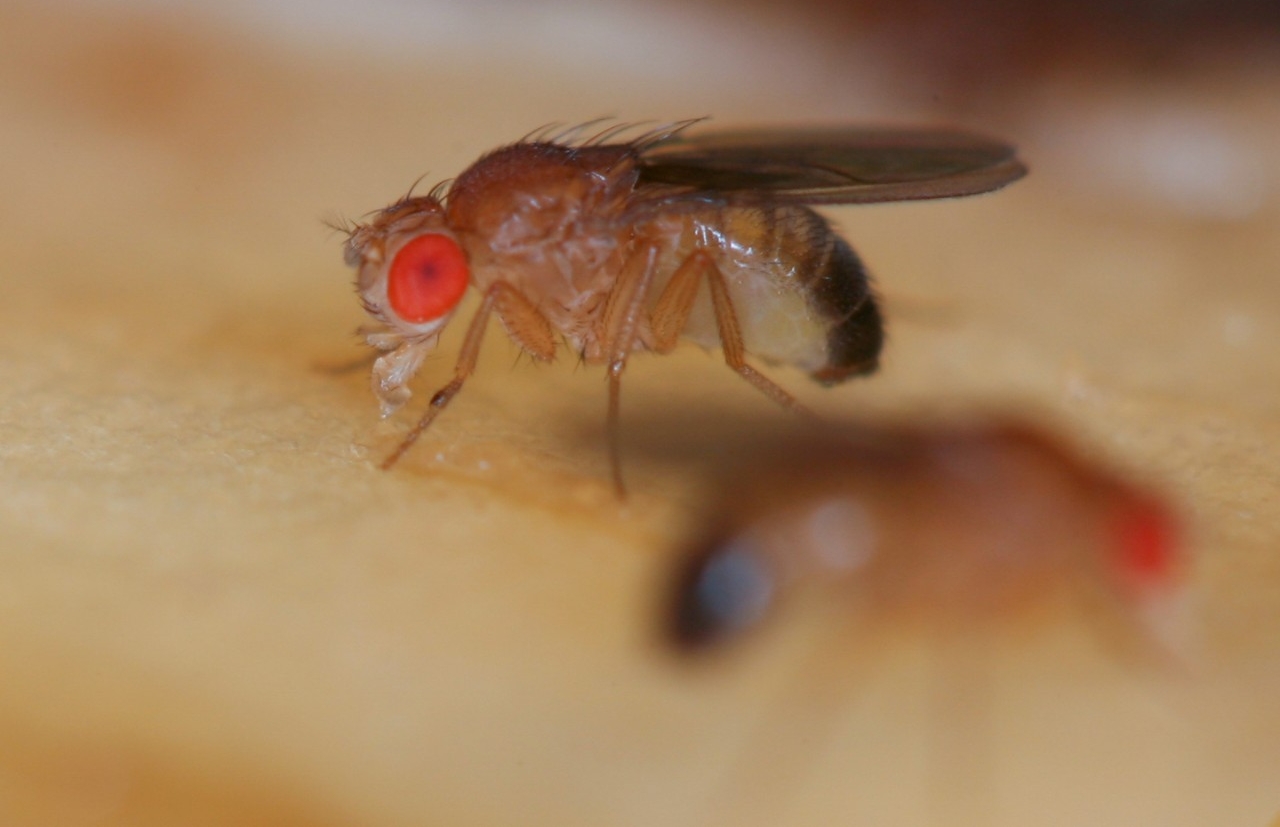 Everyone knows a father is responsible for half of his offspring’s genes. But the UC study comes at a time when researchers are learning more about other influences fathers have on their offspring’s health that are not necessarily coded within genes, a concept called epigenetics. These influences include direct environmental effects such as exposure to toxins that can be passed from the father to his offspring through his seminal plasma.

Epigenetics is the way by which cells read genes, making some dormant and others active. Environmental cues can turn certain genes on or off. And these epigenetic modifications, too, can be inherited.

For example, an Australian study in 2016 found that male mice that lived on the equivalent of a fast-food diet were more likely to have sons that were diabetic even though daughters remained unaffected. If these traits were coded in the father’s DNA, both sons and daughters would see similar health effects.

“Epigenetic changes are seen in population genetics as less durable than actual mutations to the genetic code or DNA molecule,” Polak said. “If it’s a dominant, deleterious mutation, it could be quickly eliminated out of a gene pool by selection. But if it’s positively selected, then it could sweep the gene pool and increase in frequency until it becomes fixed.”

“It’s a great system to work on. That’s why so many questions have been answered about them.”

‒ Joshua Benoit, assistant professor of biological sciences at UC on the value of fruit flies 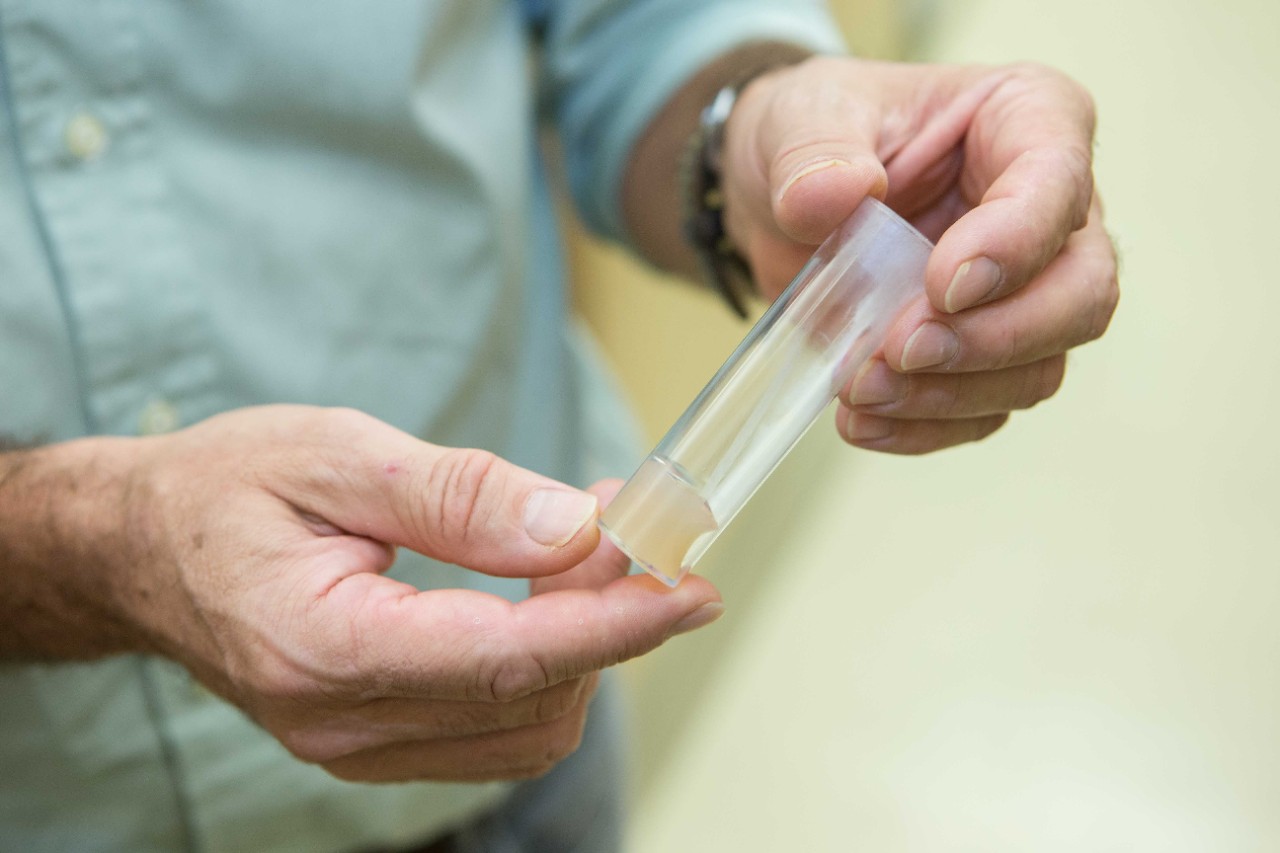 Research on fruit flies has earned six Nobel Prizes, including this year’s winner in physiology or medicine. The latest Nobel Prize study examined how genes control body clocks or circadian rhythms, which can help explain why some people have chronic trouble sleeping.

Fruit flies are found around the world. UC’s Benoit even saw them buzzing around inside a research station in Antarctica, where they probably stowed away on food supplies imported from Chile.

The flies became popular study subjects in the early 1900s when biologists began to unravel how genetic inheritance worked. High school biology textbooks still use the color of fruit fly eyes to illustrate the concept. 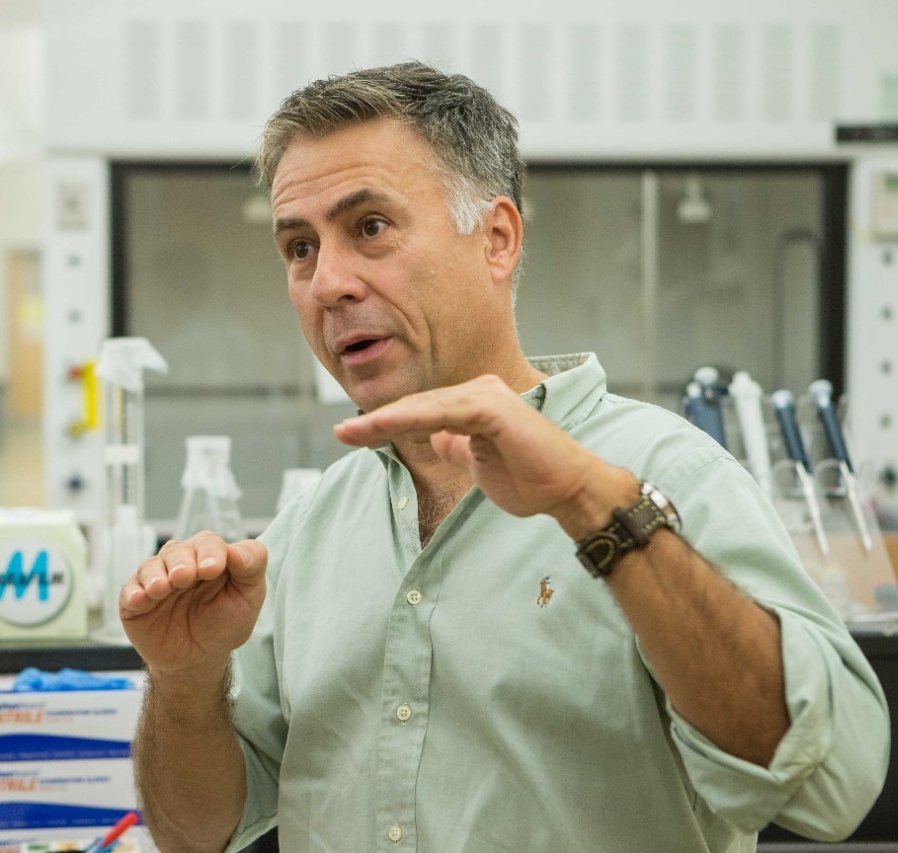 “We expect there to be an effect from maternal diet on offspring. But it was a real surprise to find a link between paternal diet and offspring.”

'Workhorse' of the lab

Today, scientists regularly study fruit flies because they share 60 percent of our genes and more than 75 percent of our disease genes. Geneticists have mapped their entire genome. More than 150 years of study have made this unassuming little fly a good model system, Polak said.

“It’s almost arbitrary why fruit flies were chosen,” Polak said. “It just became the workhorse in those original labs.”

Benoit said flies are a practical and inexpensive test subject.

“They reproduce quickly. You can rear a few hundred in just one of these little jars. You can have thousands of fruit flies in the same amount of space you could fit six mice,” Benoit said. “It’s a great system to work on. That’s why so many questions have been answered about them.” 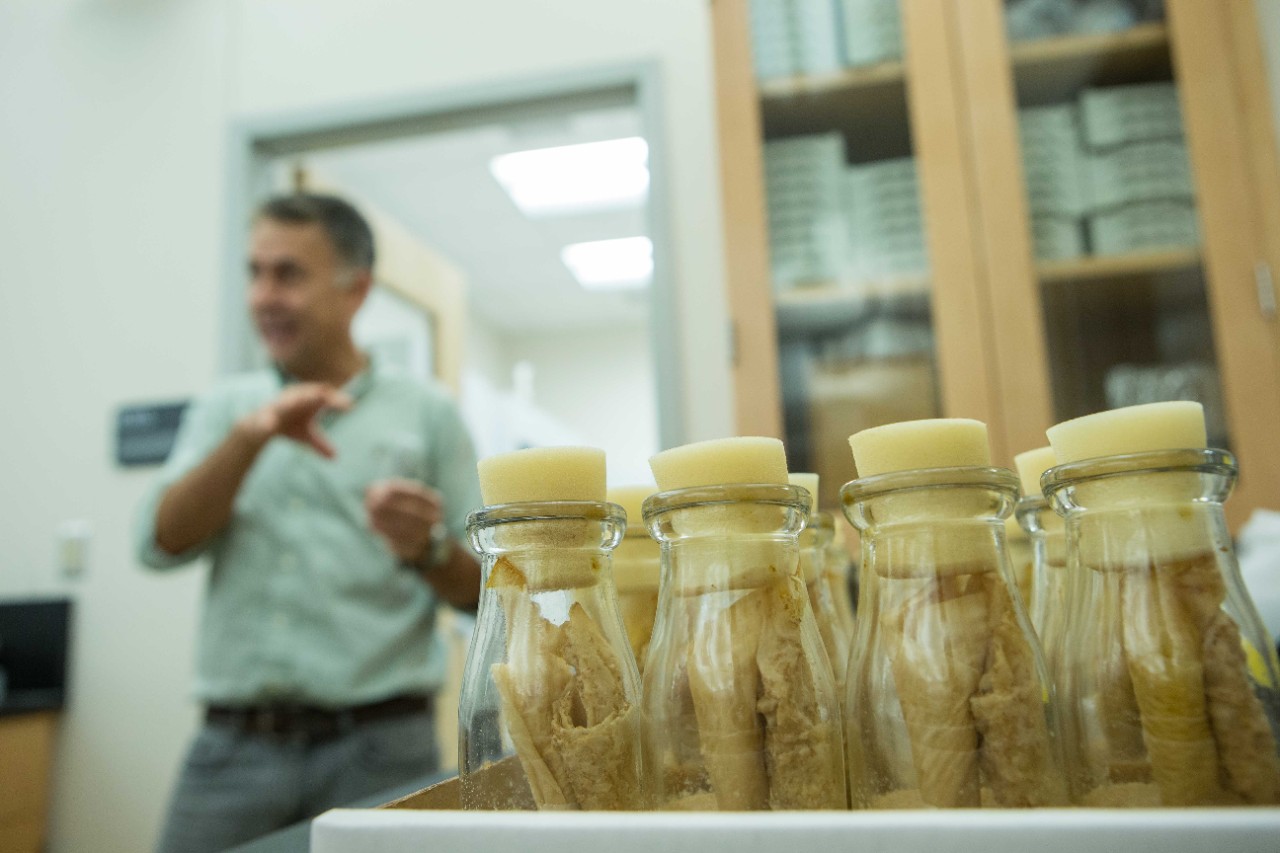 Fruit flies reproduce quickly and don't require much space, which makes them attractive for research.

How the study worked

For the UC study, Polak isolated females and males of the fruit fly species Drosophila melanogaster, which is famous for its enormous red eyes and high reproductive capacity. A single fly can lay 50 eggs per day or as many as 2,000 eggs in her short two-month lifetime.

UC researchers fed females the same diet. But they fed males 30 different diets of yeast and sugars. The flies could eat all they wanted from the agar mixture in the bottom of their glass beaker homes, but the quality of the food varied dramatically from low to high concentrations of proteins, carbohydrates and calories.

Importantly, none of the flies died from starvation. This ensured that the experiment did not inadvertently weed out the weakest and least-robust males, Polak said.

After 17 days on the strict diet, the males were mated individually and consecutively with two females, which all received the same diet of yeasted cornmeal. By controlling the diet and age of the mated female, researchers tried to limit variation in maternal conditions for the study.

And by mating the males consecutively, researchers wanted to learn about the effect of male mating order and what role diet played in changing the male’s ejaculate.

After the first mating, the male fly was mated 15 minutes later with a second female. Afterward, the females were placed in isolated breeding vials filled with grape agar suitable for laying eggs. After 24 hours, researchers counted their eggs.

After another 24-hour incubation period, the eggs were examined under a microscope to determine how many hatched or contained viable embryos. Unfertilized eggs were removed from consideration. After the first count, researchers waited another 24 hours to give potentially unviable eggs time to develop or hatch but none did.

Polak and Benoit found that embryos from the second mating were more likely to survive as their fathers’ diets improved in nutrition. These effects were less apparent in the first mating. Likewise, embryo mortality was highest for offspring of males that fed on a high-carbohydrate, low-protein diet.

Researchers also found a connection between the male’s body condition and his offspring’s mortality. Males with lower energy reserves (measured in whole-body fatty acids, glucose and protein) were more likely to have fewer surviving offspring.

Females laid roughly the same number of eggs regardless of the male’s diet or mating frequency. But the study suggested that something important in the male’s ejaculate was lost between the first and second pairings.

Polak’s study also found a slightly higher incidence of embryo mortality associated with male flies in the first mating that were fed the highest-calorie diet.

“There have been a fair number of studies that suggest male nutrition does affect reproductive capacity,” Benoit said. “But the reduction in viability was a lot smaller than what we saw in the low-quality diet or may have been masked since only a single mating was assessed.”

Polak said the study raises questions about how nutrition might affect successive generations. A 2002 Swedish population study found a correlation between 9-year-old children who had ample access to food and higher rates of diabetes and heart disease among their grandchildren. Meanwhile, children who faced privation from famine at the same age had children and grandchildren with less incidences of heart disease and diabetes.

Polak's study was funded in part by a four-year $882,000 grant from the National Science Foundation. 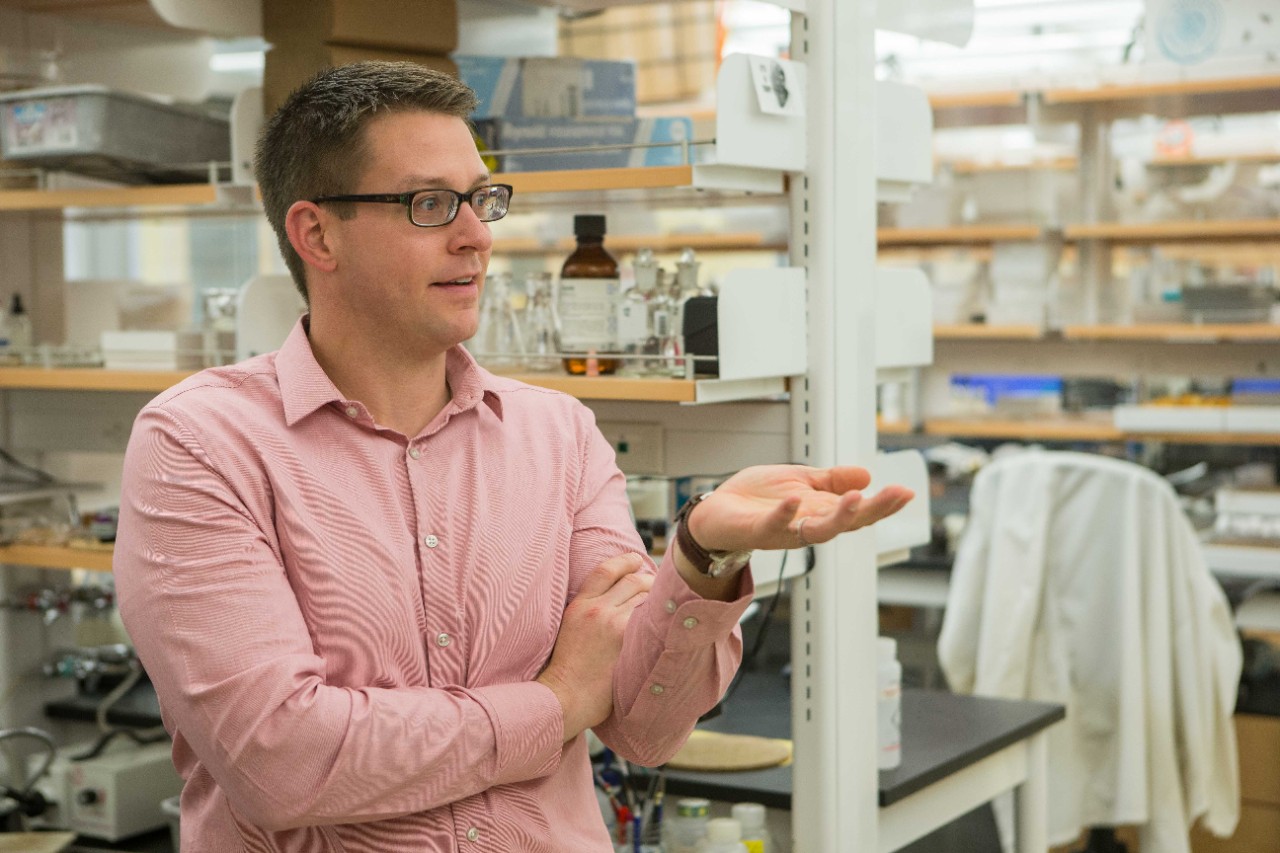 Next Benoit and Polak will turn their attention to a new study examining the genetic and epigenetic responses of fruit flies that are stressed by parasitic mites.

“The seminal fluid does have a protective role to play for the embryo. You definitely have implications for embryo health and viability. But that’s another chapter,” Polak said.

The researchers also are interested in testing whether parasitic infection could change the quality of male seminal plasma, possibly exerting effects on the embryo as they observed in the diet study.

After spending most of his academic career studying them, Polak has respect for the lowly fruit fly.

“You get a special sort of appreciation for them when you see them in your kitchen courting on a piece of fruit,” he said. “You know a lot about them – and maybe you’re a little less likely to swat them.” 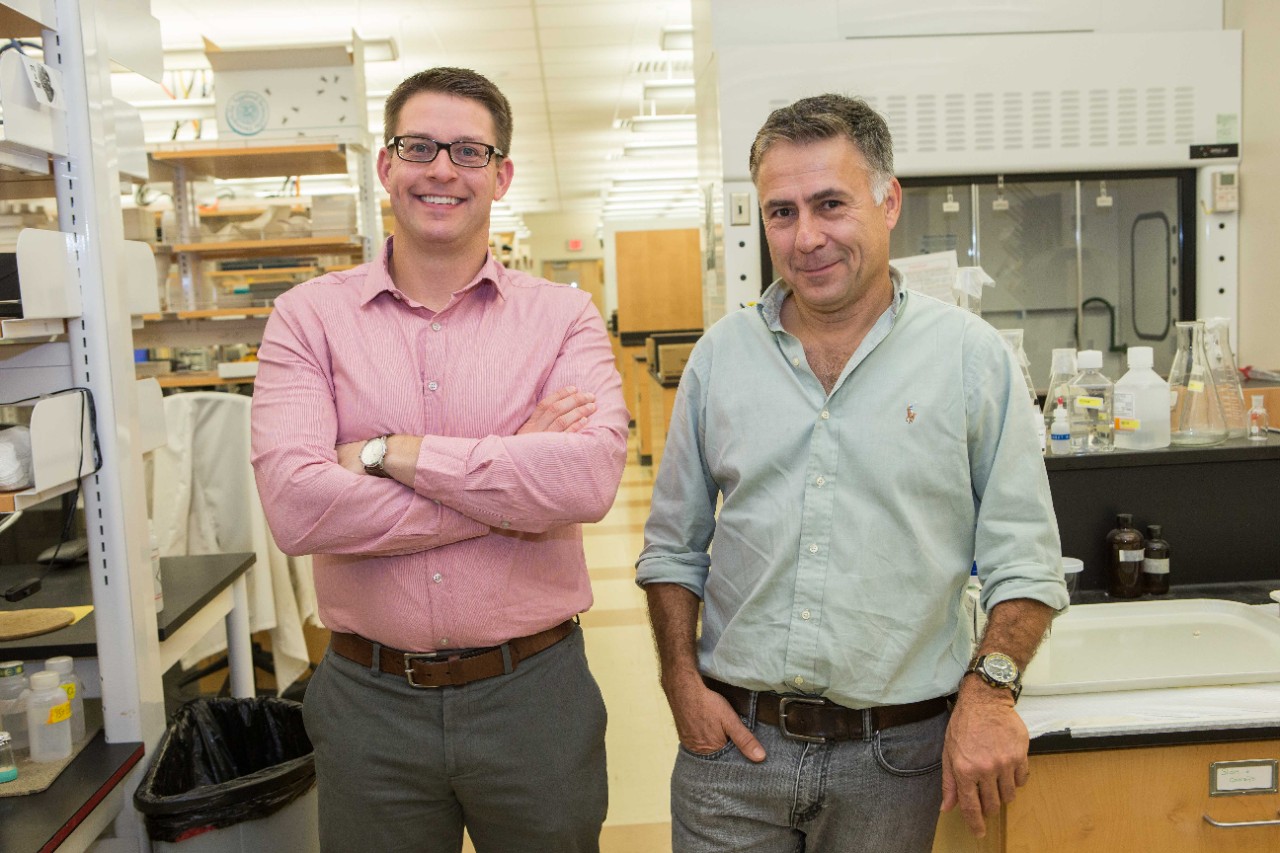 UC biologists Joshua Benoit, left, and Michal Polak will collaborate on a new study on fruit flies next year.