UC professor Brooke Crowley traveled to Madagascar four times for her ecology research. Her latest subject is a goshawk believed to be at risk of extinction. (Brooke Crowley)

University of Cincinnati professor Brooke Crowley wanted to know the hunting range of the Henst’s goshawk, a large forest-dwelling bird of prey that ambushes small animals.

Henst’s goshawks are difficult to find because of the rugged, inaccessible forest where they live. Little is known about their population. But because of their limited distribution, they are listed as near-threatened with extinction by the International Union for Conservation of Nature and Natural Resources.

So Crowley decided to conduct an elemental analysis using strontium, naturally occurring isotopes found everywhere on Earth that travel the food chain from the soil to plants to herbivores and predators.

Specifically, Crowley compared the ratio of strontium 86 and strontium 87 isotopes in rainforest leaves collected across Madagascar’s Ranomafana National Park to isotopes found in the remains of 19 partially consumed lemurs collected in or around goshawk nests to learn where the birds of prey were hunting.

Crowley, an associate professor of geology and anthropology at UC’s McMicken College of Arts and Sciences, found that goshawks appeared to hunt almost exclusively at lower elevations in forest that is most at risk to agricultural development and other human impacts.

The findings could help steer conservation efforts for goshawks and other vulnerable species.

“It’s hard to observe goshawk behavior in the wild. This is a good, indirect way of tracking habitat use,” Crowley said.

Her findings were published this week in the Wildlife Society Bulletin. 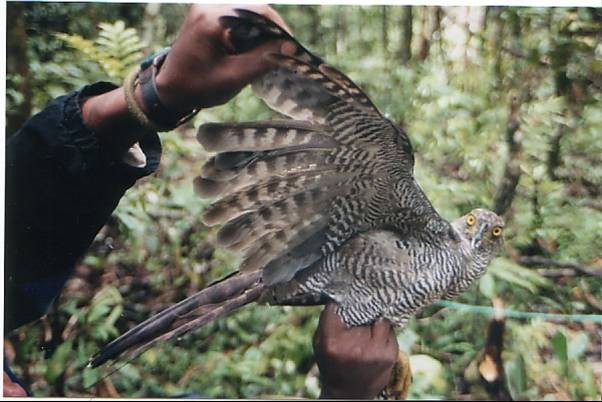 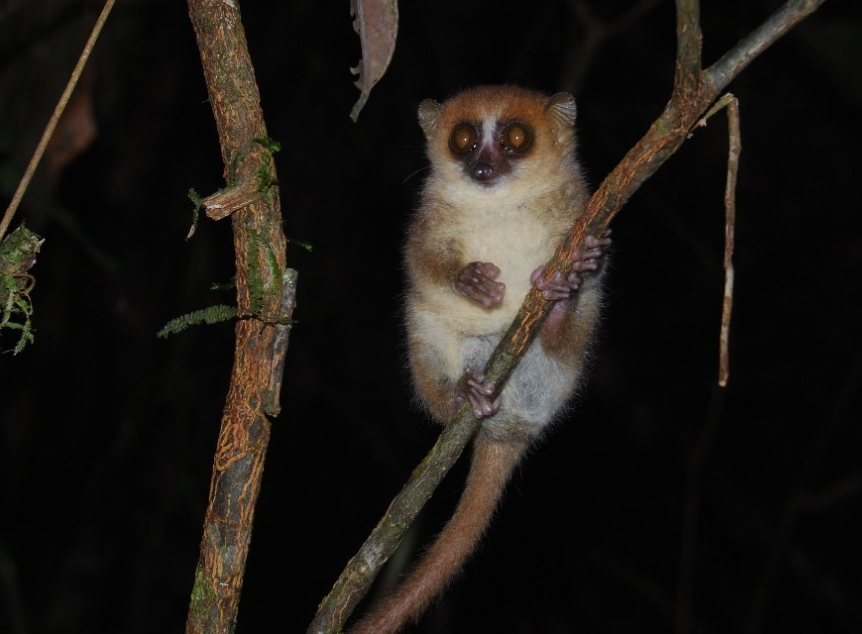 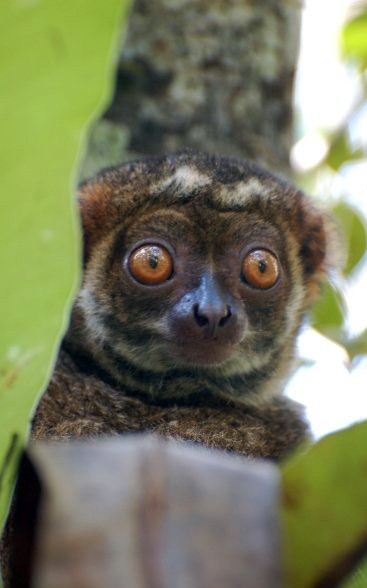 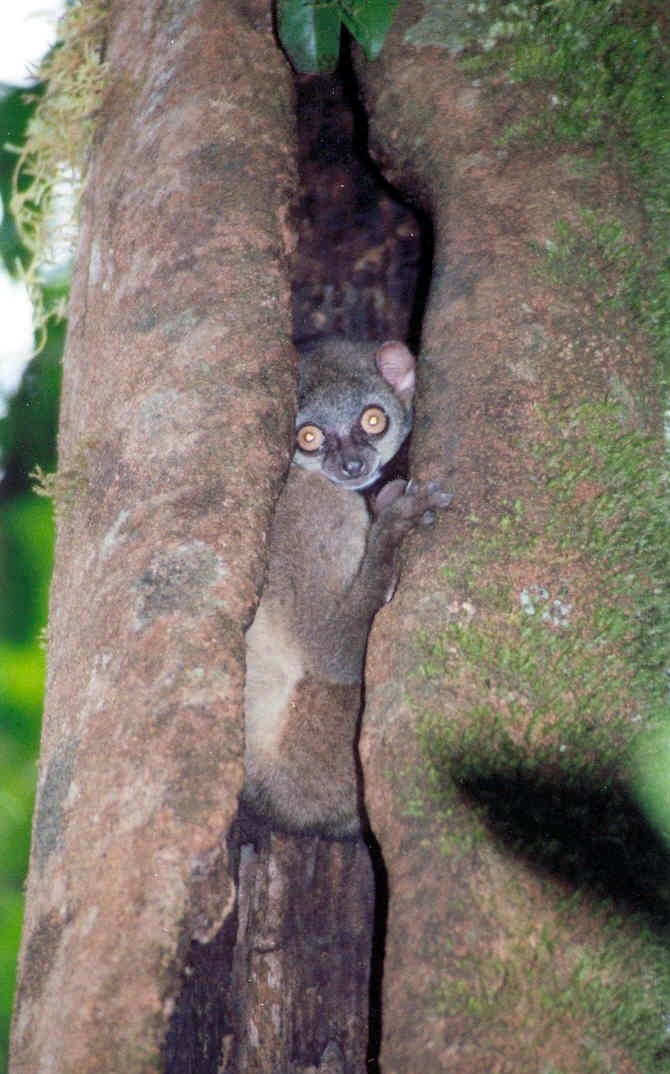 “Lemurs are in trouble. They’re in dire straits.”

Crowley has been to Madagascar four times for various research projects. For this study, she partnered with an eclectic team of experts, including wildlife biologist Sarah Karpanty, an associate professor at Virginia Tech, who conducted fieldwork on goshawks for her dissertation. (Her brother, Jeff Karpanty, is a UC graduate.)

Karpanty scoured Madagascar’s Ranomafana National Park, which protects 160 square miles of mountainous rainforest. The park is rich in biodiversity with more than a dozen kinds of lemur, primates found only in Madagascar. The park varies in elevation from 1,500 to 5,000 feet above sea level, which provides a variety of habitats for its many plants and animals.

But between the mountainous terrain and frequent drenching rains, finding even a single goshawk was a challenge.

“It’s not easy. You have to cover a lot of ground on foot. You’re in remote sections of Madagascar. So you try to get to high points where you can watch where birds are flying,” Karpanty said. 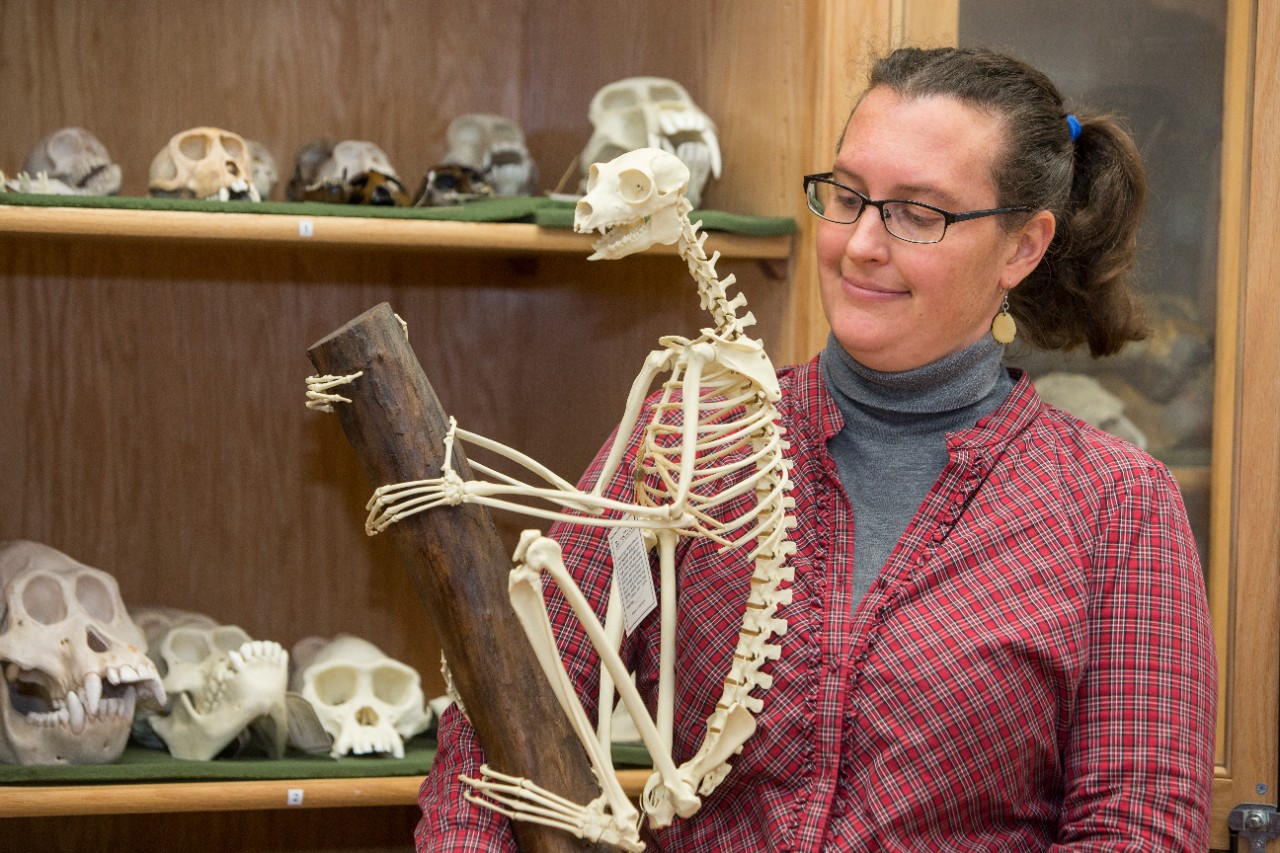 UC professor Brooke Crowley holds a skeleton of a lemur called an indri in the osteology lab of UC's Department of Anthropology. Crowley has a growing collection of animal bones for her students to study.

Used in falconry since the Middle Ages, goshawks have a telltale white stripe over their eyes that gives them an especially fierce countenance. Goshawks inhabit dense forests on six continents, taking advantage of cover to ambush prey from small animals to other birds. Their short wings and long, rudder-like tails make them supremely adapted to maneuvering through the tree canopy.

“They rely on surprise,” Karpanty said. “They live in dense, older forest. They sit and wait and then go into a quick dive after prey. They can tuck their wings to get through narrow gaps in the forest.”

Goshawks are at the top of the food chain wherever they are found. Having good numbers of apex predators is a sign of a healthy or intact ecosystem.

Karpanty donned rappelling gear to climb 40 feet into abandoned nests after nesting season to see what Henst’s goshawks were eating. They used a slingshot to fire a fishing line over a sturdy branch to rig the climbing ropes.

“I practiced climbing a lot at gyms. I was young, childless at the time and fearless!” Karpanty said. “My guides were really good with the slingshot.”

Not surprisingly, she found the skeletal remains of several kinds of small lemur at the bottom of the nests.

The conventional method of tracking birds by using radio telemetry was impractical in the rugged terrain, she said.

“We radio-tagged some birds but were unsuccessful in tracking them,” Karpanty said. “You have to do everything by foot so we’d lose the birds all the time. From our radio-transmitter data alone, we couldn’t know the extent of their range.”

“We make population estimates based on the area of protected land, assuming that animals are equally distributed over that space. We may be protecting land that animals may not be able to use.” 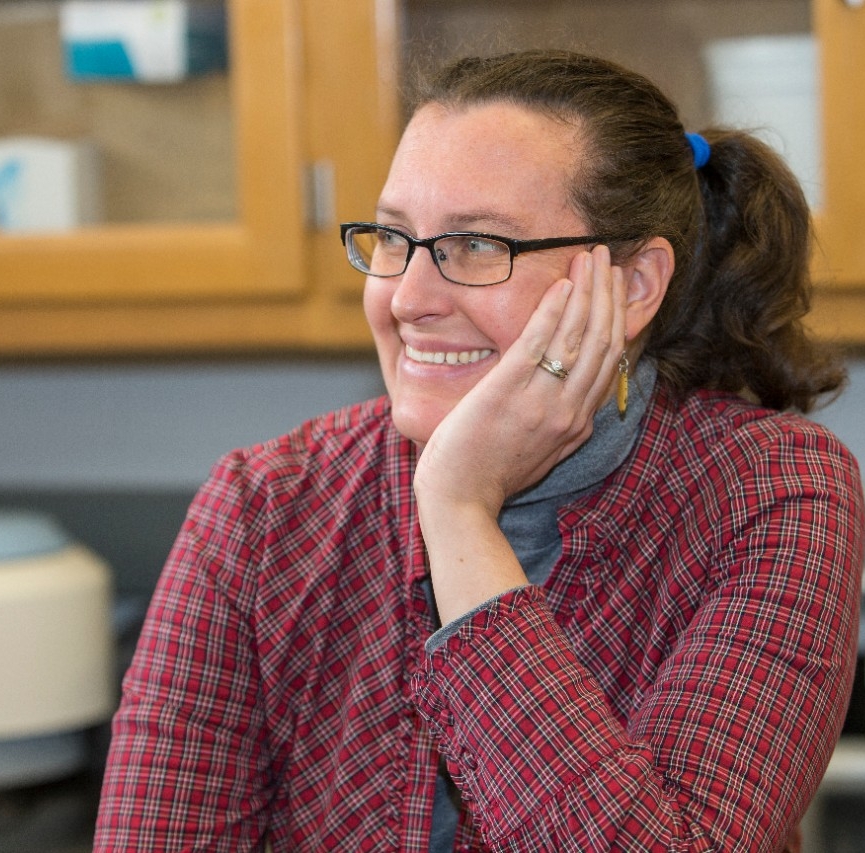 “It’s tough. We’re working in montane rainforest. A lot of people have a misconception that all tropical rainforests are hot. But this is cold and rainy. You’ll have months of nonstop rain. Everything is damp constantly,” Baden said.

“The cold and wet got to me quickly,” Crowley added. “I deeply respect the people who go into the forest and live there among the lemurs. I couldn’t do it.”

“It’s cat-sized. They’re comical to watch. They’ll come down to check you out and cock their heads to one side like a dog,” Baden said.

Lemurs navigate the forest from the treetops. But the terrain is harder for their two-legged relatives on the ground.

“You’ll be following animals and they can keep going in the trees, but you run into a cliff edge and you’re stuck,” she said. 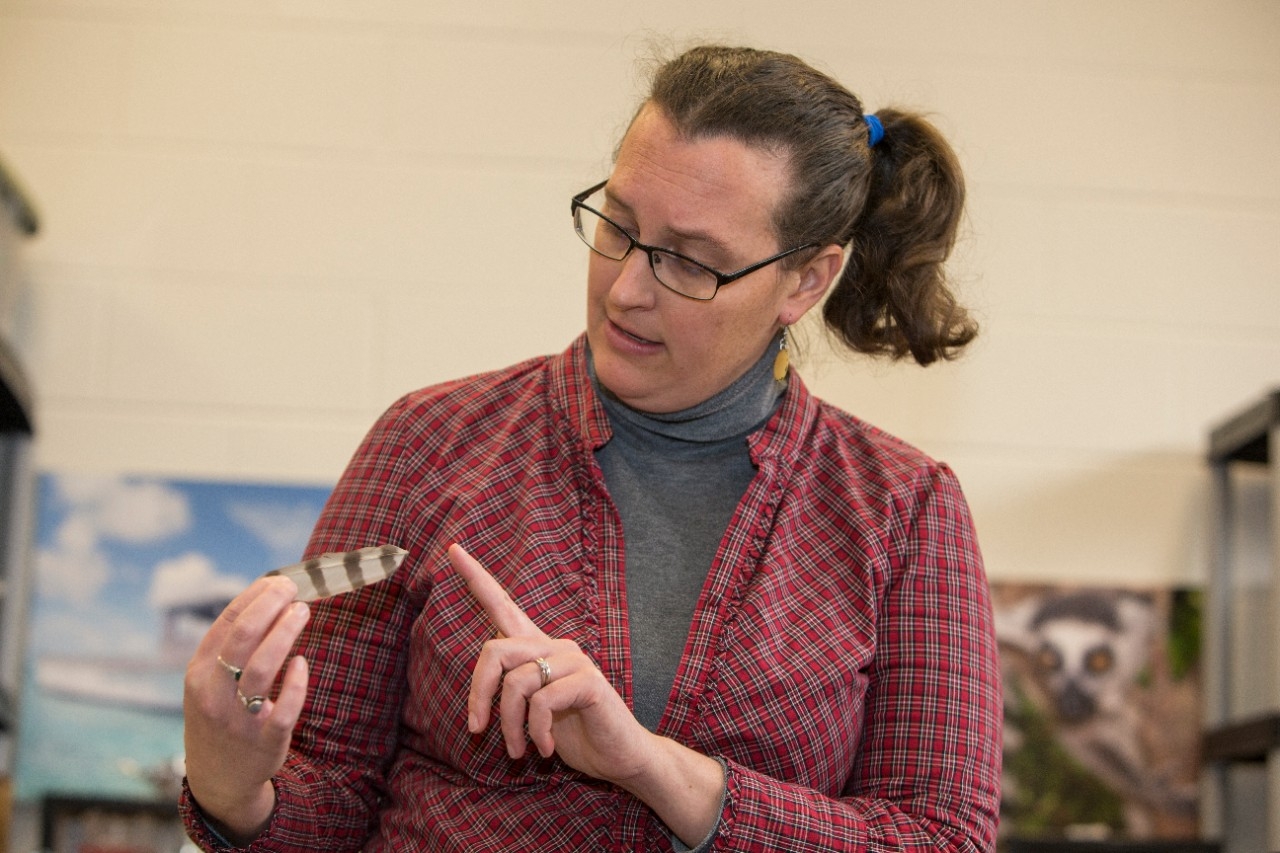 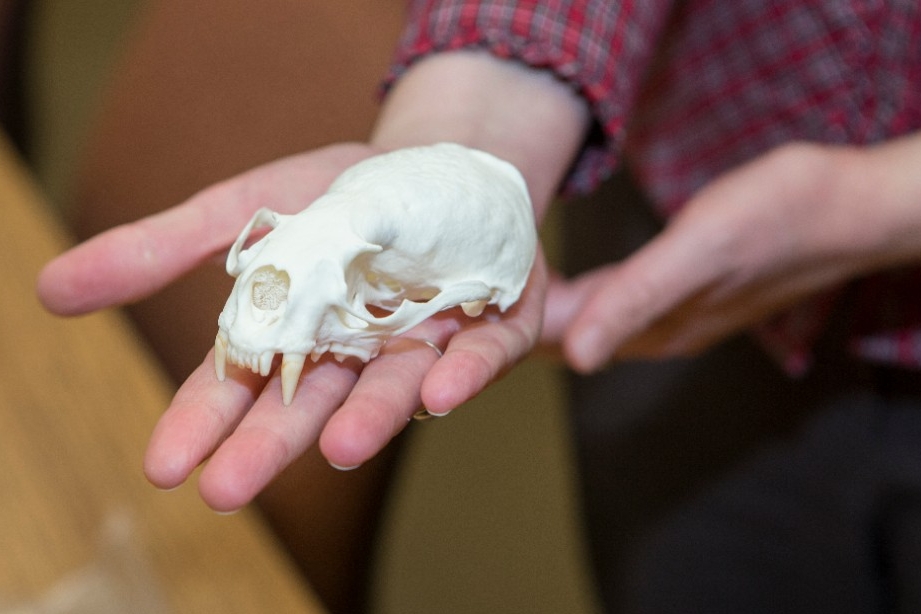 An otter skull, part of a collection of animal bones in UC professor Brooke Crowley's lab. 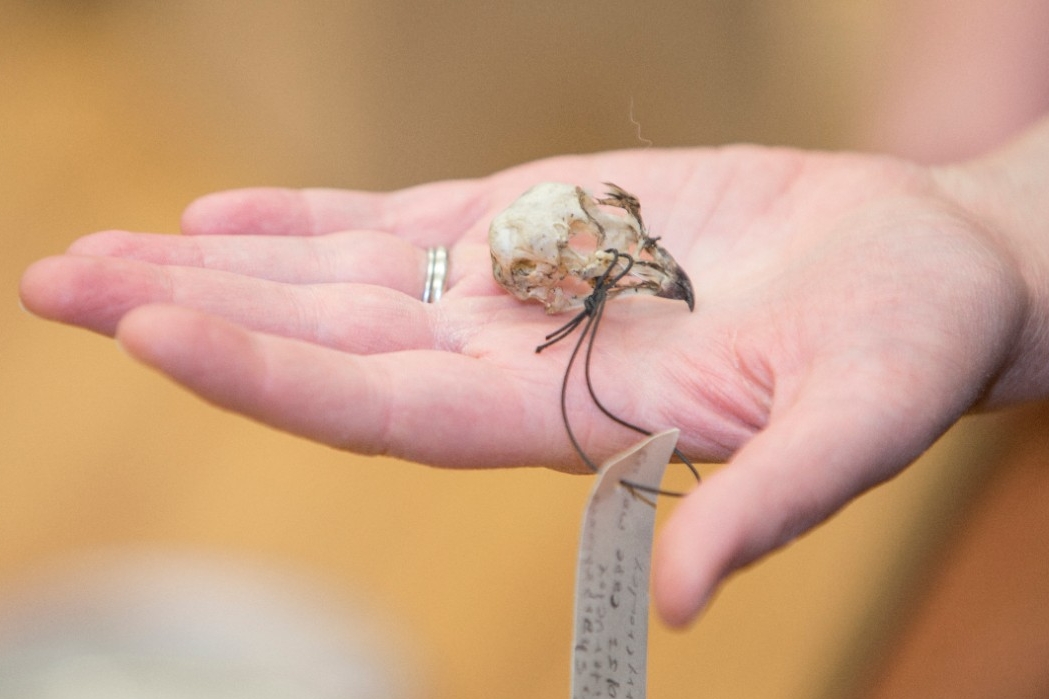 “Lemurs are the most endangered mammals in the world,” Baden said. “Unfortunately, what’s left of the forest in Madagascar are these higher-elevation places because nobody can use them for agriculture.”

Philip Slater of the University of Illinois and primatologist Summer Arrigo-Nelson with the California Institute of Pennsylvania also contributed to the study.

Baden and Arrigo-Nelson collected leaf and fruit samples of plants the lemurs were observed eating in different habitats and elevations in Ranomafana, recorded their location and shipped the dried specimens to Crowley for strontium analysis.

Researchers measured the ratio of strontium 86 and strontium 87 isotopes in lemur bones and the leaves collected from different forest habitats. These isotopes are released to varying degrees into streams and soil from the weathering of rocks. Plants absorb the strontium with other nutrients in the soil. Strontium then gets absorbed by animals when they eat the plants. In this way, the widely varying ratios of strontium isotopes creates a unique geographic signature. 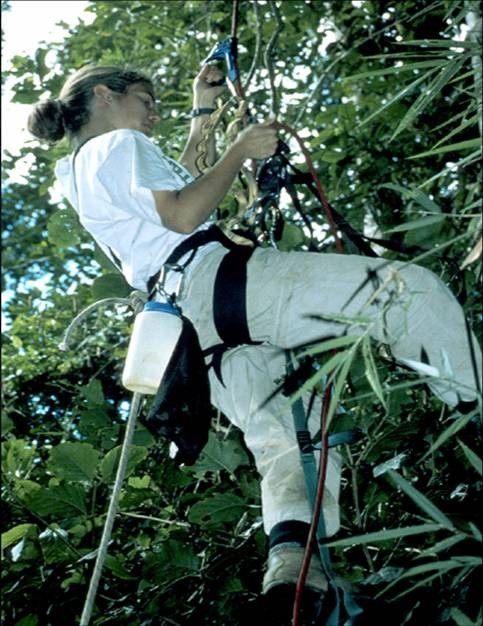 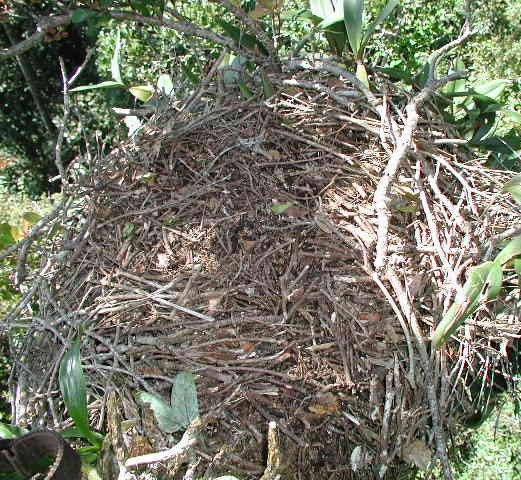 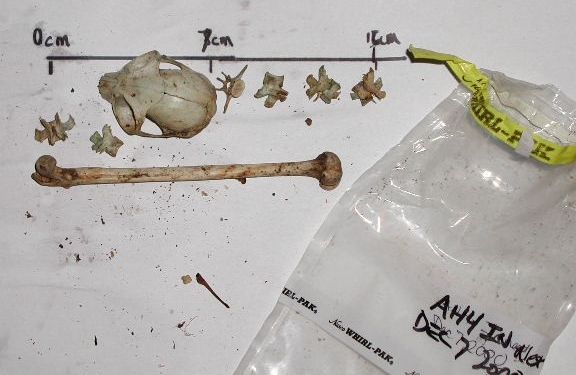 Lemur remains recovered from the nest of a Henst's goshawk. (Sarah Karpanty)

By measuring strontium in lemurs and the many diverse habitats of the park, Crowley could infer where goshawks caught their prey.

Crowley used a similar analysis to track the movement of extinct mammoths and mastodons that roamed what is now Ohio.

Crowley said her findings suggest that vulnerable species could be susceptible to development pressures even in large parks such as Ranomafana, which is nearly 40 percent bigger than Ohio’s biggest protected area, Shawnee State Forest.

“We make population estimates based on the area of protected land, assuming that animals are equally distributed over that space,” Crowley said. “We may be protecting land that animals may not be able to use.”

The study concluded that conserving and restoring lowland forest could be critical for the survival of goshawks on the island. 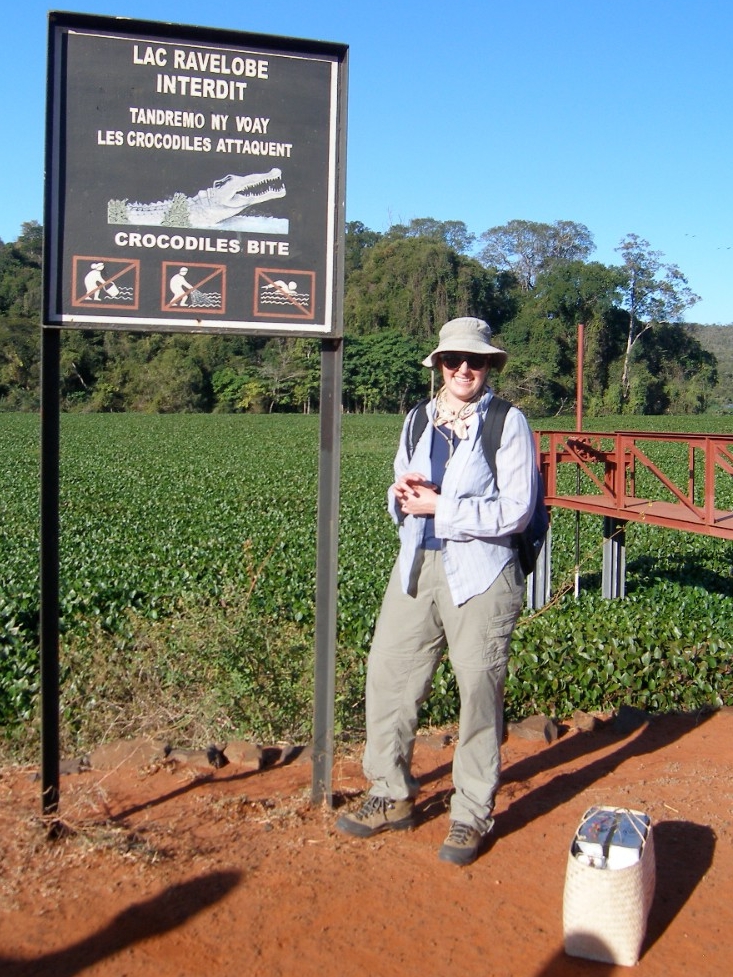 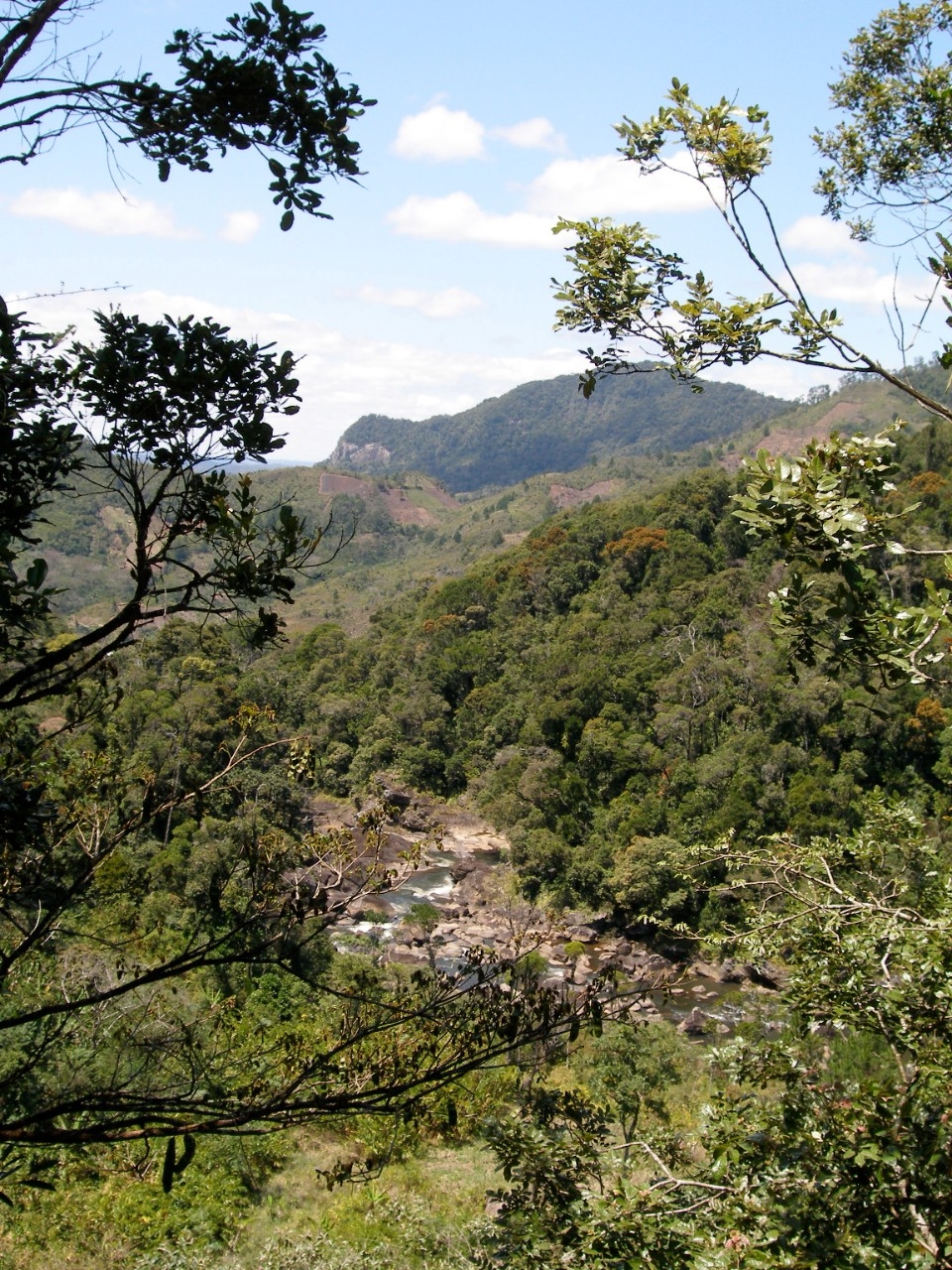 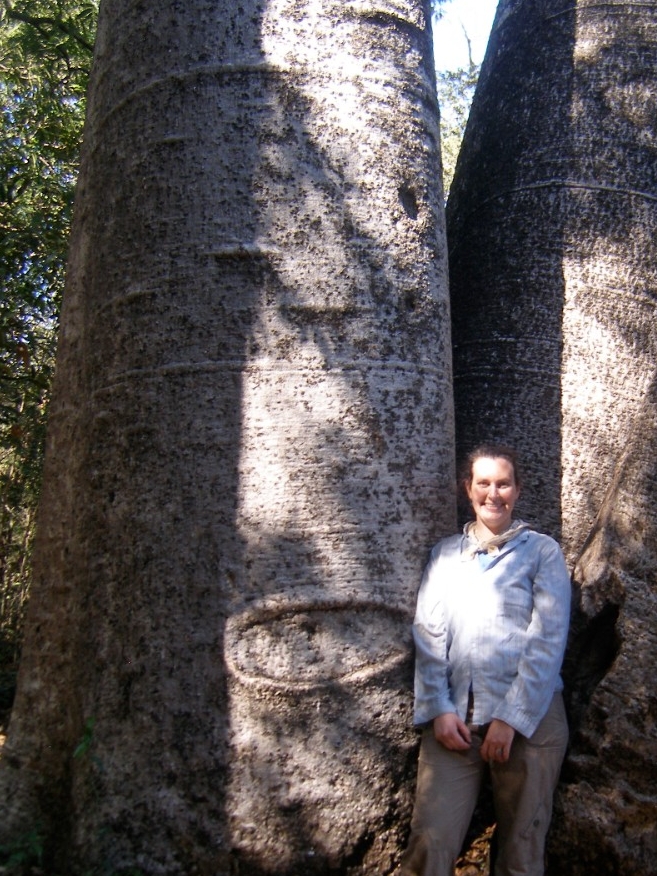 Lemur expert Baden said the study’s findings support what she has observed firsthand about lemurs and their predators. Improving or restoring habitat for goshawks will help endangered lemurs, too, she said.

“Lemurs are in trouble. They’re in dire straits,” Baden said.

Habitat loss is the biggest cause of their decline. And now there is an emerging threat: the bushmeat trade.

“The Malagasy people have a taboo against hunting lemurs. It’s related to ancestor worship. They long believed that lemurs resembled their ancestors,” Baden said.

Still, a 2016 study published in the journal PLOS One found widespread consumption of bushmeat. And for at least some of the Madagascar families surveyed, lemur was on the household menu, the study found.

Worse, because of its rich deposits of precious metals such as gold and other natural resources, Madagascar has been called “the next El Dorado.” Foreign workers employed by mining companies have no cultural prohibitions against eating lemurs or other forest animals they poach, Baden said.

“It’s easier to motivate people to conservation action when you’re talking about interesting top predators,” Karpanty said. “In this case you have an endangered predator and endangered prey, the lemurs. It highlights the fragility of the ecosystem.” 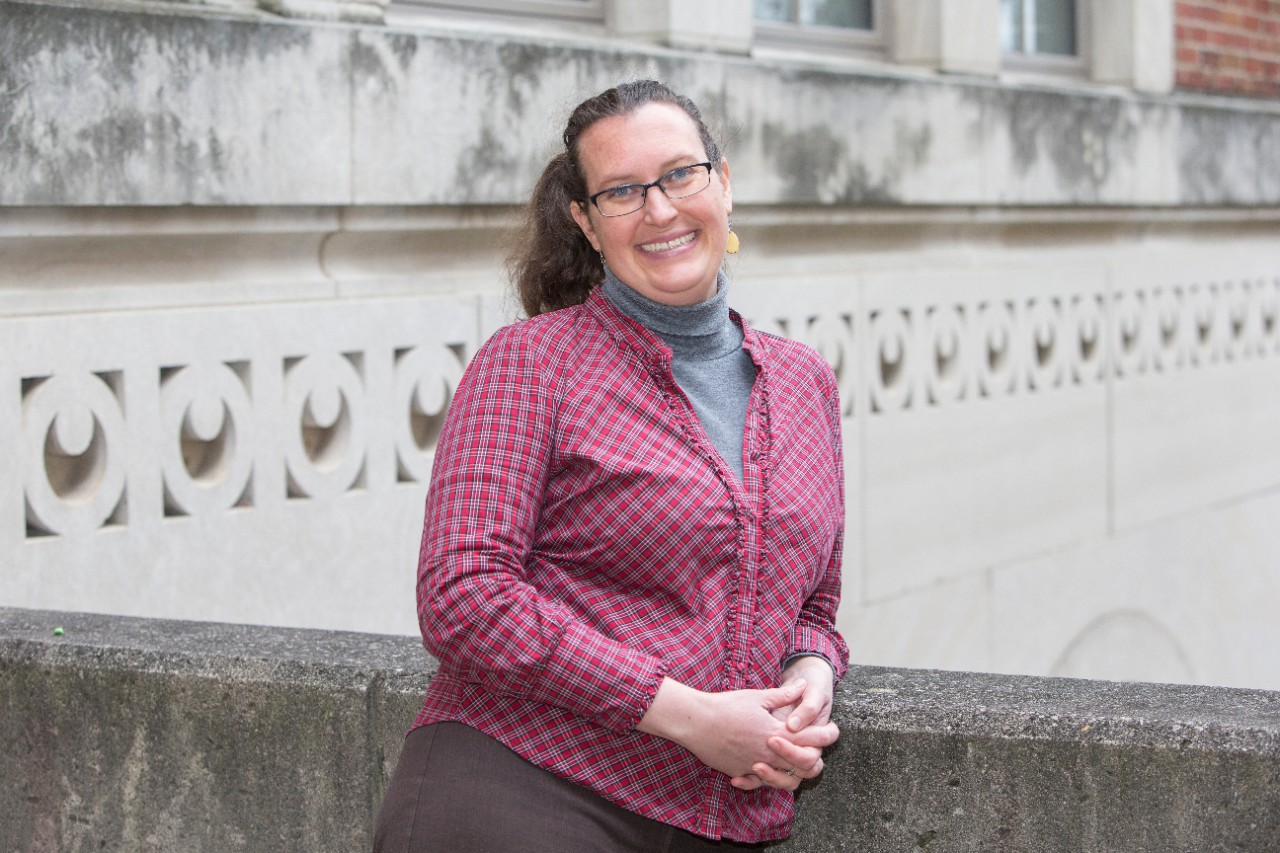 UC professor Brooke Crowley plans to use isotopic analysis next to study the habitat needs of hawks in North America.

Do you like field research? At UC, biology students get hands-on experience in their chosen subject area. Check out the Department of Anthropology or explore other programs on the undergraduate or graduate level.