Aerial view of the new C.V. Theis Groundwater Observatory along the Great Miami River. The observatory consists of monitoring wells that send data to a
tall steel pylon that can transmit data in real time to scientists even during floods. (Photo by Dylan Ward, UC assistant professor of geology.)

'A River Runs Through Us'

How does river pollution affect your well water? UC's new C.V. Theis Groundwater Observatory will help geologists answer that question for more than 2 million Ohioans who rely on wells for drinking water.

A novel project by the University of Cincinnati could lead to cleaner drinking water for millions of Americans.

UC’s College of Arts and Sciences on Friday unveiled the new C.V. Theis Groundwater Observatory, a sensor array that will track how water moves between the Great Miami River and the aquifer beneath it, the sole source of drinking water for more than 2.3 million Ohioans.

The $400,000 observatory at the Miami Whitewater Soccer Complex is the first of its kind east of the Mississippi River, said Amy Townsend-Small, associate professor of geology.

“Most of the studies of this process were done in the West where water is a more precious resource,” she said. “Here in the eastern United States and Ohio, in particular, we don’t have a water scarcity issue. What we have is a water quality issue.”

About 15 percent of the nation’s population gets its tap water from private wells drilled into aquifers, which are not regulated by the Environmental Protection Agency under the 1974 Safe Drinking Water Act.

Groundwater is often the cleanest source of water because it seeps through minute particles of sand, clay and gravel that trap toxins like a filter.

The new UC observatory, which is years in the making, will help scientists better understand the dynamics at play when heavy rains and flooding push huge amounts of comparatively dirty river water into the aquifer.

William Ball, dean of the UC College of Medicine, said the observatory will help protect drinking water for much of southwest Ohio.

"Clean water is fundamental to health," he said. "This observatory gives us the opportunity to monitor this aquifer along its entire length and ensure that it stays a healthy resource.

"We should not underestimate how important clean water is to the economic viability of this region," he said.

The Great Parks of Hamilton County, which leased the wooded observatory site to UC, is working to protect watersheds by preserving more riverfront land across its many parks, Executive Director Jack Sutton said.

The county preserved another 200 acres of Great Miami riverfront forest in 2016, he said.

"We’re very proud to be part of this project. It’s tying academia and science to the practical things we do to preserve natural resources," Sutton said.

David Nash, UC professor emeritus of geology, on Friday led UC officials on a tour of the observatory overlooking the river, still muddy and high from recent storms. His work inspired donors and corporate partners to fund the project.

“This system is essentially a huge sponge filled with glacially deposited sand and gravel. When it rains, it fills up with water. When the storm is over, it discharges the water out,” Nash said.

UC Observatory in the News 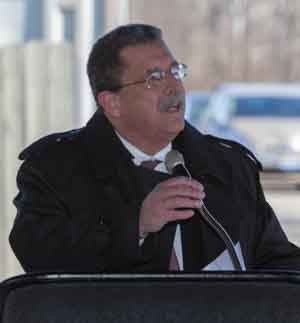 William Ball, dean of the UC College of Medicine, spoke Friday at the opening of the observatory. "This observatory gives us the opportunity to monitor this aquifer along its entire length and ensure it stays a healthy resource," he said. 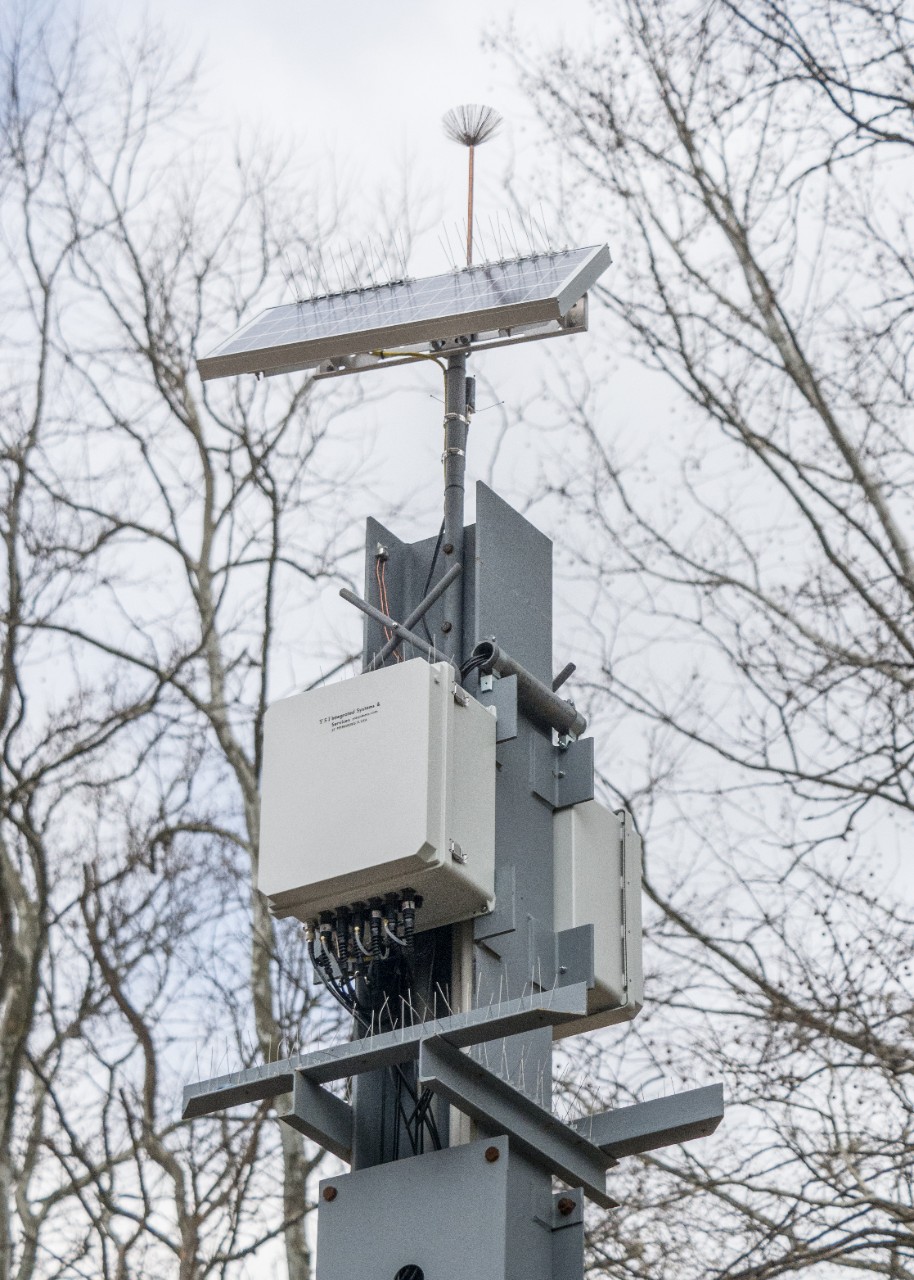 A cellular modem atop the pylon transmits water readings every 15 minutes to the geologists' computers and cell phones. The pylon was built to keep communications gear high above river floodwaters. 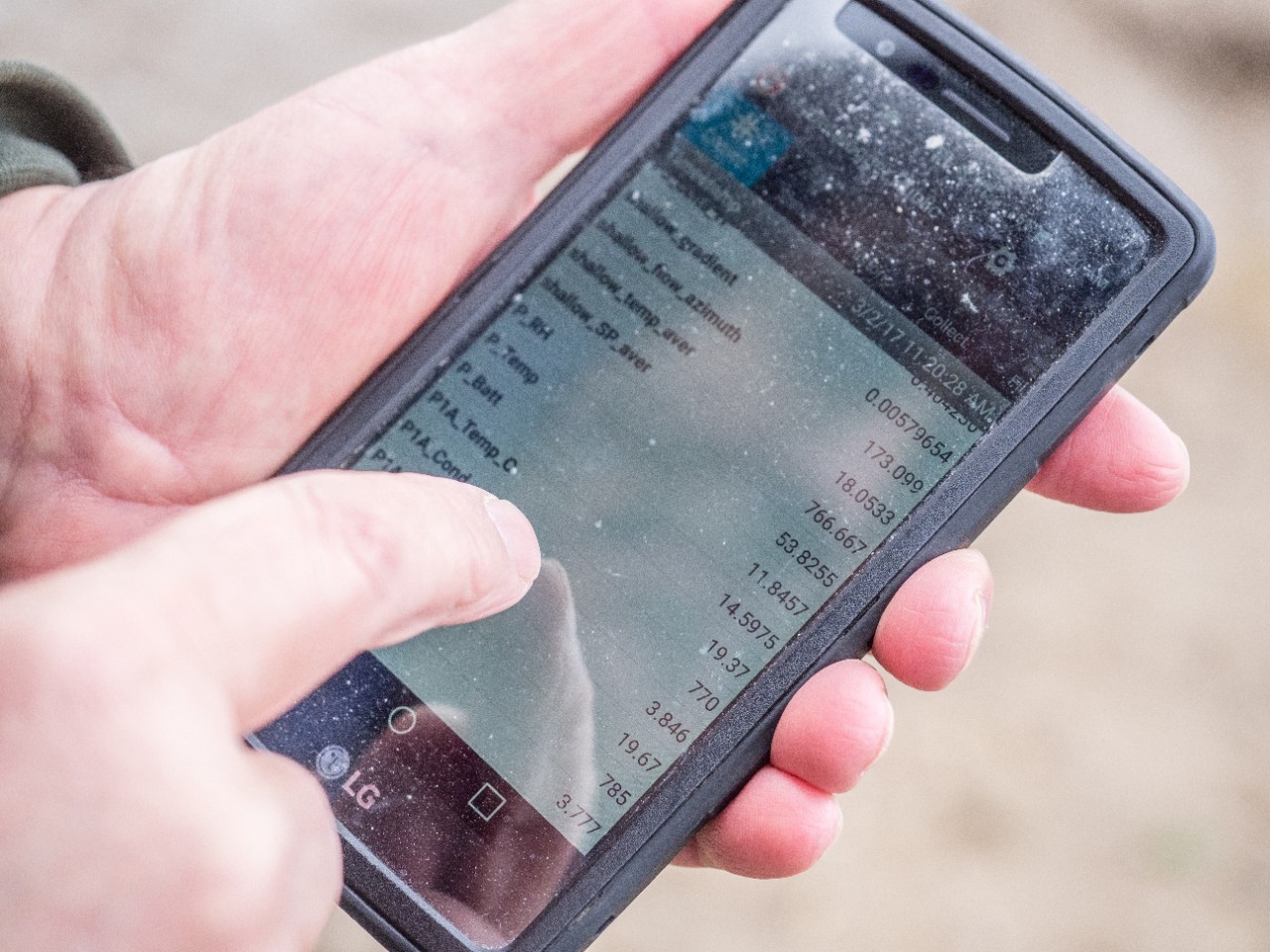 Geologists can track the changing dynamics of the groundwater in real time. Geology Professor Emeritus David Nash studied the effects of a recent storm that dumped as much as 4 inches of rain on parts of Greater Cincinnati.

This flow of water back and forth is the reason that flash floods are not as severe along the Great Miami River compared to rivers such as the nearby Licking that have a solid, impermeable bottom, he said. Likewise, this vast reserve of groundwater is the reason water in many Ohio creeks flows even during the driest summers.

Exactly how rivers interact with their aquifers is of particular interest to the Miami Valley since cities from Springfield to Dayton to Piqua draw their drinking water from wells near the Great Miami River.

UC geologists also will be able to test water samples to see how the exchange of river water and groundwater affects contamination levels in the groundwater, Townsend-Small said.

The Miami Conservancy District, one of the financial contributors, is following the project closely, District Manager Janet Bly said. The government agency was created after the Great Miami River flood of 1913. Today, it provides water monitoring and analysis, flood mitigation and education.

“We’re interested in promoting the sustainability of our water resources. But to do that, you have to understand it,” Bly said. “We know there are pollutants in the river. Their research will help show how those pollutants affect the groundwater.”

UC’s Nash likes to joke, “A river runs through us.” It plays on the title of the best-selling Norman Maclean novel and Robert Redford movie “A River Runs Through It,” but Nash said it also happens to be true.

“It’s running through our bodies, our agricultural fields, quarries, power plants for coolant. All water is recycled. How quickly it’s recycled — that’s the critical question,” he said.

The observatory has three pairs of monitoring wells at depths between 30 feet at the top of the aquifer and 90 feet at its bedrock bottom. Sensors in the wells lead to a 25-foot-tall steel pylon mounted with solar panels and communications gear that records and transmits water readings every 15 minutes.

Nash followed the data closely during the March 1 storm that dropped as much as 4 inches of rain across southwestern Ohio, according to the National Weather Service.

It is difficult to study a river valley during a flood because of the treacherous floodwaters, Nash said. But the instrument pylon was built tall so its cellular modem can send data even during the next historic 100-year flood. The geologists also can pump 500 gallons per minute from one of the wells to measure the changing flow of groundwater at different times of year.

The observatory is named for the late Charles Vernon Theis, a graduate of multiple colleges at UC who was considered one of the most influential hydrogeologists of the past century. His original mathematical equation for studying the size and flow of groundwater is still used today and is taught at universities around the world.

The observatory was built through a low-cost land lease from the Great Parks of Hamilton County and through financial support from Duke Energy Foundation, Miami Conservancy District and UC’s Office of Research and Office of the Provost. 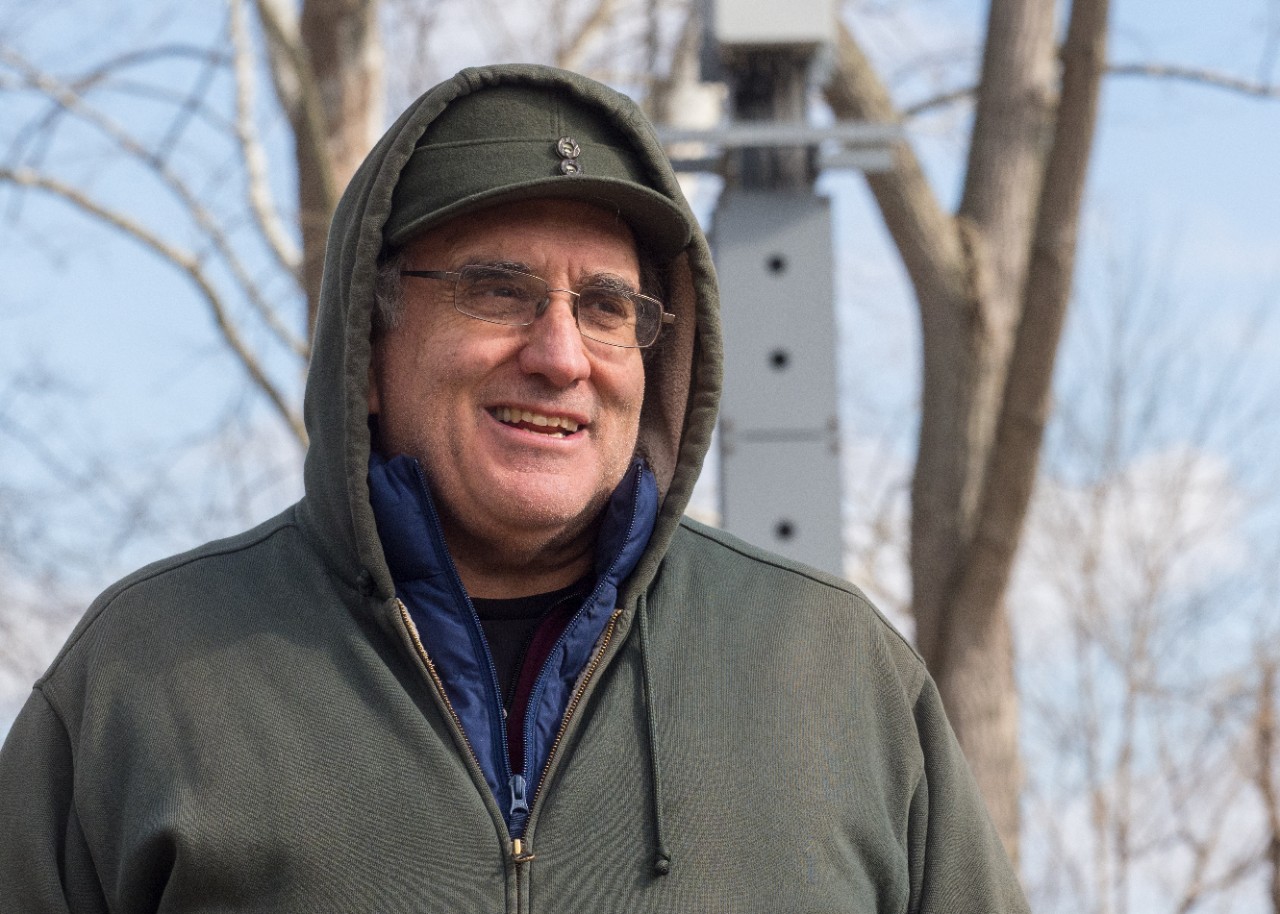 David Nash, professor emeritus of geology, said Ohio's plentiful aquifers are the envy of many states that have to ration water supplies. 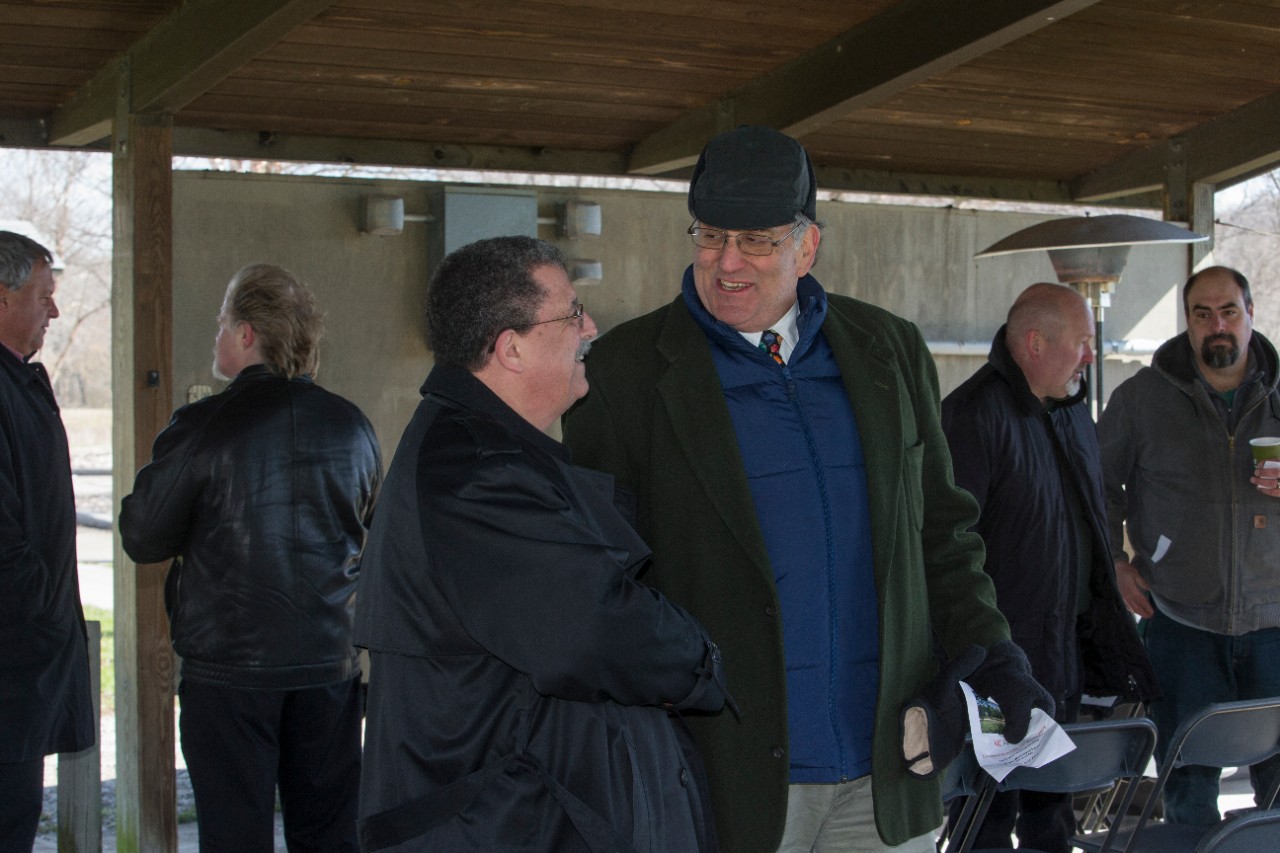 William Ball, dean of the UC College of Medicine, left, talks to Nash at the opening ceremony. 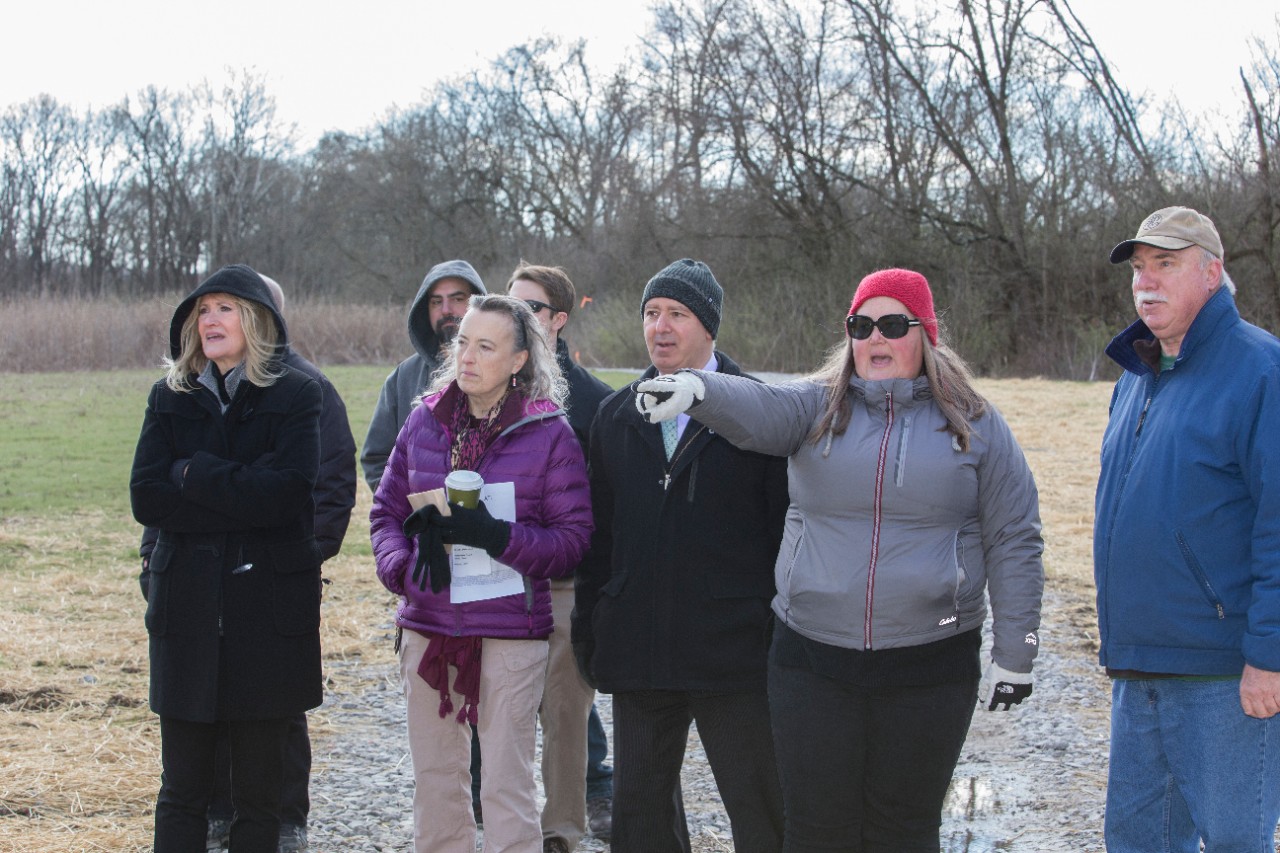 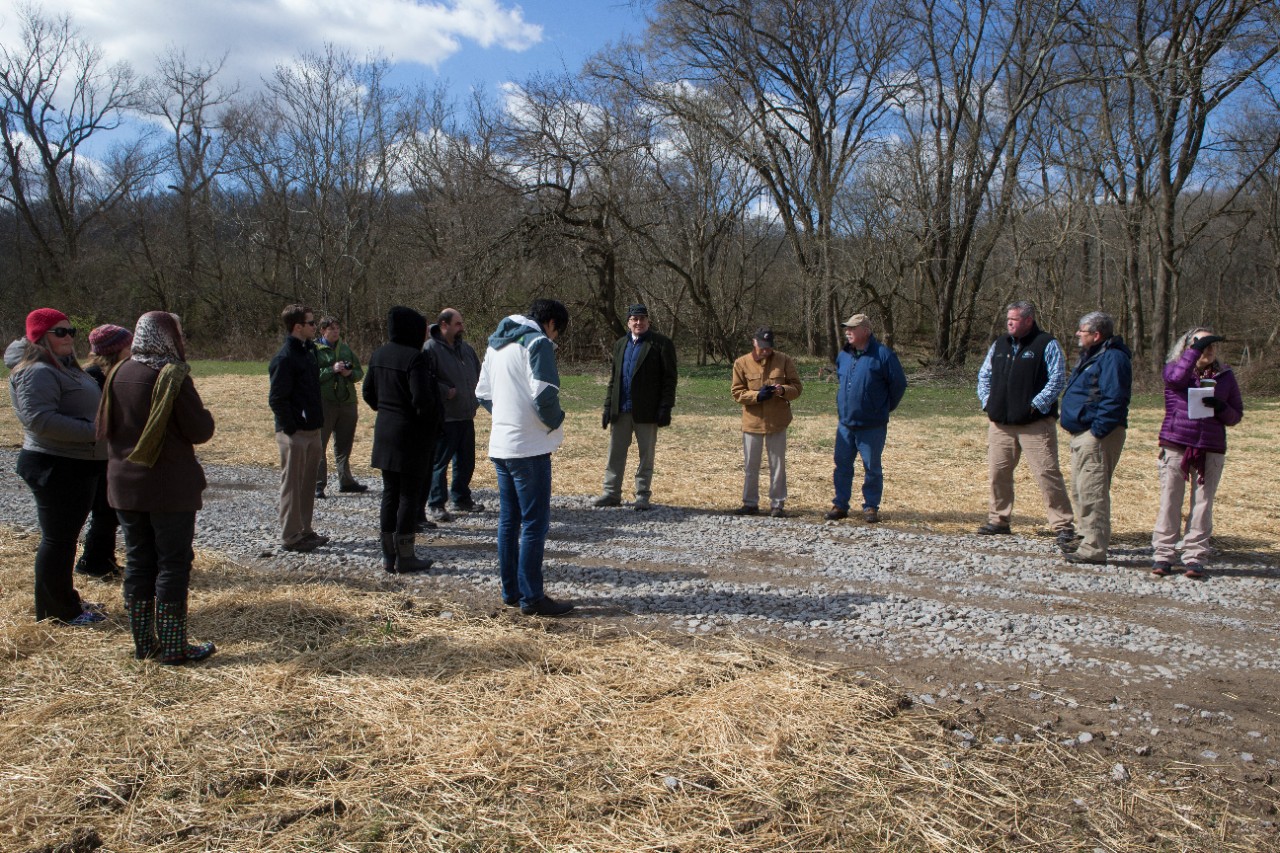 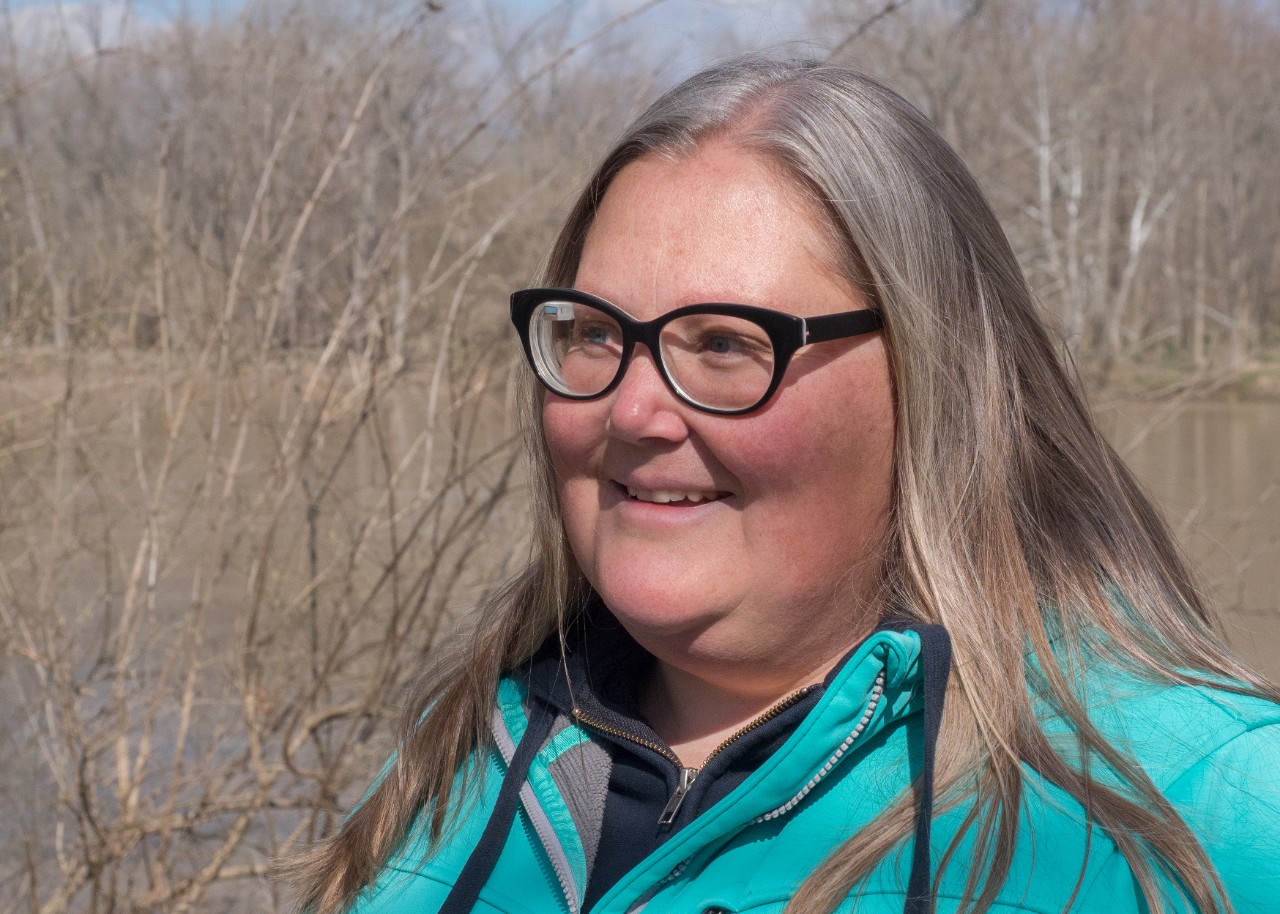 Associate Professor of Geology Amy Townsend-Small said the UC project has implications for many other river systems in the Midwest. 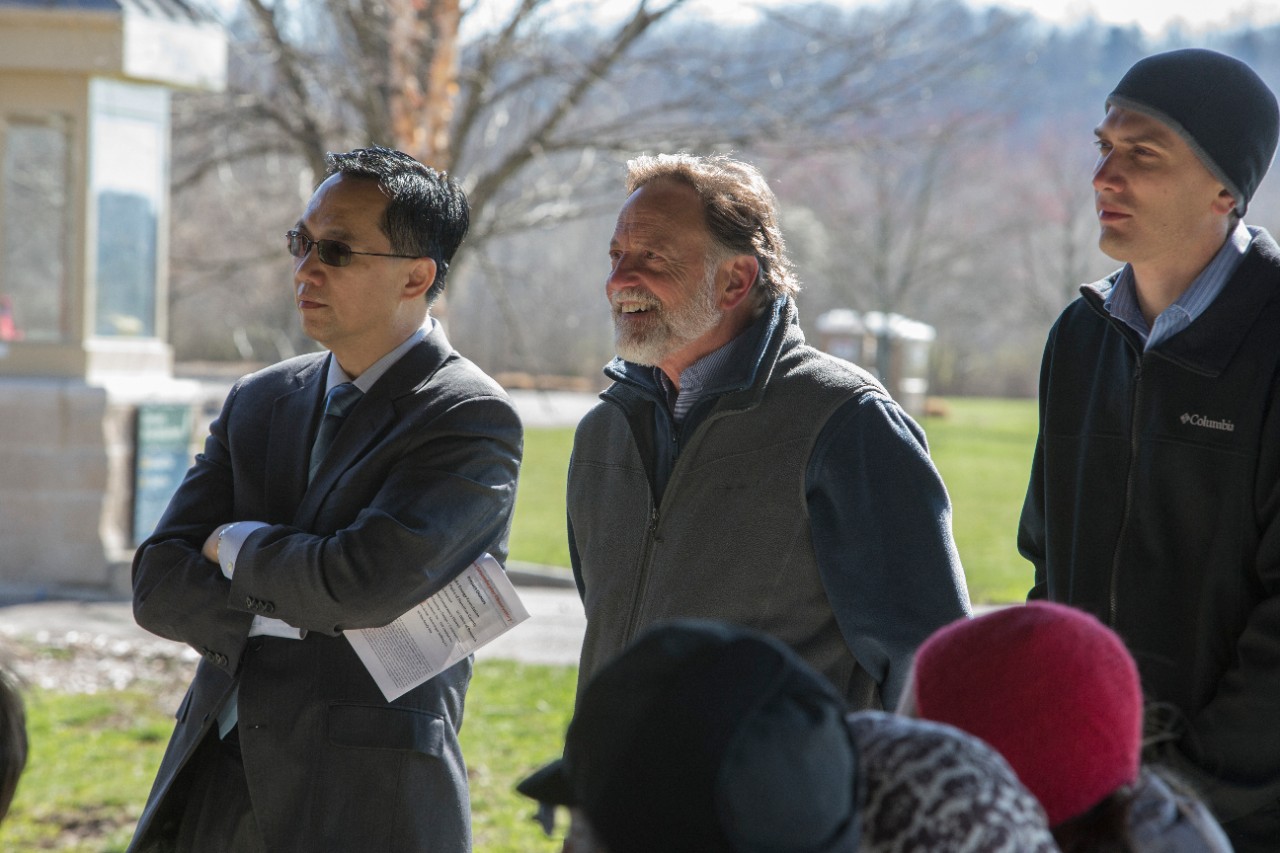 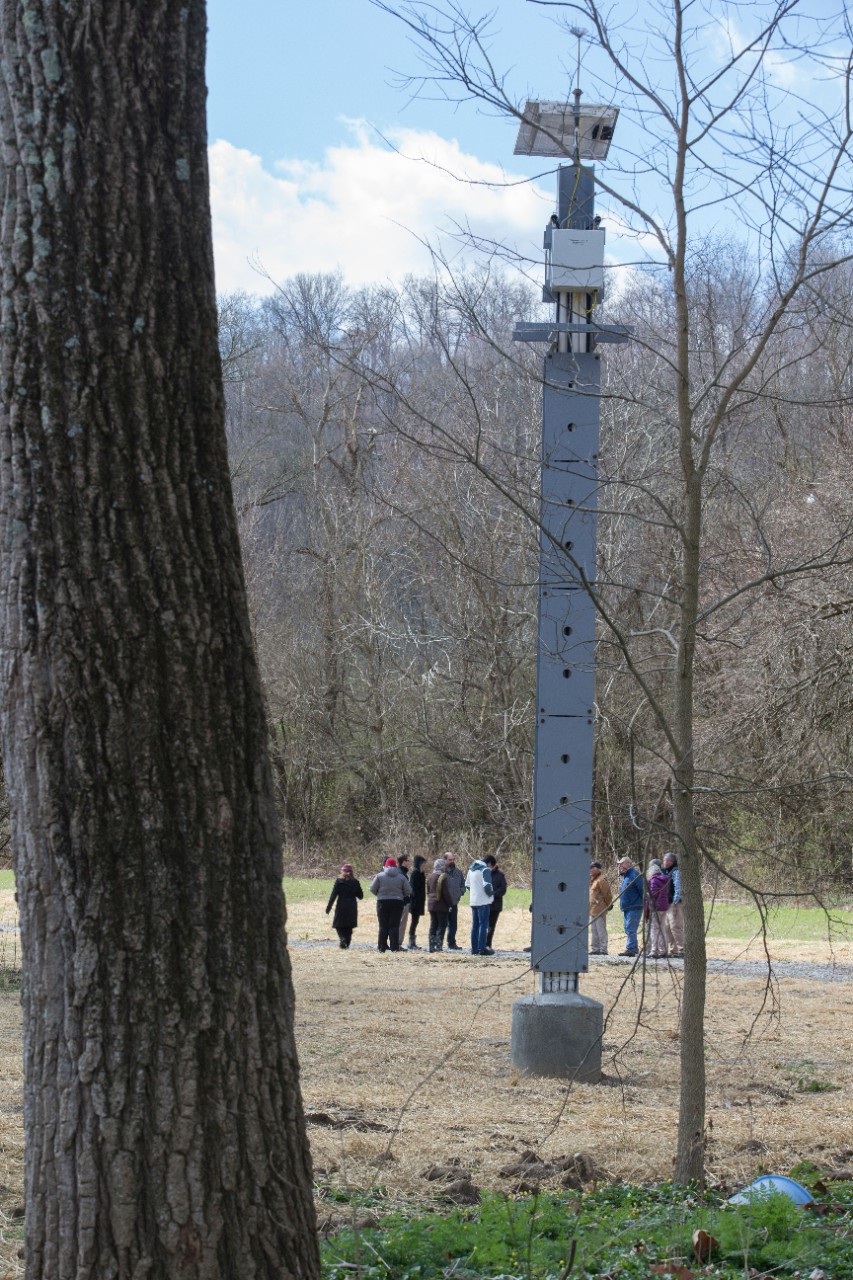 The new observatory was built through the financial support of the Duke Energy Foundation, Great Parks of Hamilton County, the UC Office of the Provost, the UC Office of Research, the Miami Conservancy District, The UC Office of Planning, Design and Construction, Terracon, THP Limited, The Kleingers Group, Scherzinger Drilling Co. and All-Rite Ready Mix.