Hookah-tobacco users might want to rethink how they heat up their water pipes, based on research by chemists at the University of Cincinnati.

The gooey, flavorful tobacco in hookah pipes is normally burned with specially made charcoal briquettes, which can contain heavy metals or other toxins. But a study by UC graduate student Ryan Saadawi found that a popular alternative – electric heating disks sold in most tobacco shops – might be far more harmful to your health.

“We’re never supposed to be surprised in science. I was shocked and excited to open a whole new field of research just based on temperature,” said Saadawi, lead author of a paper he presented April 2 at the American Chemical Society conference in San Francisco, California. 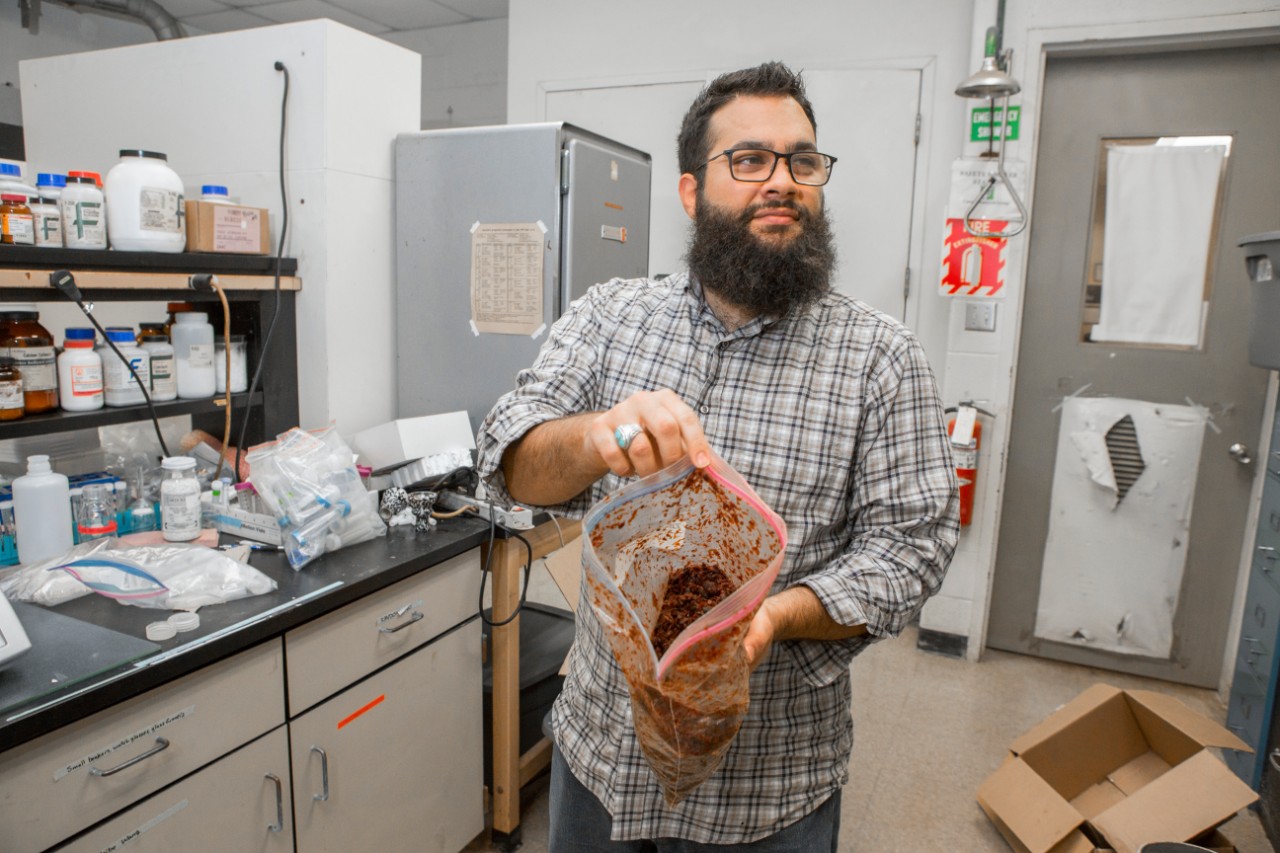 Saadawi, 30, of Cincinnati, has been studying this popular form of tobacco use for years.

The practice of smoking tobacco with a water pipe called a hookah began hundreds of years ago in southeast Asia and spread across the Middle East. Today, hookah tobacco is smoked around the world. Many cities in the United States have hookah cafes where people get together to smoke socially.

Unlike e-cigarettes, which heat liquid into a vapor, hookah pipes burn real tobacco mixed with glycerine and flavorings.

The researchers designed an experiment to examine the toxicity of hookah smoke on human lung cells. In particular, Saadawi wanted to measure the toxic effects of the charcoal commonly used to burn tobacco in hookah pipes.

“I do not condone any smoking. I’m not saying quit smoking cigarettes and start hookah. All smoking is bad for you.”

For the latest study, the UC researchers compared two types of commercially available charcoal using the same hookah tobacco. A chemical analysis revealed one charcoal contained a higher concentration of heavy metals such as cadmium, arsenic and lead than the other.

Then Saadawi and his research team at the McMicken College of Arts & Sciences compared these results to hookah smoke from tobacco burned electronically by a ceramic disk (sometimes called e-coal). They figured the electronic heat source would provide a good control group to compare with the different charcoals. Instead, they found something surprising.

The smoke generated by the electronic heat source killed a whopping 80 percent of the lung cells.

“The results didn’t make sense. My hypothesis was to find more dead lung cells in toxic charcoal,” he said.

He suspects the culprits that killed the lung cells were volatile organic compounds such as polycyclic aromatic hydrocarbons, which are released when organic material such as tobacco burns. These compounds have been linked to a variety of cancers, including lung cancer.

While both heat sources initially heated the tobacco to 300 degrees Celsius, the electronic coal consistently kept the tobacco hotter than the burning charcoal, which drops in temperature with every inhalation from the hookah pipe.

"The contaminated charcoal had the potential to be more toxic. But that wasn't the reality," Saadawi said. 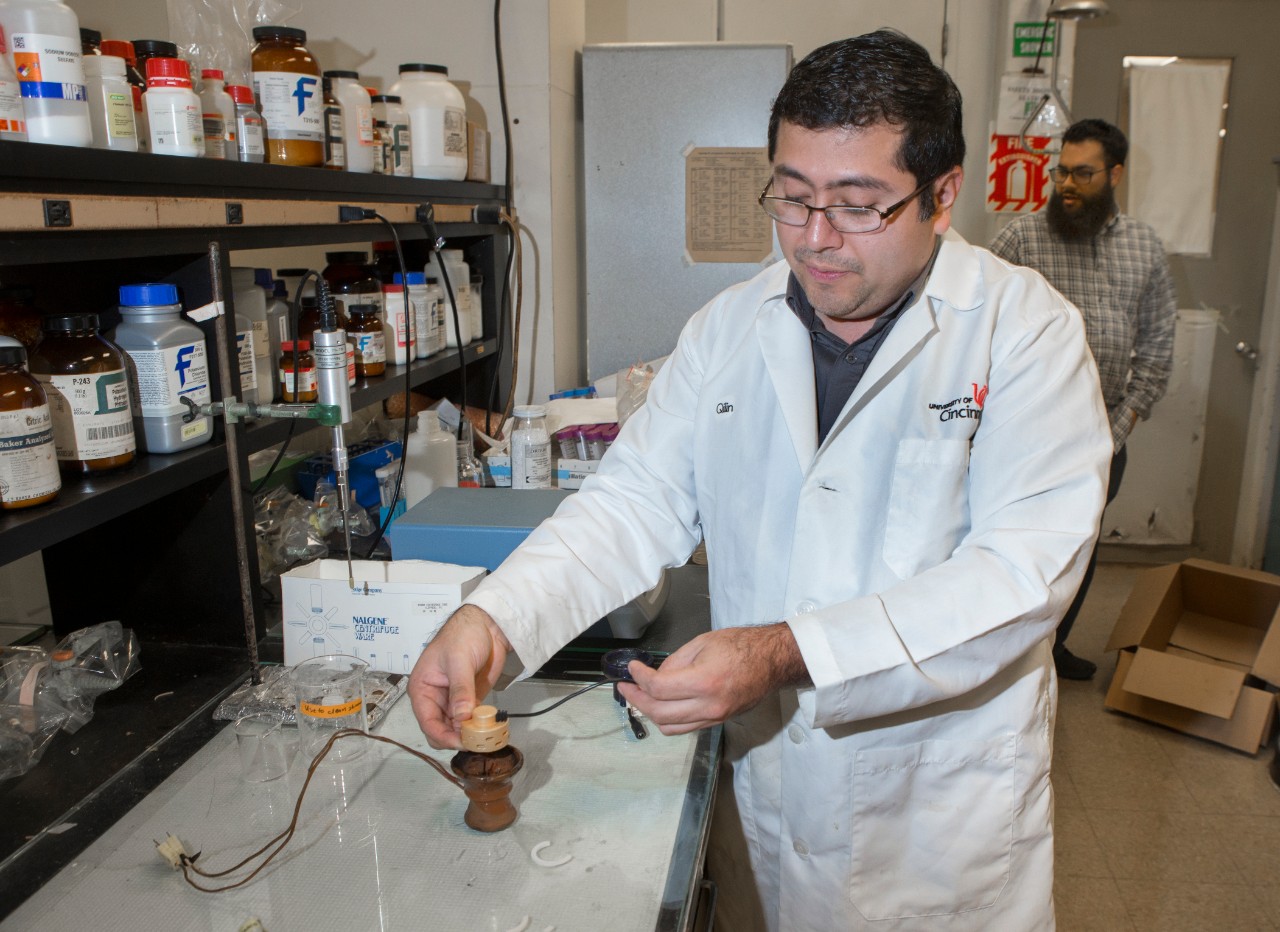 Landero Figueroa is continuing the hookah research with undergraduate students. Now they are trying to narrow down which family of hydrocarbons is most harmful.

The team started the research under the late UC chemistry professor Joseph Caruso, who died in 2015.

Saadawi is quickly becoming an expert in hookah-tobacco science. The research team’s literature review had found tens of thousands of published studies on cigarette smoking but comparatively few on the use of a hookah. The challenge was designing an experimental protocol from scratch, Saadawi said.

Previously, he and other UC researchers studied the toxicity of steam stones, porous rocks infused with flavoring that are heated in hookah pipes instead of tobacco to create a smoking vapor. And in a comparative study, Saadawi found that hookah smoke contained lower concentrations of four heavy metals he isolated compared to cigarette smoke. 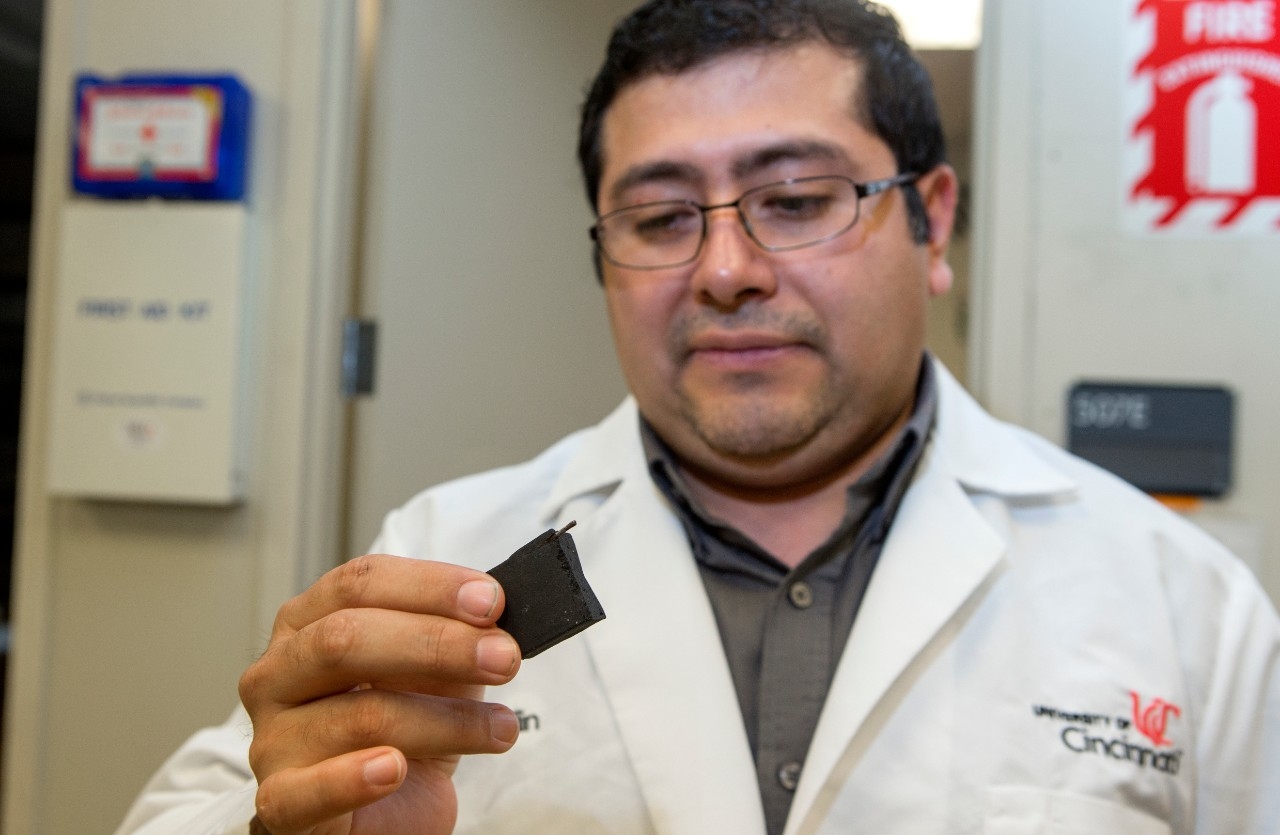 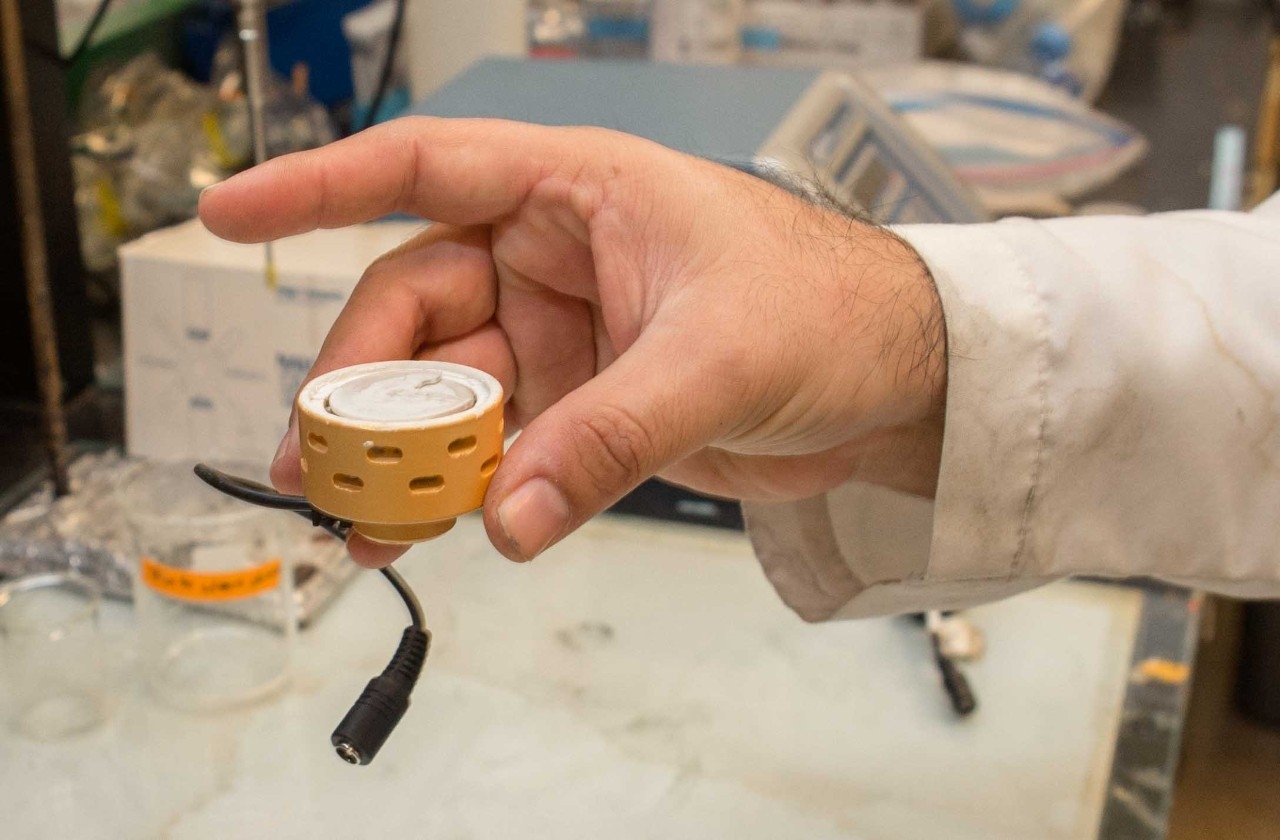 UC assistant professor of research Julio Landero Figueroa, left, holds up a piece of commercially available hookah charcoal that contained a nail. The UC study found that some hookah charcoal contained heavy metals and other toxins. But e-charcoal, the ceramic disk that uses electricity to heat tobacco, right, consistently burned at a higher temperature, possibly releasing more toxins in the tobacco smoke.

The UC research is timely as the U.S. Food and Drug Administration exerted regulatory authority over hookah tobacco for the first time last year.

The UC research is especially relevant because use of hookah tobacco is on the rise among high school and college students, according to Centers for Disease Control and Prevention.

Nearly one in five high school students reported smoking hookah pipes during the previous year, according to a 2014 study by New York University’s Center for Drug Use and HIV Research published in the journal Pediatrics. That study found that many adolescents and young adults believe hookah tobacco is less harmful to their health and less addictive than cigarettes, a claim that has not been proven, Saadawi said.

“It’s not an easy question to answer: which one is worse?” Saadawi said. “If you wanted to really answer it, you’d have to do many more studies.” 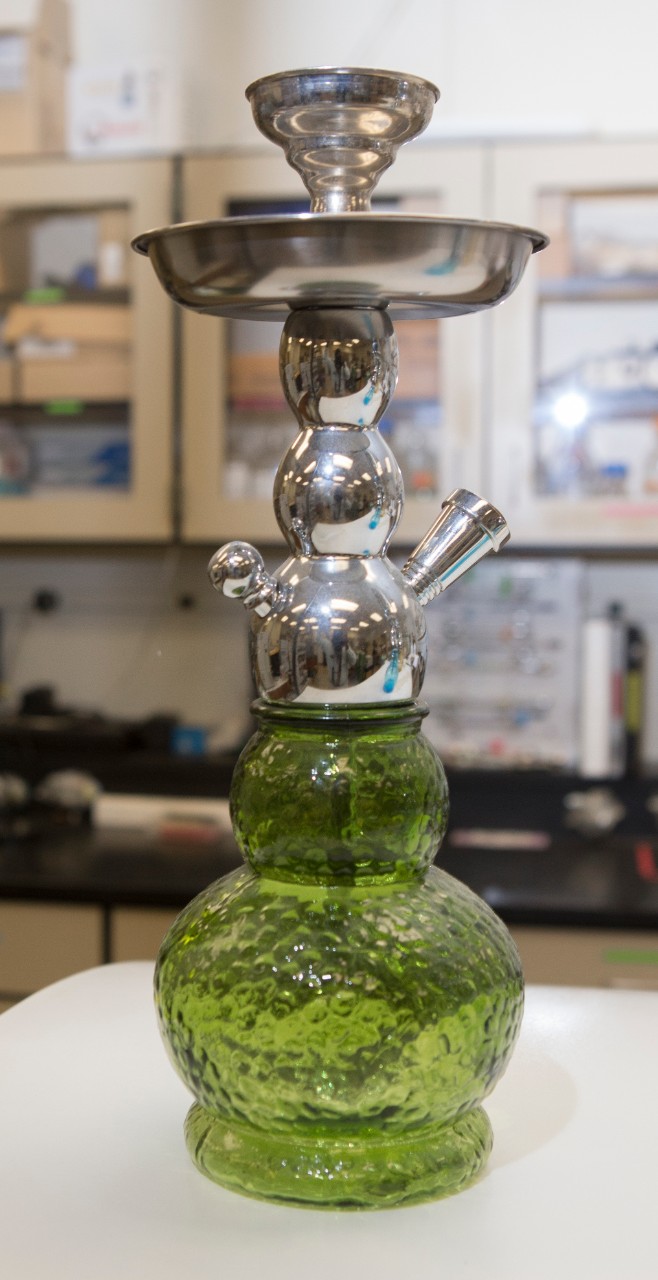 Saadawi conducted his research in the medical lab of associate professor Michael Borchers, an immunologist and molecular biologist at the university.

Borchers studies the chronic health effects of cigarette smoking in his lab at the UC College of Medicine. He also examines the immune function of smokers for the Veterans Administration. In particular, he studies chronic obstructive pulmonary disease or COPD.

“It destroys lung tissue where gas exchange occurs and causes bronchitis and inflammation around the airways,” he said.

Borchers said it is worthwhile to examine whether hookah smokers can succumb to the same kinds of cardiopulmonary diseases as chronic cigarette smokers.

But there is far more variability in smoking hookah pipes compared to cigarettes, he said. Some hookah smokers might inhale more or less smoke than others.

“They say the dose makes the poison. The dose is really a huge part of it,” he said. “If you just nip at it for 20 minutes, you’re probably not going to smoke a cigarette’s worth of tobacco. But if you take lots of deep draws, you’ll smoke three cigarettes’ worth.”

Over time this can make a big difference in exposure, he said.

“It usually takes a long time to get sick from smoking,” he said.

Saadawi, a former smoker, said he doesn’t want anyone to misinterpret his studies to suggest that hookah is somehow better for your cardiovascular health than cigarettes.

“I do not condone any smoking. I’m not saying quit smoking cigarettes and start hookah,” he said. “All smoking is bad for you.” 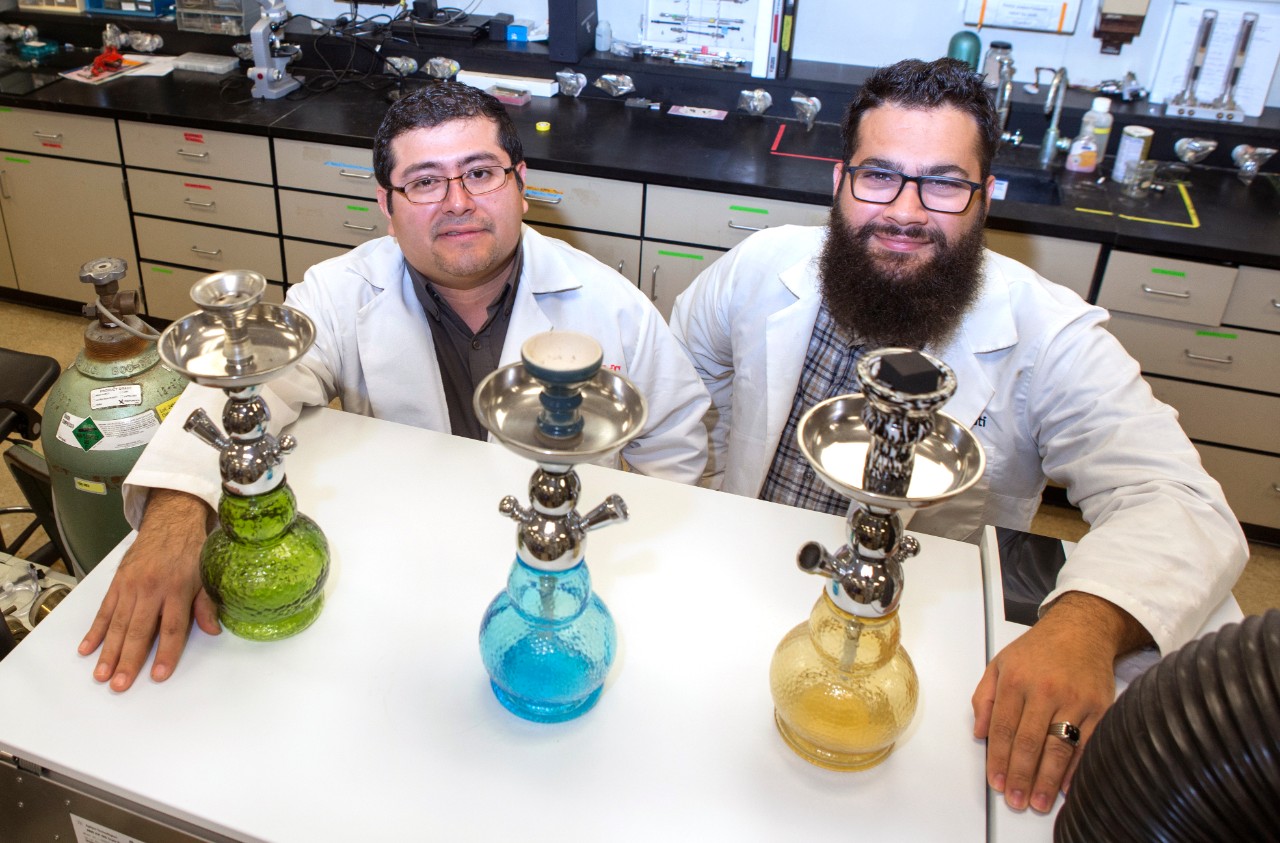 Do you like chemistry? At UC, chemistry students study real-world problems. Apply to the Department of Chemistry or explore other programs on the undergraduate or graduate level.