The James P. Kelly Athletics Hall of Fame is on display on the first floor of the Lindner Athletics Center on the University of Cincinnati campus.

Yearning for the wall

By the end of our interview, tears were streaming down his 90-year-old cheeks.

It's the day after Jack Laub's induction into the University of Cincinnati’s James P. Kelly Athletics Hall of Fame on Nov. 3, 2016. Laub is sharing his story over lunch at the Bearcat Lounge inside the Kingsgate Conference Center on UC's campus.

He’s dressed head to toe in charcoal and black Bearcats gear, an official Under Armour warmup suit that he says UC gave him as part of his visit. “This is the same as the team wears,” he smiles, as he tugs at his clothes before returning to his lunch — a prime rib sandwich and tomato soup combo.

Laub, A&S ’50, guesses that he must be the oldest person to ever have been inducted into UC’s hall of fame. If so, it’s just one more of a slew of somewhat obscure firsts in his life. For example, he holds the distinction as the only student athlete in NCAA history to play six varsity years. Plus, he’s now been inducted into a total of four halls of fame, with the latest honor, the Brooklyn Jewish Hall of Fame, coming just days after UC’s. In addition, he and teammate Dick Dallmer became UC’s first-ever draftees into the NBA in 1950. Laub gave up that gig to become UC’s first-ever assistant basketball coach, a scouting position he held until 1951, when he helped UC land future legend Jack Twyman. 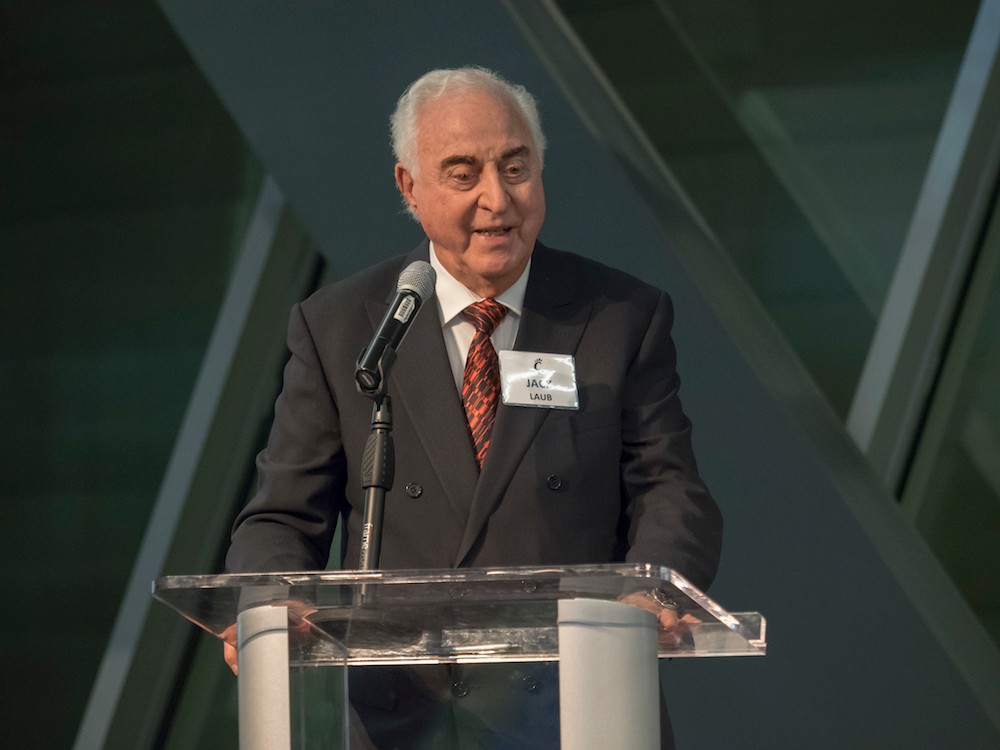 Jack Laub shares his gratitude with the audience during UC's hall of fame ceremony. photos/Jay Yocis [+] 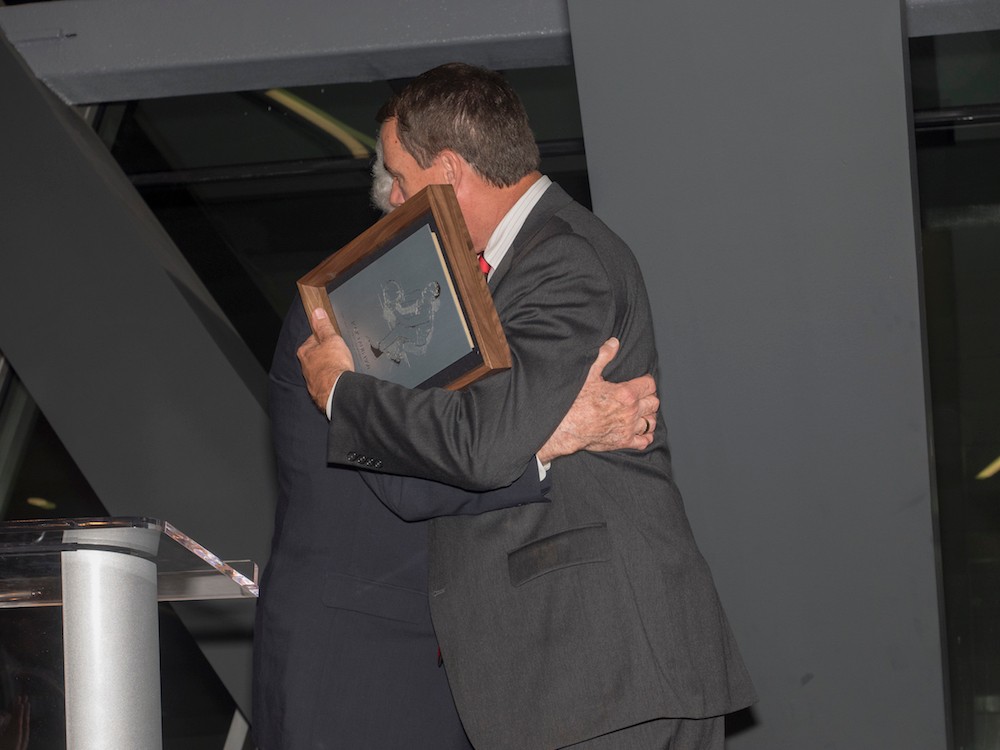 Laub and Mike Bohn, UC athletics director, embrace after he leaves the podium. 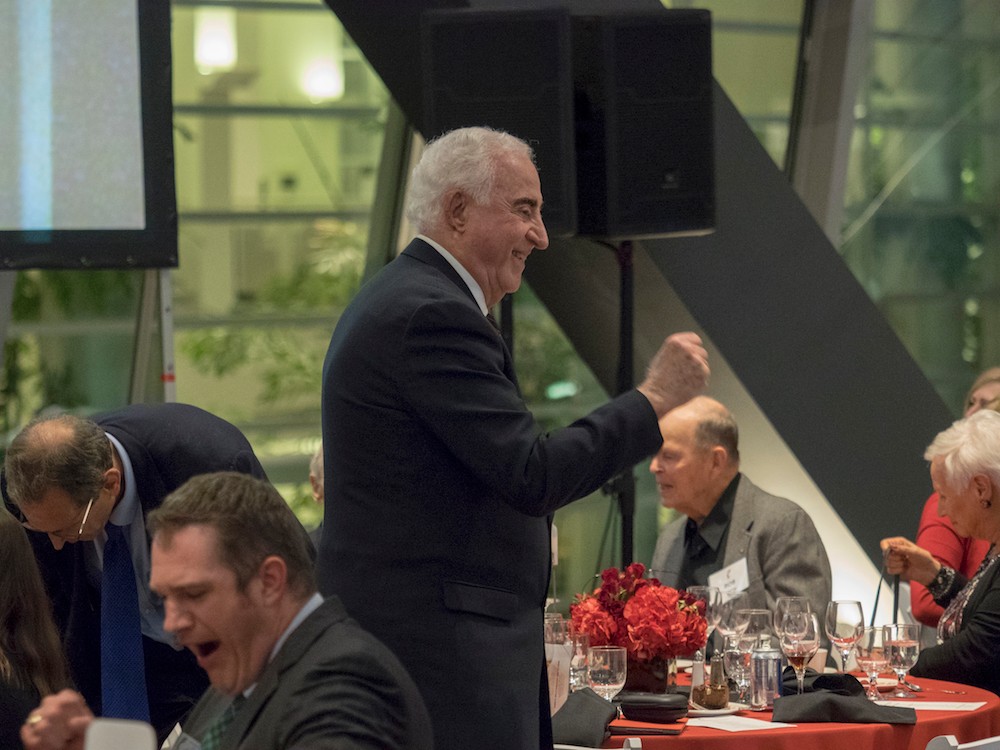 Laub offers a fist-pump as he heads back to his table with family and friends.

It’s been 70 years since “Black Cat” Jack Laub came to Cincinnati from New York and first pulled his Bearcats jersey over his 6-foot-3 frame. That was December 1946, and Laub was fresh from his World War II service in the Merchant Marine. Back then, UC had less than 15,000 students, and the basketball team played inside Schmidlapp Hall, “a bandbox of a gym” now known as the Dieterle Vocal Arts Center that overlooks the south end of Nippert Stadium.

As Laub tells it, he got a basketball scholarship to UC strictly on the word of acquaintance and fellow New Yorker Alvin Rubenstein, UC’s point guard, who convinced then-Bearcats coach John Wiethe to give Jack a shot. Laub had a rare two years of varsity experience at the City College of New York prior to WWII, so he had multiple scholarship offers including Yale, George Washington and Louisville, but each were going to require him to sit out a year to comply with eligibility requirements. UC’s Mid-American Conference, however, allowed veterans to start over and play for four years, so he could start right away.

Laub said he also chose to play in the Queen City because UC had a good medical school. As it turned out, he graduated with a degree in psychology and would ultimately have a long and lucrative career as a pharmaceuticals executive and help pioneer the idea of discount drugs. He established the first mail-order pharmacy in New York, and UC’s College of Arts & Sciences named him a distinguished alumnus in 2010. 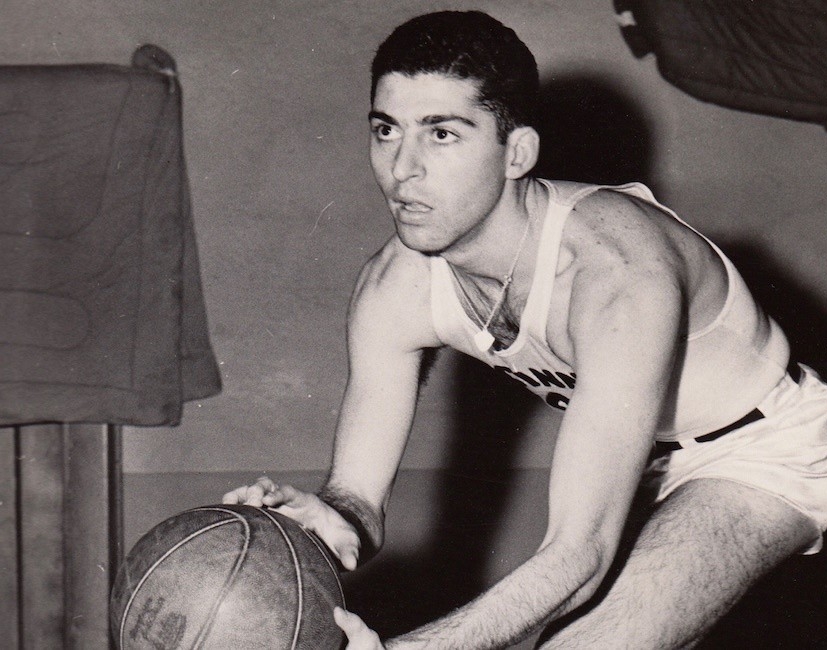 Jack Laub played basketball at UC from 1947 to 1950 and helped the Bearcats to four straight Mid-American Conference championships. Photo/Cincinnatian Yearbook

Back when he was a 20-year-old who had just arrived at UC, however, Laub was a long way from New York’s Brighton Beach near Coney Island, where he was born in 1926. He, his parents and five brothers lived in the flat above Laub’s, a kosher restaurant his family opened after coming to America from Poland to escape escalating persecution in the early 20th century.

That flat was where young Jack fell in love with the game of basketball. His older brothers taught him to shoot at about age 5 when they cut a circle in the seat of one of the restaurant’s cane chairs and hung it up so he could practice.

“I never had a toy in my life,” he recalls of growing up in the era of the Great Depression. “But I didn’t care. I had great brothers.”

That love of brotherhood never left him though, and it took on a new and deeper meaning in Cincinnati when he and his teammates bonded despite their differences. Laub seemingly kept everything that was ever written about him, yet his favorite article is a simple 6-inch column of type that appeared in the Cincinnati Post in 1947. Ironically, the story wasn’t on the sports page and never mentions Laub or any of his fellow players by name. Instead, the piece was an editorial that focused on the diversity of UC’s squad — “brothers working together loyally for the good of the team.”

“The team contains two Jewish boys, a Catholic … a Lutheran Sunday school teacher and a Methodist,” the article continues. “What a great team mankind could make if, like UC’s basketball team, it served loyally for the sake of the whole team, and what difference does a brother’s religion, race or color make?” 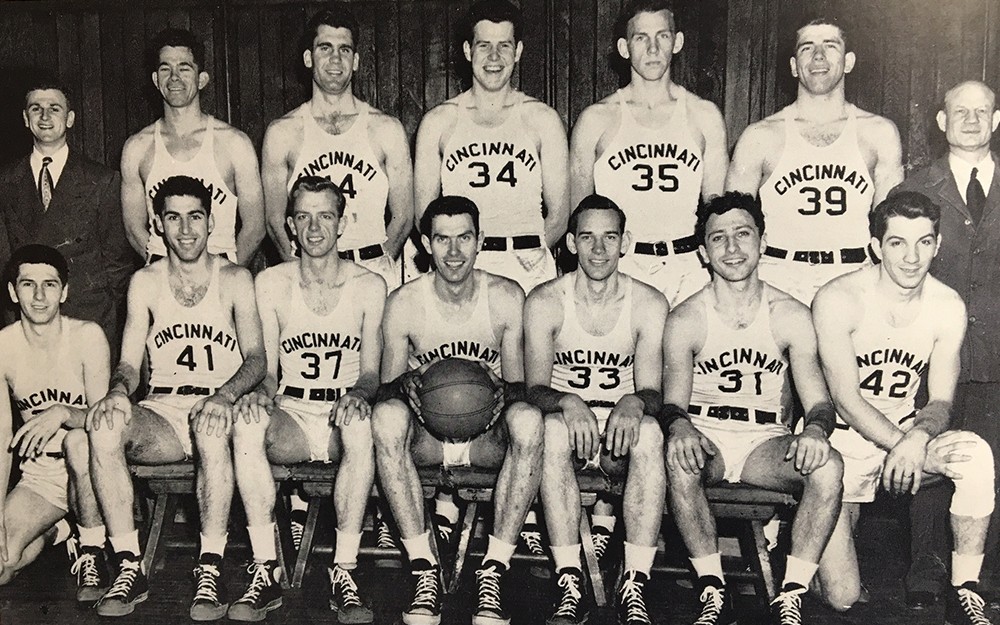 Playing for the fiery Wiethe — a lawyer who took over as the Bearcats coach in 1946 — the dissimilar team of returning World War II vets turned in not just a rare winning season but UC’s first conference championship since the mid-1930s. Wiethe called Laub “Black Cat” because he had very dark hair and would crouch down low to defend smaller players. With a coach that liked nicknames, Dallmer became “Bones” and Rubenstein got the moniker “Supermouse.” 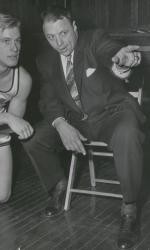 They finished 17-9 that year and won the Mid-American Conference crown, a title UC hung onto for five straight seasons. Along the way, UC basketball rose to national prominence for the first time. Laub’s teams finished 77-27 over four years, including a historic upset over Long Island University (LIU) at Madison Square Garden in 1950. The papers called Cincinnati a “shoo-in” for the 12-team National Invitation Tournament. Eligibility complications cropped up, however, precluding Laub (in his sixth year) and Rubenstein (in his fifth) from playing.

UC missed the opportunity, but both men would later gain praise for their “personal integrity” when it came to light in 1952 that they turned down a bribe their senior year from a promoter attempting to fix college basketball games. Players from other teams, including the 1950 LIU squad UC beat, admitted to taking part in the point-shaving scandal.

“When I look back, the thing that gives me the proudest feeling is that I turned down the bribe,” Laub wrote in a guest piece for Champion Magazine published by the NCAA earlier this year.

Laub points out that his era of Bearcats basketball became largely forgotten, in part due to the program’s subsequent success — overshadowed by the likes of such giants as Jack Twyman, Oscar Robertson and the national championship teams of 1961 and ’62.

He recalls once even contacting an author who had written about Cincinnati basketball to complain that he had overlooked UC’s post WWII teams.

“I called him up, and I said, ‘I’m very upset with this book. In fact, I’m sending it back. I don’t even want to keep it in my library.’” 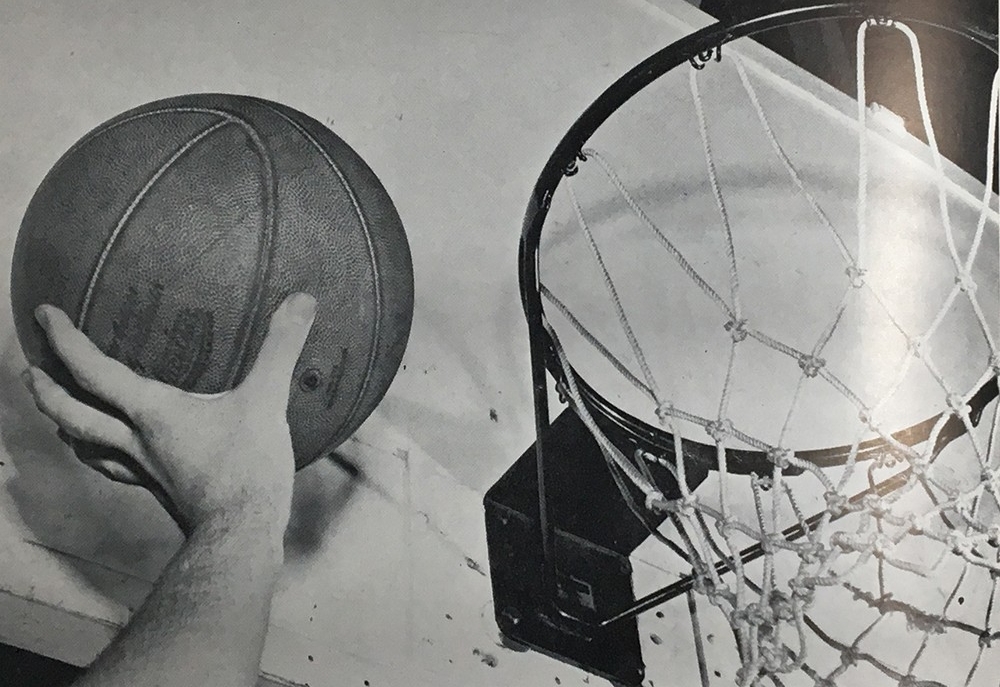 Though few history books recall them, Laub will never shake the memory of his Cincinnati mates, many of whom remained lifelong friends. That human connection helps explain why — even after seven decades — being inducted into UC’s hall of fame still stirs such deep emotions.

“You can't believe it,” Laub pauses, then cries, then collects himself, when asked why having his plaque hang in the Lindner Athletics Center has been so important to him. “It is very emotional for me. Our team — we came from very different backgrounds. Yet, we became like brothers. To this day, I wanted to be there with my brothers. To have my picture on the wall next to my teammates is just a great feeling.”

Laub runs through the lineup of friends who made it on the wall before him. “Allie” Rubenstein, who he roomed with in the basement-level dorms of Nippert Stadium, was inducted in 1995. Others included Jim Holstein (inducted in 1980), Dick Dallmer (1984), Ralph Richter (1989), Bill Westerfeld (1990), Tay Baker (1996) and even their coach John Wiethe (2006). These athletes are among a fraternity of just over 200 men and women who have received the honor since it began in the mid-1970s. 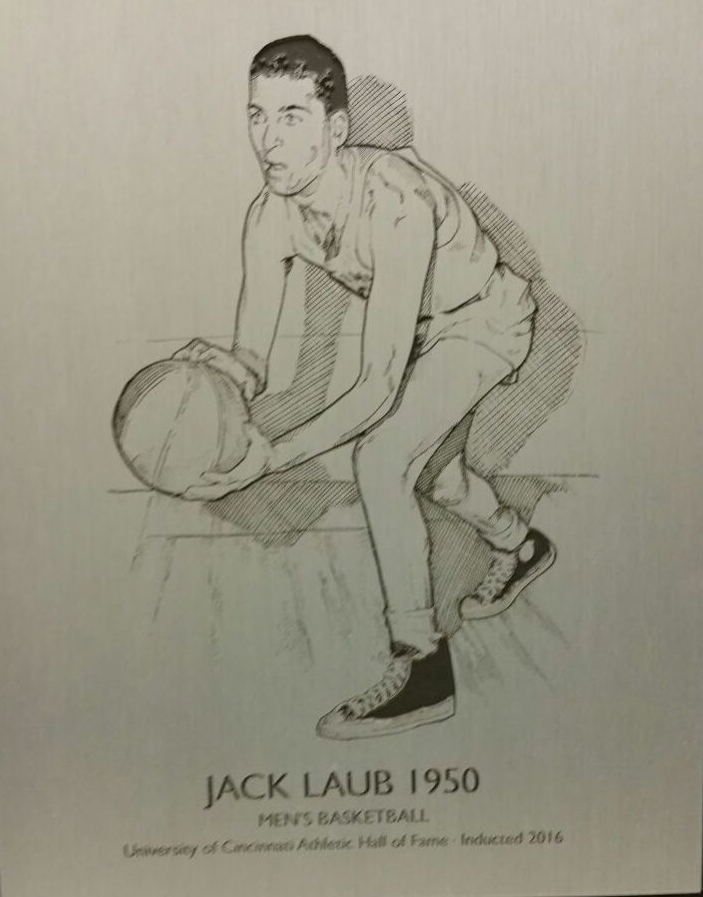 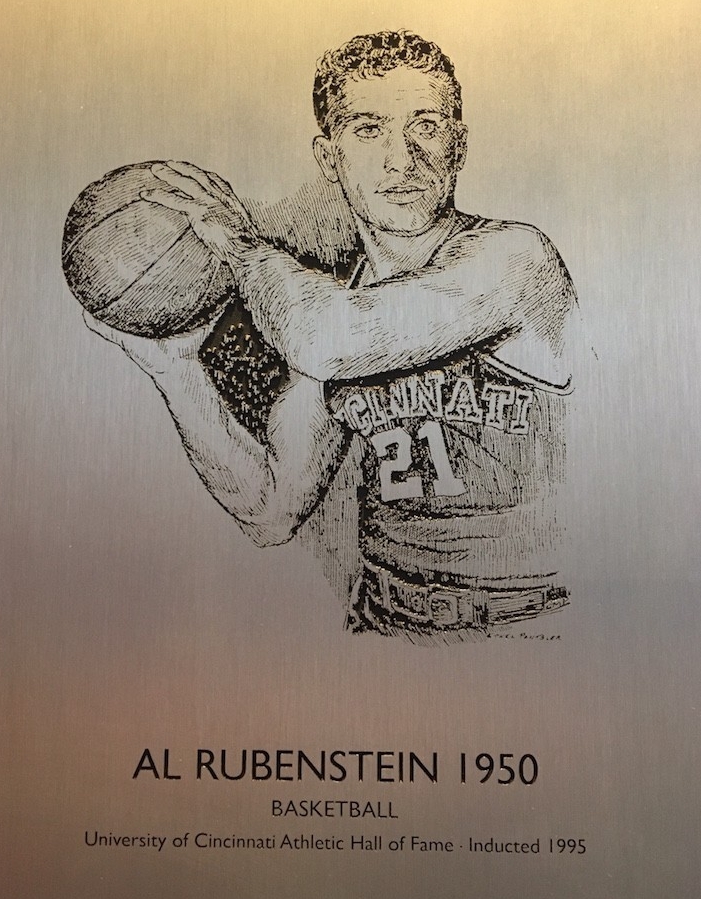 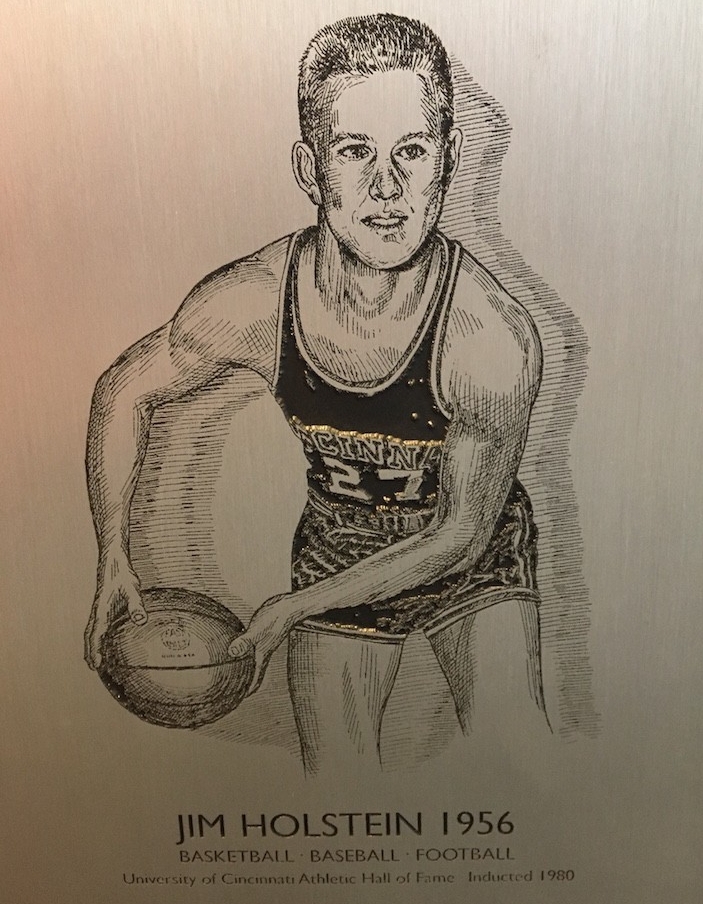 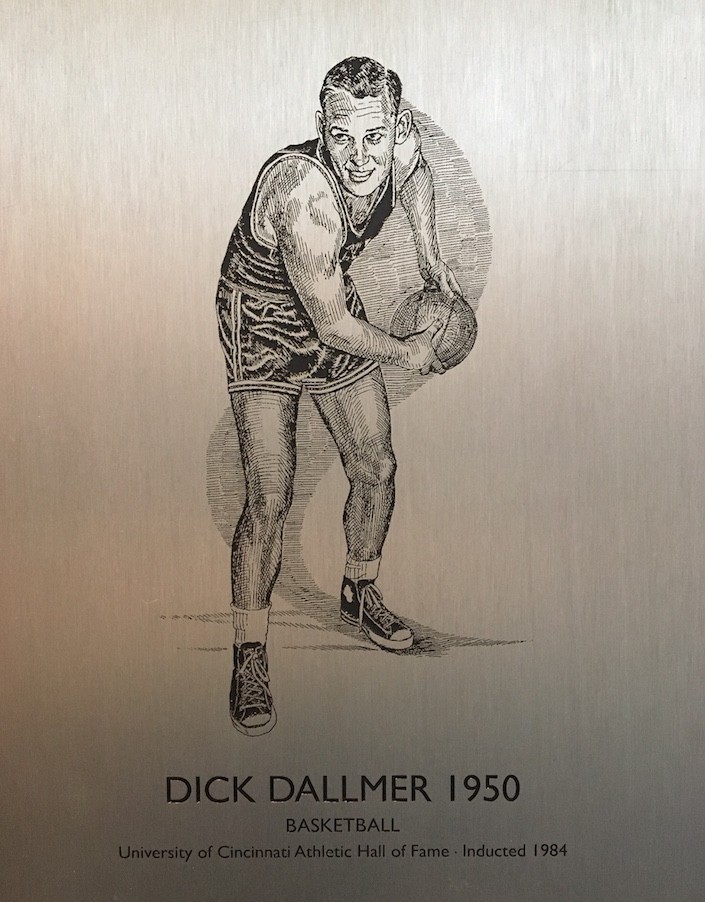 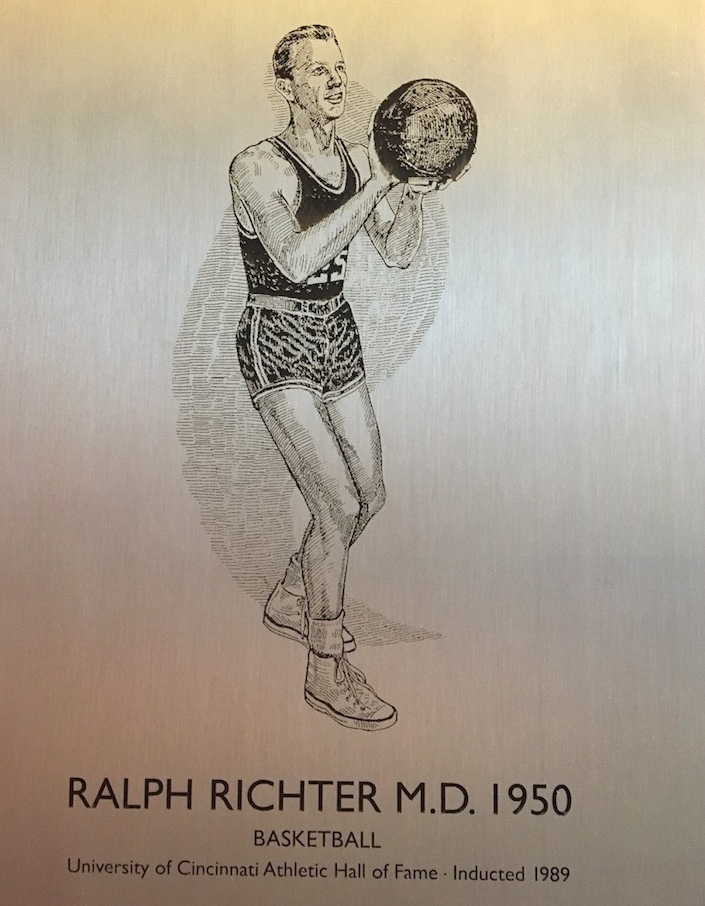 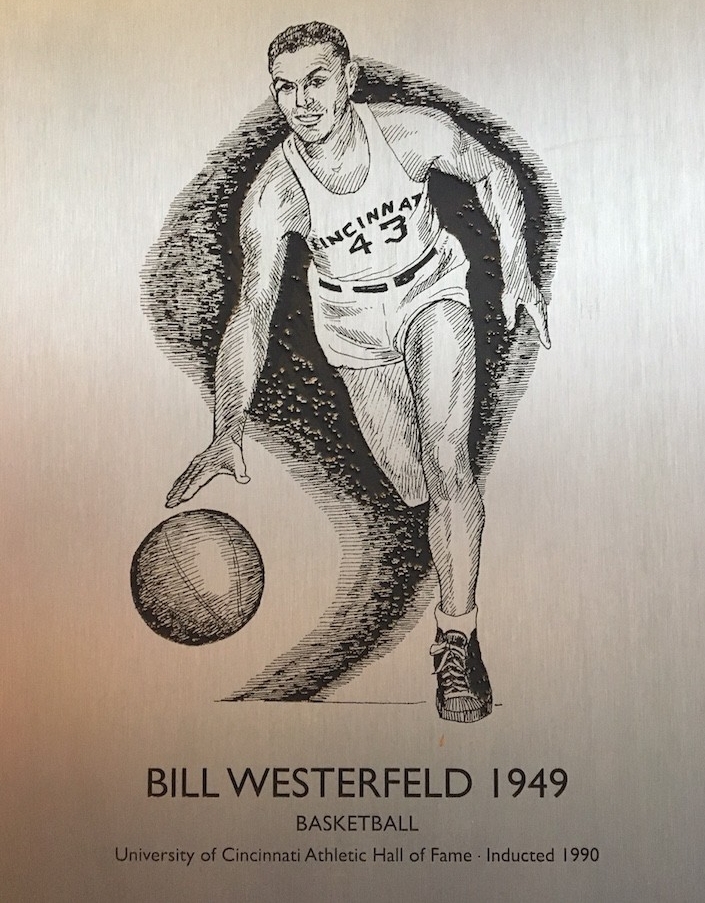 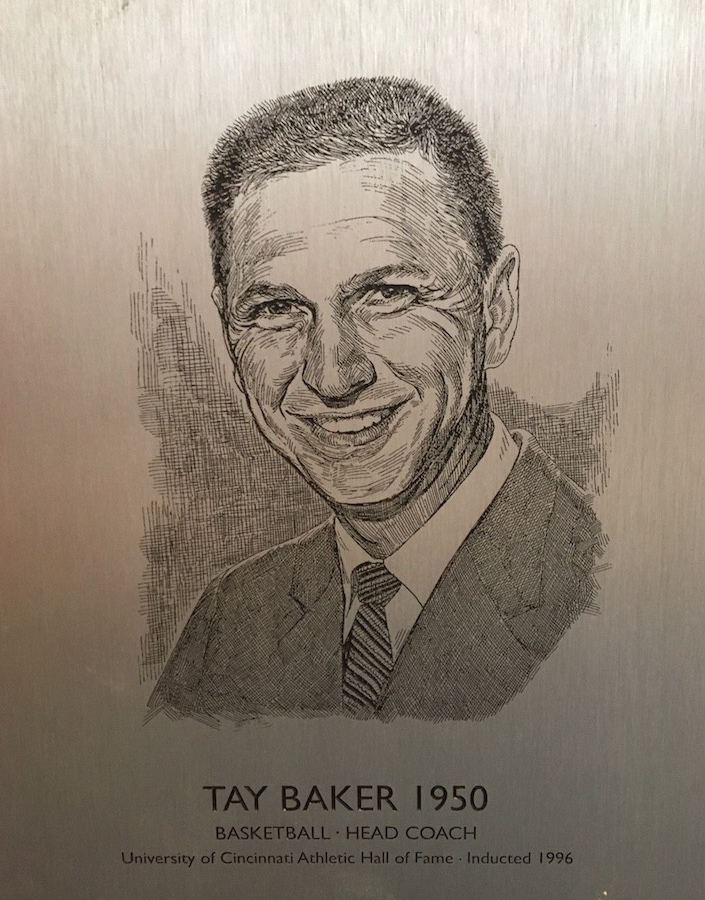 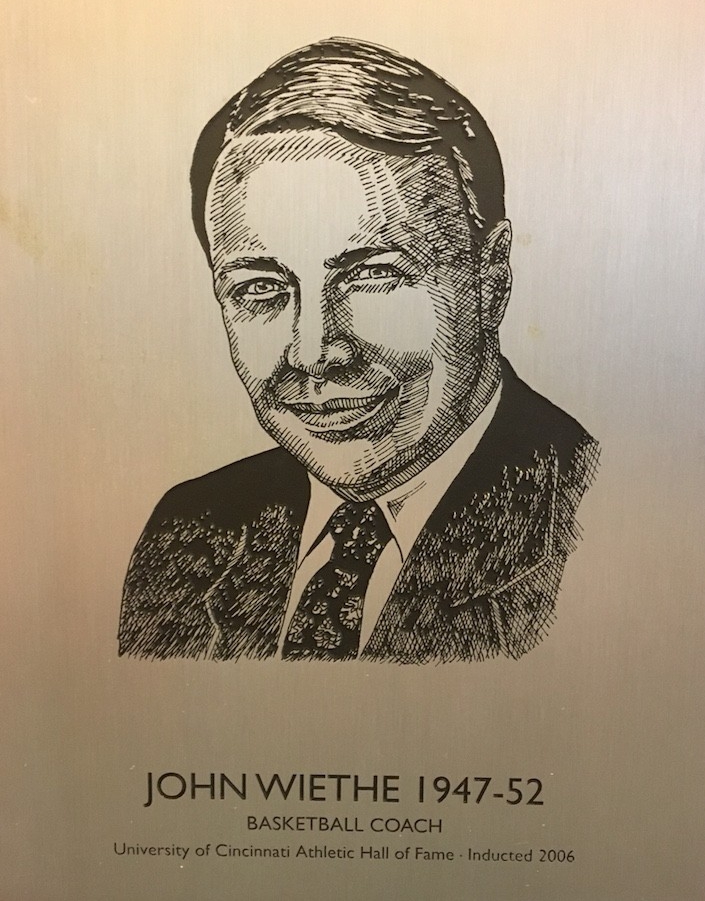 Jack Laub spent decades dreaming of uniting with the friends he made while playing at UC. At age 90, his plaque now takes a place next to them in the James P. Kelly Hall of Fame.

Laub was officially inducted on Nov. 3, 2016 — along with Chuck Machock, Josh Schneider and Madinah Slaise — but, admittedly, he has been longing for the honor for a very long time.

“My dad’s years at UC were a very special part of his life with wonderful memories that he cherishes,” says Laub’s daughter Deborah Lawrence, who attended the ceremony with her husband David. She said her father never stopped smiling his entire visit to UC. 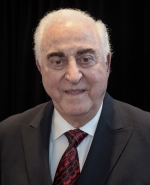 “The induction into the hall of fame was a great honor because it represents a chapter that shaped his character and influenced his life in very positive ways.”

Ultimately, he just wanted to be remembered alongside his friends.

“I think there was a period of about 15 years that I think I was obsessed with getting in somehow,” Laub says. “But to be inducted at 90 years old is an incredible feeling. It is one of the happiest days of my life.