UC professor of biological sciences Bruce Jayne explains how snakes can crawl in a straight line.

Snakes are known for their iconic S-shaped movements. But they have a less noticeable skill that gives them a unique superpower.

Snakes can crawl in a straight line.

University of Cincinnati biologist Bruce Jayne studied the mechanics of snake movement to understand exactly how they can propel themselves forward like a train through a tunnel.

“It’s a very good way to move in confined spaces,” Jayne said. “A lot of heavy-bodied snakes use this locomotion: vipers, boa constrictors, anacondas and pythons.”

His study titled “Crawling without Wiggling” was published in December in the Journal of Experimental Biology. 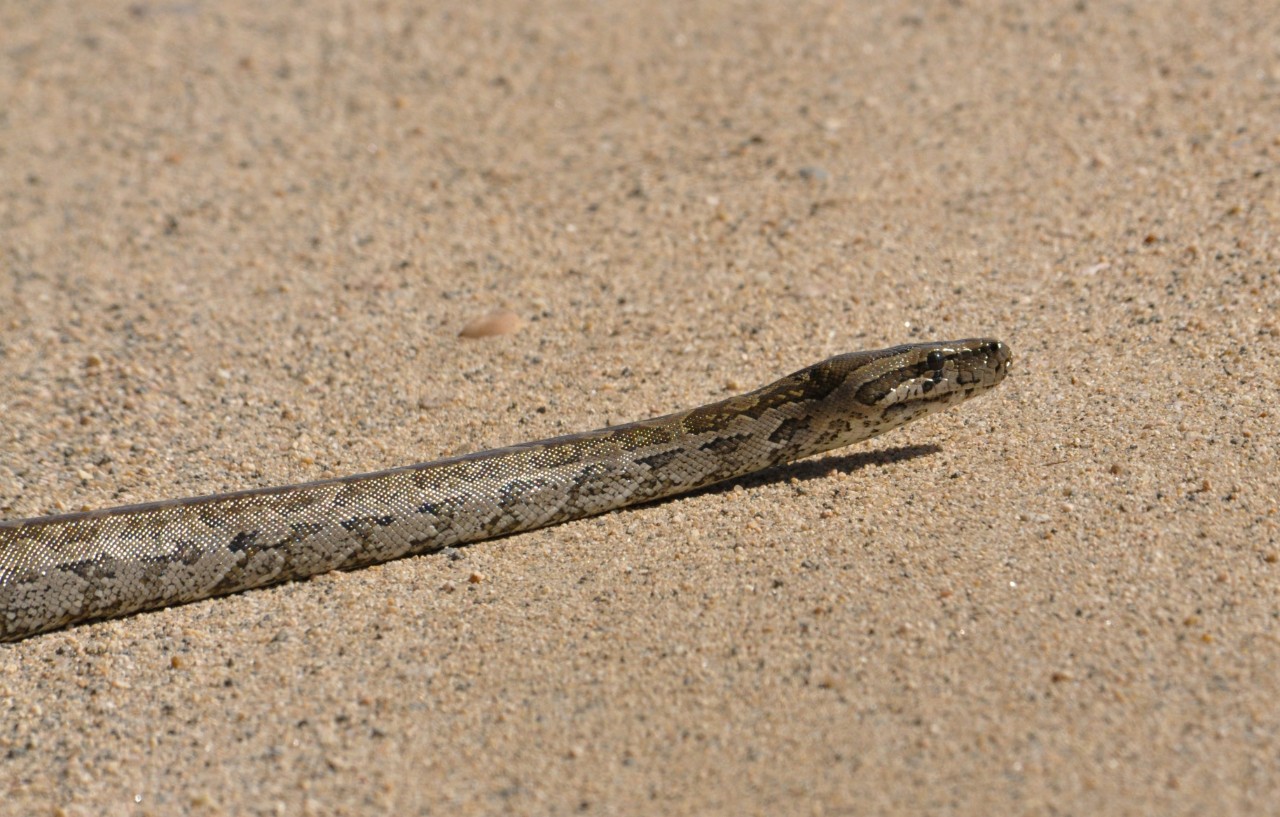 Large-bodied snakes like this African rock python use rectilinear locomotion to move in a straight line. UC biology professor Bruce Jayne used electromyography to examine the interaction of muscles and skin during this kind of snake movement. (Michael Miller)

Snakes typically swim, climb or crawl by bending their spine into serpentine coils or using the leading edges to push off objects. An extreme example of their diversity of movement gives the sidewinder rattlesnake its name.

Jayne, a professor of biological sciences in UC’s McMicken College of Arts & Sciences, already has unlocked the mechanics of three kinds of snake locomotion called concertina, serpentine and sidewinding. But the straightforward movement of snakes, called “rectilinear locomotion,” has gotten less attention, he said.

This coordination of muscle activity and skin movement was first examined in 1950 by biologist H.W. Lissmann. He hypothesized that the snake’s muscles combined with its loose, flexible and squishy belly skin enabled it to scoot forward without bending its spine.

“It’s been almost 70 years without that type of locomotion being well understood,” Jayne said.

Jayne and his graduate student and co-author, Steven Newman, tested Lissmann’s hypothesis using equipment unavailable to researchers in the 1950s. Jayne used high-definition digital cameras to film boa constrictors while recording the electrical impulses generated by particular muscles. This produced an electromyogram (similar to an EKG) that showed the coordination between the muscles, the snake’s skin and its body.

“This research could inform robotics. They could use snake-like robots for search-and-rescue in debris and collapsed buildings.” 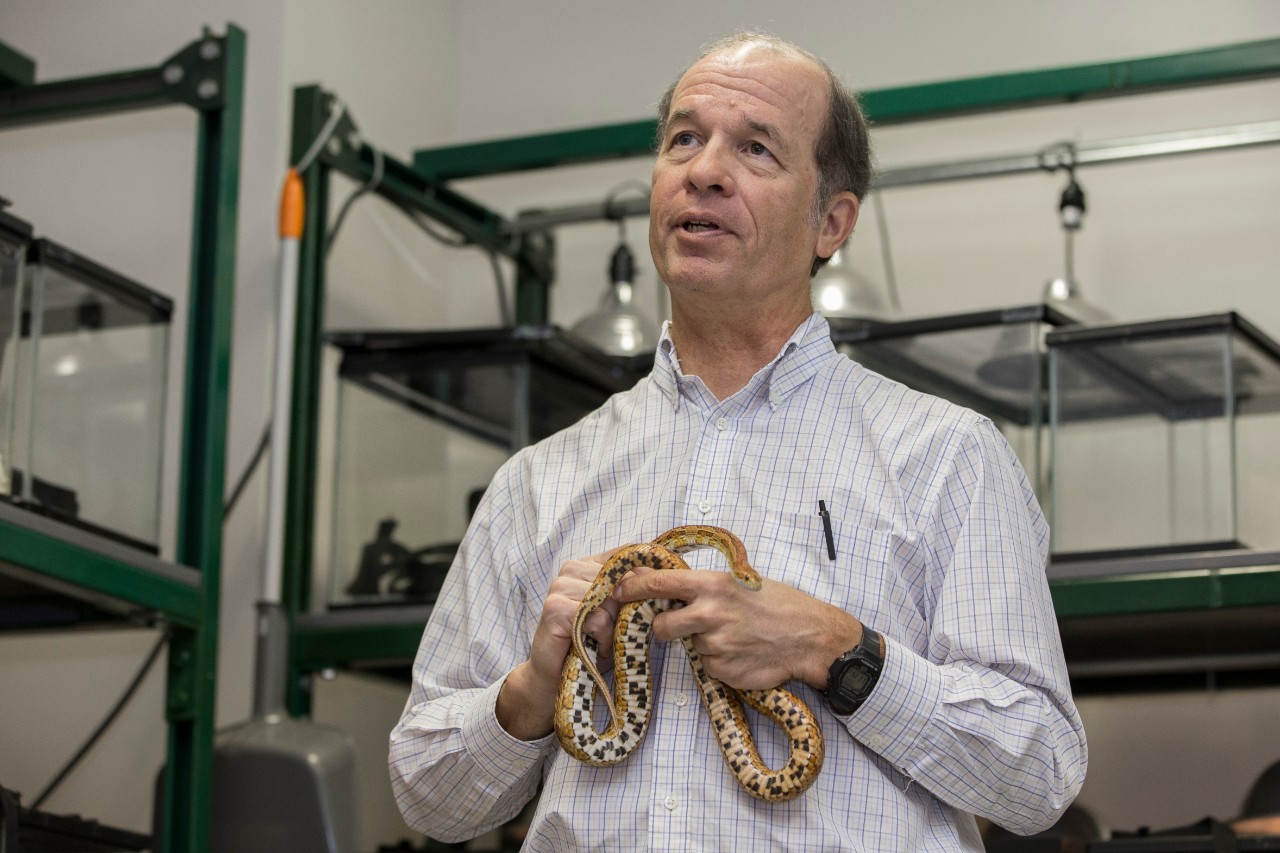 For the study, Newman and Jayne used boa constrictors, big-bodied snakes known for traveling in a straight line over the forest floor. They recorded high-definition video of the snakes moving across a horizontal surface hashed with reference marks. The researchers also added reference dots on the sides of the snakes to track the subtle movement of their scaly skin.

When the snake inches forward, the skin on its belly flexes far more than the skin over its ribcage and back. The belly scales act like treads on a tire, providing traction with the ground as the muscles pull the snake’s internal skeleture forward in an undulating pattern that becomes fluid and seamless when they move quickly.

The snake’s muscles are sequentially activated from the head toward the tail in a remarkably fluid and seamless way. Two of the key muscles responsible for this extend from the ribs (costo) to the skin (cutaneous) giving them their name costocutaneous.

The advantage of this kind of motion is obvious for a predator that eats rodents and other animals that spend time underground.

“Snakes evolved from burrowing ancestors. You can fit in much narrower holes or tunnels by moving this way than if you had to bend your body and push against something,” Newman said.

The study was supported in part by a grant from the National Science Foundation.

“They move in so many fascinating ways. Is that because they have such an incredible diversity of motor patterns that the nervous system can generate?” 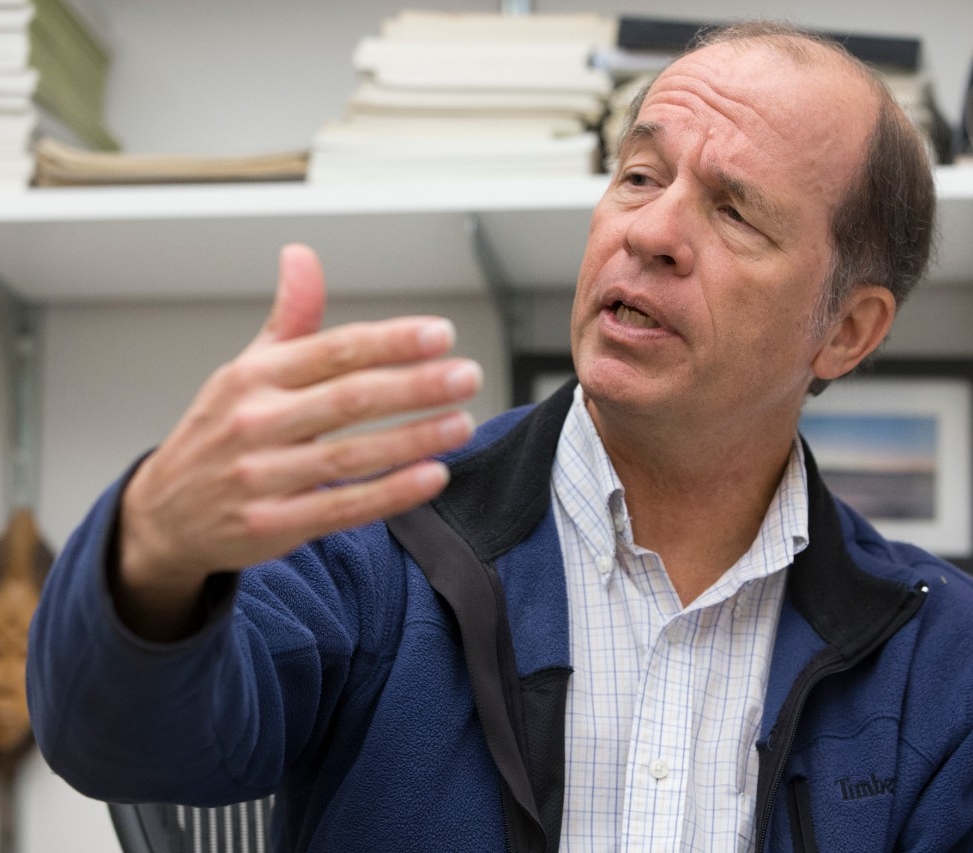 “But he hypothesized that the muscle that shortens the skin was the mechanism that propels a snake forward. He got that wrong,” Jayne said. “But given the time he conducted the study, I marvel at how he was able to do it. I have tremendous admiration for his insights.”

Industry has tried to mimic the limbless, serpentine movements of snakes in robots that can inspect pipelines and other underwater equipment. Newman said robots that can harness a snake’s rectilinear motion could have profound applications.

“This research could inform robotics. It would be a big advantage to be able to move in straight lines in small, confined spaces. They could use snake-like robots for search-and-rescue in debris and collapsed buildings,” Newman said.

Rectilinear locomotion is low gear for snakes that otherwise can summon surprising speed. They only use it when they are relaxed. The researchers observed that snakes reverted to traditional concertina and serpentine motions when they were startled or prodded to move.

An avid cyclist, Jayne has studied the physiology and biomechanics of cycling in a lab in Rieveschl. He has ongoing studies of riders’ cardiovascular fitness. He measures their oxygen consumption in one minute per kilogram of body weight to learn more about how cyclists can increase their muscles’ ability to burn lactase.

But he has always been most fascinated by snakes. His work has been published in more than 70 journal articles, most of them examining some aspect of snake behavior or biology. Most recently, Jayne has studied snake locomotion, particularly the amazing ability of some to climb trees. 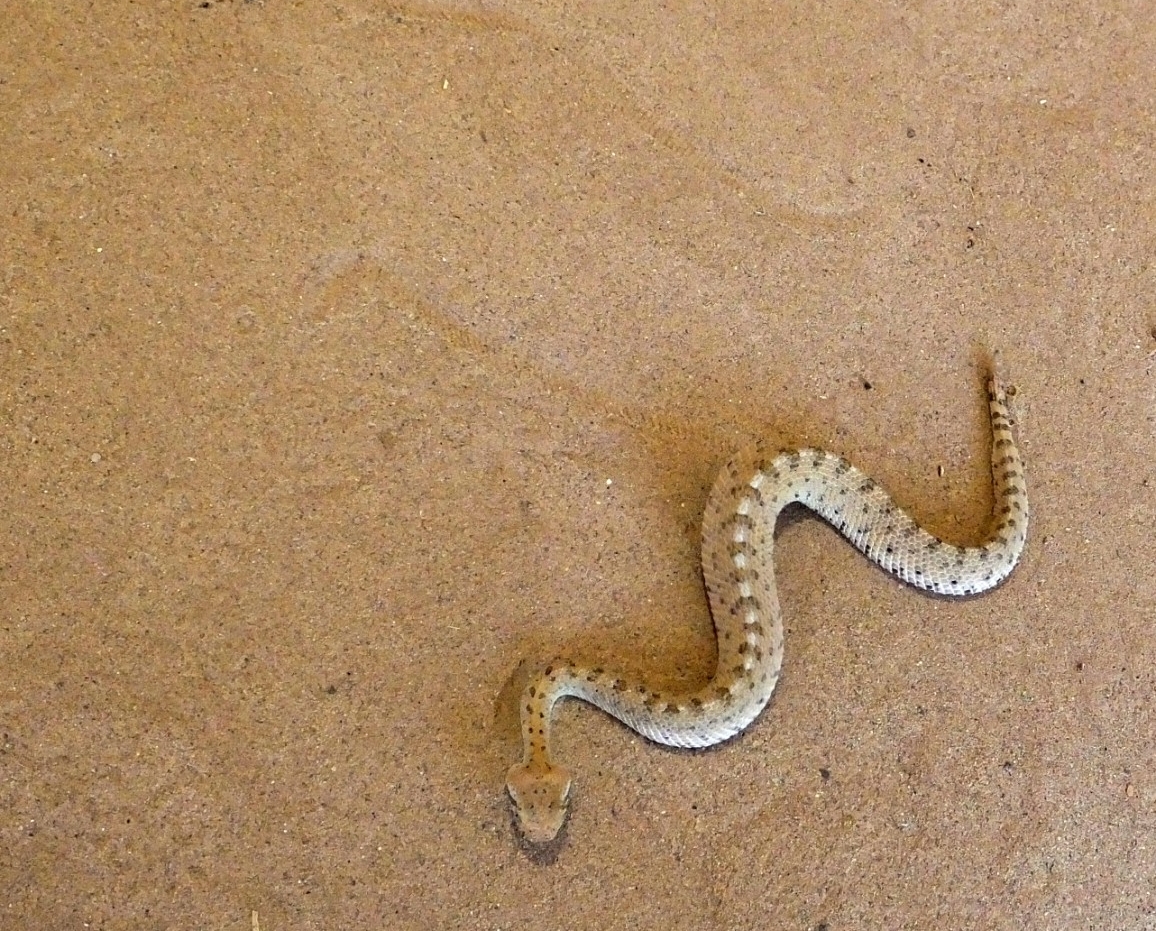 Jayne’s snake lab in UC’s Rieveschl Hall is home to a menagerie of species from around the world, from a jumbo Burmese python that is crowd-pleaser at the professor’s public talks to incredibly skinny vine snakes with camouflage so perfect they can disappear even in their glass exhibits. He keeps the lab a toasty 80 degrees in winter.

He pulled a small python from its terrarium and cradled the animal with the casual expertise that comes from years of practice. He has been catching and studying snakes since he was a child growing up in Chicago.

“This is a baby reticulated python,” he said. “A lot of hobbyists get very wound up about partial albinos, but I like this natural color. Their cryptic coloration really breaks up their outline.”

While most biology labs study many individuals of the same species, Jayne keeps a variety of snakes for his locomotion and vision studies: carpet pythons and corn snakes and boa constrictors and even an Asian flying snake that can glide from tree to tree.

“Their belly isn’t just flat; it’s concave. They make an S-shape in mid-air and it acts as an airfoil so they can get lift,” he said. “They contort their body to steer to a particular branch.” 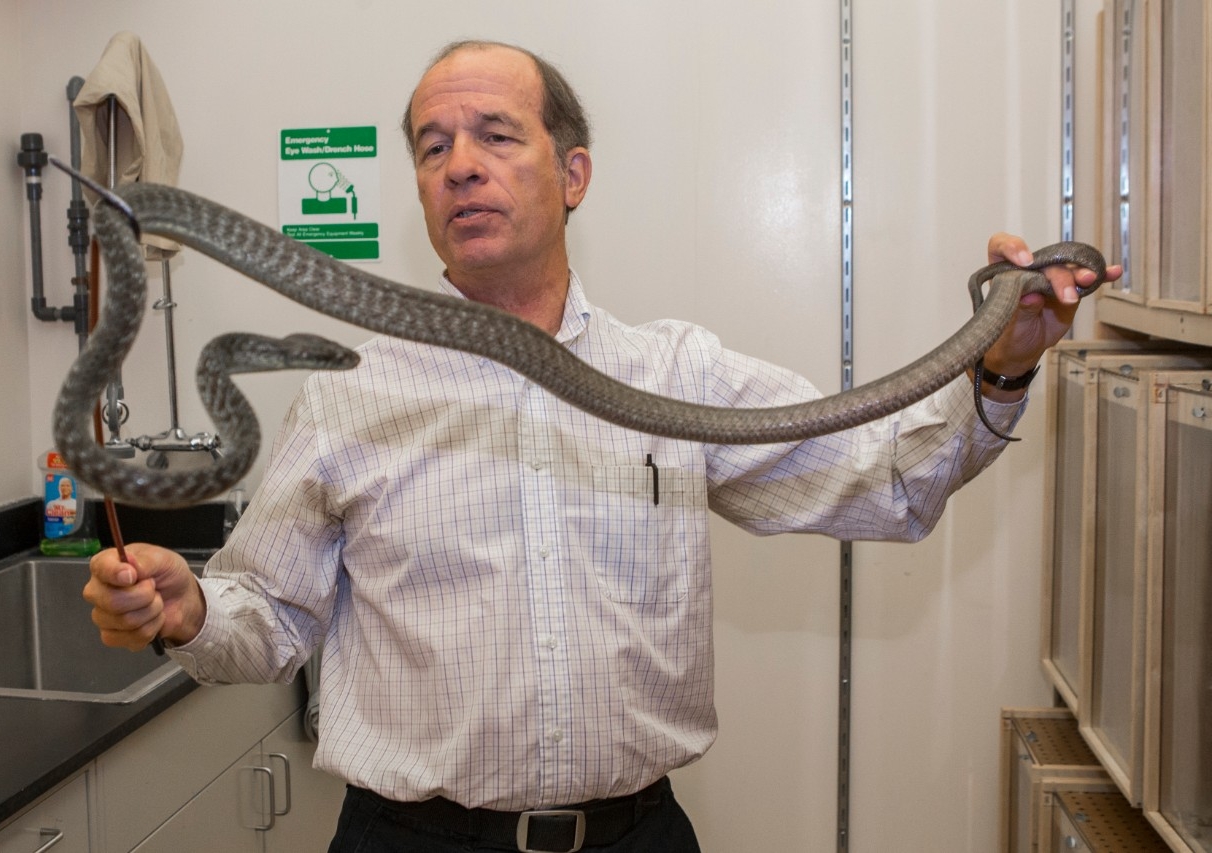 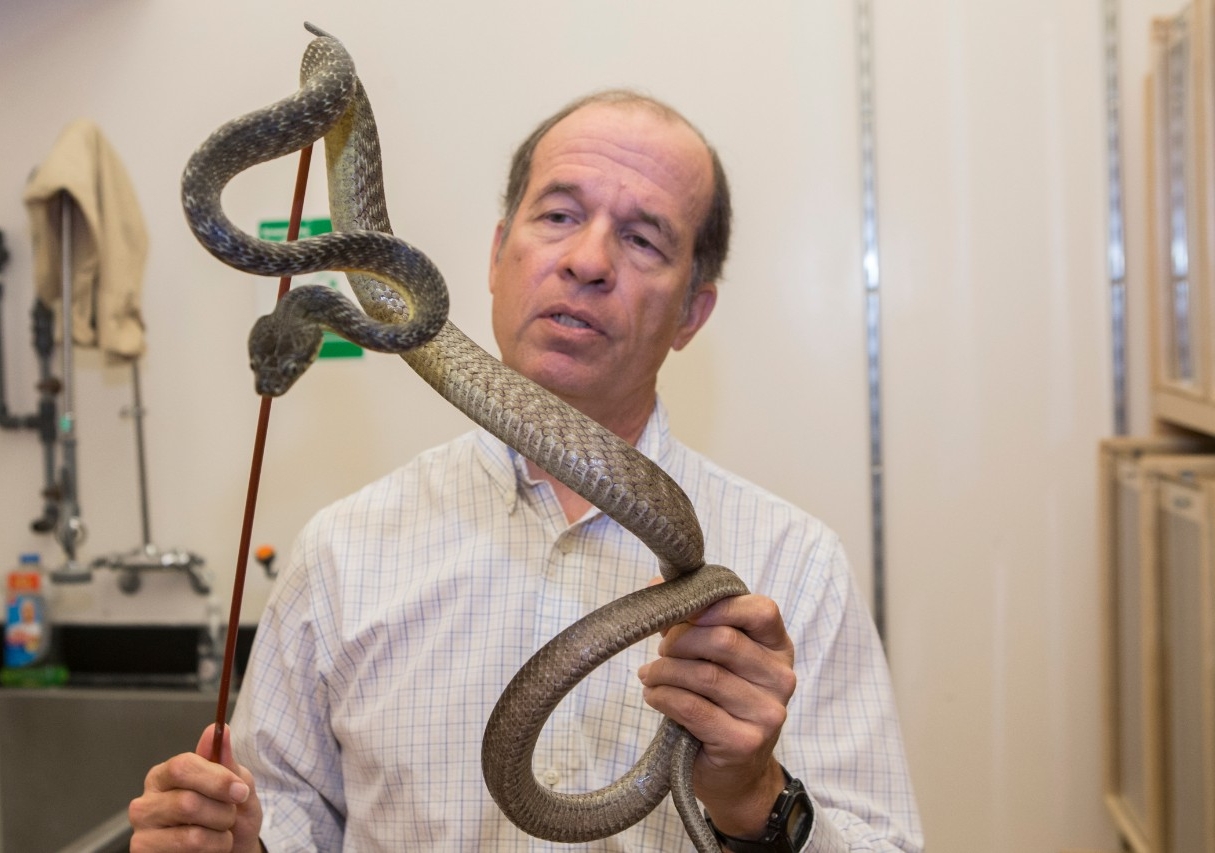 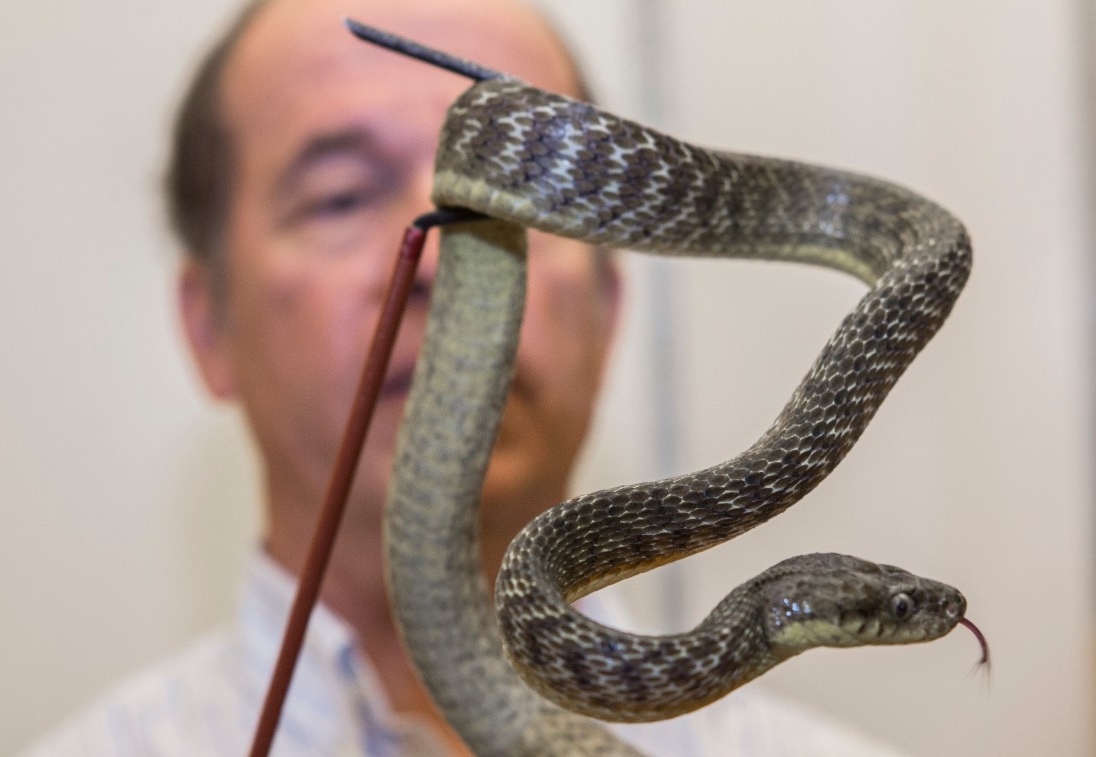 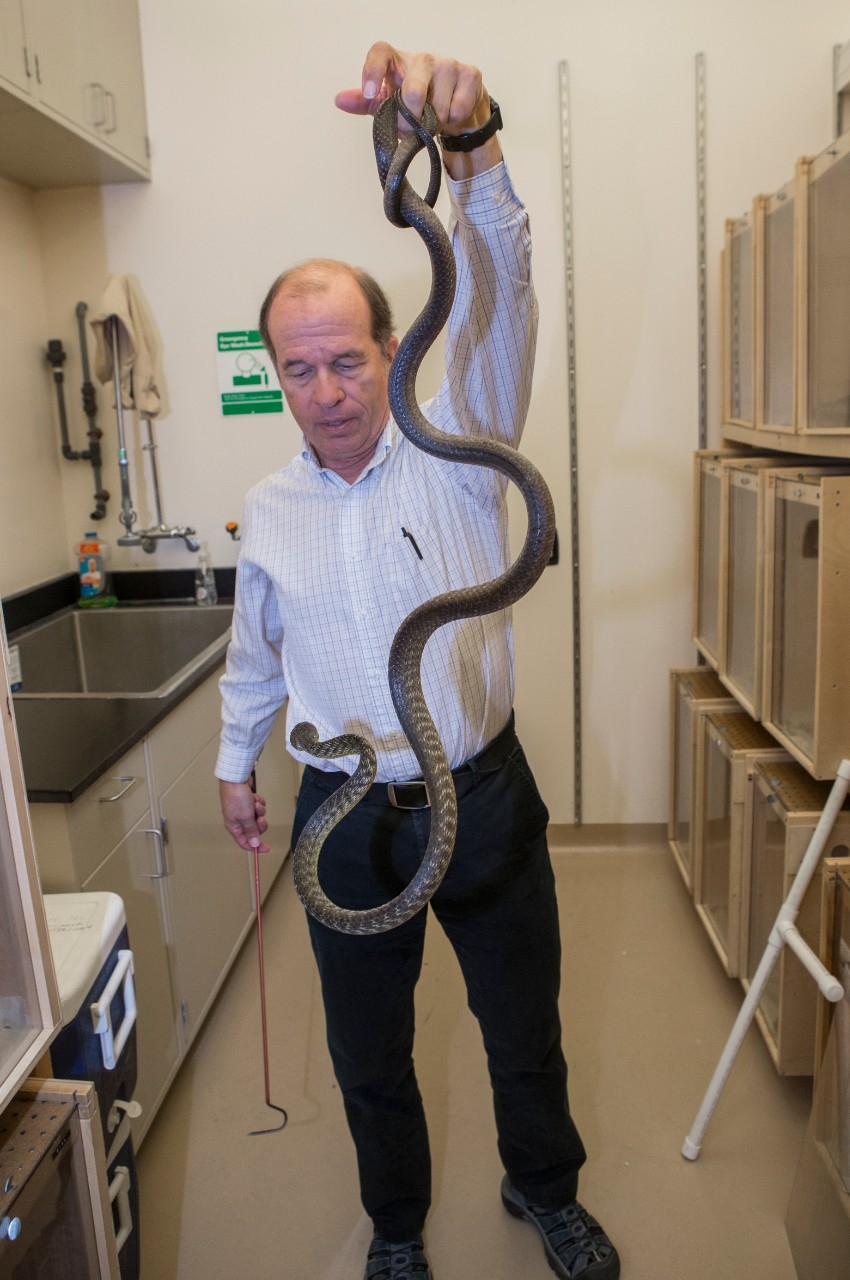 UC biology professor Bruce Jayne holds a mildly venomous brown tree snake in his lab. These climbing snakes are notorious for decimating wild bird populations in Guam. Understanding how they climb is key to helping wildlife managers come up with better barriers to protect vulnerable species.

His lab has several brown tree snakes, a notoriously invasive species not commonly found in American herpetology collections. Brown tree snakes have decimated wild bird populations in places like the American territory of Guam, where they are believed to have stowed away on planes or cargo ships after World War II. Wildlife officials worldwide are taking extreme steps to prevent the tree snakes from invading new territory as stowaways.

“They trap them in Guam. But their numbers are so staggering that it’s just a finger in the dam,” Jayne said. “The biggest priority is to make sure they don’t get introduced anywhere else. One of the more promising preventive measures is to train dogs to sniff them out in cargo areas.”

Jayne used a snake hook to remove a 5-foot-long brown tree snake from its glass enclosure. The rear-fanged snakes are mildly venomous but pose little threat to people. The snake, which is actually olive-colored, was solid, strong and shockingly big for an arboreal animal. Jayne’s locomotion studies have found that tree snakes can reach branches as far as 90 percent the length of their bodies. And they can climb virtually anything.

“There’s a key muscle that supports the back of snakes like boa constrictors that typically spans about 14 vertebrae. But in the brown tree snake, that same muscle spans 30 vertebrae,” Jayne said. “That is advantageous for supporting their weight while crossing gaps.”

He let the snake dangle from one hand and watched as its prehensile tail wrapped around his wrist. Undeterred, the snake began to explore its vertical world, extending its body parallel to the ground to try to reach countertops.

It was easy to see how a snake so nimble and big could wreak havoc on an ecosystem that evolved without natural defenses to climbing snakes. Wildlife officials have a keen interest in understanding their abilities, Jayne said.

Jayne’s lifelong interest in snakes has given science keen insights into many previously undocumented behaviors. He studied crab-eating snakes in Malaysia and is testing the acuity of snake vision in his own makeshift optical lab at UC.

“Brown tree snakes are really good at stretching out. But the funny thing is the boas and pythons are pretty darned good, too, because they’re so muscular. They use brute force while the other snakes finesse it,” Jayne said. “There are statistically significant differences in the movement of these species, but it’s a lot less than I expected.” 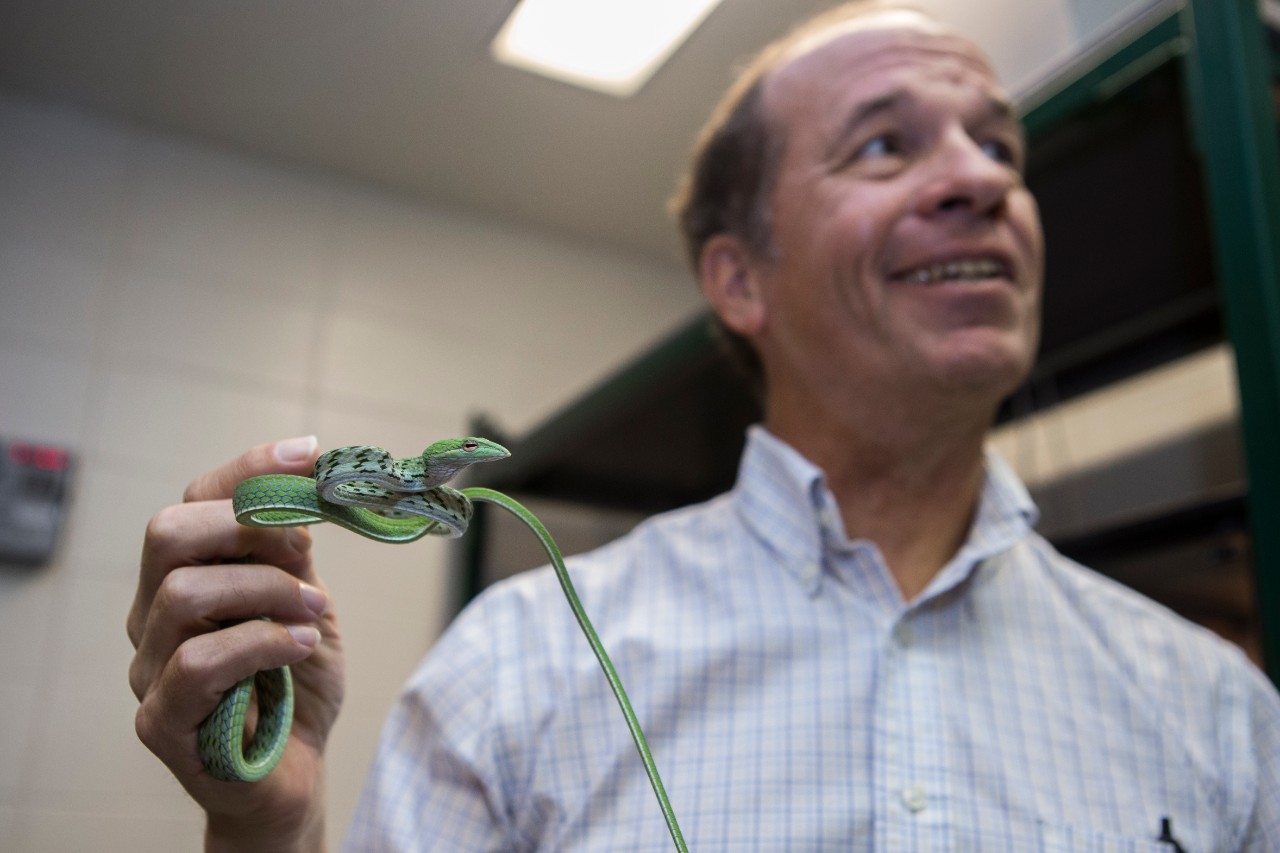 A vine snake has cryptic camouflage and bizarre eyes that give it peripheral and binocular vision.

Jayne expertly removed a green vine snake from its enclosure. These snakes from southeast Asia have beautiful green, black and white scales in an interlocking pattern like a climbing rope and alien-looking infinity-symbol-shaped eyes that provide excellent binocular and peripheral vision.

“They’re a bit nippy. I don’t want him to give me a little kiss,” Jayne said.

“Unlike vipers that bite their prey and release it, these snakes bite and hold on,” he said. “They have really subdued but cryptic coloring. Believe me, in natural vegetation they’re hard to spot. I really love them.”

By testing the limits of its mobility, Jayne can learn more about the snake’s complex motor controls. This can shed light on how humans can execute coordinated movements.

“What allows them to go in all these different directions and deal with all of that three-dimensional complexity is they have a diversity or plasticity of neural control of the muscles,” Jayne said. “Even if the animal had the physical strength to do something, it wouldn’t necessarily have the neural control.”

Jayne wants to learn more about how this refined motor control contributes to a snake’s amazing contortions.

“They move in so many fascinating ways. Is that because they have such an incredible diversity of motor patterns that the nervous system can generate?” he said. 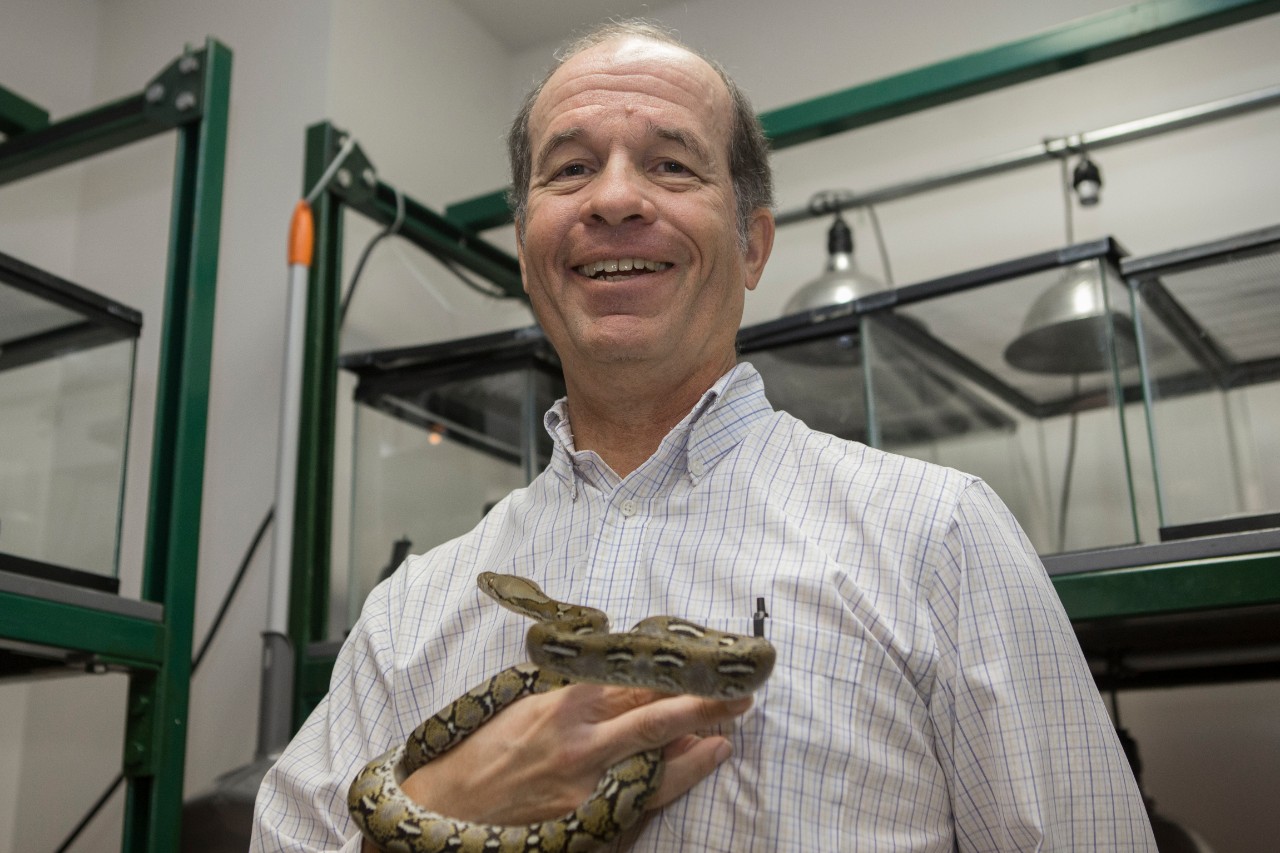 UC professor Bruce Jayne holds a baby reticulated python in his snake lab, where he is studying snake vision.