Lord of the rings

A University of Cincinnati team's rare discovery of four gold rings in the tomb of a wealthy Bronze Age warrior undisturbed for 3,500 years prompts a new consideration of Greek history. 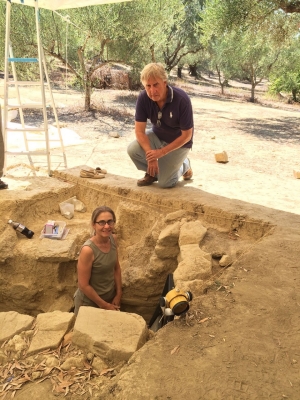 UC's Shari Stocker, left, and Jack Davis, right, have worked in the Pylos region of Greece for 25 years. Stocker stands in the tomb of a Greek warrior uncovered by the UC-based team.

When University of Cincinnati researchers uncovered the tomb of a Bronze Age warrior — left untouched for more than 3,500 years and packed with a spectacular array of precious jewelry, weapons and riches — the discovery was hailed by experts as “the find of a lifetime.”

Now, only a year after archaeologists completed the excavation, new understandings of the artifacts — particularly the discovery of four golden rings — and the insights they provide to the origins of Greek civilization may prove to be the team's next big discovery.

The husband-and-wife team's highly anticipated lecture is generating worldwide attention, including a feature in the New York Times. 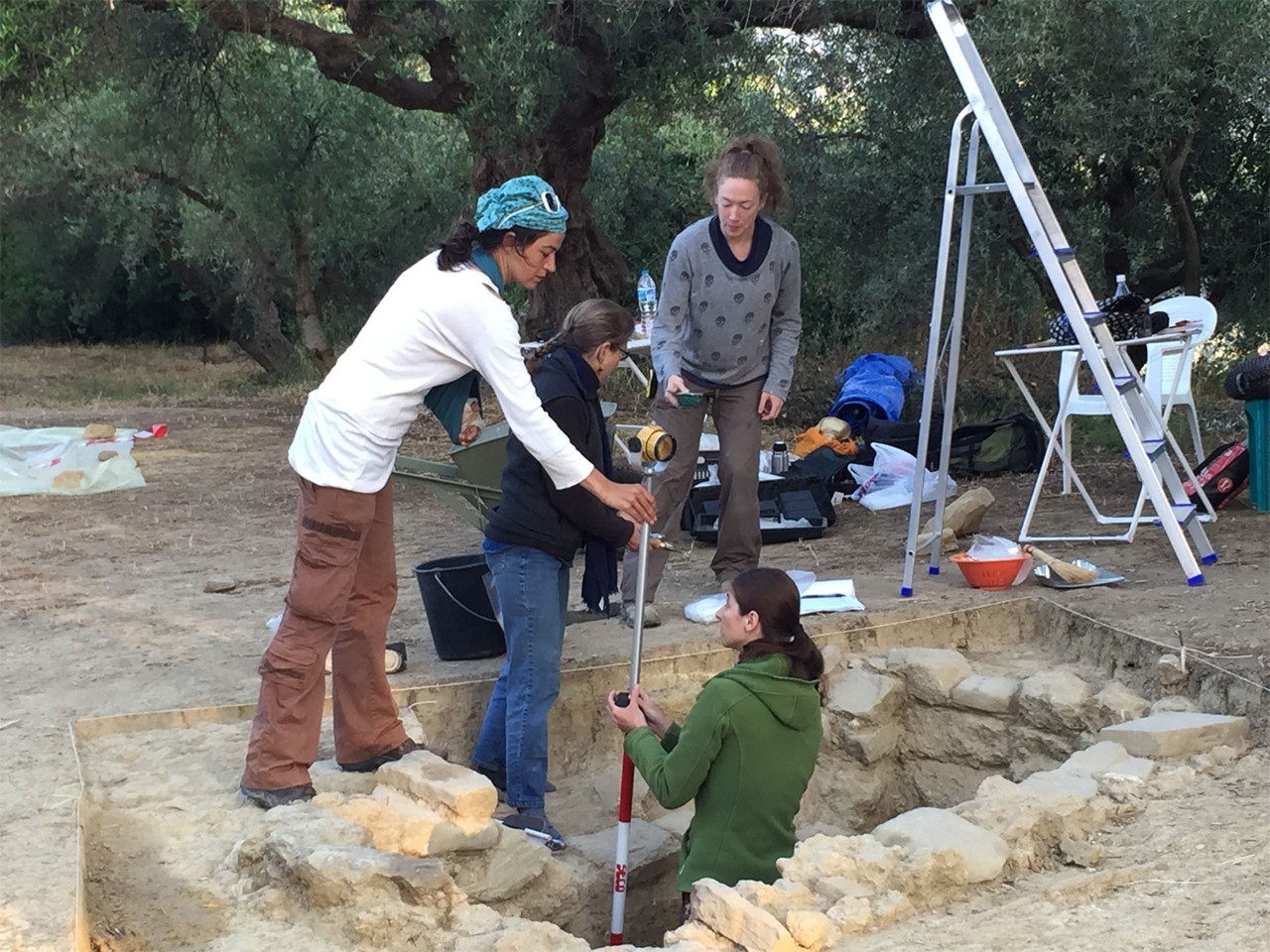 The UC-based team excavates the tomb of a Greek warrior discovered in southwest Greece.

The 'find of a lifetime'

Stocker and Davis, along with other UC staff specialists and students, stumbled upon the remarkably undisturbed and intact tomb last May while excavating near the city of Pylos, an ancient city on the southwest coast of Greece.

Inside they discovered the well-preserved remains of what is believed to have been a powerful Mycenaean warrior or priest in his early- to mid-30s who was buried around 1500 B.C. near the archeological excavation of the Palace of Nestor.

Immortalized in Homer's "Odyssey," the large administrative center was destroyed by fire sometime around 1180 B.C., but remains the best-preserved Bronze Age palace on the Greek mainland. UC archaeologist Carl Blegen first discovered the Mycenaean ruins in 1939, where he unearthed a number of clay tablets written in Linear B script, the earliest known written form of Greek.

The warrior's tomb, hailed by the Greek Culture Ministry as the "most important to have been discovered [in continental Greece] in 65 years," revealed more than 2,000 objects arrayed on and around the body, including four solid gold rings, silver cups, precious stone beads, fine-toothed ivory combs and an intricately built sword, among other weapons.

The skeleton was dubbed the "Griffin Warrior" for the discovery of an ivory plaque adorned with a griffin — a mythical beast with the body of a lion and the head and wings of an eagle — buried with him.

The UC excavation is remarkable not just for the unparalleled riches discovered in the warrior-priest's tomb — to find an unlooted, intact grave is, in itself, a rare and historic feat — but for what the grave and its bounty reveals about the dawn of the Mycenaean civilization, a transformative period in the Bronze Age. 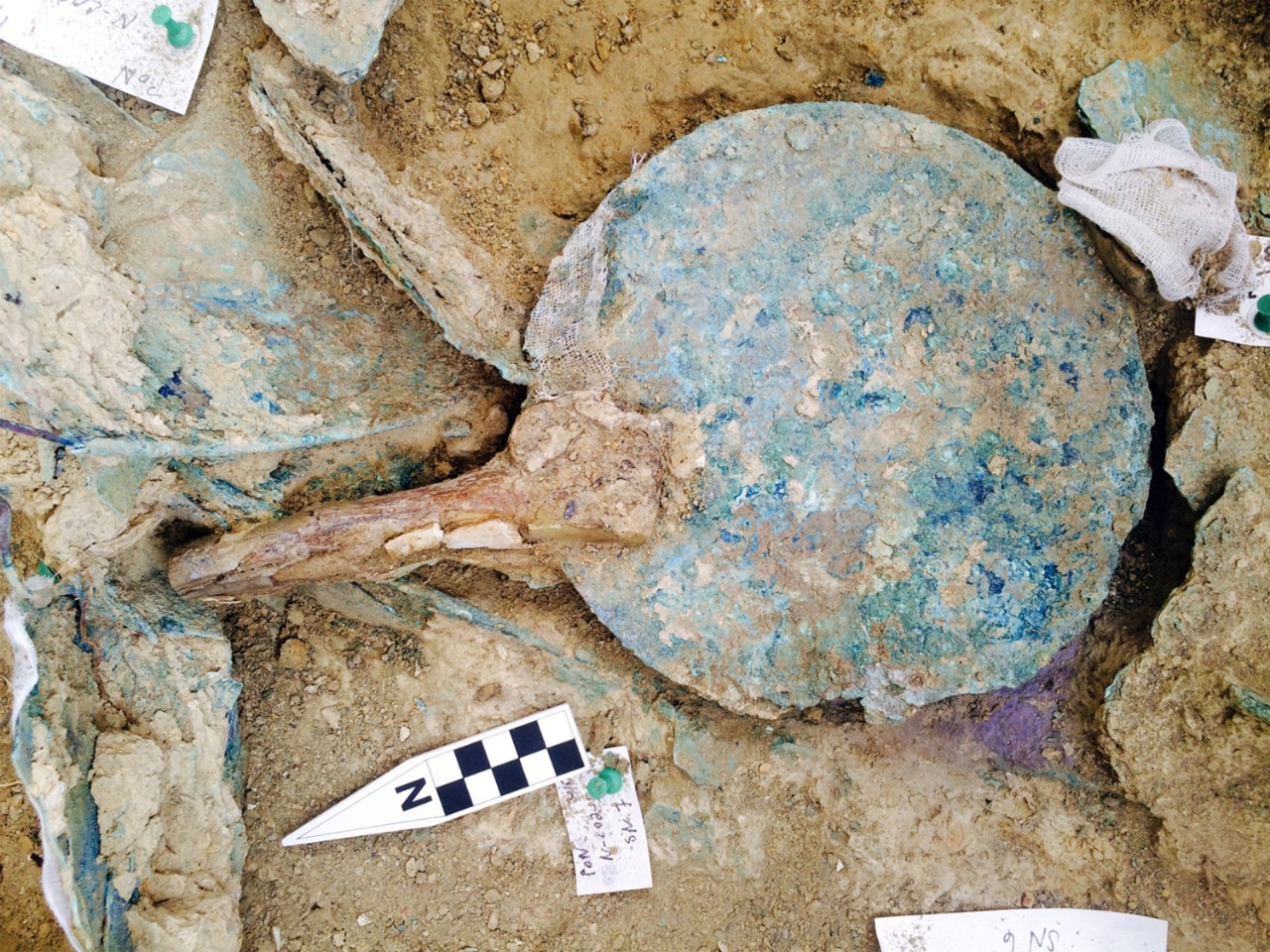 A mirror discovered in the tomb of a Greek warrior in southwest Greece refers to a scene of a goddess holding a mirror in one of four gold rings unearthed in the excavation by a team of UC researchers.

A significant number of the artifacts found in the warrior's grave were made by Minoans, a culturally dominant civilization to the Mycenaeans that arose on the large island of Crete, southeast of Pylos.  How then, the researchers puzzled, did a man from the Greek mainland accumulate such a large cache of Minoan-made riches?

One longstanding theory is that the Greeks of the Griffin Warrior's era — dubbed Mycenaean after their principal city, Mycenae — are thought to have imported or robbed the riches from the affluent non-Greek Minoan civilization on Crete.

"The grave was right around the time the Mycenaeans were conquering the Minoans," explained Stocker. "We know that there were extensive raids and shortly after the date of our grave, Minoan-Crete fell to the Mycenaeans."

But Stocker and Davis say that the artifacts found in the warrior's grave suggest a far greater cultural sharing between the ancient civilizations than just mere plunder.  Instead, they insist, the carefully selected and hand-placed items reveal much about the heart of the relationship of the burgeoning mainland Greek culture to the more refined culture of Crete. 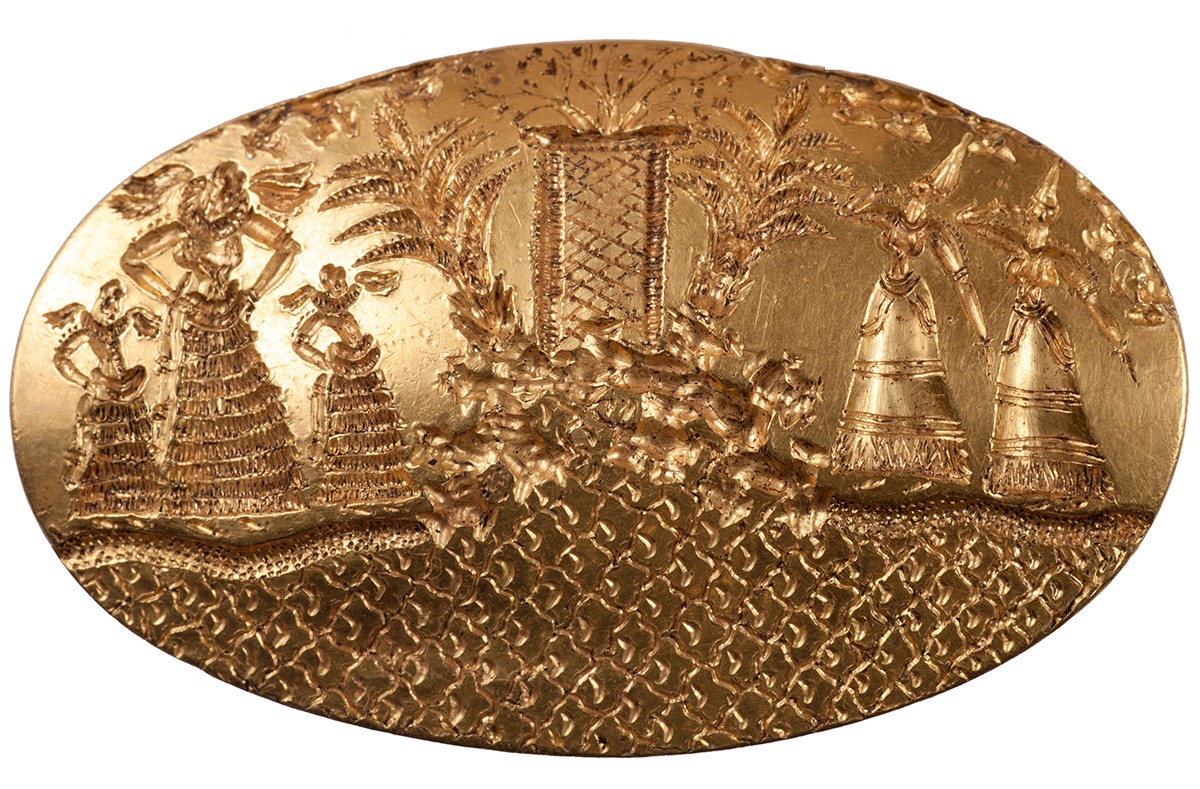 The excavation yielded the discovery of the second largest gold signet ring known in the Aegean world, which shows five elaborately dressed female figures gathered by a seaside shrine.

The discovery of four gold signet rings bearing highly detailed Minoan iconography offers one of the best examples of this Mycenaean-Minoan cultural transfer and paints a more vivid picture of early Greek society, the researchers say.

The rings — three of which the researchers are unveiling for the first time on Oct. 6 — are crafted from multiple sheets of gold and feature iconographical references seen elsewhere in Minoan art and religious culture.

Cultural meanings aside, the rings themselves are a remarkable find simply for the elaborate attention to detail and artisan workmanship, say Stocker and Davis.

"They’re carving these before the microscope and electric tools," marveled Stocker.  "This is exquisite workmanship for something so tiny and old and really shows the skill of Minoan craftsmen."

"It shows a level of superb craftsmanship that just isn’t found on these other rings," said Davis, referring to the rings of Minos and Nestor, long the subjects of intense scrutiny by experts who question their authenticities, in part, due to the high level of detail on them.

But the discovery of the Minoan-style rings in a Mycenaean warrior's grave further left the research team scratching their heads: Did the Mycenaeans understand what they were taking from the Minoans and the concepts behind the iconography?

After a year of careful examination of the grave’s artifacts, Davis and Stocker now say yes.

"People have suggested that the findings in the grave are treasure, like Blackbeard's treasure, that was just buried along with the dead as impressive contraband," said Davis. "We think that already in this period the people on the mainland already understood much of the religious iconography on these rings, and they were already buying into religious concepts on the island of Crete."

"This isn't just loot," he added. "It may be loot, but they're specifically selecting loot that transmits messages that are understandable to them."

"They’re not just going there and robbing a jewelry store," echoed Stocker. "They're thinking about it and selecting specific items for inclusion in the burial."

The researchers point to other items in the grave that reference religious and cultural motifs seen both in the rings and Minoan imagery.

One of six ivory combs found within the warrior's tomb.

A snapshot captured in time

These associations and more, which the researchers plan to further explore in upcoming publications, promise to open new doors into the understanding of the nascent Mycenaean belief system at a transitional time when Minoan works first began to gain importance on the Greek mainland, Davis and Stocker say.

"What this allows us to do gets us beyond just thinking in terms of mere borrowing of prestige items or items to show off for display," explained Davis.  "This starts to get us into an understanding of actual beliefs and ideas and an ideology that existed in this time of the formation of the Mycenaean civilization, which is very difficult to get at."

That difficulty is often compounded by the Mycenaeans' practice of group burials for elite members of society.  While other grave excavations in Mycenae have yielded even more remarkable riches, the presence of multiple corpses in those graves makes it difficult to determine what items were buried with each individual and why.

The Griffin Warrior's tomb contains just one skeleton, which researchers say allows them to form a better picture of who he was, why these specific items were selected to accompany him on his journey to the underworld and what those discoveries reveal about the dawn of European civilization.

"We have a snapshot here, captured in time, with the objects as they were placed around this guy," said Davis.  "We can look at this not from an outside perspective, but from an insider's perspective and imagine why and how they chose to place them in the grave."