Carbon is the new black

UC’s Nanoworld Laboratories collaborates with the U.S. Air Force, the U.S. Army and NASA to investigate new uses for carbon nanotubes in military uniforms and fabric that can double as batteries.

Engineers with the University of Cincinnati are leveraging a partnership with Wright-Patterson Air Force Base to create clothing that can charge your cell phone.

What makes this possible are the unique properties of carbon nanotubes: a large surface area that is strong, conductive and heat-resistant.

UC’s College of Engineering and Applied Science has a five-year agreement with the Air Force Research Laboratory to conduct research that can enhance military technology applications.

“The major challenge is translating these beautiful properties to take advantage of their strength, conductivity and heat resistance,” Shanov said. 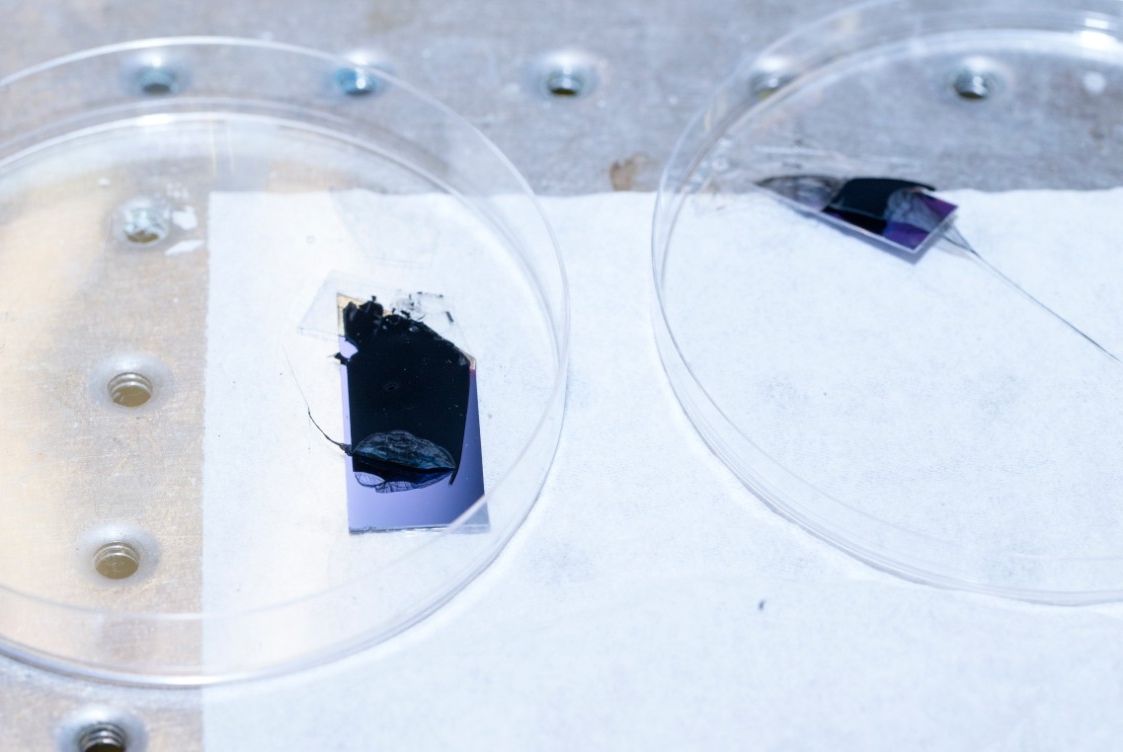 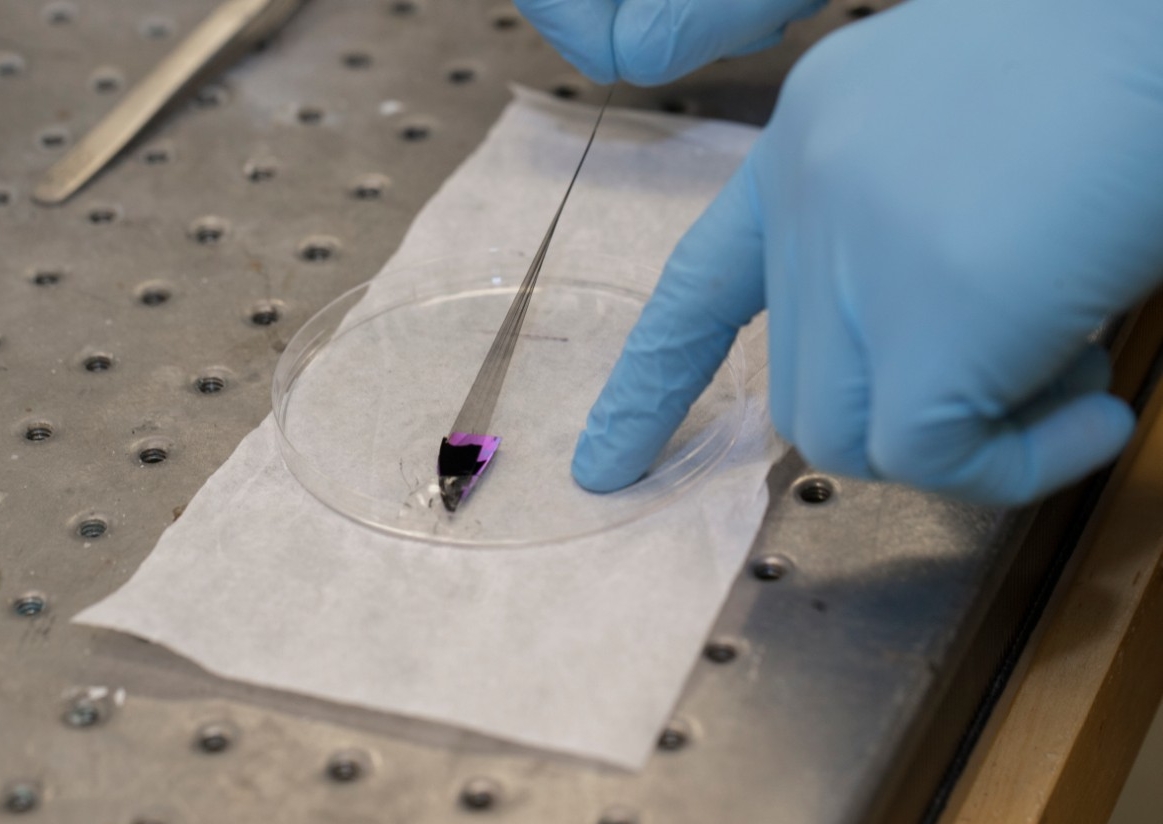 The carbon fibers can be spooled into strong, conductive thread. 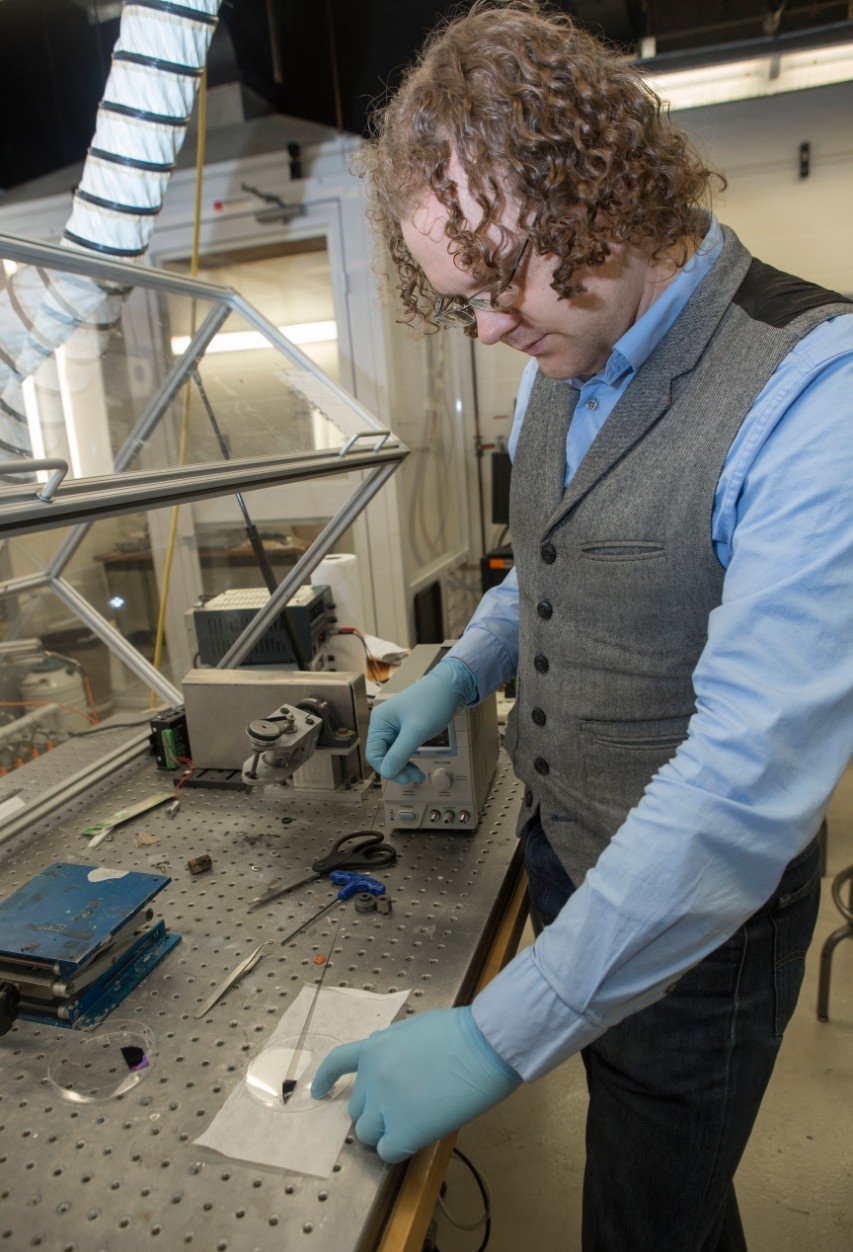 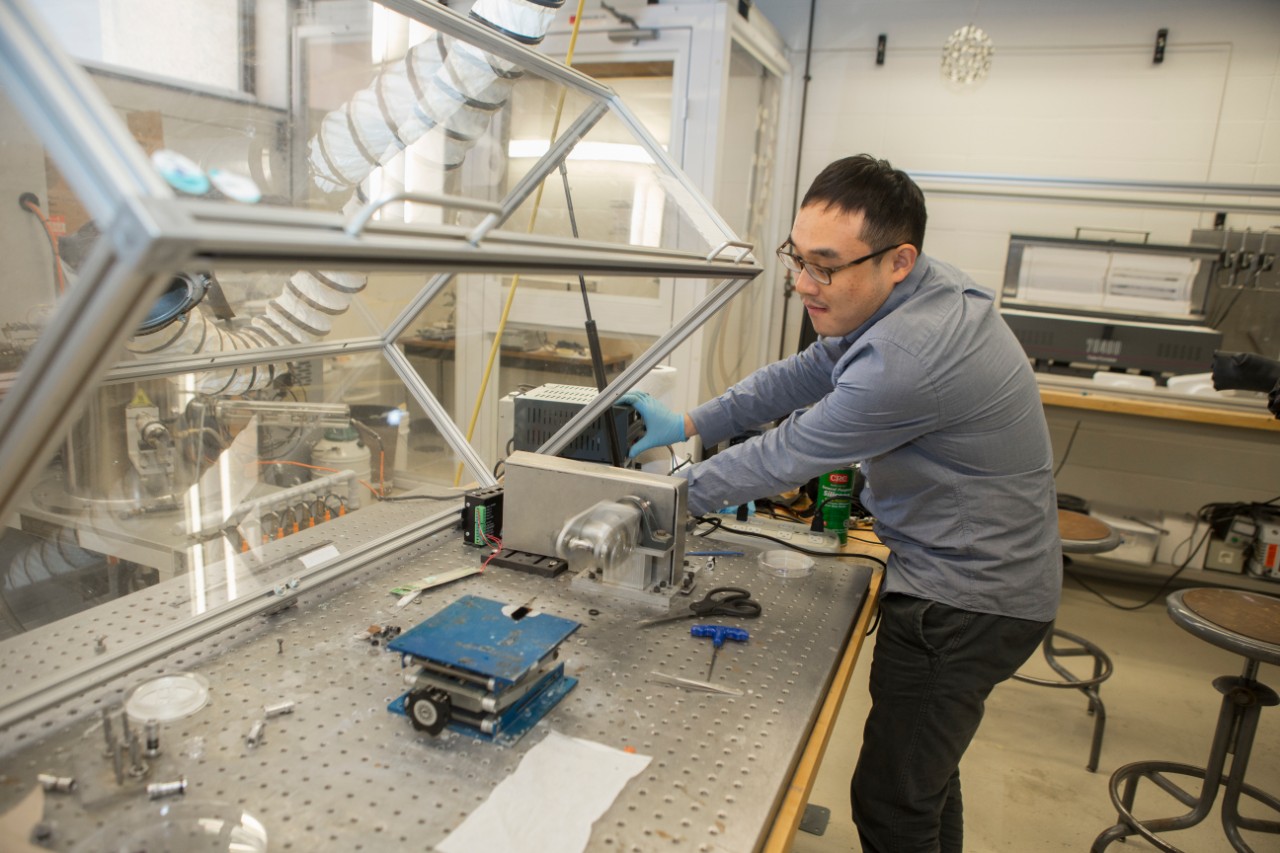 Schulz said manufacturing is at the cusp of a carbon renaissance. Carbon nanotubes will replace copper wire in cars and planes to reduce weight and improve fuel efficiency. Carbon will filter our water and tell us more about our lives and bodies through new biometric sensors.

Carbon will replace polyester and other synthetic fibers. And since carbon nanotubes are the blackest objects found on Earth, absorbing 99.9 percent of all visible light, you might say carbon is the new black.

“In the past, metals dominated manufacturing goods,” Schulz said. “But I think carbon is going to replace metals in a lot of applications.

“There’s going to be a new carbon era – a carbon revolution,” Schulz said.

“The only thing holding us back is cracking the code on making carbon nanotubes at scale.” 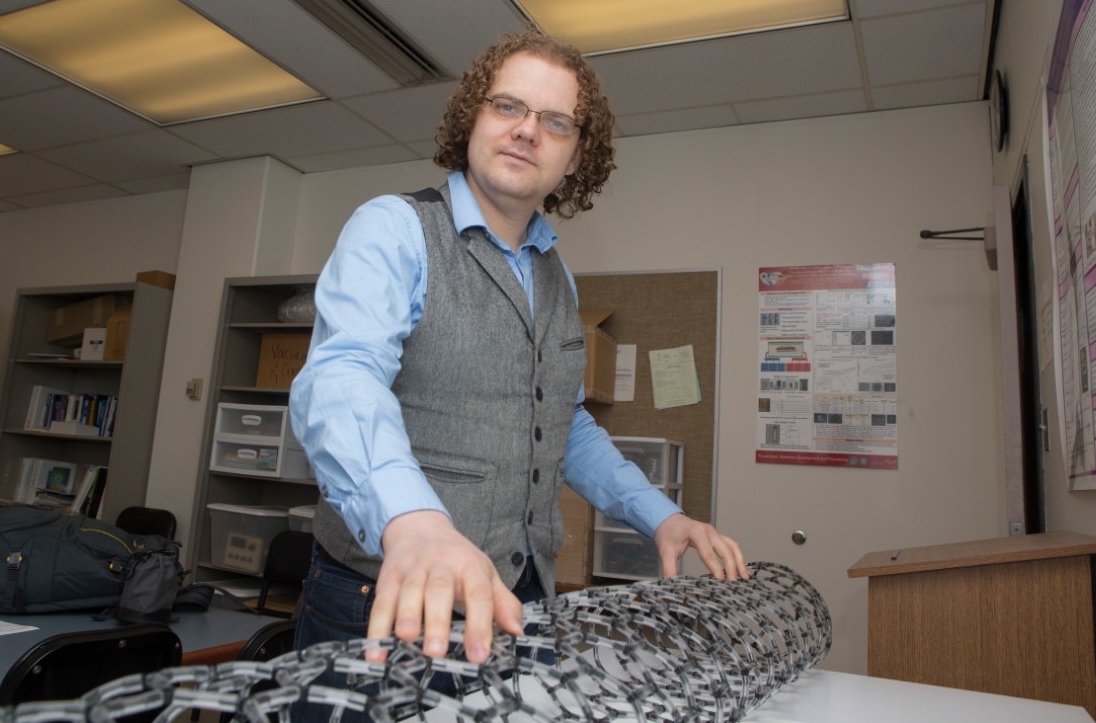 One of them, UC research associate Sathya Narayan Kanakaraj, co-authored a study examining ways to improve the tensile strength of dry-spun carbon nanotube fiber. His results were published in June in the journal Materials Research Success.

Graduate student Mark Haase, spent the past year exploring applications for carbon nanotubes at the Air Force Research Lab of Wright-Patterson. Through the partnership, UC students use the Air Force Lab’s sophisticated equipment, including X-ray computer tomography, to analyze samples. Haase has been using the Air Force equipment to help his classmates with their projects as well.

“This pushes us to work in groups and to specialize. These are the same dynamics we see in corporate research and industry,” Haase said. “Engineering is a group activity these days so we can take advantage of that.”

“We have the luxury in academia to explore different applications. Not all of them may see the market. But even if 10 percent hit, it would be a great success.” 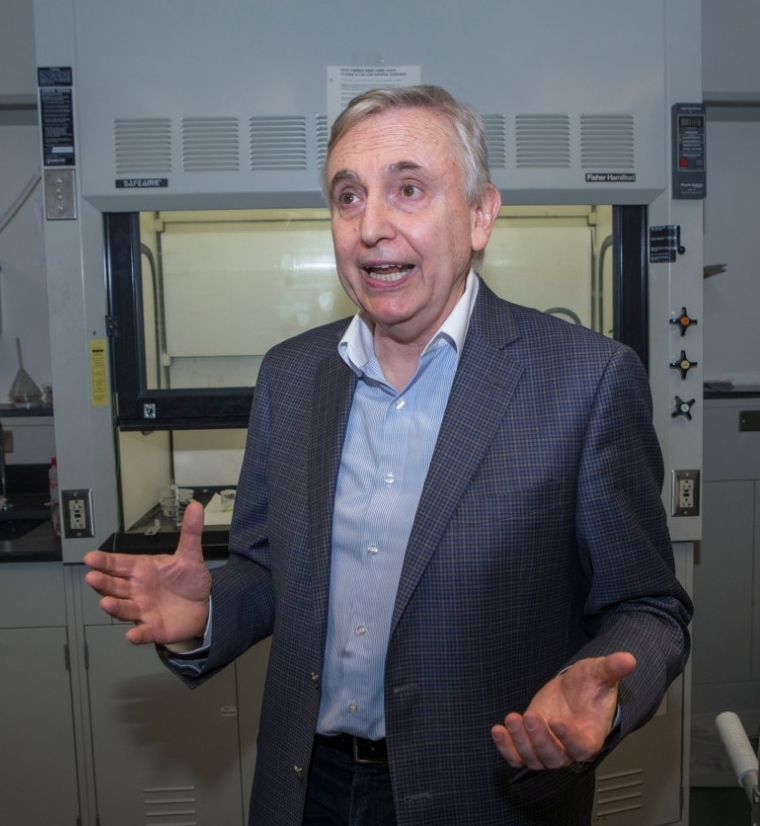 “Each particle has a nucleation point. Colloquially, we can call it a seed,” Haase said.

“Our carbon-containing gas is introduced into the reactor. When the carbon gas interacts with our ‘seed,’ it breaks down and reforms on the surface. We let it grow until it reaches the size we want,” he said.

Researchers can use almost any carbon, from alcohol to methane.

“I remember one group showed off by using Girl Scout cookies. If it contains carbon, you can turn it into a nanotube,” Haase said.

UC’s Nanoworld Lab set a world record in 2007 by growing a nanotube that stretched nearly 2 centimeters, the longest carbon nanotube array produced in a lab at the time. Today’s labs can create nanotubes that are many times longer. 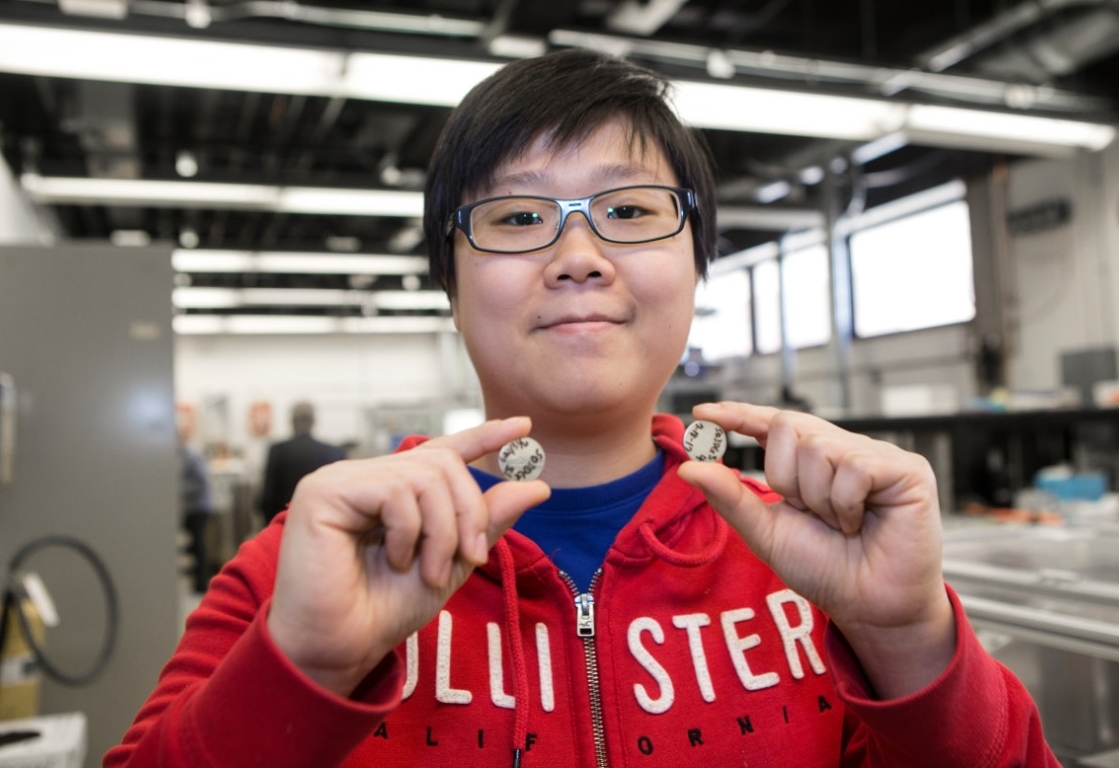 UC researchers stretch the little fibrous square over an industrial spool in the lab. Suddenly, this tiny sheet of carbon becomes a spun thread that resembles spider’s silk that can be woven into textiles.

“It’s exactly like a textile,” Shanov said. “We can assemble them like a machine thread and use them in applications ranging from sensors to track heavy metals in water or energy storage devices, including super capacitors and batteries.”

For the military, this could mean replacing heavy batteries that charge the growing number of electronics that make up a soldier’s loadout: lights, night-vision and communications gear.

“As much as one-third of the weight they carry is just batteries to power all of their equipment,” Haase said. “So even if we can shave a little off that, it’s a big advantage for them in the field.”

“On the outside, you can add a protein molecule. Cells will read that and say, ‘I want to eat that.’ So we can deliver medicine to support healthy cells, to restore sick cells or even to kill cancer cells,” Haase said.

But first researchers want to make sure that carbon nanotubes are nontoxic.

“That’s why they’ve been moving slowly,” Haase said. “Research has found that in high or acute exposure, carbon nanotubes can cause lung damage similar to asbestos. The last thing we want to do is cure one cancer with these only to find it gives you a different one.”

Preliminary results have been promising. 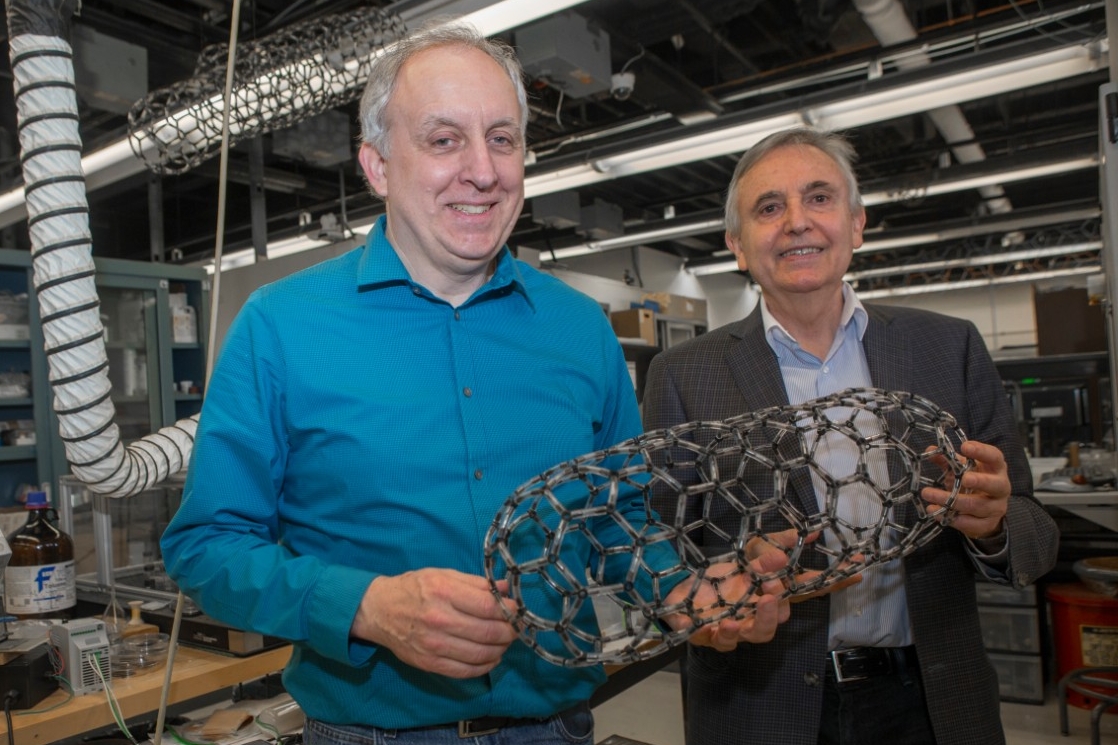 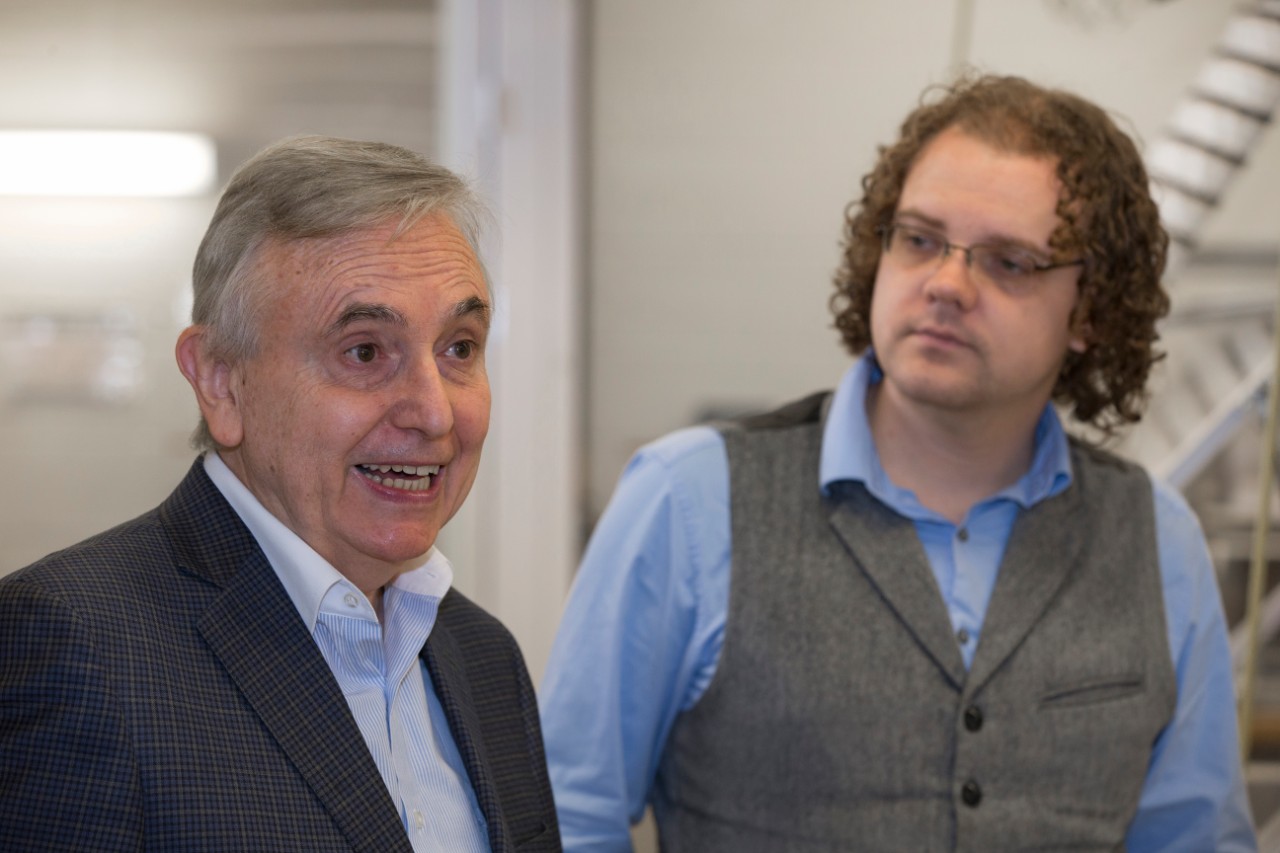 UC engineering professor Vesselin Shanov, left, and UC student Mark Haase talk about experiments they are conducting at UC and at the Air Force Research Lab at Wright Patterson. 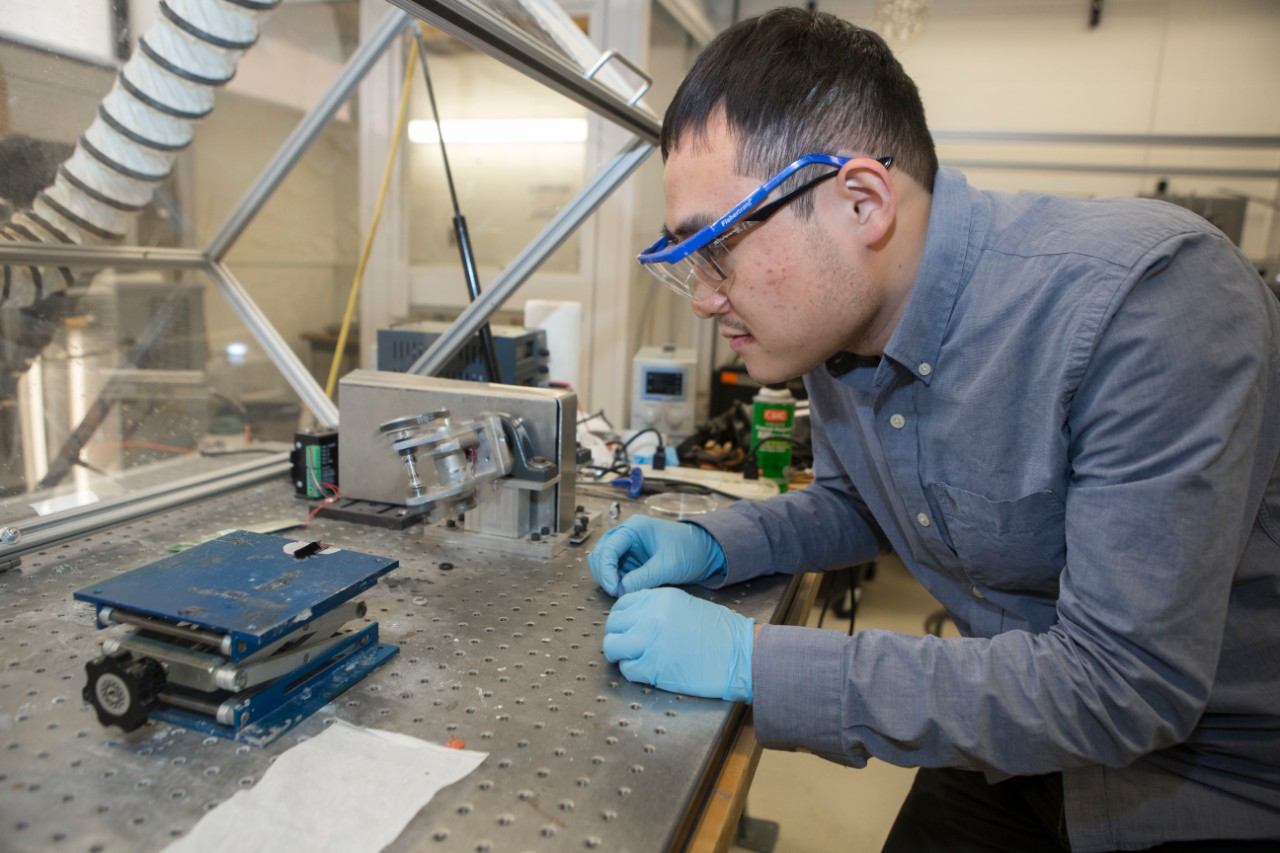 Don’t look for carbon nanotube fashions on Parisian catwalks anytime soon. The costs are too prohibitive.

“We’re working with clients who care more about performance than cost. But once we perfect synthesis, scale goes up considerably and costs should drop accordingly,” Haase said. “Then we’ll see carbon nanotubes spread to many, many more applications.”

For now, UC’s lab can produce about 50 yards of carbon nanotube thread at a time for its research.

“Most large-scale textile machines need miles of thread,” Haase said. “We’ll get there.”

Until then, mass production remains one of the bigger unresolved problems for carbon nanotube technology, said Benji Maruyama, who leads the Materials and Manufacturing Directorate at the Air Force Research Laboratory.

“There is still a lot of work to be done in scaling up the process. Pulling a carbon nanotube fiber off a silicon disk is good for lab-scale research but not for making an airplane wing or flight suit,” Maruyama said.

“The only thing holding us back is cracking the code on making carbon nanotubes at scale,” he said.

Maruyama is trying to solve that problem with a series of experiments he is conducting using an autonomous research robot called ARES. The robot designs and conducts experiments with carbon nanotubes, analyzes the results and then uses that data and artificial intelligence to redefine parameters for the next experiment. In this way, it can conduct 100 times as many experiments in the same time as human researchers, he said.

The ultimate goal is to convert UC’s academic research into solutions to real problems, Shanov said.

“We have the luxury in academia to explore different applications,” Shanov said. “Not all of them may see the market. But even if 10 percent hit, it would be a great success.” 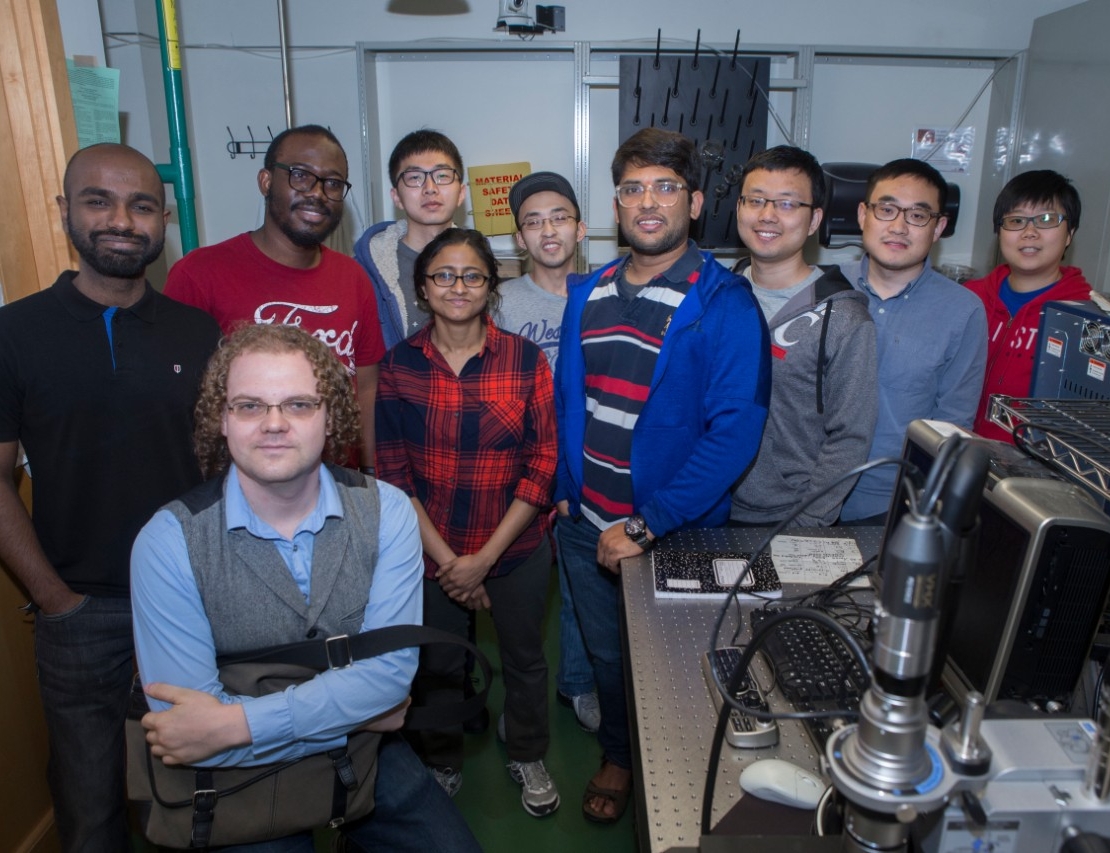 Some of the approximately 30 students who work in UC's Nanoworld Laboratories.

Do you have good research ideas? At UC, students can collaborate with colleges across campus to turn their ideas into real-world solutions. Check out UC's College of Engineering and Applied Science or explore other programs on the undergraduate or graduate level.