Cadi Dart, left, visits with students and employees at the Aramark-run MarketPointe dining center. Dart, a program coordinator with the University of Cincinnati's Advancement in Transition Services, is working with Aramark to develop a new model for supporting workers with intellectual and developmental disabilities.

There was a time when not much was expected of Karly Saeks.

Saeks is a person with an autism spectrum disorder. In high school, a vocational counselor told her parents to manage their expectations when it came to their daughter’s future. He told them that all she could really hope for was a life of mopping floors and washing dishes. They knew better and believed that their little girl had plenty to offer the world. They did worry that, as the counselor predicted, she might be held back by others who would judge her before getting to know her.

And for a while, it looked like that counselor might be right. Because of her disability, Saeks wasn’t trusted with anything more complex than folding pizza boxes or doing dishes while working at a café. She disliked the work, but worse was the isolation from her co-workers, who didn’t interact with her much. Miserable and looking for more, she sought a change.

Things turned around when Saeks began working at the Aramark-run Teachers Café in the Teachers-Dyer Complex on the University of Cincinnati’s main campus in September 2016.

Thanks to a new employment model developed by UC’s Advancement and Transition Services (ATS) and piloted by Aramark, the company behind the food and catering on campus, people with intellectual and developmental disabilities, such as Saeks, could soon have much better odds at getting meaningful work and having a happy, independent life. Today, Saeks is trusted with every task required in keeping the Teachers Café running, from inventory counts to register operation. With a little help from people that were willing to believe in her, Saeks has found the independence her parents always believed she could achieve, and she’s made friendships that are built to last. “You get great experience here,” says Saeks. “You get to do a lot of different things.”

UC’s ATS is working to even the playing field for people with I/DD. ATS offers several programs that address their specialized needs and equips them with life skills, work skills, and ideally, more independent and fulfilled lives. Serving as many as 150 individuals with disabilities from age 14 through adulthood, ATS is one of the largest university-run programs of its kind in the country. At the beginning of the 2016-17 academic year, ATS partnered with the Aramark-run UC Dining Services to create more than 50 internship and employment opportunities for high school and college students with disabilities.

Among the services offered by ATS is job coaching, which can make the difference between success and failure in the early stages of a new employment experience for many people with disabilities. Job coaches use proven, evidence-based practices in their dealings with their clients. “Evidence-based practices are different types of supports that are utilized with people with different types of disabilities that offer them more chances at being more successful in the workplace or life in general,” explains ATS program coordinator Sadie Everett. “They’re things like a visual schedule, prompting, a task analysis that breaks out the steps of a job.”

But the job coaching model isn’t without its flaws. New employees can become socially isolated from their co-workers because the job coach becomes the conduit for communications. The presence of the job coach can cause individuals to be left out of activities and socializing because their co-workers — who would otherwise naturally support them — assume they can’t or shouldn’t. In some instances, a job coach’s presence prevents the people they’re tasked to help from achieving the goal of independence in the workplace. “Job coaches don’t necessarily know the job,” says ATS program coordinator Cadi Dart. “That can create some barriers.”

Dart was looking for ways to break down those barriers forming between Aramark employees and the more than 50 students from ATS programs that the Aramark-run UC Dining Services had agreed to take on as interns and employees. “We met with some of the key players at Aramark and told them that we needed a creative solution to this,” says Dart, who noted that many of Aramark’s employees had already stepped in to help support the ATS students. “We all sat down in a very collaborative way and said, ‘How about we train these individuals to be job coaches?’” 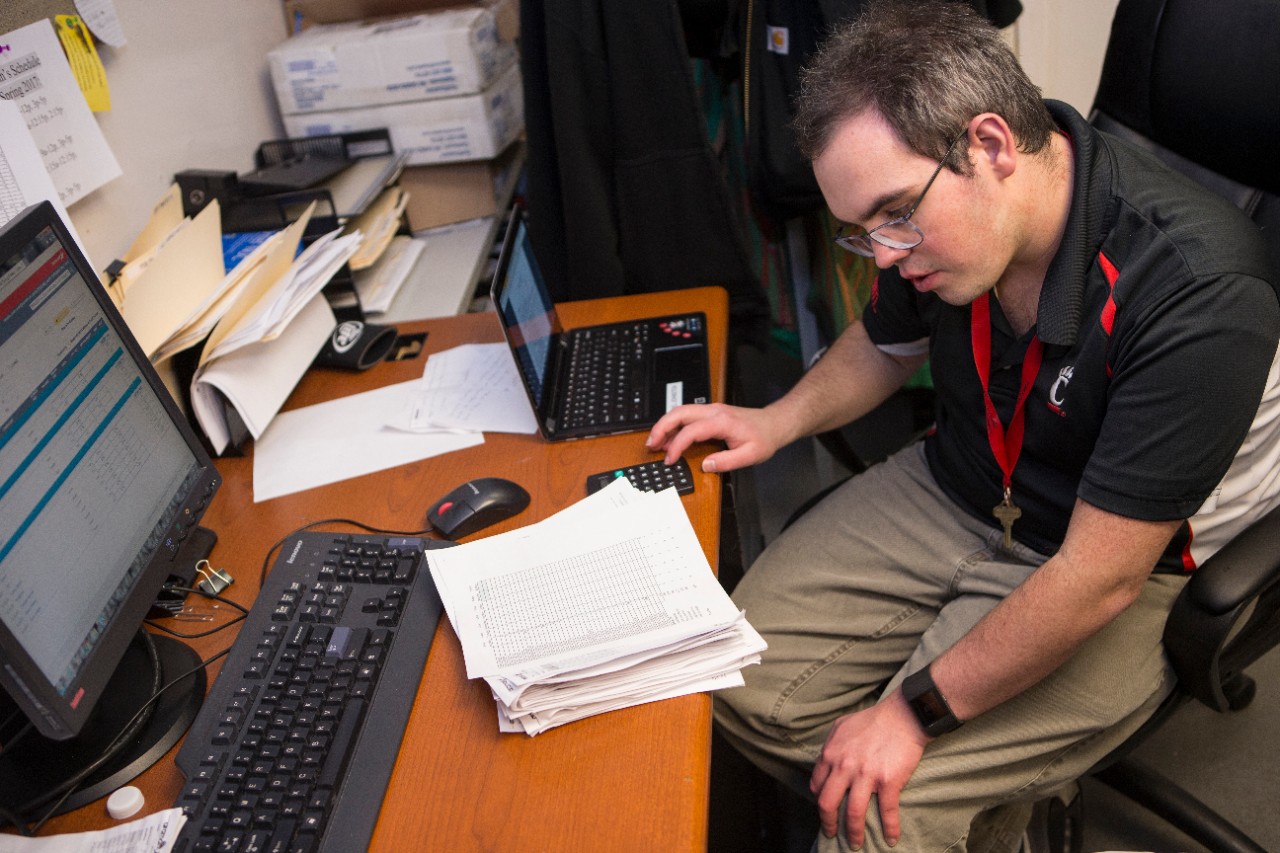 Assistant office manager Michael Johnston works on balancing the books at Center Court, an Aramark-run dining hall. Johnston is a student in the ATS-run Transition and Access Program, which provides a four-year college experience for adult students with intellectual and developmental disabilities.

McAdams, Aramark’s dining services director of operations at UC, didn’t ask for permission from above before he agreed to take on the ATS students at Dart’s request. He just did it. So when Dart approached him again and asked about training his employees on the evidence-based practices used by job coaches, he didn’t hesitate. Instead, he called up his dining and café managers and told them that this was happening. “Nobody gave me any pushback,” McAdams says. “Nobody said, ‘No, I don’t want to do this.’ It was like, ‘OK, this is right, we’re going to do this.’ It’s the right thing to do.”

Thirteen Aramark employees joined Dart and Everett for a one-day training session at the beginning of January to learn techniques that would enhance their ability to naturally support those with disabilities. In addition to learning how best to teach their co-workers how to perform their job tasks, these “natural supports” learned about providing social and emotional support both on and off the job.

Dart wasn’t sure what to expect when the newly trained Aramark employees went back to work. She had struggled to find much of anything in the way of research on the effectiveness of this method, so she made the decision to closely monitor the progress of her student workers with disabilities as they worked alongside their co-workers. She walked five miles on campus every day, making a stop at each Aramark-run cafe and dining hall along the way to check in. “At the beginning of the semester, there was a little bit more of a training component, talking through different adjustments that need to be made to help the student increase their independence level,” Dart recalls.

But that didn’t last long. Soon, instead of training and correcting, Dart’s visits started to feel less like evaluations and more like social calls. The ATS student interns and workers responded quickly, showing noticeable improvements in the ability to independently perform their job functions. The students also became more socially involved in the workplace, forming friendships that extended beyond work hours. “I think a big piece of that is allowing the student to be embedded into the culture and community of that workplace,” Dart explains. “When you see that happening, when you see that connection, you see their independence spike.”

For Robert Daniel, this is personal.

Daniel’s sister has an intellectual disability, and he gets visibly upset when he describes the conditions she endured in an adult vocational program in Florida. When Daniel, a campus cafe manager, learned about the Aramark training, he was all in. “I feel like this program definitely opens up a lot more doors for people with intellectual disabilities,” Daniel says. “It gives them that same fair shot that everybody else gets in this world.” He hopes that the program that he, McAdams, and the UC ATS team implemented will soon be more widely available and create more opportunities for his sister and other adults with disabilities.

Daniel and McAdams accompanied Dart to help present the new natural support training model and the promising early results at an Americans with Disabilities Act conference in Columbus, Ohio, toward the end of spring semester. The program generated a lot of buzz at the conference, but Dart knows there’s still a lot of work that needs to be done. “We’ve only had this running for a semester,” Dart says. “There’s a lot to learn. We’re going to continue to grow, and I think this program will evolve. From what we’ve seen in a very short time, it’s already supporting those outcomes we want to see.” Dart wants to see the program rolled out to other Aramark locations nationwide, and Everett is looking for other new partners to work with.

If executives at any companies are on the fence about the training model in their workplace, they can call McAdams and Daniel for testimonials. Both Aramark managers have seen enough. They’re believers. “Every single time, they step up to the challenge, and they continually prove everybody wrong that doubts them,” Daniel says.

“They just need that extra chance. This program allows them to get that chance nobody’s given them up to this point.” 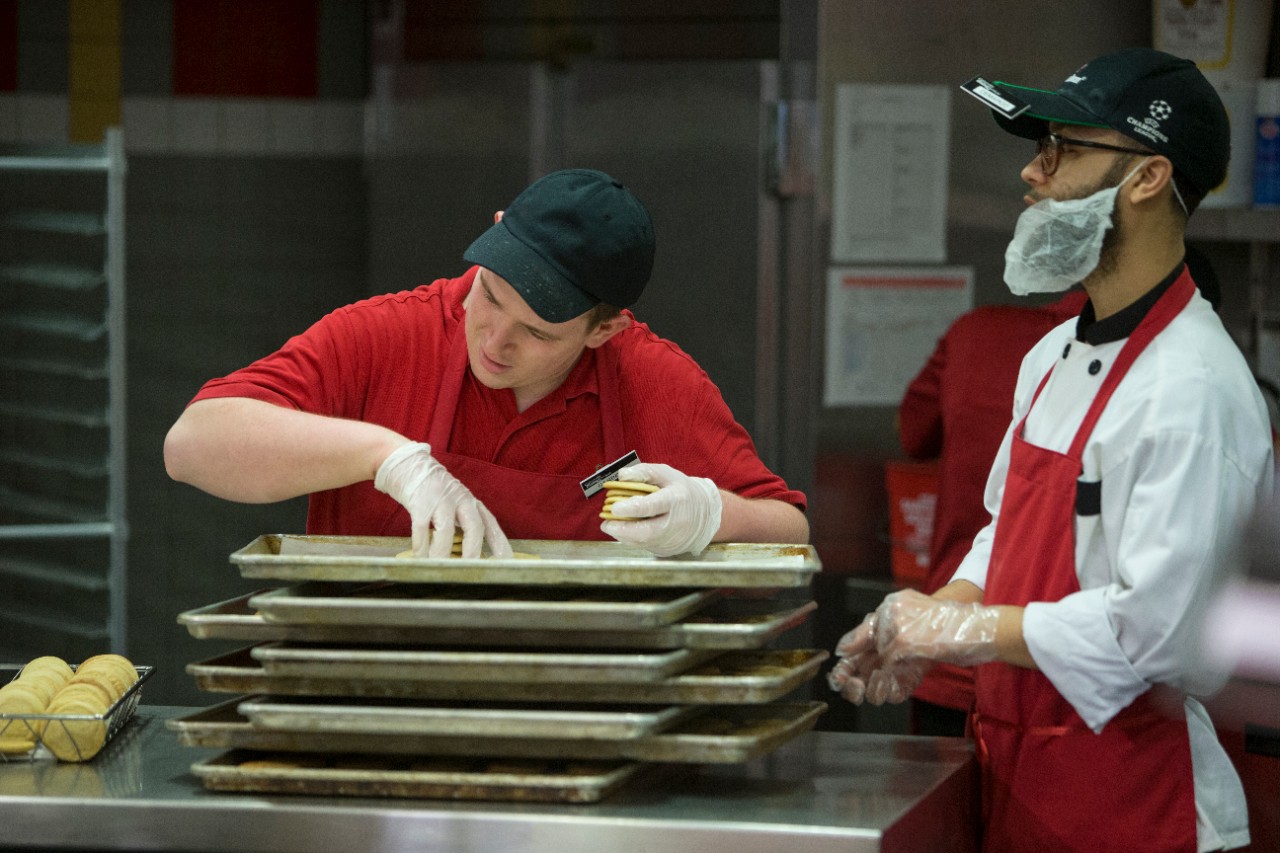 Be the one who makes the difference and changes lives.

Do you enjoy helping people? At UC, special education students enjoy small classes, talented faculty and extensive field clinical experiences. Apply to the School of Education or explore other programs on the undergraduate or graduate level.