In a corner of a new playground, children use plastic mallets to strike xylophone keys and large chimes — creating vibrations at frequencies that can be not only heard, but felt. Nearby, a wheelchair-accessible maze made of textured, colorful panels that filter sunlight to project rainbow patterns provides visual and tactile stimulation.

And those who make their way to the exit find themselves at the foot of an artificial hillside. At the playground in the Cincinnati suburb of Green Township’s West Fork Park, the climb up the side of the fieldturf-covered hill is steep. But like the maze, the musical instruments and tiny houses for children as young as six months, this hill is designed to provide an even playing field for children of all ages and abilities. Metal slides affixed to the hillside give children with cochlear implants the chance to experience sliding without the static interference they hear on plastic slides, while crawling tubes that tunnel through the underside provide a safe place for children with autism to regroup when they become overstimulated.

University of Cincinnati professor Tina Stanton-Chapman and Eric Schmidt of Playground Equipment Services spent five years observing children at play and surveying educators, community leaders and caregivers of children with disabilities to find out what was and wasn’t working at local playgrounds. 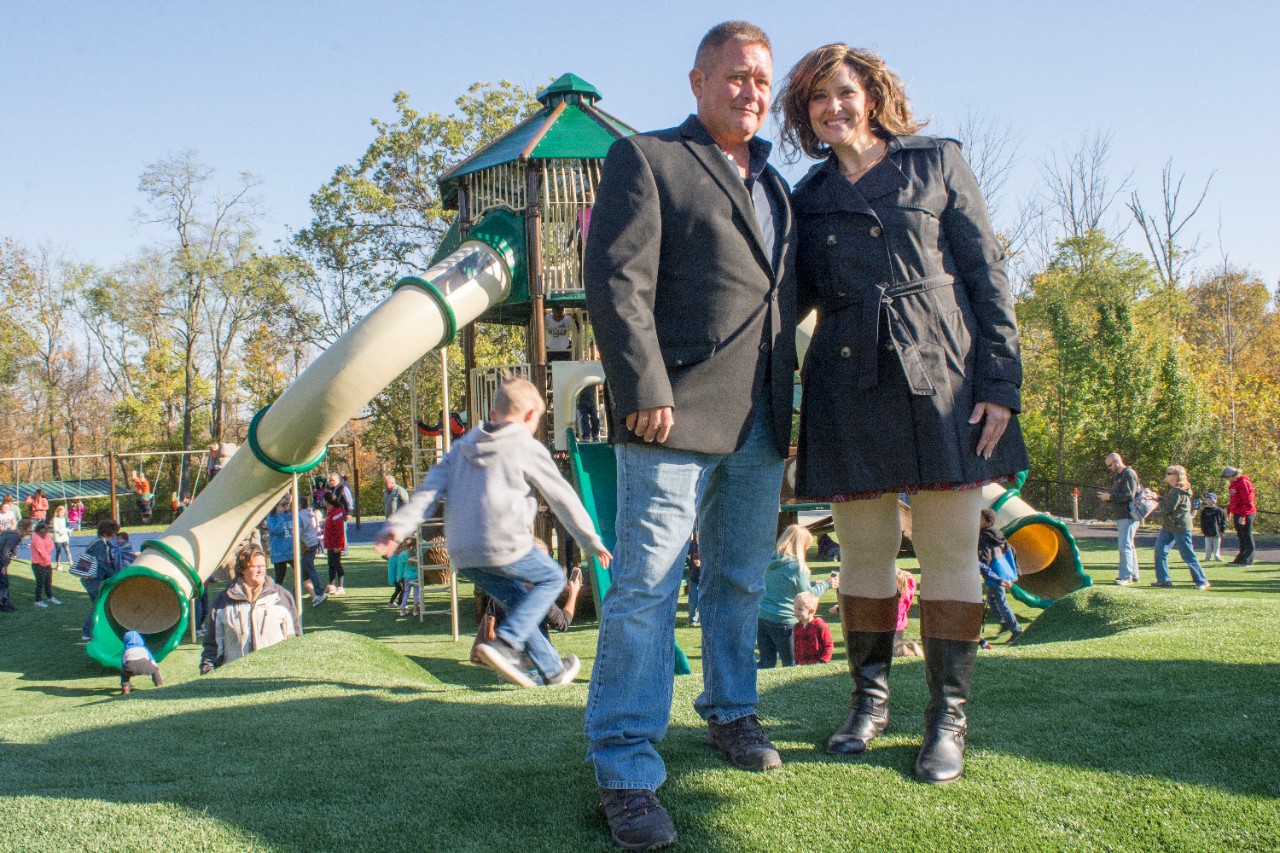 “Based on the results of these studies, we learned that caregivers and special education professionals were generally unhappy with playgrounds currently available in their communities,” says Stanton-Chapman. “Specifically, they believed that currently available playground equipment caters to children with physical disabilities and excludes children who have sensory disabilities.” Professionals noted that, while some equipment functions well for children with or without disabilities, none served both populations. From their observations, they learned that the little sensory equipment  available to children was not used often.

The West Fork Park playground was designed with those observations and survey responses in mind. The playground conceived by Stanton-Chapman and Schmidt follows the principles of “universal design,” which encourage the creation of products and environments that meet the needs of children with a wide variety of abilities. “The playground is designed for children ages 6 months to 12 years,” says Schmidt. “If a family with an infant remained in Green Township for 12 to 13 years, this playground could be useful to them for the entire time. In other words, the child grows with the playground.” Consideration given to accessibility wasn’t limited to the children who would use the playground. Parents and grandparents whose disabilities limit their mobility won’t have any trouble staying close to where their children and grandchildren are playing, says Schmidt. 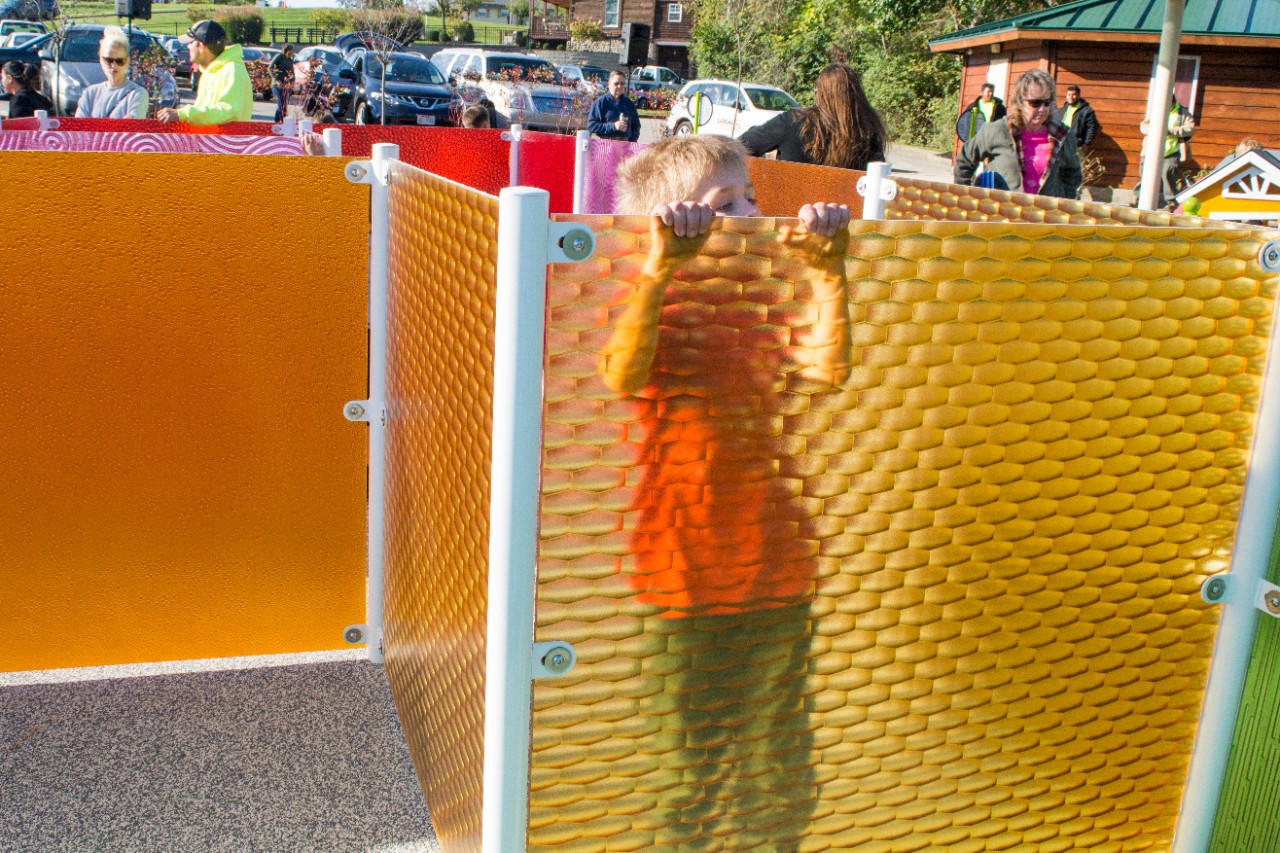 Typically, all of the equipment in a given playground is purchased from a single vendor. But that’s not the case for this new playground, which used equipment from several vendors. Some of the choices Stanton-Chapman and Schmidt made were unconventional; the panels used to create the maze came from a manufacturer that had no prior experience working on playgrounds. Others were entirely unique, such as the zip line ride purchased from a Swedish company. Stanton-Chapman believes it’s the first of its kind in North America. “It has the potential to change the playground industry” if their research proves it is the most appropriate path, she says.

Green Township officials looked on with pride as children streamed into the playground after the grand opening ceremony concluded with the cutting of a white ribbon. “To see the excitement of hundreds of children made today that much more special,” said Triffon Callos, chairman of the board of township trustees. “This will be a premier destination in the area and is such a huge asset to our community. [The] team did such an amazing job with this project. I believe this playground will be viewed as a model across the region moving forward.”

Stanton-Chapman is eager to see how Green Township’s children take to the new playground. “We will begin researching this playground to see what is working and what is not working,” she says. “We hope to build similar playgrounds at other locations and will certainly improve upon this design.”

Although a career in early childhood education isn't always fun and games, well... sometimes it is! Click here to learn about how you can pursue a career in this rewarding field.