A Hogna wolf spider shows off his magnificent visual system consisting of four pairs of eyes around the front and sides of his head, giving him a near 360-degree view. photo/Sean McCann

Biologists at UC look to the past for early genetic development of tiny spider and insect eyes to find potential for research into human visual challenges.

With the increasing accessibility of DNA sequencing, University of Cincinnati biologists are unraveling many evolutionary mysteries behind the complex world of spider vision.

Looking closely at the mysterious genetic blueprint for how these peepers develop and function is helping researchers see great opportunities for future research. New studies could include gene therapies in humans with visual problems like macular degeneration or retinal cancer.

To get to these possibilities scientists like Nathan Morehouse, UC assistant professor of biology, had to look to 500 million years ago to a time called the Cambrian Period to put the evolution of spider eye genes into perspective.

“What we found is that we go from soft-bodied ancient aquatic arthropods with no eyes, or at least eyes that don't fossilize well, to suddenly eyes that look like the eyes that we see on insects and land animals today, with basically nothing in between these stages,” says Morehouse.

And by “suddenly,” Morehouse is talking about a small evolutionary period of 50 million years.

“But for the fossil record, 50 million years is a very short time to go from no eyes to eyes like we have today,” he adds.

While primitive spiders and insects came onto land as two totally separate groups, they are likely to have carried with them some of the same developmental patterns for building their eyes.

“We can use new genetic evidence from insects as a starting point for identifying important genes that are controlling eye development in spiders,” says Morehouse. “This will excite spider biologists and people generally interested in vision into thinking about novel ways of building better vision. We’re not quite there in terms of engineering solutions for building organic eyes yet, but hopefully that’s in our future.”

Morehouse presented his findings on spider vision developmental genetics at the 2018 Society for Integrative and Comparative Biology Conference in San Francisco in January.

This reasearch, funded by the National Science Foundation, is also part of a larger project recently published in the journal The Biological Bulletin, titled “Molecular Evolution of Spider Vision: New Opportunities, Familiar Players,” by Morehouse; Elke Buschbeck, UC professor of biology; Daniel Zurek, postdoctoral fellow in UC’s biology department and researchers from the University of Hawaii at Manoa. 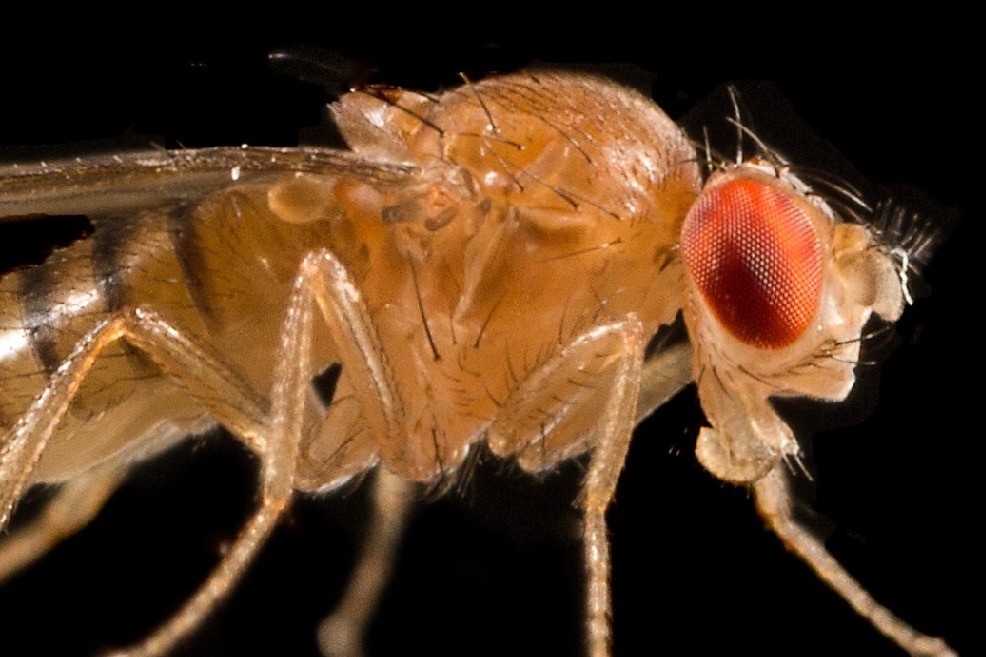 The many facets on the surface of the compound eye of a fruit fly, also know as Drosphila melanogaster. Photo/courtesy of David Duneau 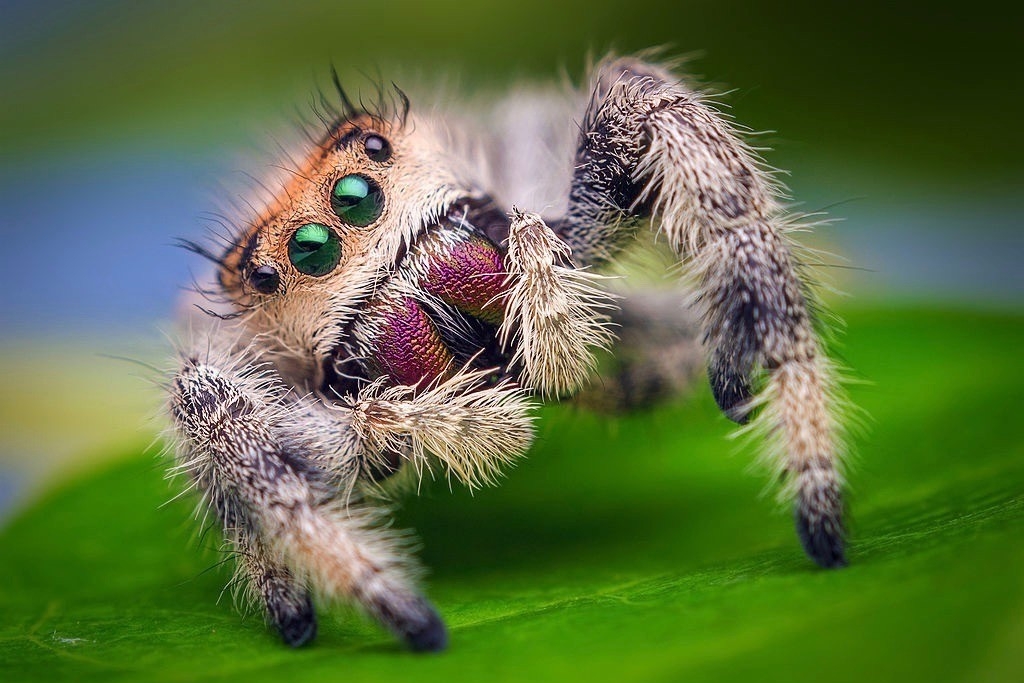 This collaborative study helps to describe the fundamentals for how spiders evolved from an ancient arthropod with a compound eye with lots of facets –– the hexagonal-shaped light sensitive units that make up a compound eye –– to multiple eyes with just a few facets.

One of the ways they do it, the researchers say, is to take a bunch of facets or visual cells and just fuse a lens on top. The other is to take a single facet and just make it bigger and then add more light sensitive cells down below during embryonic development.

“We think that during the Cambrian Period, more than 500 million years ago, ancient arthropods had two big compound eyes somewhat similar to modern fruit flies,” says Buschbeck. “But at some evolutionary point in time in spiders the compound eye likely split into one pair of medial or central eyes in the front and a pair of lateral compound eyes found on the sides of the head. But according to the evidence we uncovered, they may have retained the ancient network of genes to build them.”

While insects and spiders are known to have evolved at the same time during the Cambrian Period, Morehouse says they ended up in totally different places. They used the same basic tool kit to build their eyes but the precise details of the genes are slightly different.

“Years of careful developmental genetics have shown us how fruit flies built their compound eyes and medial eyes –– or ocelli –– from networks of interacting genes,” says Morehouse. “So we looked at whether those genes play exactly the same role in spiders or whether the roles changed. And in spiders we do find the same blueprint still there at least in rough copy!” 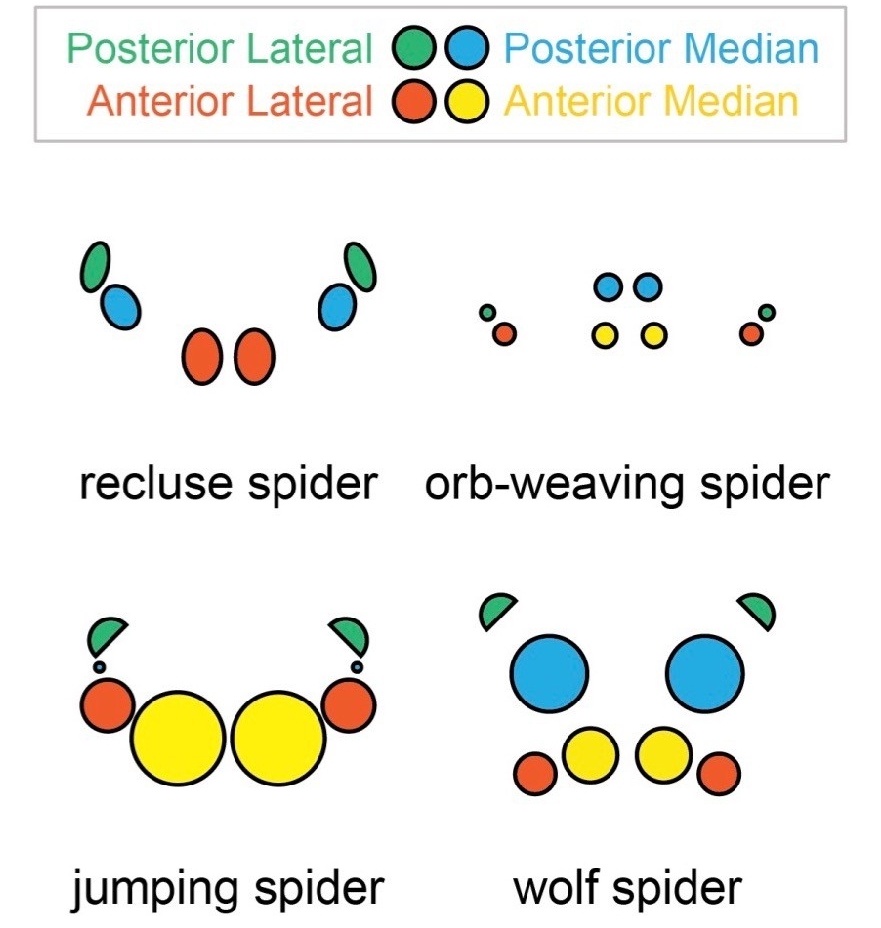 "We argue that the ancient plan for medial and lateral compound eyes is what gave rise to the four pair of distinct eyes we see today. That fundamental split in development, as well as how the retinas are built in modern spiders happened over 500-million-years ago."

This phenomenon also presents a critical consequence for the miniature eight-eyed critters, as Morehouse says they cannot add more photoreceptor cells to their retina once the lens is put on top. After looking closer at the developing retinal cells the researchers found that spiders build their eyes as little embryos complete with all the retinal cells they will ever need and then put the lens on top.

So how do they solve the problem of having a large number of retinal cells tightly packed into a head one-tenth the size of an adult spider?

It turns out that the densely packed cells have more little pixels than their lens can actually resolve resulting in sampling the same point in space many times instead of once. But the tiny octopods may have to perform unusual optical tricks to process their blurry vision. This isn't the "smartest" way to engineer an eye, say the researchers. Camera designers attempt to match the resolution of the camera sensor to the resolving power of the lens.

“One of the most fascinating insights here is that because we understand the genetic basis for how they build these eyes we can understand why they do things like put all these retinal cells into this tiny animal,” says Morehouse. “What appears as a dumb idea from a strictly visual standpoint turns out to be part of the blueprint from that 500-million-year-old arthropod.”

It takes basic research like this to understand the intricate genetic development but the researchers say it opens up some really cool opportunities for future biotechnology. 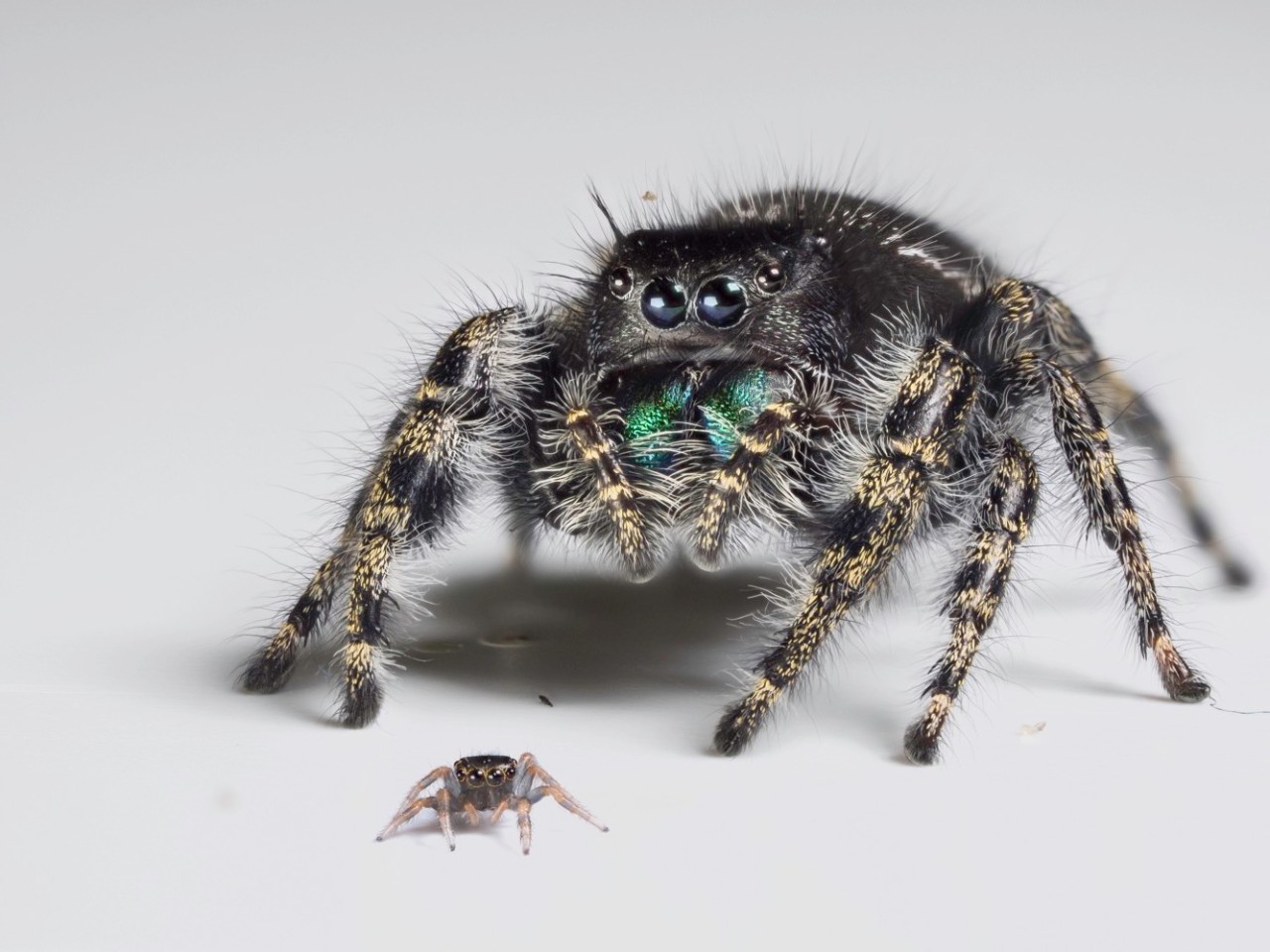 Both the adult and tiny juvenile jumping spider have the same number of retinal cells in their eyes. Each cell is smaller and more densely packed in the young spiderling's head one-tenth the size of the adult. Photo/Daniel Zurek

“We would have never counted the number of retinal cells in these tiny juveniles if we had not suspected this early on,” he adds.

In spite of the size disadvantage and cell overcrowding, the researchers find the juveniles doing many of the sophisticated things their big brothers can do such as deciphering between different kinds of prey like a mosquito versus a fly.

While Morehouse describes this research as the beginning stages of understanding the advantages and handicaps to building eyes this way he sees great opportunities for mimicking tiny visual systems to produce sensors smaller than any in regular use today.

“If we have to build a lens to be tiny, smaller than any sensor right now and small enough to be easily swallowed as a pill for endoscopic work, it’s possible these spiders can lead to biotechnologies we have never imagined,” says Morehouse.

“These spiders have done some really clever things to their lenses, the shape of their retinas and the size of their retinal cells that help them to surmount incredible challenges.”

Other surprising findings revealed unique patterns for retinal cell death in young spiders. When retinal cells die they are much more likely to die in the center of the retina than in the periphery, which the researchers say is exactly what happens in humans with age and the problem with macular degeneration.

“Because we see these kinds of changes happening in jumping spiders when fed poor diets we might discover things that help us better understand macular degeneration and other human-centric problems,” says Morehouse and Buschbeck.

The principal long tube-shaped eyes of this transparent spiderling (Thiodina sp.) can be seen moving in the carapace (hard outer shell). As is visible here, jumping spiders achieve better acuity out of a small visual system by moving the sensor around behind their lens. Video/Daniel Zurek

While this project is still considered basic science, Morehouse explains basic science as limited only by the creativity of nature.

He points to the Mars Rover as an example of using optics that were inspired by jumping spider vision. Prior research revealed how jumping spiders achieve better acuity out of a small visual system by moving the sensor around behind their lens. This inspired NASA to build a sensor for the Rover that moves around behind its camera lenses, now providing better imaging on Mars.

“What we have done here is use information about the ancient history of spiders to look for genes that participate in vision and we have found that many of our educated guesses are correct,” says Morehouse. “There are genetic similarities in insects that are also being used in predictable ways in spiders. This opens a whole set of new work to understand how spider vision, while unique, might be similar or different to what we know from mammalian vision like our own.

“Indeed there are insights that come from work on fruit flies that have helped human health so it’s quite possible that the next thing we learn about human vision comes from spiders.”