University of Cincinnati field research aims to slow the spread of tick-borne illness across the Midwest.

Ticks are nasty little survivors, outlasting even dinosaurs as they resist drought, tolerate cold and go months without a meal.

They carry a host of diseases that they spread by plunging their barbed mouths into you like a grisly oil derrick. They’re hard to remove and even harder to kill.

Is your skin crawling yet?

Researchers at the University of Cincinnati are examining the tick’s defenses, looking for ways to prevent tick-borne illnesses such as Lyme disease.

Biology students and professors in UC’s McMicken College of Arts and Sciences are studying the distribution of ticks in southwest Ohio, the diseases they carry and their ability to withstand Midwest winters. Improving our understanding of these cringe-inducing parasites could help hikers, dog walkers and nature enthusiasts stay healthy.

“There are still so many things we don’t know about ticks,” said UC assistant professor Joshua Benoit, who is supervising the research. “They’re known for transmitting even more diseases than mosquitoes.” 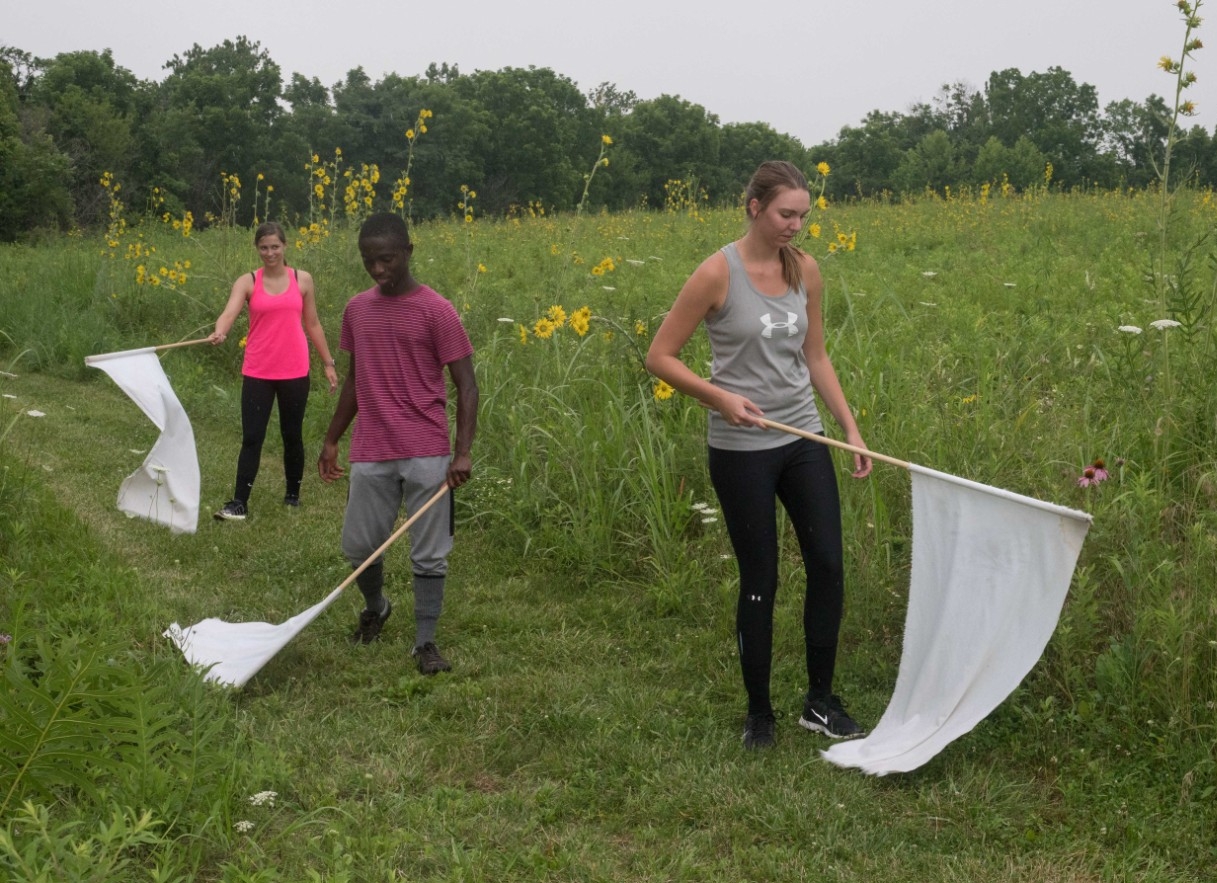 UC biology students use fleece flags to catch ticks in a meadow. 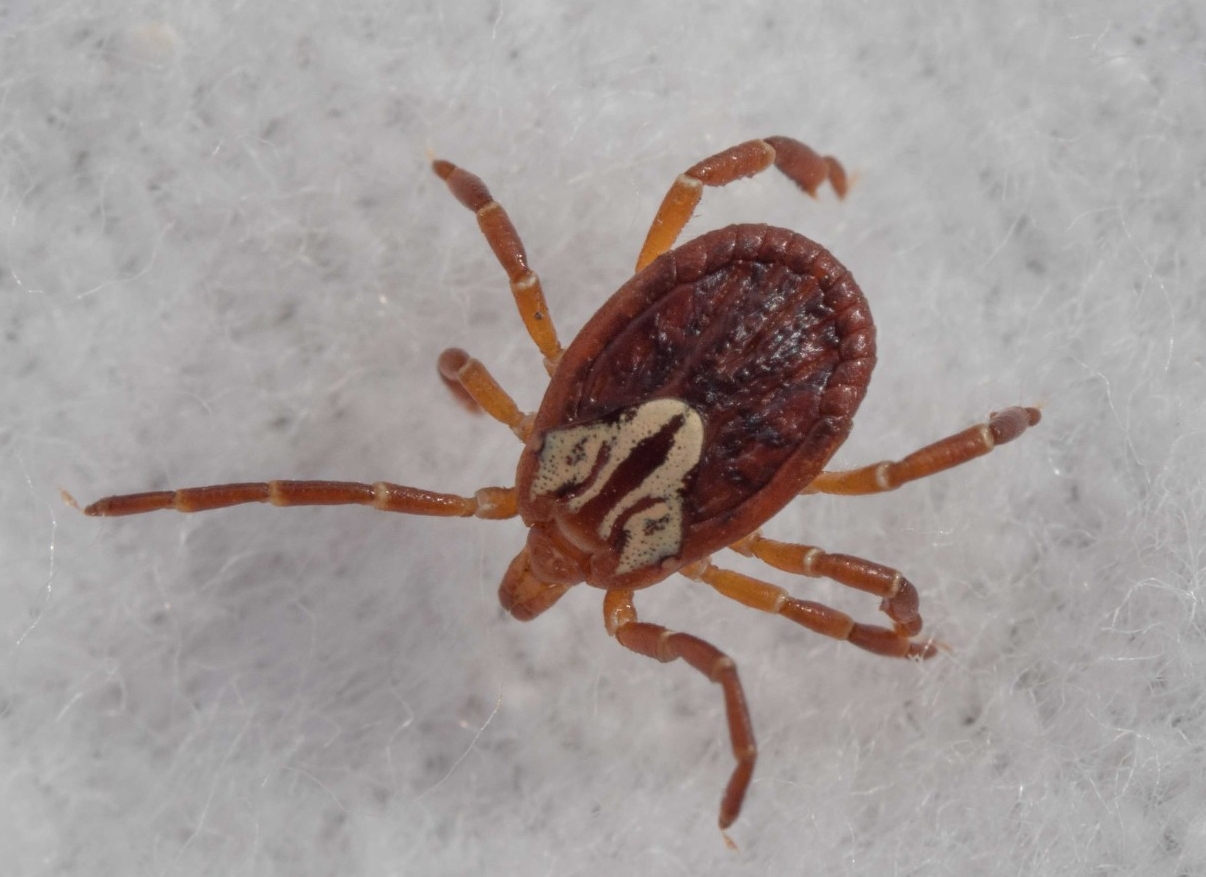 Four species are found in southwest Ohio. They are shaped like a watermelon seed but can vary in size from a poppy seed to the head of a push pin, with eight legs and a hard, protective shell. Hungry for a meal, they climb to the tip of a blade of grass or twig and wave their extra-long, hook-tipped forelegs in the air, a behavior called “questing,” until a rabbit, deer or human brushes past. They can detect carbon dioxide from their would-be host so they are ready to latch onto fur – or denim – if given a chance.

Ticks have ferocious barbed mouthparts like ratchets that allow them to pierce deeply into the skin and remain embedded while feeding on the host’s blood. They transmit diseases through their saliva in the form of spirochetes, corkscrew-shaped bacteria that whirligig through the host’s bloodstream.

Students in UC’s Department of Biological Sciences regularly collect ticks at parks in Hamilton and Butler counties. Ticks are expensive to cultivate in a lab. They require a live host such as a mouse or rabbit. So for some studies, UC buys ticks from a lab at Oklahoma State University.

Surveillance research begins at UC’s Center for Field Studies northwest of Cincinnati next to Miami Whitewater Forest. The field station is home to other UC research projects examining the natural world from native birds to butterflies. 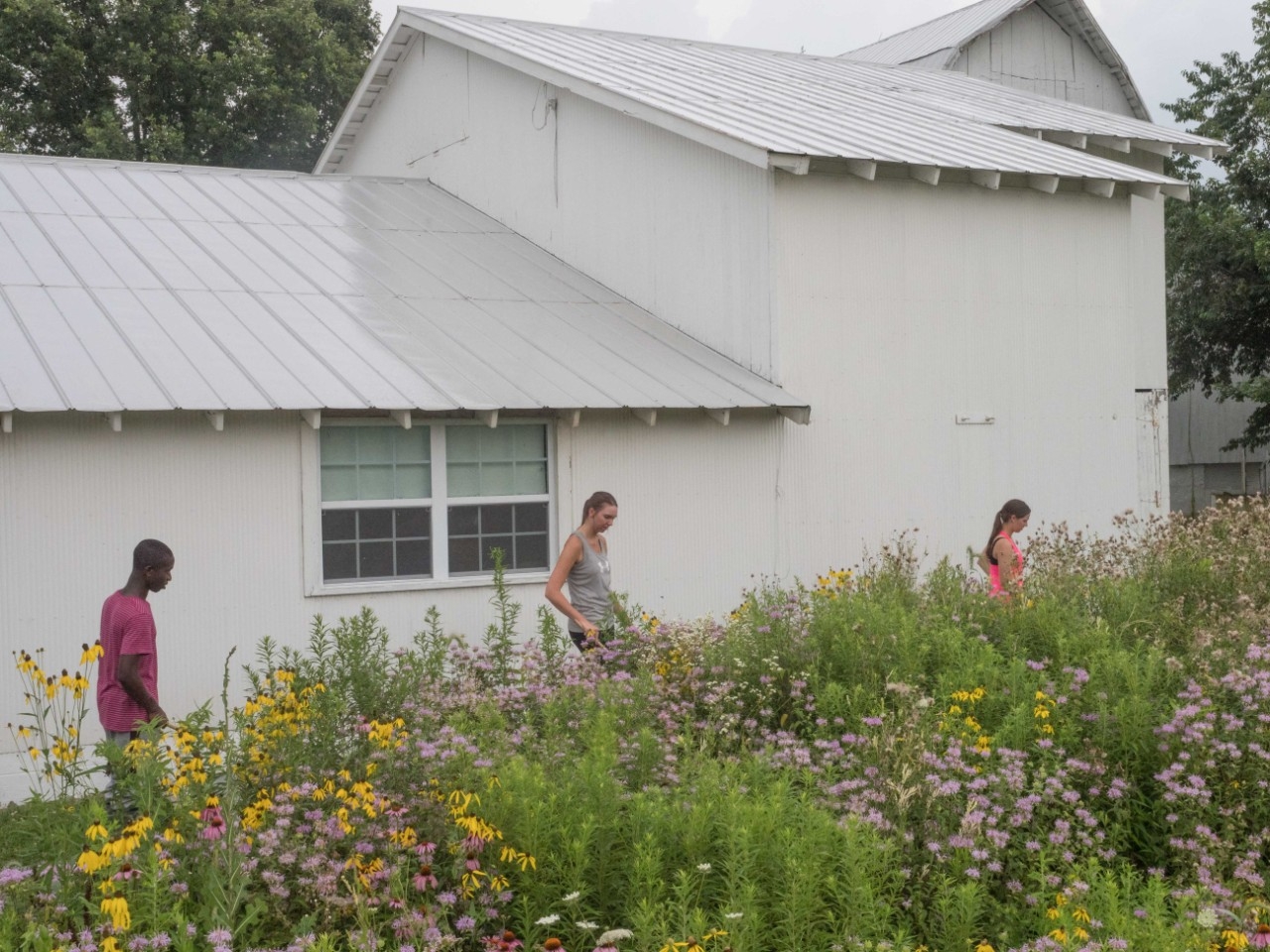 Biology students drag fleece flags over the underbrush to collect ticks in a meadow at UC's Center for Field Studies.

On a recent morning, UC postdoctoral fellow Andrew Rosendale and students Alicia Fieler, Benjamin Davies and Madisen Kimbrel dragged flags made of fleece over bushes and meadows full of summer wildflowers to collect ticks for their study.

“Among those three species, ticks were the best choice,” he said. “And working at the field station is a good way to get outside and experience nature.”

Fieler, 21, a graduate of the Cincinnati-area Oak Hills High School, wants to become a nurse practitioner. She has contributed to three published research papers on ticks so far as an undergraduate. The fieldwork at UC is giving her valuable experience both inside and outside the lab, she said.

“I’ve learned so much – lab techniques and even simple things like safety protocols and basic lab procedures, how to run assays and bring all the data together,” she said. “Having this background in science will help me with future research as well.”

Kimbrel, 20, a biology major from Monroe, Ohio, said studying a topic that has potential medical implications is a good research fit since she wants to pursue a career in medicine.

“It’s great because you can take what you’ve learned in the classroom and apply it to the real world,” she said. 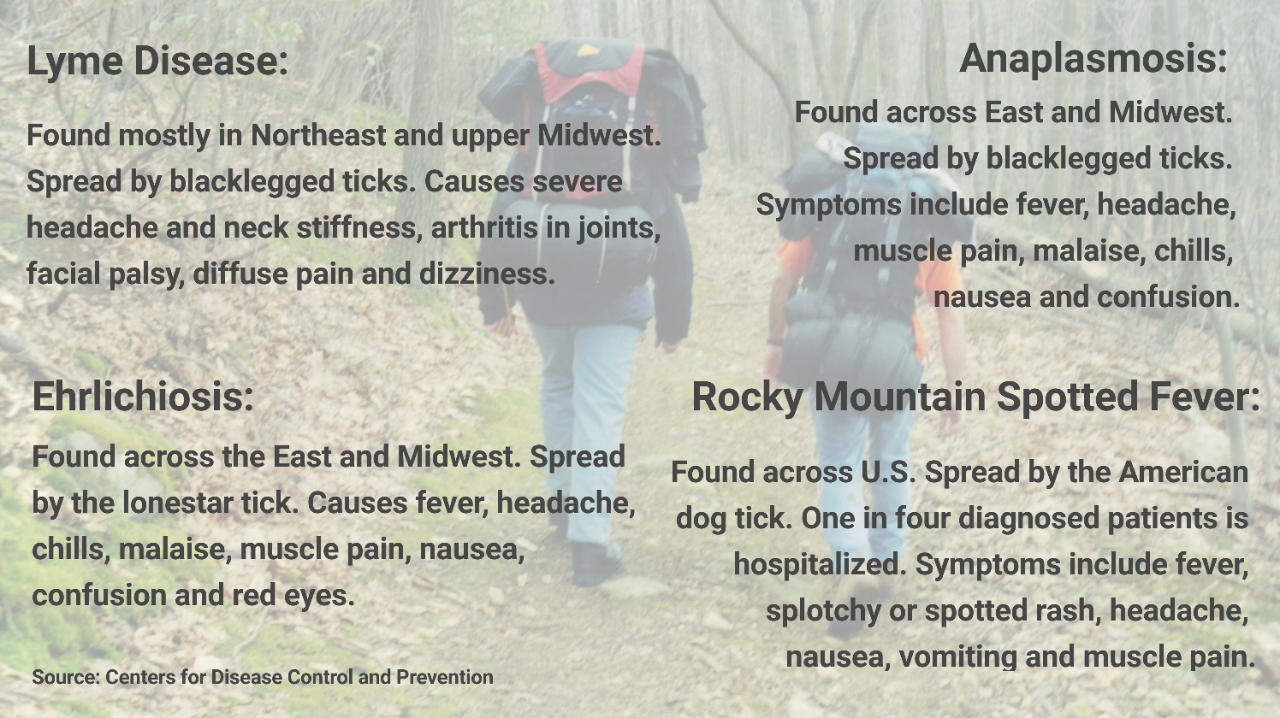 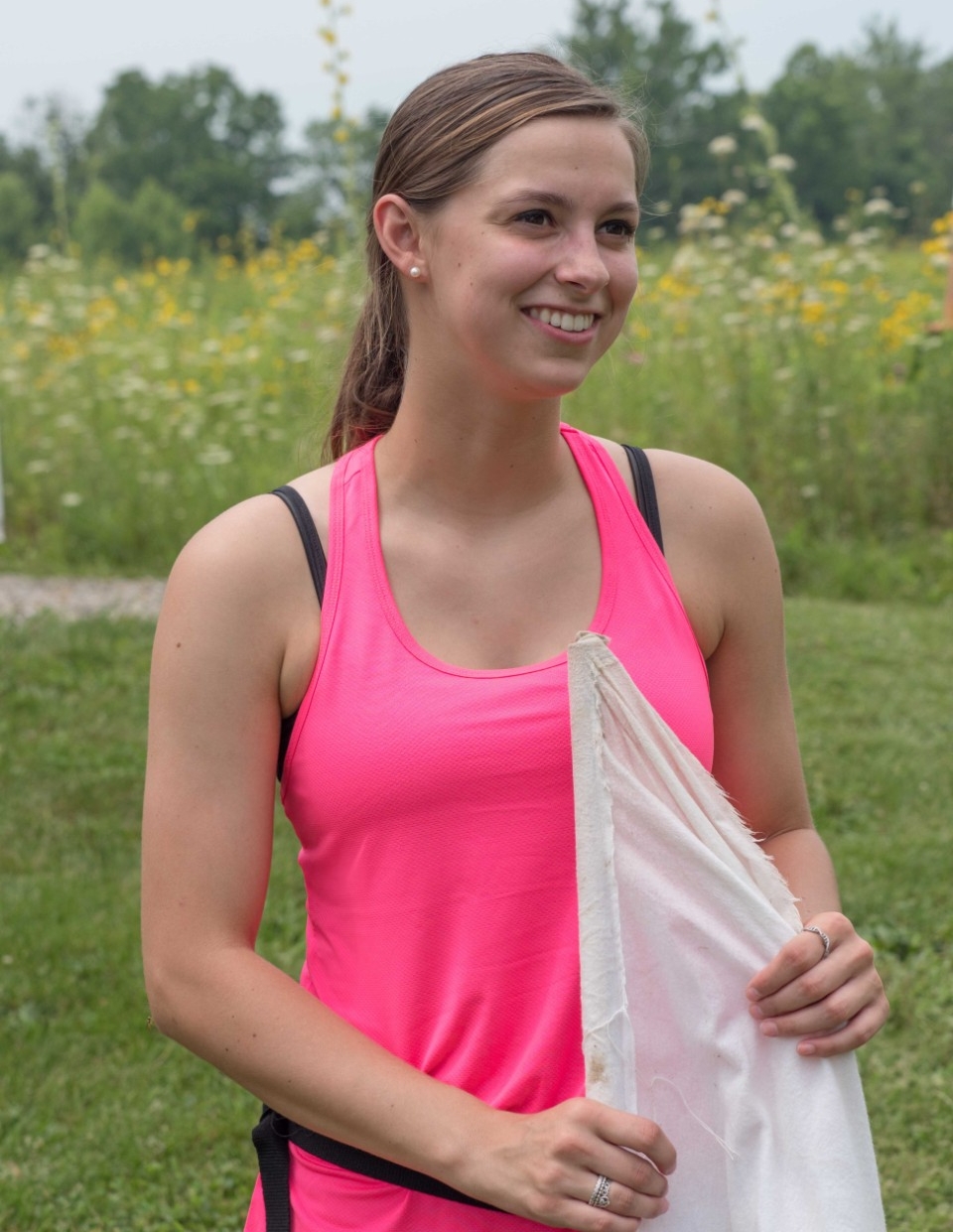 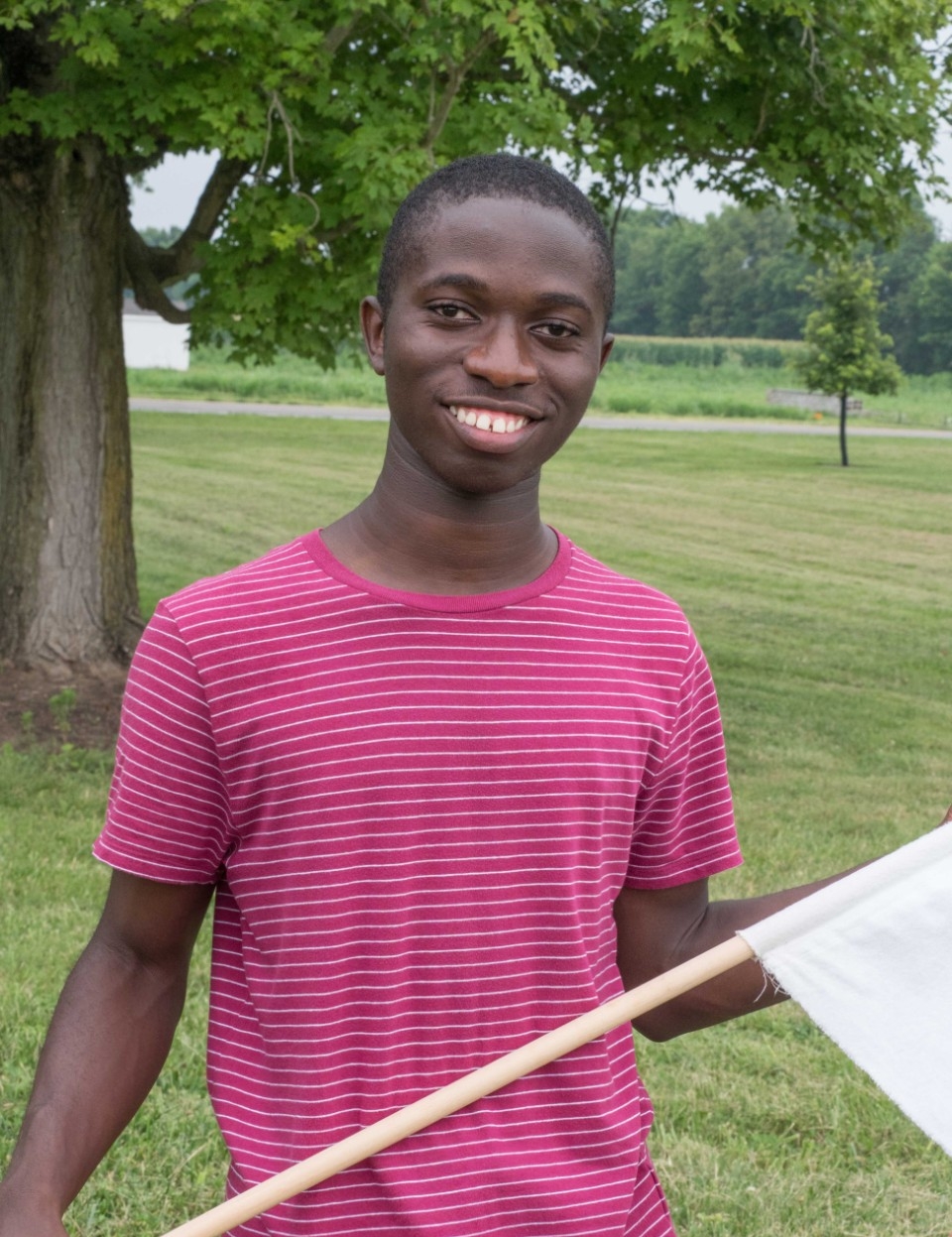 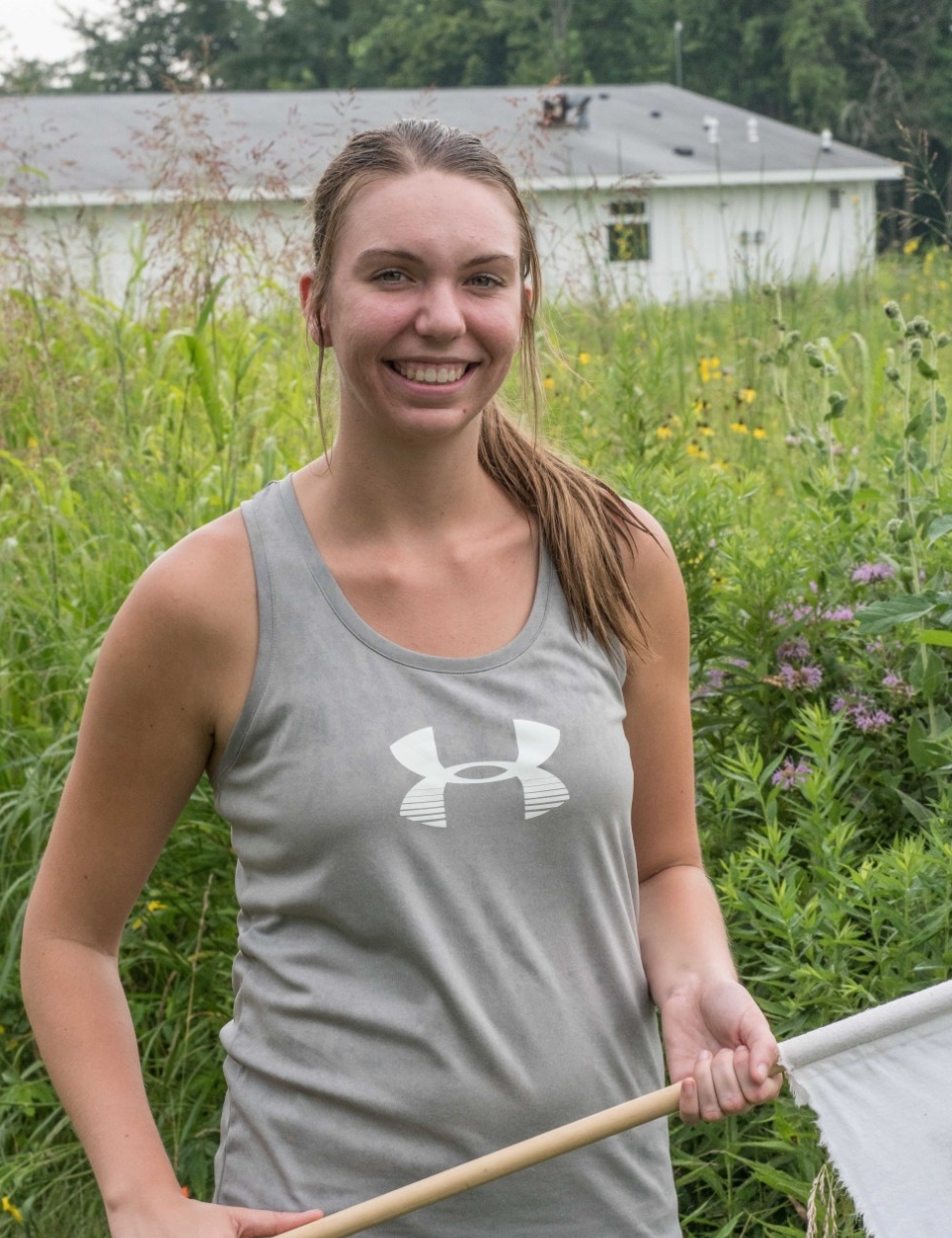 From field to lab

Back at professor Benoit’s biology lab, the students measure the levels of lipids, proteins and glycogen in the tick specimens. Higher fat content is an indication of good tick nutrition. And they can identify what diseases, if any, the ticks carry.

Once tick eggs hatch, the baby parasites seek a blood meal in each of their next three lifecycles: larvae, nymph and adult.

“They can transmit the disease at any stage of their life if they get infected. It’s much more common to be bitten by an adult around here. But they can pick up the disease as a larvae or a nymph as well,” UC’s Rosendale said.

And they live for up to six years.

Rosendale, co-author of numerous studies on ticks, said the goal of the research is to find ways to slow or halt the spread of disease.

“We want to find better ways to kill them by studying the mechanisms of resistance of ticks to pesticides,” he said.

Fossil evidence suggests ticks fed on dinosaurs and other Cretaceous creatures 90 million years ago. Today, ticks contract Lyme and other diseases from animals such as mice that serve as reservoirs for the bacteria.

“Ticks carry countless diseases. New ones are identified all the time,” Benoit said.

Besides Lyme, ticks in many Midwestern and Northeastern states are known to carry diseases such as anaplasmosis, ehrlichiosis and Rocky Mountain spotted fever. The bite of some lone star ticks in Kentucky and Indiana has been linked to an immune response that causes some people to become allergic to red meat, a disorder called alpha-gal.

“It’s a bizarre condition. People talk about it but it’s relatively rare,” he said. 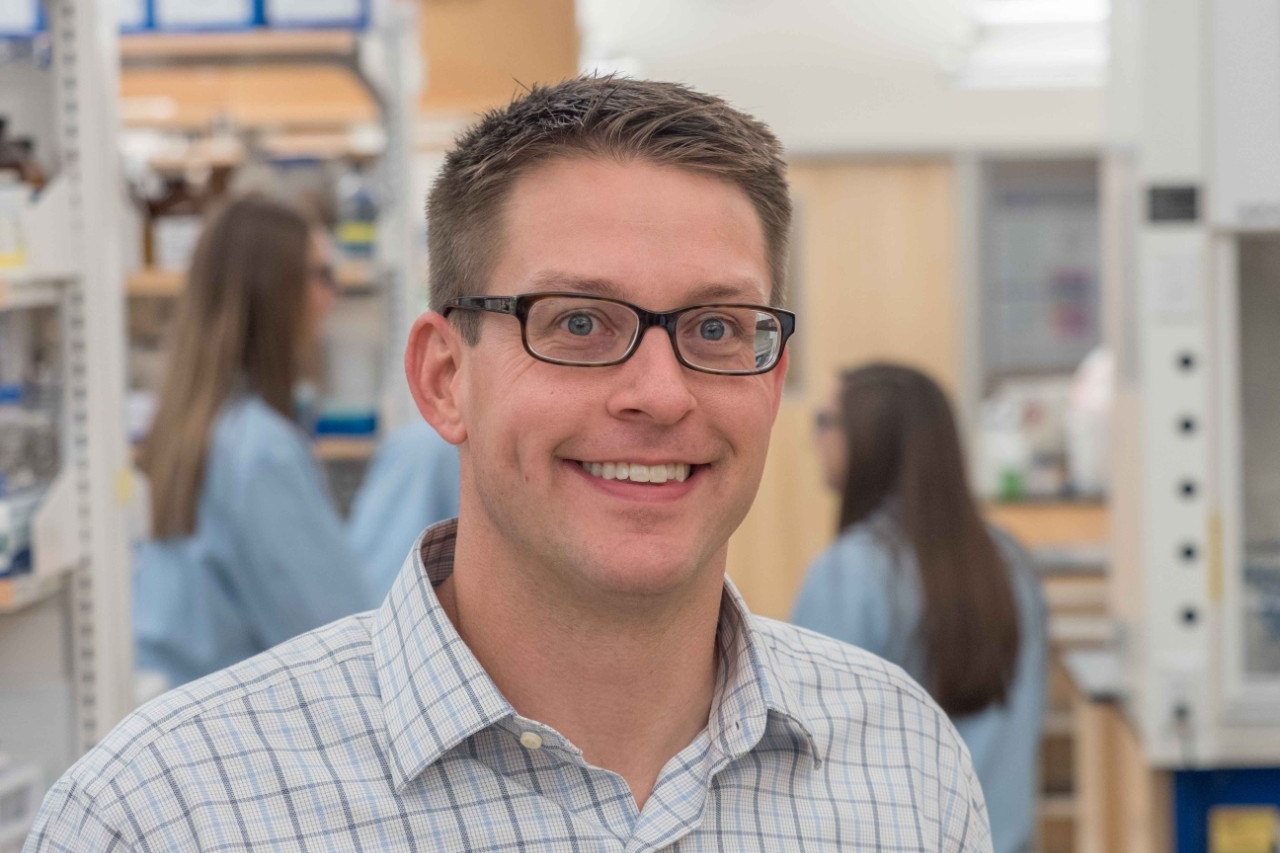 "There are still so many things we don't know about ticks. They're known for transmitting even more diseases than mosquitoes."

Doctors have to be vigilant about tick-borne illnesses, even those not commonly observed in this area, said Dr. Carl J. Fichtenbaum, an infectious disease specialist at the University of Cincinnati Medical Center and the Cincinnati Veterans Affairs Medical Center.

“Lyme is uncommon here. We see a handful of cases each year,” he said. “Someone goes to Cape Cod for vacation and gets bitten by a tick and comes back with an infection.”

“They may get the characteristic bullseye rash around the bite, but that doesn’t happen in everyone,” he said.

Unlike mosquitoes, which transmit viruses such as West Nile or Zika in their bite, ticks transmit bacteria when they bite us, Fichtenbaum said.

“With tick-borne diseases, we don’t have immunity to bacterial infections. We can get infected over and over again. Our body isn’t capable of fending it off,” he said.

A simple course of antibiotics cures most tick-borne diseases. Fichtenbaum, a professor of internal medicine at the UC College of Medicine, said surveillance efforts such as UC’s ongoing study are invaluable in helping doctors understand the likelihood of patients contracting diseases from local ticks.

“I think it’s great to sample the population of animals and insects to understand zoonosis, disease transmitted by live animals,” he said. “It’s always good if we’re keeping track of what’s out there so we know the possibilities.” 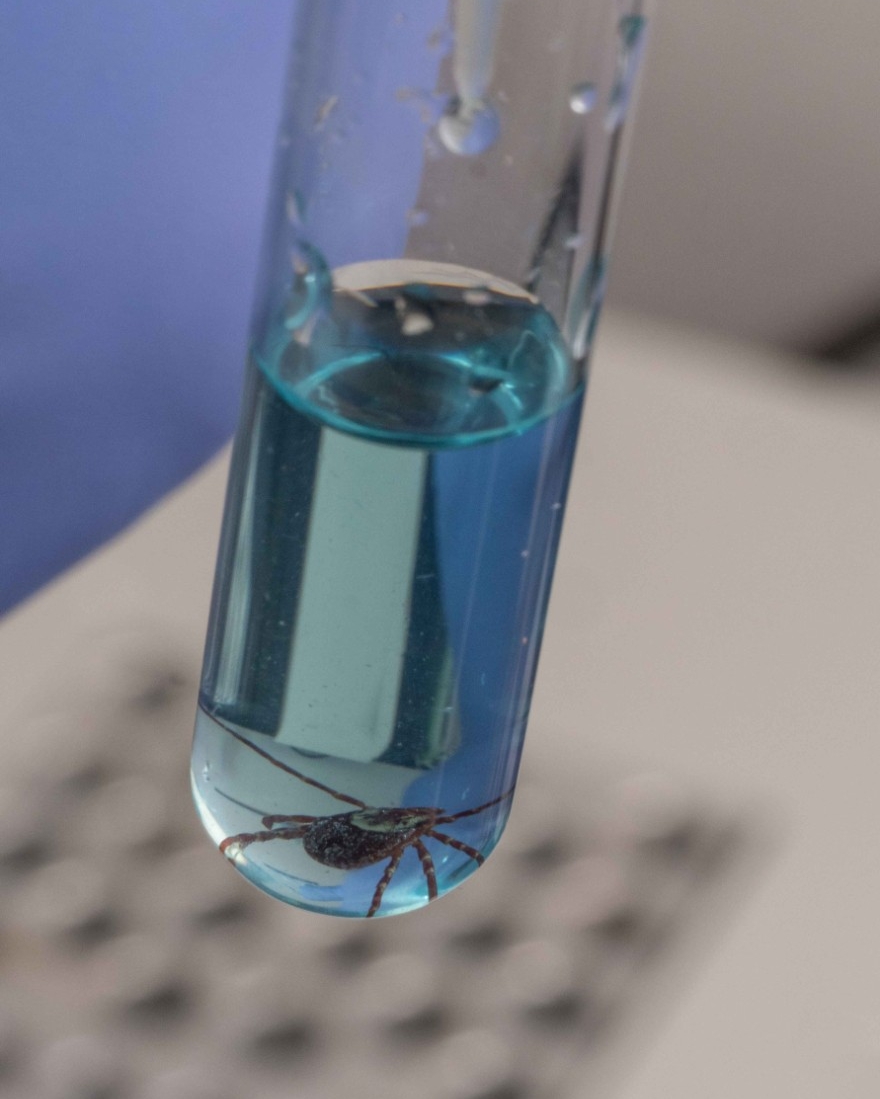 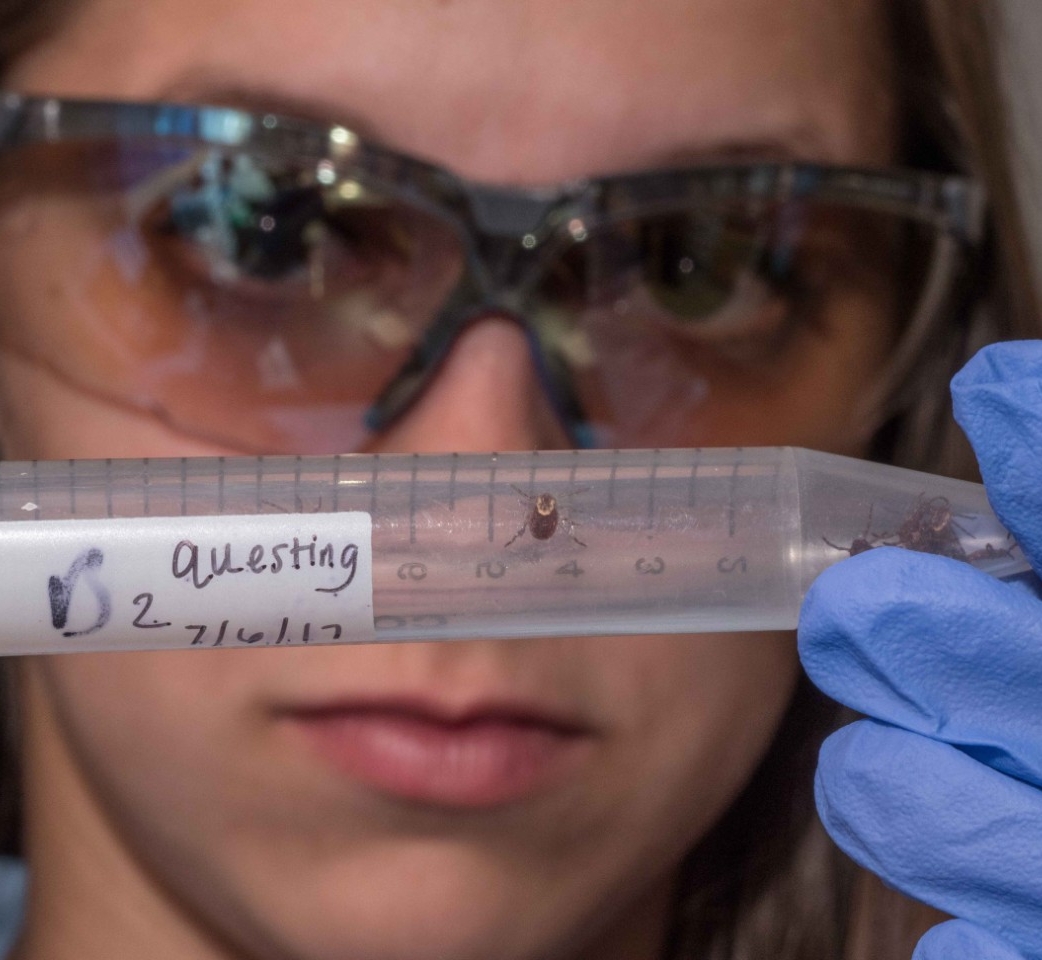 Lab tests reveal the health of ticks collected and what diseases, if any, they carry. 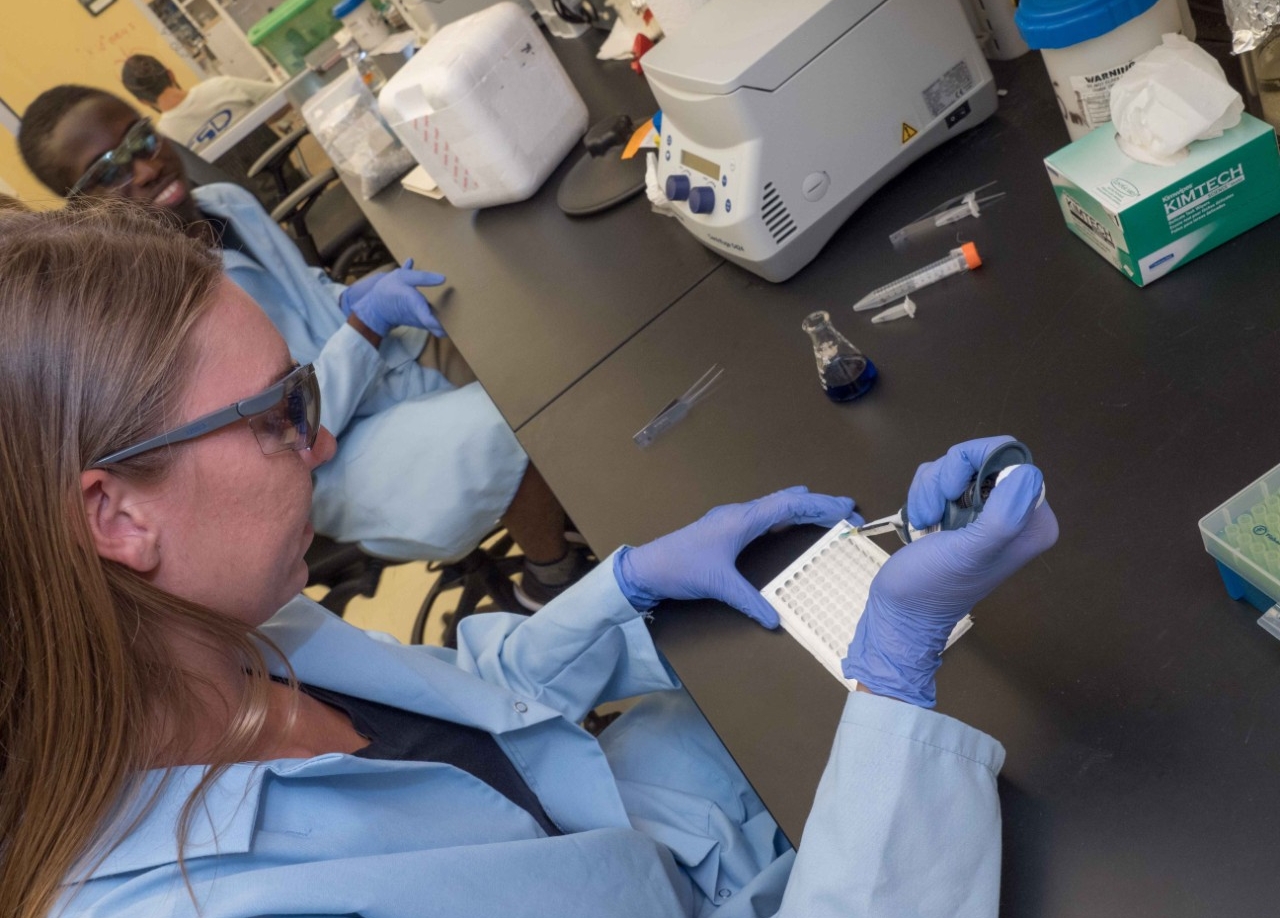 So far Lyme has not been found in the ticks Benoit’s team has collected locally. But one species, the dog tick, is a known carrier of Rocky Mountain spotted fever, which causes headache and fever and, sometimes days later, a spotted rash. It’s prevalent in Midwest and mid-Atlantic states.

Left untreated, tick-borne diseases can cause a cascade of problems from hearing loss to neurological complications.

About 30,000 cases of Lyme disease are reported each year to the Centers for Disease Control and Prevention. The disease was observed in patients across 40 states in 2015. But this does not capture all diagnosed cases – or the many suspected cases that go undiagnosed each year, the agency said. A 2015 study by the CDC used medical-insurance claims between 2005 and 2010 to estimate that 329,000 people contract Lyme each year in the United States.

“The vast majority of research into tick-borne illness is where Lyme disease is prevalent – in the Northeast and upper Midwest,” UC’s Rosendale said. “It hasn’t received a lot of attention in Ohio because historically Lyme disease hasn’t been as common. We didn’t have the blacklegged tick here. But recently we’ve been seeing more and more of that species and so Lyme disease is becoming more of an issue.” 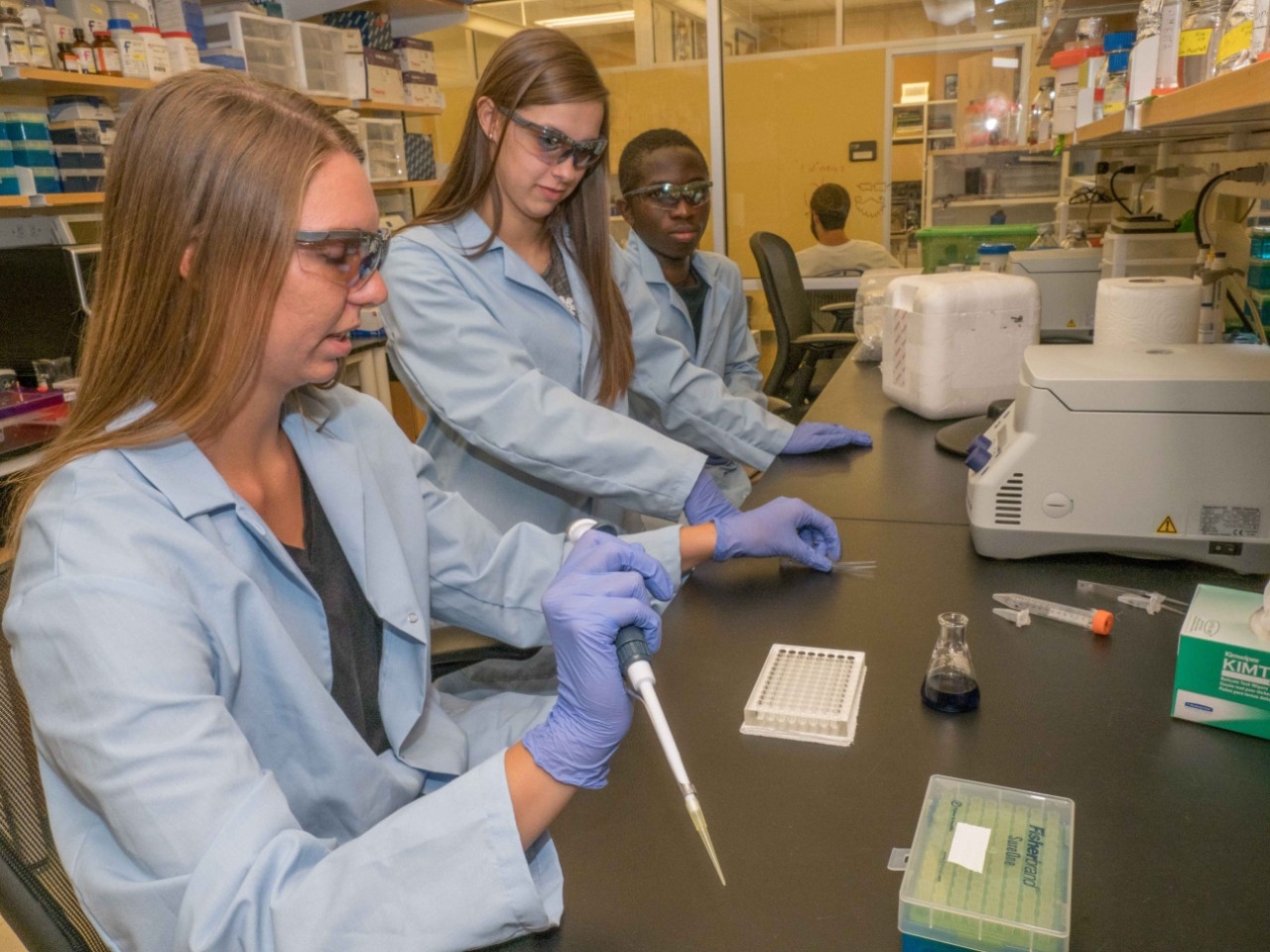 Anyone who has plucked a tick off a pants leg knows they are tough. But UC research is demonstrating just how hardy they are.

A UC study published in 2016 by the journal Ticks and Tick-Borne Diseases suggests that ticks have little problem surviving a typical Ohio winter. Benoit, Rosendale and their student co-authors examined the cold tolerance of the American dog tick by exposing them to temperatures as cold as -9 degrees Fahrenheit. They determined that no ticks survived more than two hours at that temperature. But ticks could withstand temperatures just above 0 degrees and most survived temperatures in the 20s for at least two weeks.

The same group co-authored another study in the Journal of Experimental Biology that found that ticks could withstand long periods of drought, enduring dehydration even when they go without food for as long as 18 weeks.

Some tick species appear to be expanding their range, which means the diseases they carry could be an emerging concern, Rosendale said.

“We expect to see more reported cases of Lyme disease,” he added. “Warmer temperatures and milder winters are allowing them to survive. We’re seeing a change in population distribution and increases in numbers as well.”

Local parks are paying close attention to the UC research. As part of the permit, UC agreed to share its surveillance findings.

“It is a public health issue. We want to be aware of what we have in our parks – if there are diseases present and how people can protect themselves,” said Zurijanne Carter, natural resources specialist for the Great Parks of Hamilton County.

The park district occasionally gets calls from residents concerned about disease after finding a tick, she said.

“The research UC is doing would go a long way toward knowing more about ticks in Ohio,” Carter said. “It’s similar research in how we monitor mosquito-borne illness.”

Benoit has published research on a variety of parasites, including tsetse flies. He traveled to Antarctica this year to study a different kind of arthropod, mites.

But ticks abide even there, in one of the most hostile and remote parts of the planet. They live off – what else? – penguins. 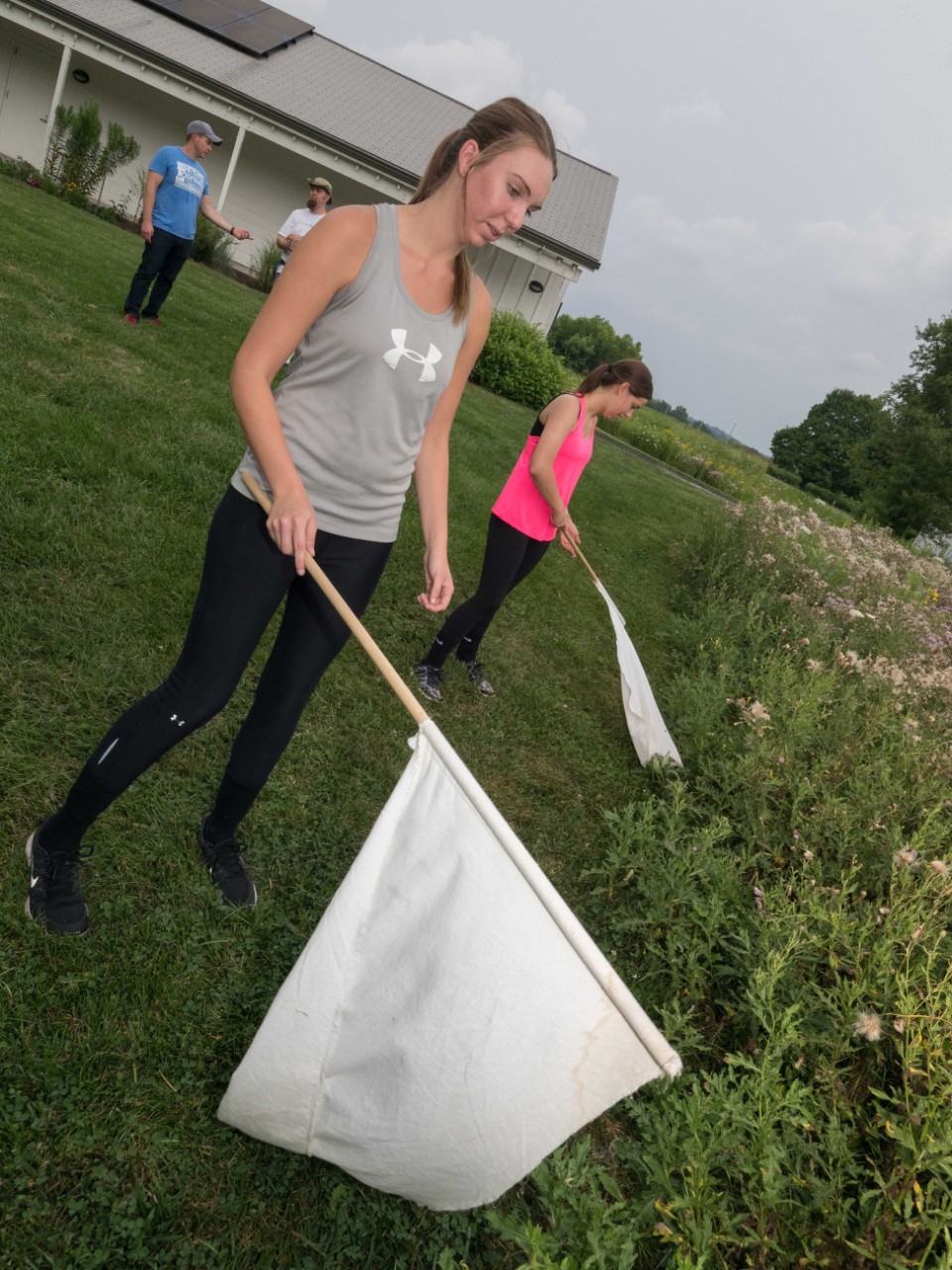 Students use fleece flags to collect ticks at the UC Center for Field Studies. 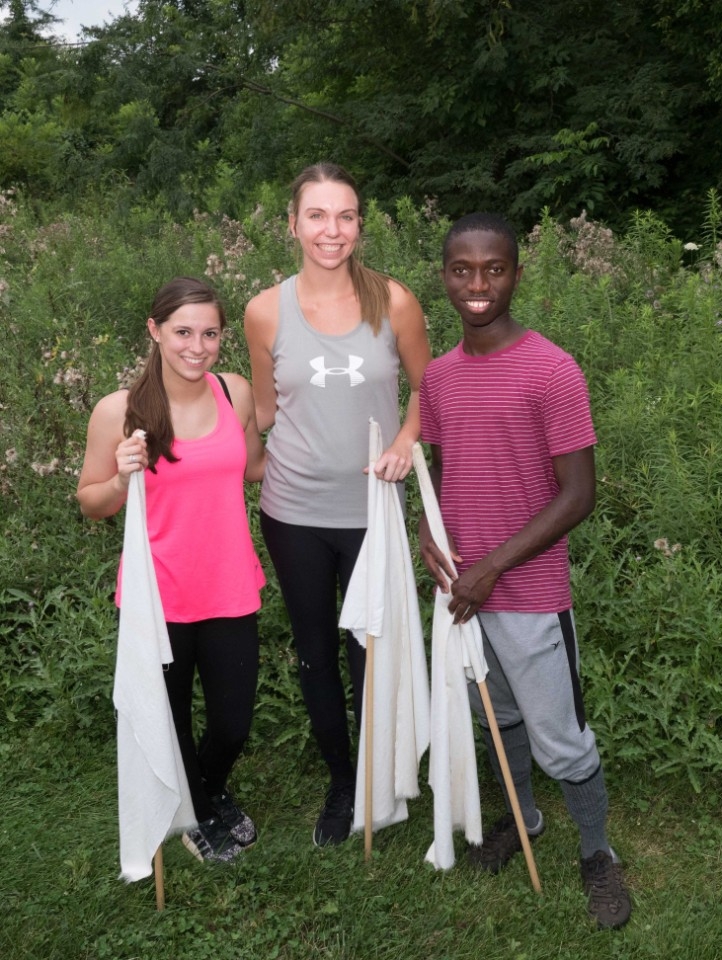 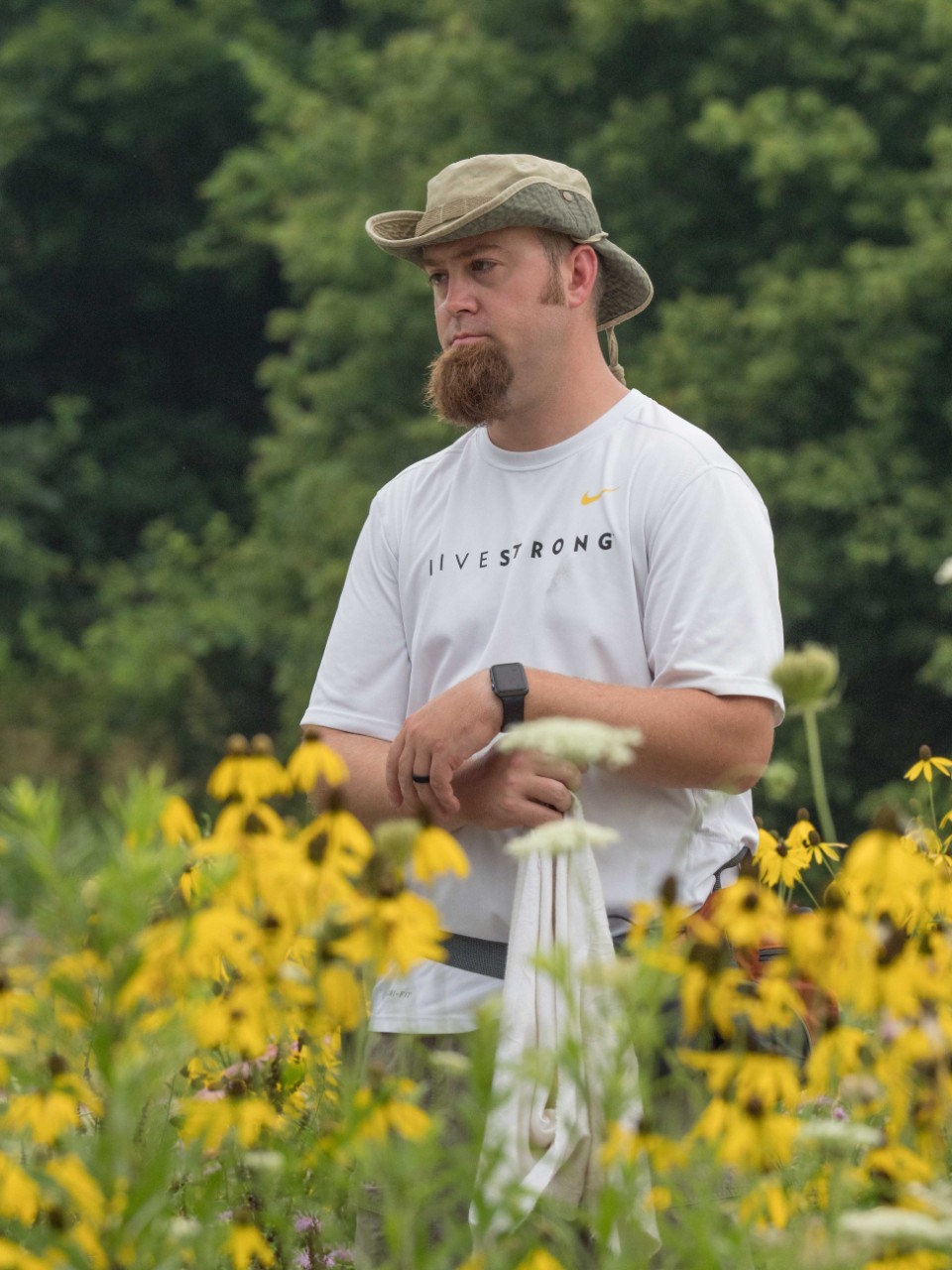