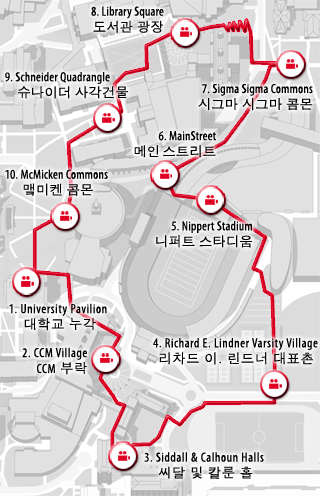 Experience UC for yourself

Not a prospective student?

For UC, Varsity Village means a complete renovation, redesign, and expansion of our athletic and recreational facilities and venues.

Sheakley Lawn is an open green space available for anyone from UC to use at any time.

Marge Schott Stadium, which opened in 2004, is named in honor of the well-known Cincinnati philanthropist who held controlling interest in the Cincinnati Reds from 1985 to 1999.

The Lindner Center is a home for, and a tribute to, UC Athletics. This eight-story structure houses offices, locker rooms, and reception and meeting space for each of UC’s sports teams. Exemplifying UC’s signature architecture is the four-story trophy case. Other facilities in the Lindner Center include University Health Services, our ticket office, and a Hall of Fame.

Gettler Stadium is home to both the University of Cincinnati men’s and women’s soccer teams and the outdoor track teams. The renovated facility features an official-size soccer field with FieldTurf Pro playing surface and an eight-lane, 400-meter track.

This video tour was produced entirely by UC students.