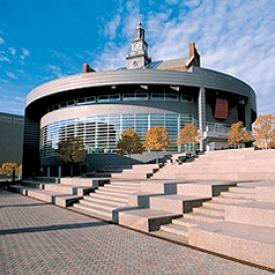 Views such as this of the remade Tangeman University Center led to the University of Cincinnati's inclusion on Forbes Magazine's list of the world's most beautiful campuses. Photo/Bob Flischel

The University of Cincinnati has proven it doesn't need ivy-covered brick walls to be considered among the world's most-attractive campuses.

To arrive at the list, Forbes editors asked a panel of architects and campus designers to nominate their picks for the best-looking campuses in the world.

"Architecture students at UC need only step outside the classroom to observe some of the more cunning modern architecture of their day. Kevin Lippert, publisher of the Princeton Architectural Press, says the school has positioned itself for the 21st century with a wholly renovated campus. Its master plan showcases major architectural works by Michael Graves, Peter Eisenman and Frank Gehry, among others."

The distinction further justifies UC's decades-long renewal through the Campus Master Plan, a $1.2 billion investment, now seen as one of the keys to record student applicants.