Ru-El Sailor walks out of the Cuyahoga County Courthouse with his family on Wednesday after spending 15 years in prison for a murder he did not commit.

A Cleveland man convicted of murder was freed from prison with help from the Ohio Innocence Project at UC's College of Law. The case marked the 26th defendant whose wrongful conviction was overturned with the help of UC.

CLEVELAND — An Ohio man who served 15 years in prison for a murder committed by his best friend walked free Wednesday with help from University of Cincinnati law professors.

The Ohio Innocence Project, part of the UC College of Law's Lois and Richard Rosenthal Institute for Justice, investigated the 2002 murder that landed Ru-El Sailor in state prison for a term of 25 years to life.

Sailor, 38, was convicted of aggravated murder in the Nov. 17, 2002, shooting death of Cleveland resident Omar Clark. At his 2003 trial, Sailor testified that he spent the entire night of the shooting with his best friend, Cordell Hubbard, who also was convicted of murdering Clark.

As part of his agreement with Cuyahoga County prosecutors, Sailor pleaded guilty Wednesday to new charges of perjury and obstruction of justice for lying in court 15 years ago. He was sentenced to 10 years, time served.

Cuyahoga County Common Pleas Court Judge Nancy McDonnell, the judge in Sailor’s 2003 trial, chastised him for lying both to her and the court years ago. Then she uttered the words his family had come to hear: “You’re ordered released.”

Sailor smiled at his daughters and hugged his defense lawyer, Kimberly Kendall Corral, and UC Law professor Jennifer Bergeron, who investigated his case as part of the Ohio Innocence Project.

The case represented the 26th defendant who was freed with help from UC’s College of Law. 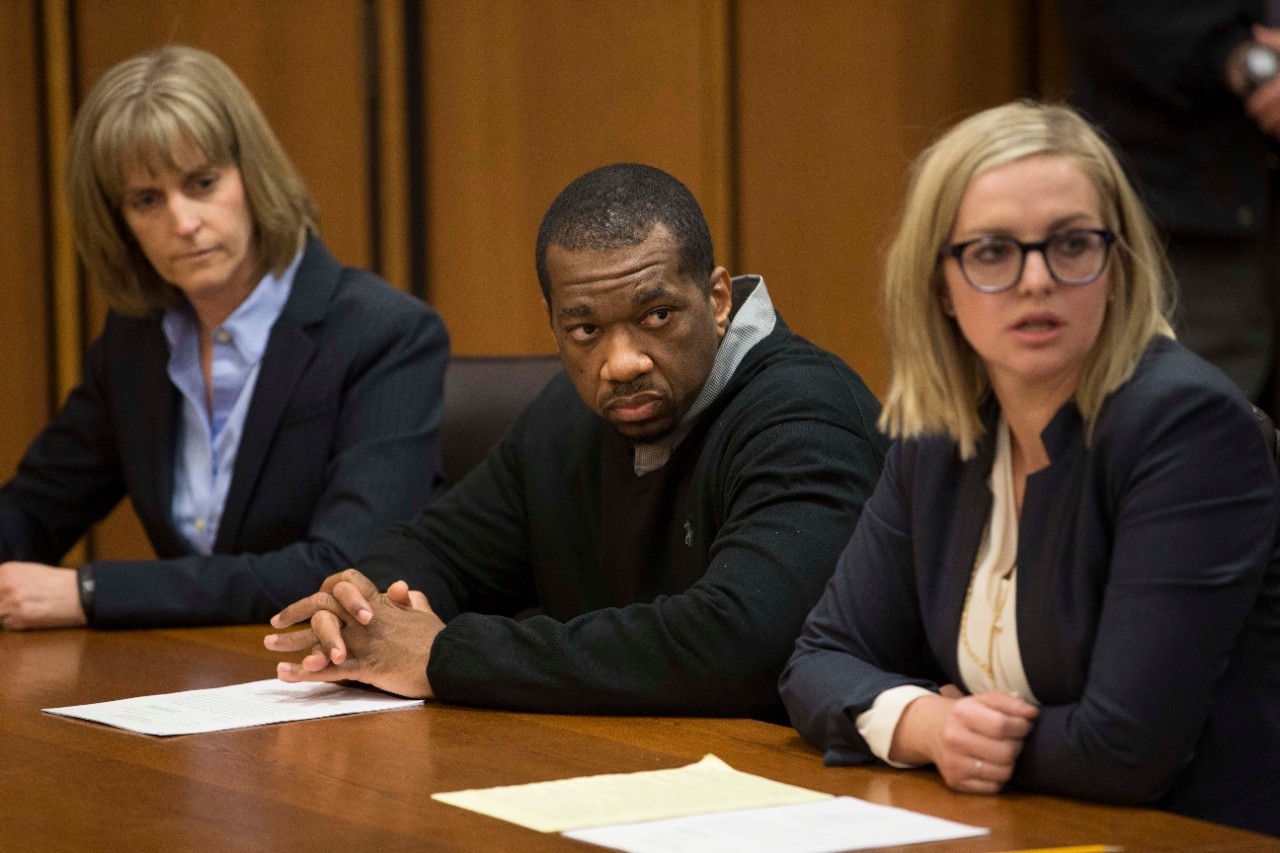 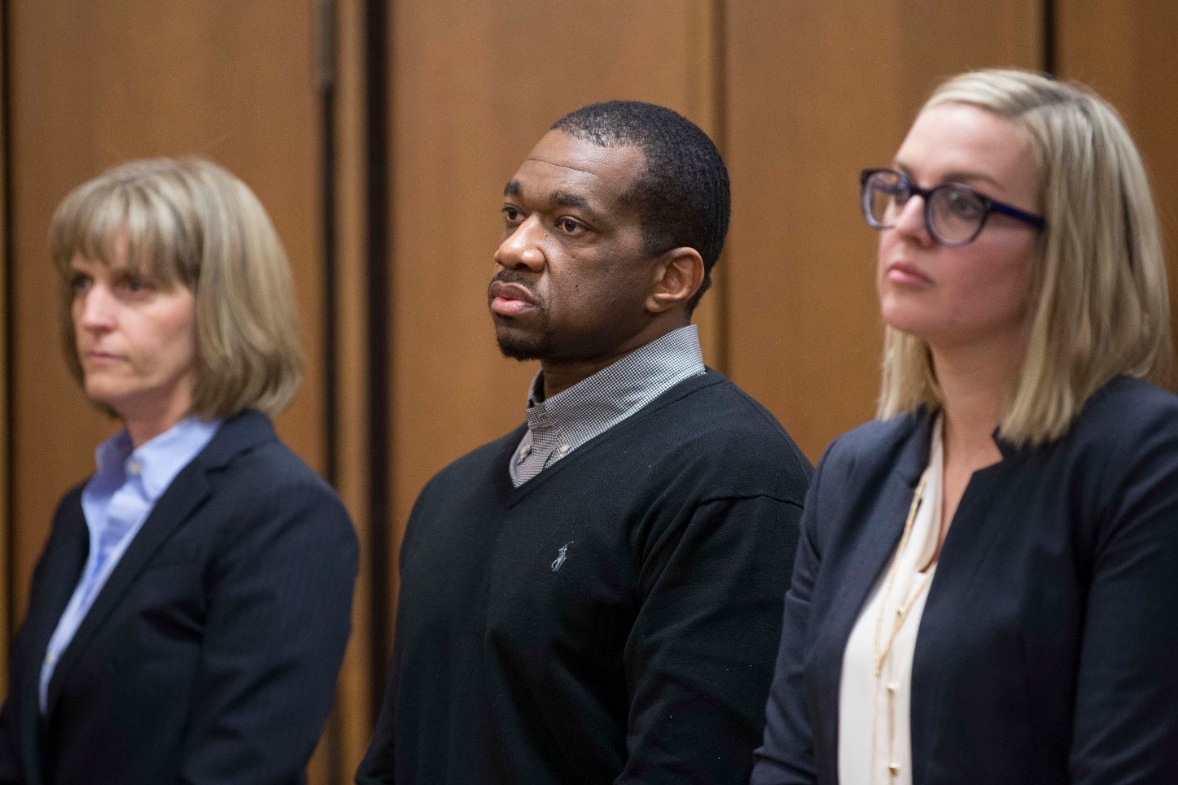 “It was clear he wasn’t guilty of murder,” Bergeron said after the hearing. “We knew the case would be a challenge. There was no DNA and the case relied heavily on witness testimony.”

Sailor was arrested in 2003 along with Hubbard and Hubbard’s sister, Nichole Hubbard. All three were convicted at trial of aggravated murder, allegedly over a $10 debt.

In court papers, prosecutors said a friend of Clark’s, Lamar Williams, borrowed $20 from Nichole Hubbard to buy a cigarette laced with PCP. Williams repaid her $10 but would not pay the rest because they shared the cigarette. Nichole Hubbard phoned Cordell Hubbard, who arrived a few minutes later and confronted Williams and Clark.

Williams fled on foot and told police he heard gunshots and was struck in the lower torso. When he returned, he found Clark lying prone in the street. Clark had been shot 11 times and died shortly after at a nearby hospital.

After the jury’s guilty verdict, Cordell Hubbard filed a sworn affidavit stating that Sailor was not present when Clark was shot. 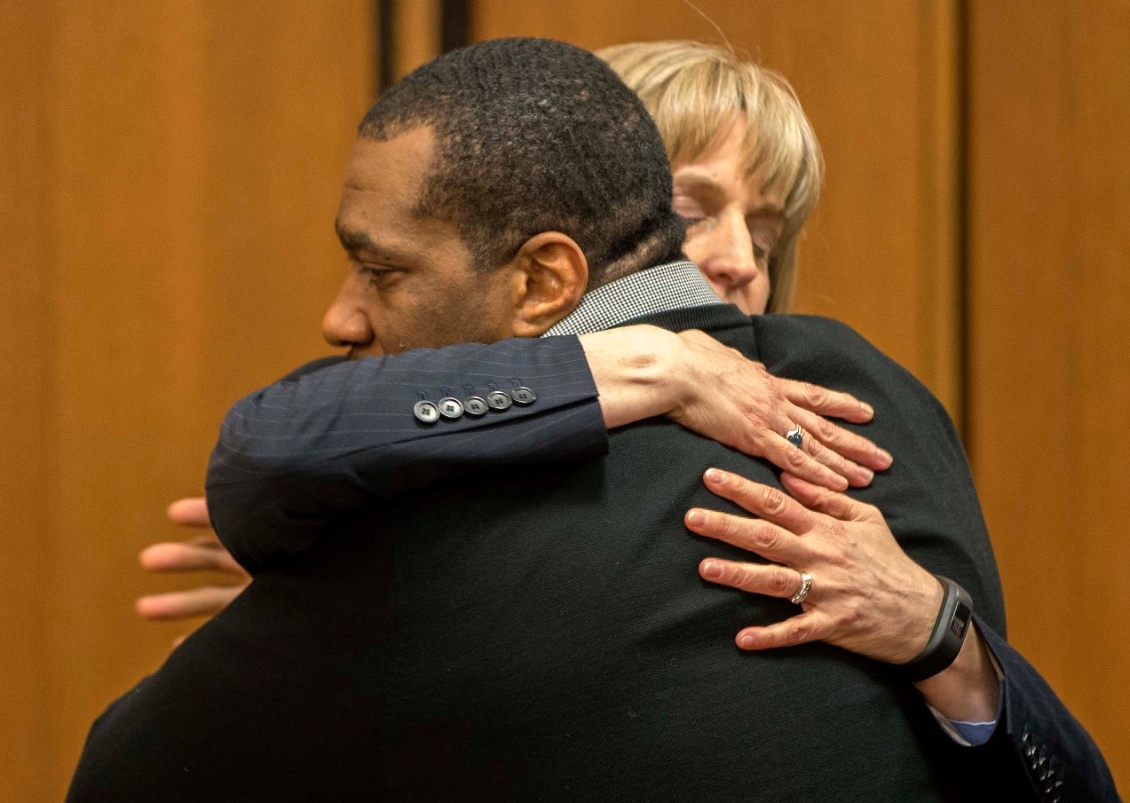 Sailor lost his appeal but asked Cuyahoga County’s Conviction Integrity Unit to reconsider his case. The county Prosecutor's Office launched the unit in 2016 to investigate cases where convicted defendants maintain their innocence.

Williams in 2002 told police that Sailor was with Cordell Hubbard at the time of the shooting. But Williams last year told investigators re-examining the case that he only testified Sailor was there because a trusted friend had told him as much. Williams also admitted to prosecutors that he was under the influence of alcohol and PCP that night and did not get a clear look at the suspected shooter.

Another witness, William Sizemore, told investigators re-examining the case in 2017 that he saw Cordell Hubbard shoot Clark and Williams. Sizemore told prosecutors that Sailor was not present at the shooting. According to court papers, Sizemore also told Clark’s family that Sailor was not responsible for Omar Clark’s death.

In emotional testimony Wednesday, the victim’s brother, Umar Clark, said he carried the knowledge of Sailor’s innocence for years before he decided to act.

Prosecutors asked the judge to vacate the 2003 conviction.

“Consequently, the Cuyahoga County Prosecutor’s Office believes that the original theory of this case as presented at trial cannot be upheld and that Ru-El Sailor’s convictions cannot withstand scrutiny,” the Prosecutor’s Office said in its motion to vacate. 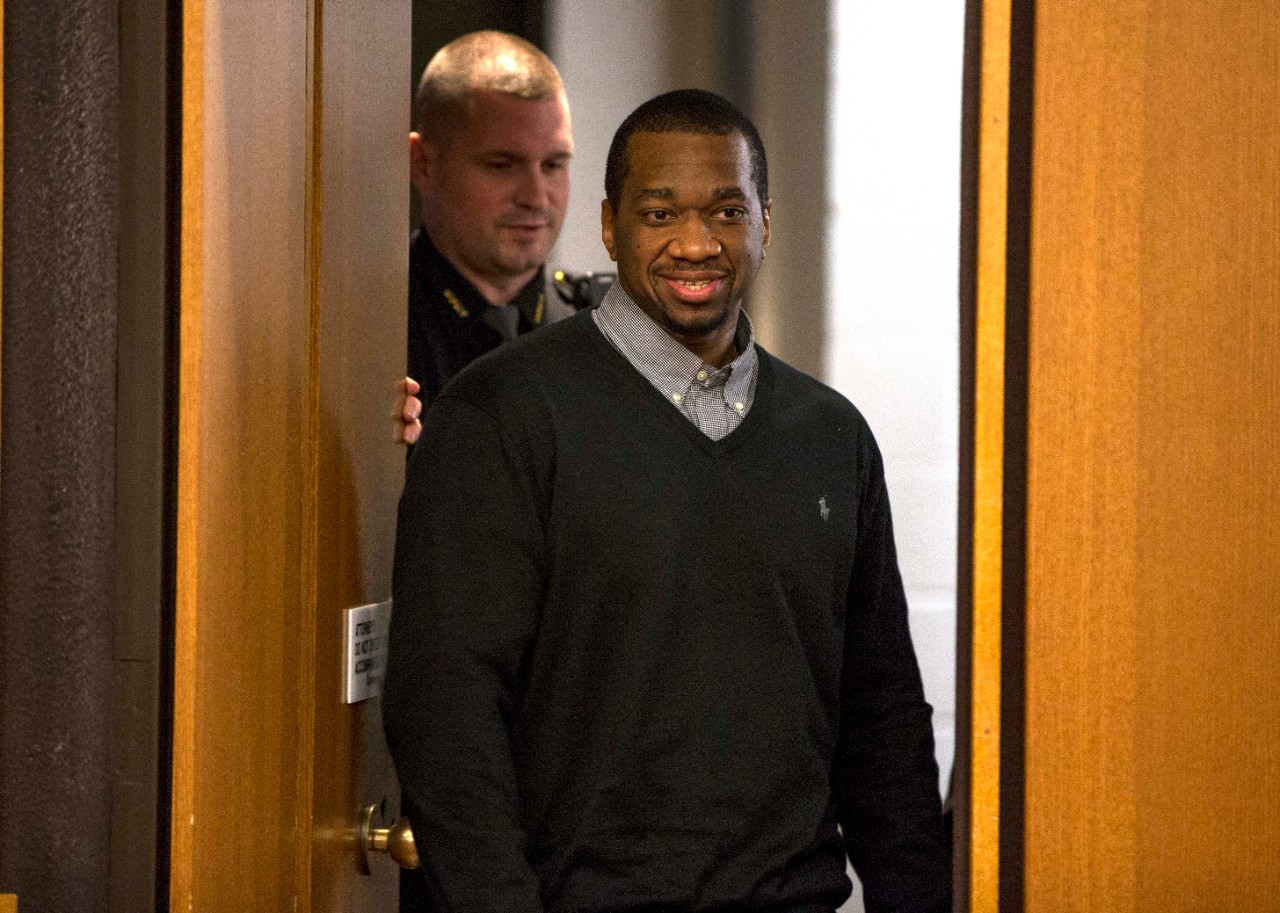 Ru-El Sailor smiles at family Wednesday as he enters a Cuyahoga County courtroom to hear whether his 2003 conviction will be overturned.

On Wednesday, Sailor apologized to Clark’s family and to the court for lying.

“I figured since I was innocent, nothing else mattered. But someone lost their life. A father and a brother,” Sailor said.

A large group of friends and family attended Wednesday's hearing.

When he was released from custody, Sailor greeted supporters in the courthouse lobby wearing an Ohio Innocence Project sweatshirt and baseball cap.

Sailor thanked his legal team, particularly the Ohio Innocence Project. Investigators were able to track down witnesses who helped make a persuasive case to prosecutors for Sailor’s release.

“They never gave up on me. They told me they’d fight to the end,” Sailor said.

“We can never repay our debt to the Ohio Innocence Project because they gave us back our lives.”

‒ Evin King, who was freed from prison in 2017 with help from UC law professors

Sailor's friends and family had arranged for a party bus to pick them up outside the courthouse. Sailor climbed aboard and had his first family dinner in 15 years at a local steakhouse.

Sailor’s mother, Bernatte Brown, said she was too nervous to sleep the night before the hearing.She and her son hugged tightly under a giant monument of a stamp emblazoned with the letters FREE a few blocks from the courthouse, where Sailor and his lawyers went to take photos to commemorate his release.

Brown said she was planning a special Easter dinner complete with her son’s favorites: honey-baked ham, sweet potatoes and macaroni and cheese.

“I thought there has to be something we can do,” she said. “We contacted as many people as we could. The Innocence Project worked so hard to investigate everything so thoroughly. We’re so grateful.”

Evin King, 61, of Ravenna, Ohio, was exonerated last year after spending 23 years in state prison for a murder he did not commit.

King on Wednesday returned to the Cuyahoga County Courthouse where he celebrated his emotional release nearly a year ago. King recalled the tumultuous feelings he experienced that day: anxiety, fear, hope and ultimately triumph.

“Ru-El is going through a million emotions now. That’s a feeling you never forget, to smell free air again,” King said. “For 23 years I walked in a circle the size of this courthouse and now I was free.”

King said he returned to the courthouse Wednesday to support Sailor and the UC lawyers who helped free them both.

“We can never repay our debt to the Ohio Innocence Project because they gave us back our lives,” King said. 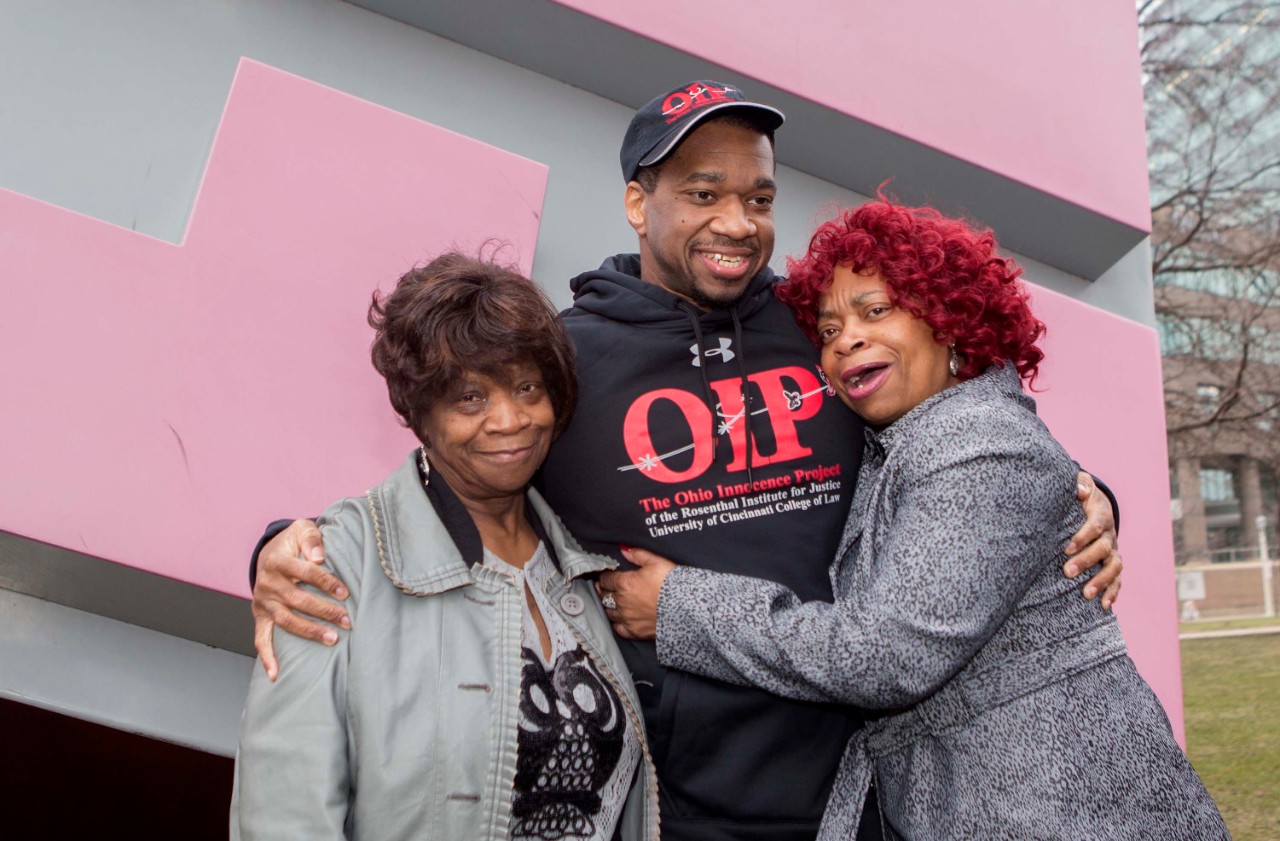 Ru-El Sailor gets a hug from family members Wednesday after his release from state prison where he served 15 years for a murder he did not commit. 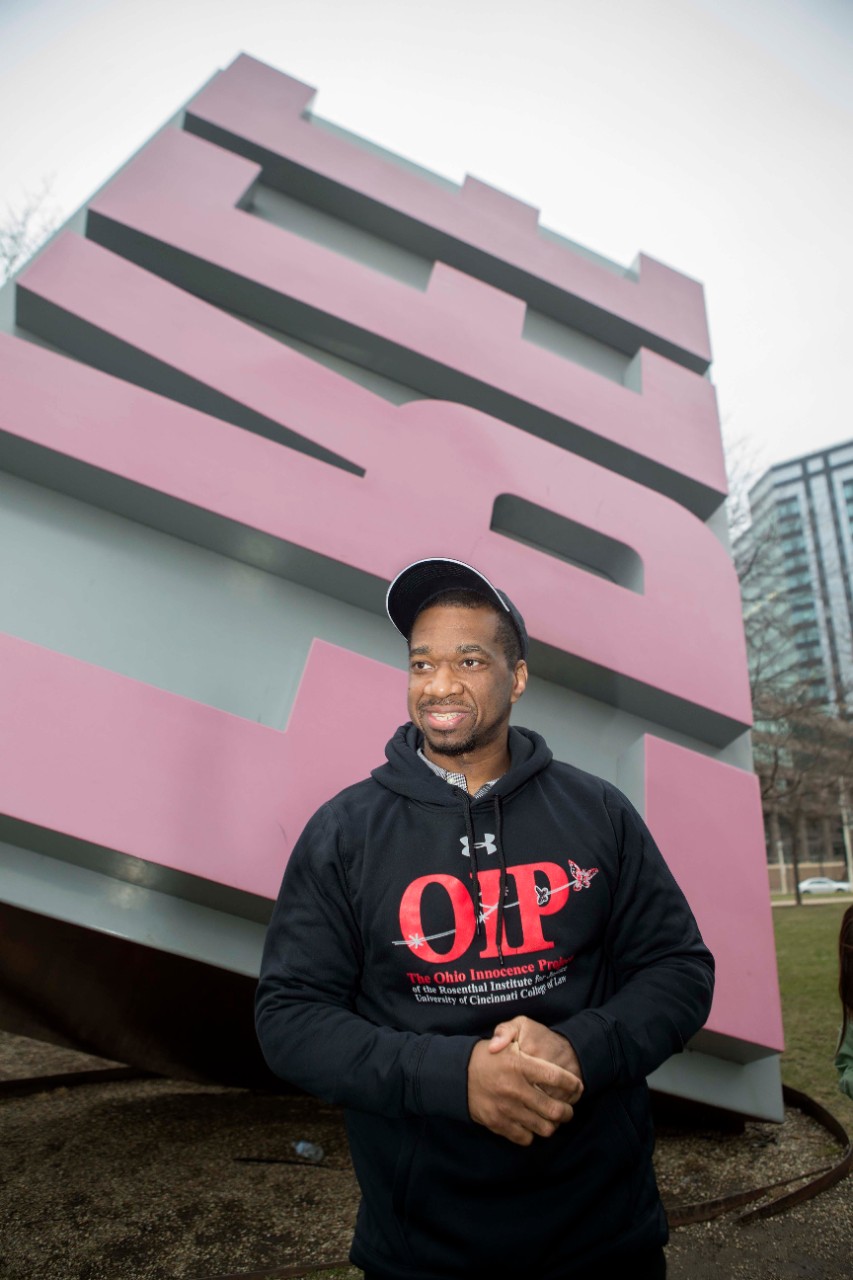 Ru-El Sailor poses in front of Cleveland's iconic Free Stamp after his release from state prison Wednesday. Sailor was the 26th wrongfully convicted defendant released with help from UC's College of Law. 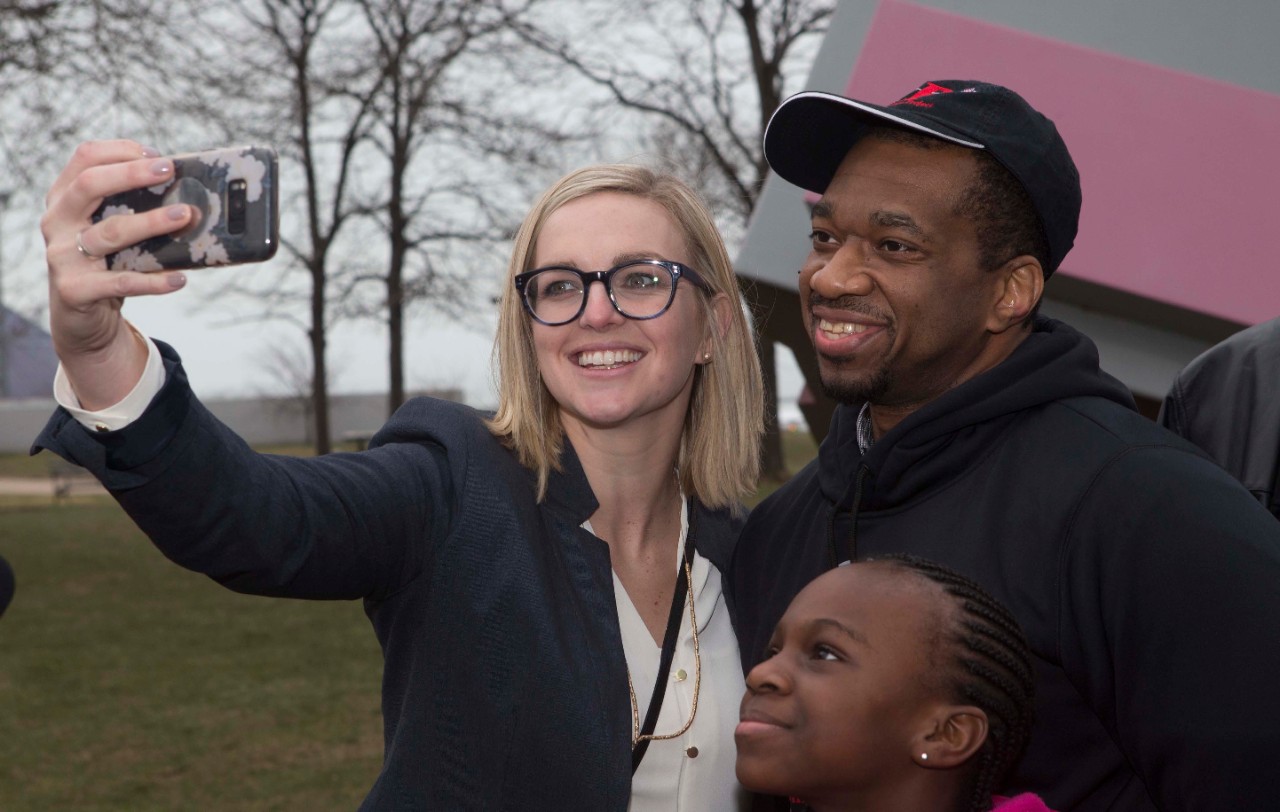 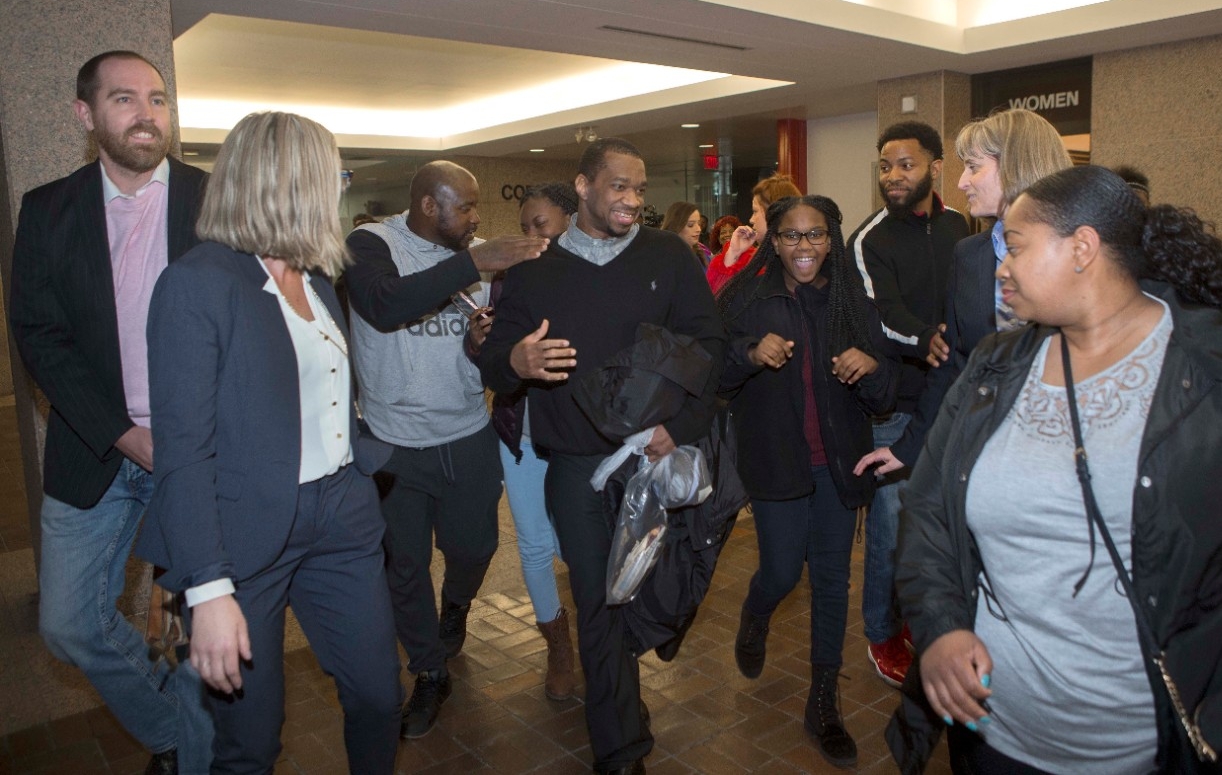 Ru-El Sailor leaves the Cuyahoga County Courthouse with family and friends on Wednesday after his 2003 conviction was vacated.

Ohio Innocence Project in the news

Man wrongly convicted of murder to head to Disney, see Browns game after release from prison