The discovery also reveals the unique binocular vision of the first ancient marine reptile of its kind to be found in Japan.

An international research partnership is revealing the first mosasaur fossil of its kind to be discovered in Japan. Not only does the 72-million-year-old marine reptile fossil fill a biogeographical gap between the Middle East and the eastern Pacific, but also it holds new revelations because of its superior preservation.

This unique swimming lizard, now believed to have hunted on glowing fish and squids at night, is detailed in an article led by Takuya Konishi, a University of Cincinnati assistant professor of biological sciences. The article is published in the Journal of Systematic Palaeontology, a publication of the Natural History Museum in London.

The fossil marine reptile, Phosphorosaurus ponpetelegans (a phosphorus lizard from an elegant creek), existed during the Late Cretaceous Period just before the last of the dinosaurs such as Tyrannosaurus and Triceratops. Compared with some of their mosasaur cousins that could grow as large as 40 feet, this species is relatively small, about 3 meters, or 10 feet long. This unique discovery in a creek in the town of Mukawa in northern Japan reveals that they were able to colonize throughout the northern hemisphere. 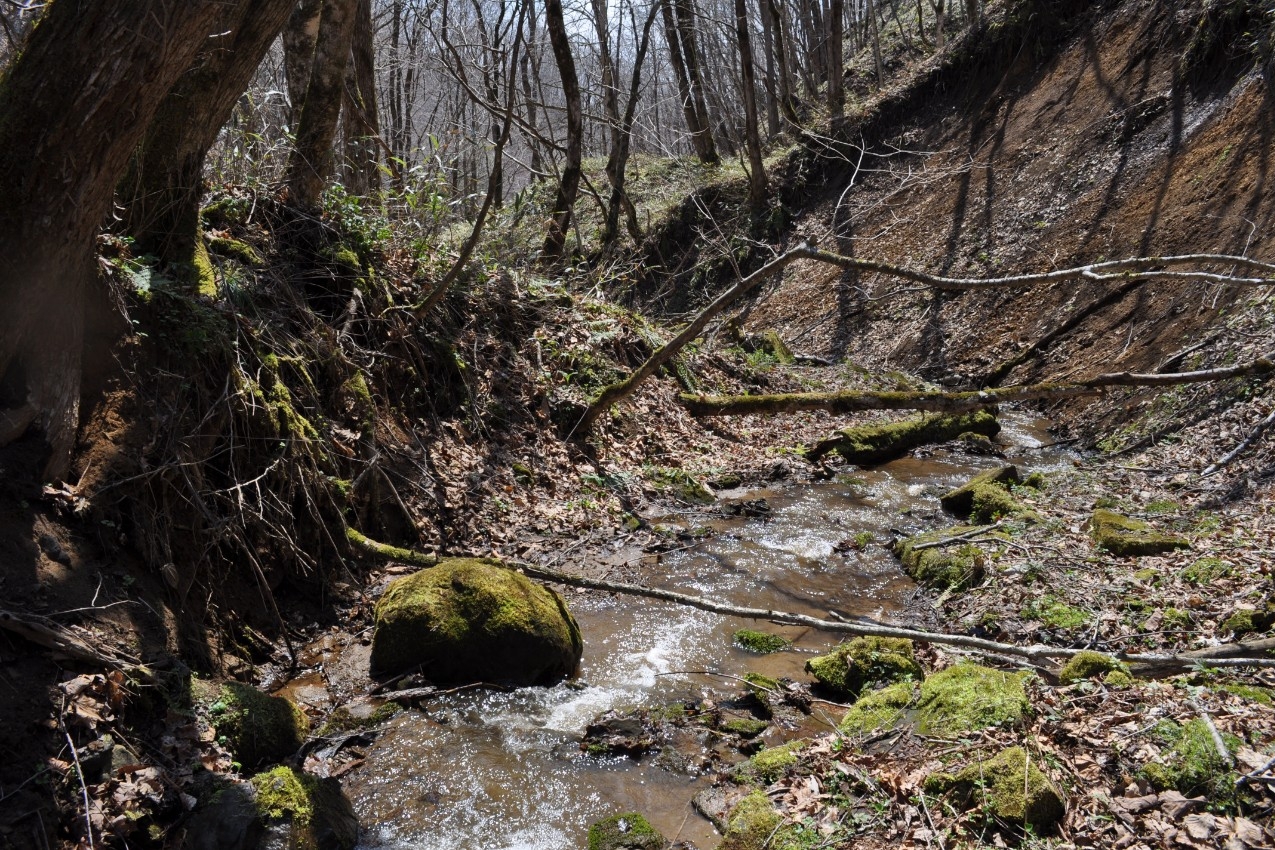 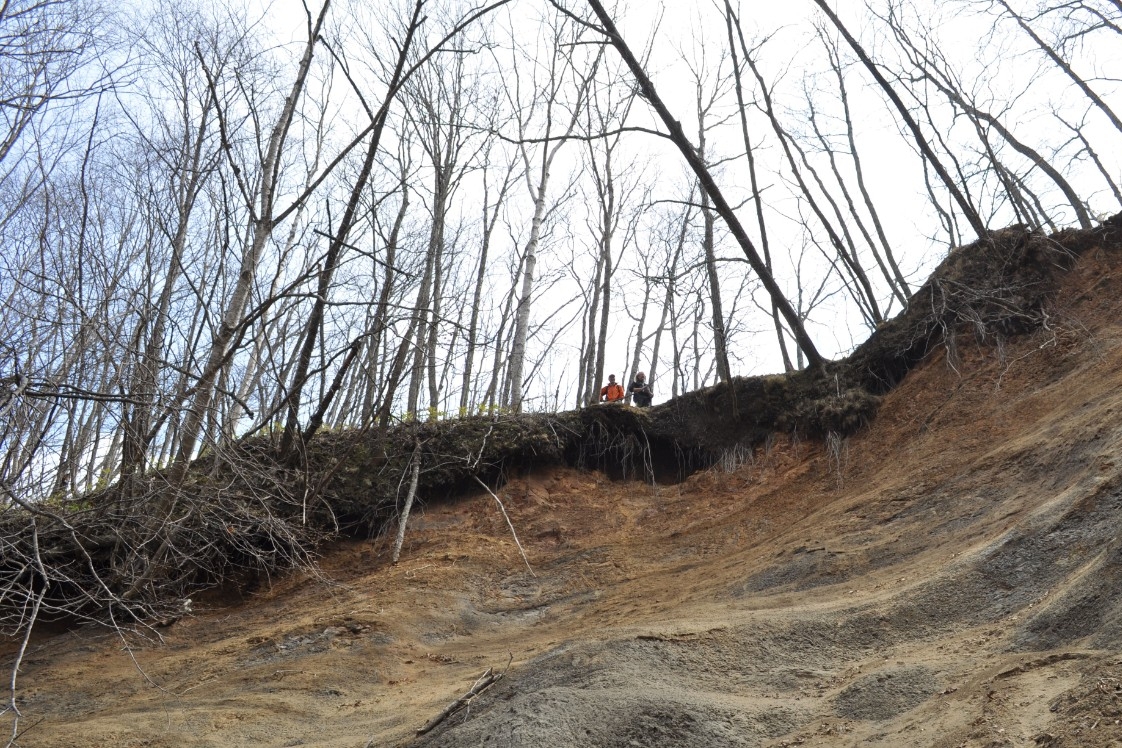 “Previous discoveries of this particular rare mosasaur have occurred along the East Coast of North America, the Pacific Coast of North America, Europe and North Africa, but this is the first to fill the gap between the Middle East and the Eastern Pacific,” explains Konishi, a member of the research team that also was represented by the Royal Tyrrell Museum of Palaeontology (Canada), University of Alberta, Brandon University, Hobetsu Museum (Japan), Fukuoka University and the town of Mukawa.

Because the fossil was so well preserved, the creature revealed it had binocular vision — its eyes were on the front of the face, providing depth perception. This was a new discovery for this fossil species. The discovery reveals that the eye structure of these smaller mosasaurs was different from their larger cousins, whose eyes were on either side of their large heads, such as the eye structure of a horse. The eyes and heads of the larger mosasaurs were shaped to enhance streamlined swimming after prey that included fish, turtles and even small mosasaurs. 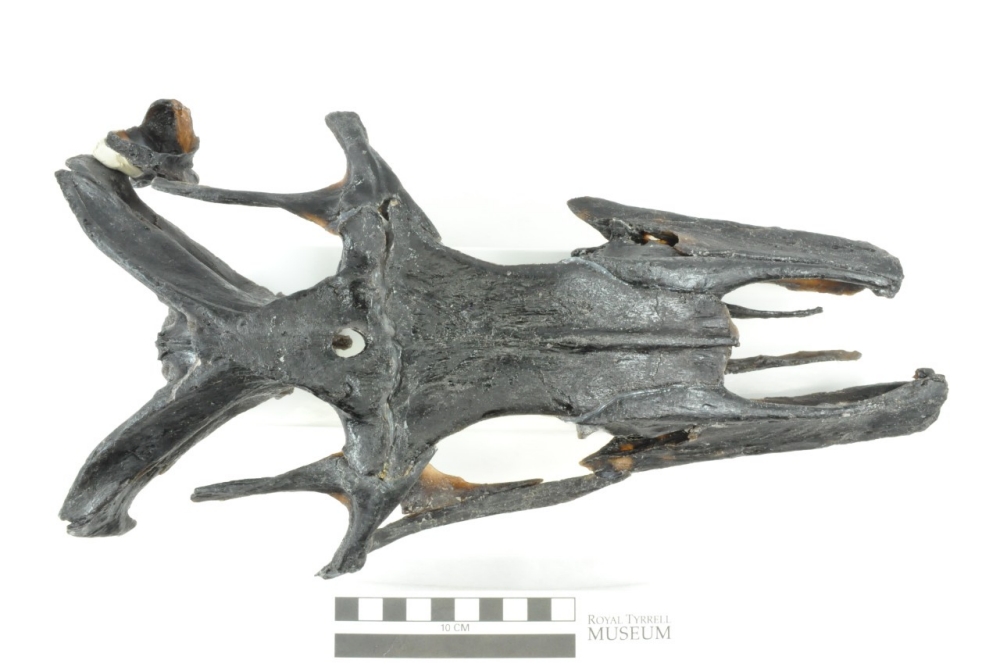 “The forward-facing eyes on Phosphorosaurus provide depth perception to vision, and it’s common in birds of prey and other predatory mammals that dwell among us today,” says Konishi. “But we knew already that most mosasaurs were pursuit predators based on what we know they preyed upon — swimming animals. Paradoxically, these small mosasaurs like Phosphorosaurus were not as adept swimmers as their larger contemporaries because their flippers and tailfins weren’t as well developed.”

As a result, Konishi says it’s believed these smaller marine reptiles hunted at night, much like the owl does compared with the daytime birds of prey such as eagles. The binocular vision in nocturnal animals doubles the number of photoreceptors to detect light. And, much like owls with their very large eyes to power those light receptors, the smaller mosasaur revealed very large eye sockets.

Also, because fossils of lantern fish and squid-like animals have been found from the Late Cretaceous Period in northern Japan, and because their modern counterparts are bioluminescent, the researchers believe that Phosphorosaurus may have specifically targeted those glowing fish and squids at night while their larger underwater cousins hunted in daytime.

“If this new mosasaur was a sit-and-wait hunter in the darkness of the sea and able to detect the light of these other animals, that would have been the perfect niche to coexist with the more established mosasaurs,” says Konishi. 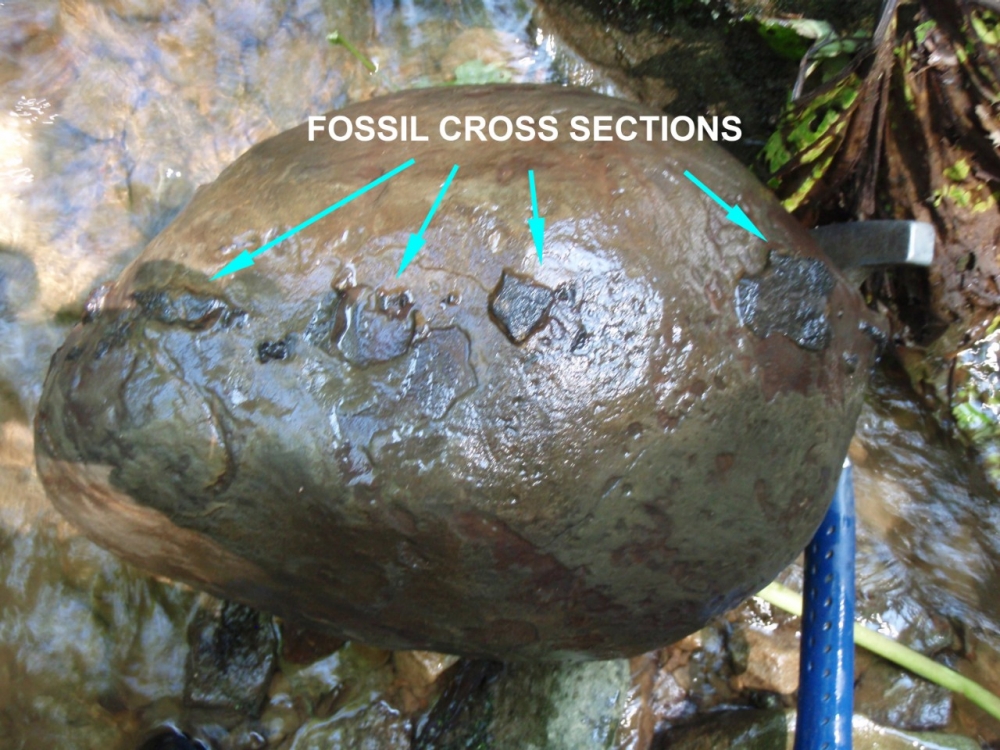 The calcareous nodule that enclosed the fossil.

The fossil, enclosed in a rock matrix, was first discovered in 2009, in a small creek in northern Japan. Revealing what was inside the matrix while protecting the fossil was a painstaking process that took place at the Hobetsu Museum in Mukawa. The calcareous nodule would be dipped at night in a special acid wash, and then carefully rinsed the next day, as the two-year process freed the bones from the matrix. To further protect the fossil, special casts were made of the bones so that the researchers could piece together the remains without damaging the fossil.

“It’s so unusually well-preserved that, upon separating jumbled skull bones from one another, we were able to build a perfect skull with the exception of the anterior third of the snout,” says Konishi. “This is not a virtual reality reconstruction using computer software.  It’s a physical reconstruction that came back to life to show astounding detail and beautiful, undistorted condition.”

Konishi says future research will examine how this new mosasaur fits in the evolutionary family tree of mosasaurs. 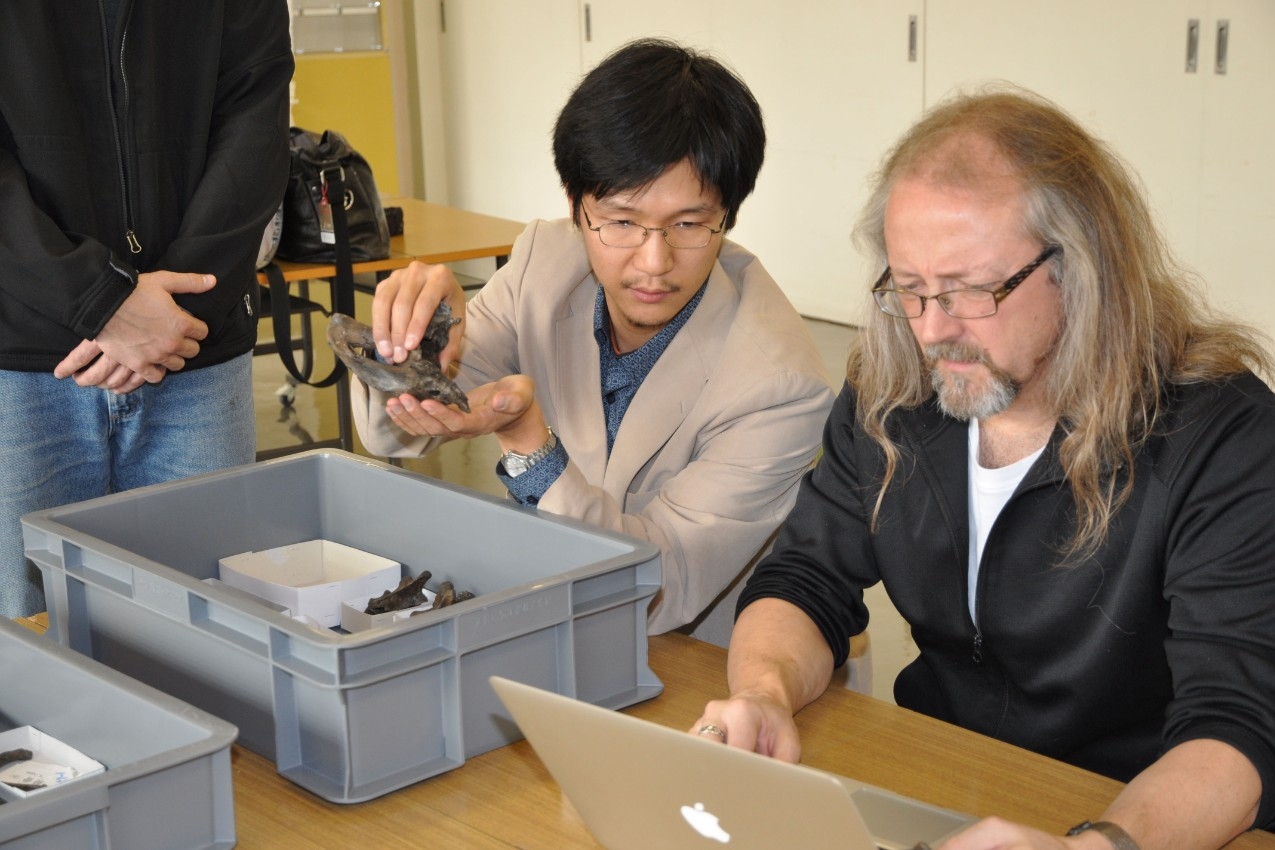 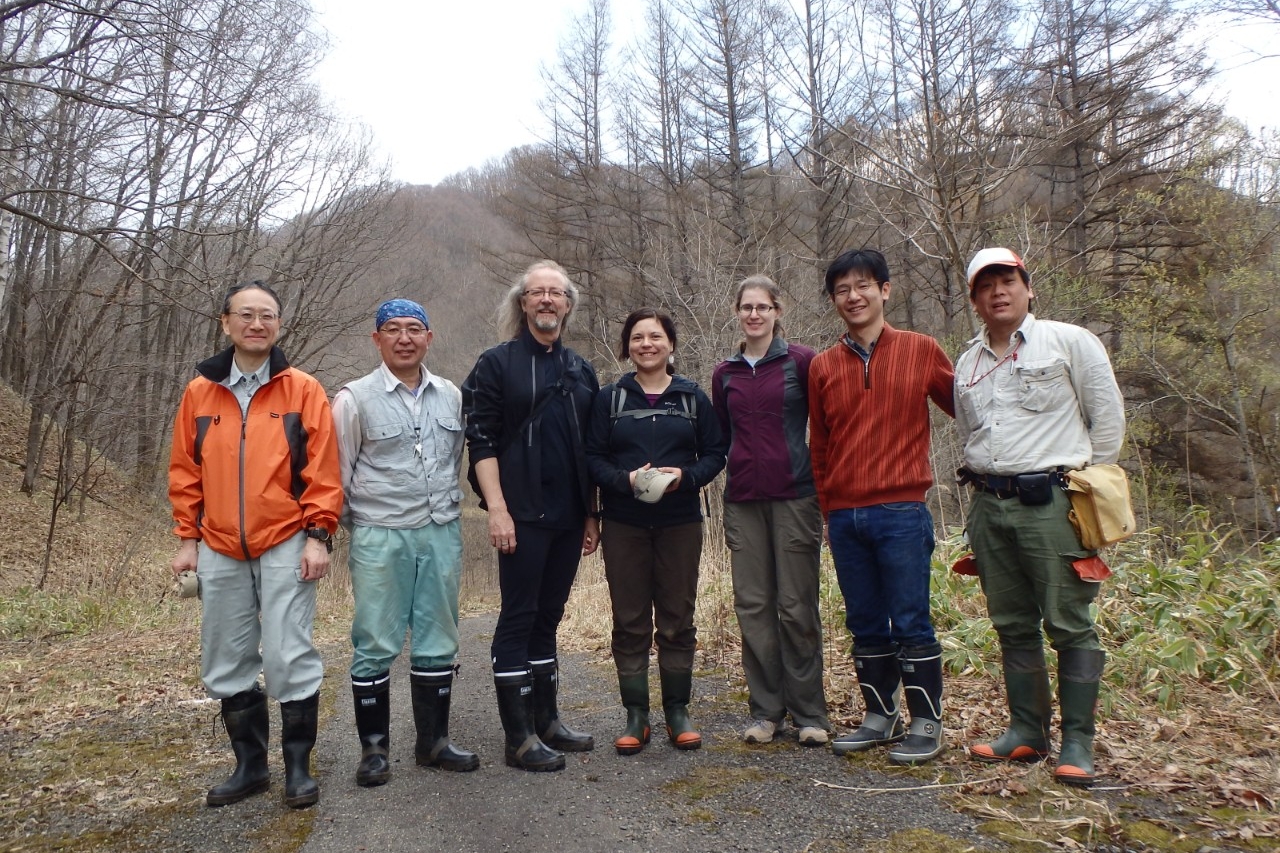 The research was supported by the Japanese town of Mukawa; the Hobetsu Museum in Mukawa; Brandon University; the National Sciences and Engineering Research Council (NSERC) Discovery Grant (23858); an NSERC Accelerator Grant (412275); a Chairs Research Allowance; and funding from the Central Research Institute of Fukuoka University (105008).

The Journal of Systematic Palaeontology

The Journal of Systematic Palaeontology aims to significantly advance the understanding of palaeogeography, palaeobiology, functional morphology, palaeoecology, biostratigraphy or phylogenetic relationships, as well as explore new or poorly understood fossil faunas and floras.

The Department of Biological Sciences at UC

UC’s biological sciences department, housed in the McMicken College of Arts and Sciences (A&S), is dedicated to excellence in research, graduate training, undergraduate education and community engagement. The department’s research is supported by a broad range of grants from federal and private research foundations.