In the bristles of fruit fly antenna, in the eyes of beetles and in the neurons of leeches—that’s where University of Cincinnati scientists are searching for answers to complex questions about how humans and animals perceive the world.

They are part of a weird and often creepy-critter-filled world of sensory research in the McMicken College of Arts and Sciences’ Department of Biological Sciences. Last year, researchers in the department netted more than $5 million in federal funding to continue their investigations.

As bizarrely different as these disparate research efforts are, they are also oddly, wonderfully and sometimes wildly connected. As members of McMicken’s Sensory Biology, Behavior & Evolution Group (SBBE), each of these researchers wants to better understand what happens in brains and bodies when we humans and animals see, when we smell, when we hear, when we taste, when we touch.

They also want to use what they learn to help others. A better grasp of normal sensory development translates into potential for better understanding and management of sensory or neurological malfunctions, they maintain. Studying animal models can help us do that.

Even if it means starting with leeches. 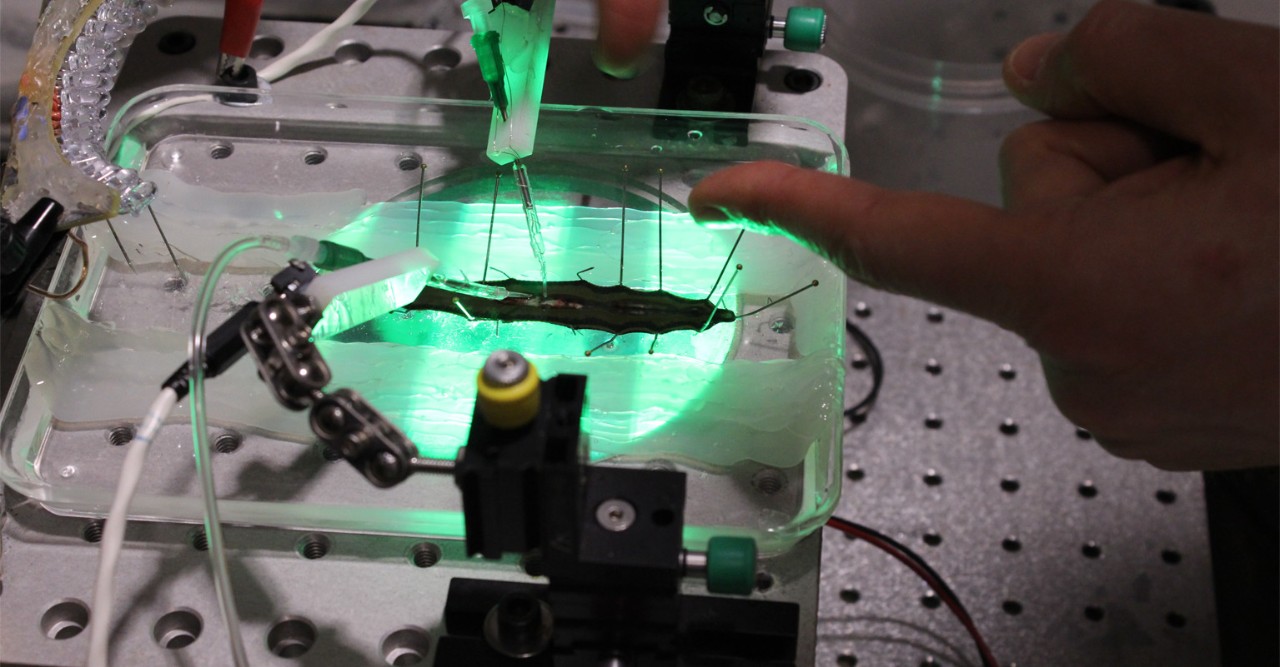 Drawing insights about the human brain

Daniel Wagenaar waxes poetic about leeches. Where we see two inches of a bloody worm splayed open and pinned under a microscope, he sees clues to the mysteries hidden in the human brain.

Wagenaar, an assistant professor of Biological Sciences, studies neurons, those tiny cells that do the brain’s heavy lifting. Neurons, in leeches and in humans, fire messages to each other that trigger whole-body reactions to things as simple as light and sound. Studying neurons in a leech, it turns out, has its advantages.

“It is one of the simplest nervous systems that has really exciting behaviors,” Wagenaar says. To be clear, “exciting” in the world of leeches means behaviors like crawling, swimming and eating.

Wagenaar and his research assistants control sensory input to monitor how leeches respond to light.

He believes that the basic principles he and his research team can learn from leeches —how neurons connect and how the messages they send impact behavior—could apply to much more complicated networks of neurons.

“I like to think of this as a very preliminary study toward what the BRAIN Project is about, trying to understand the relationship between connectivity and function in human brains,” he says. 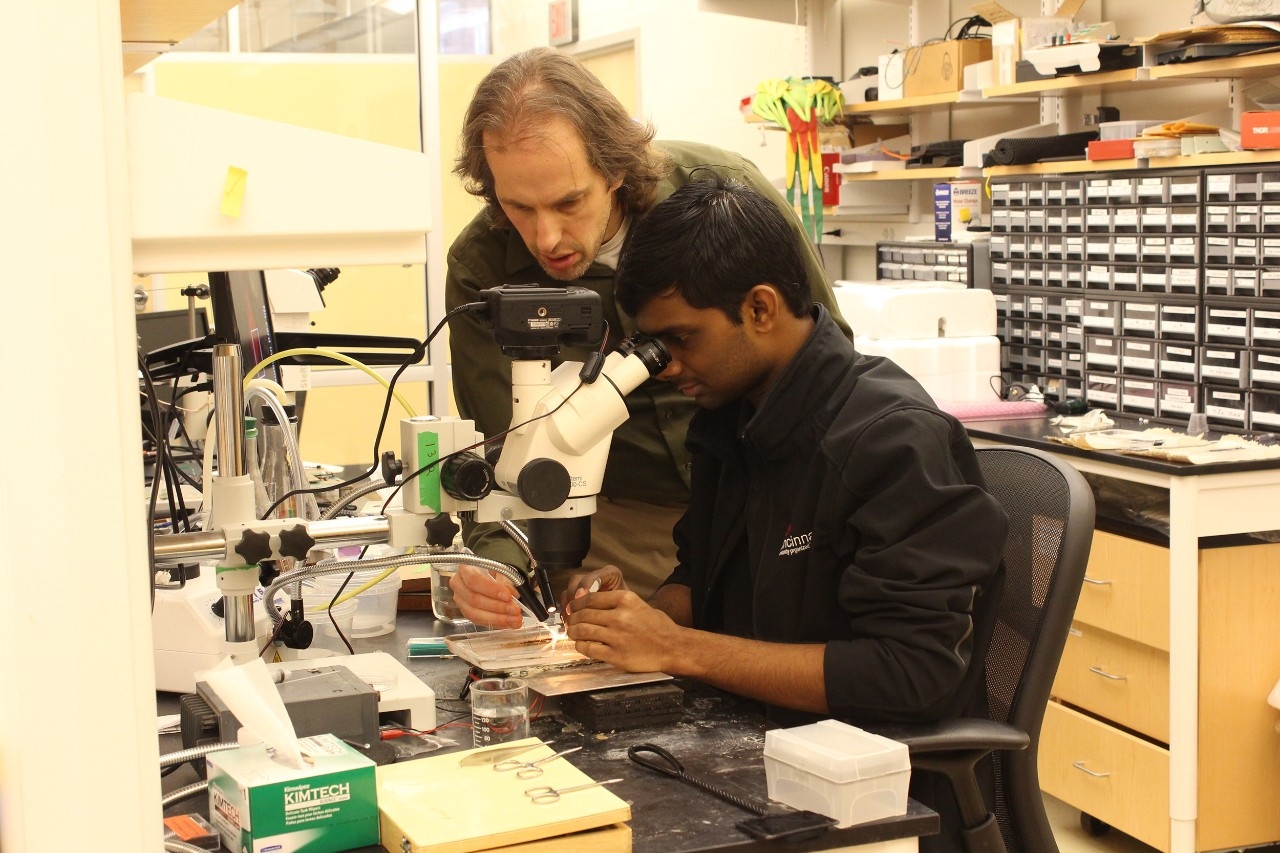 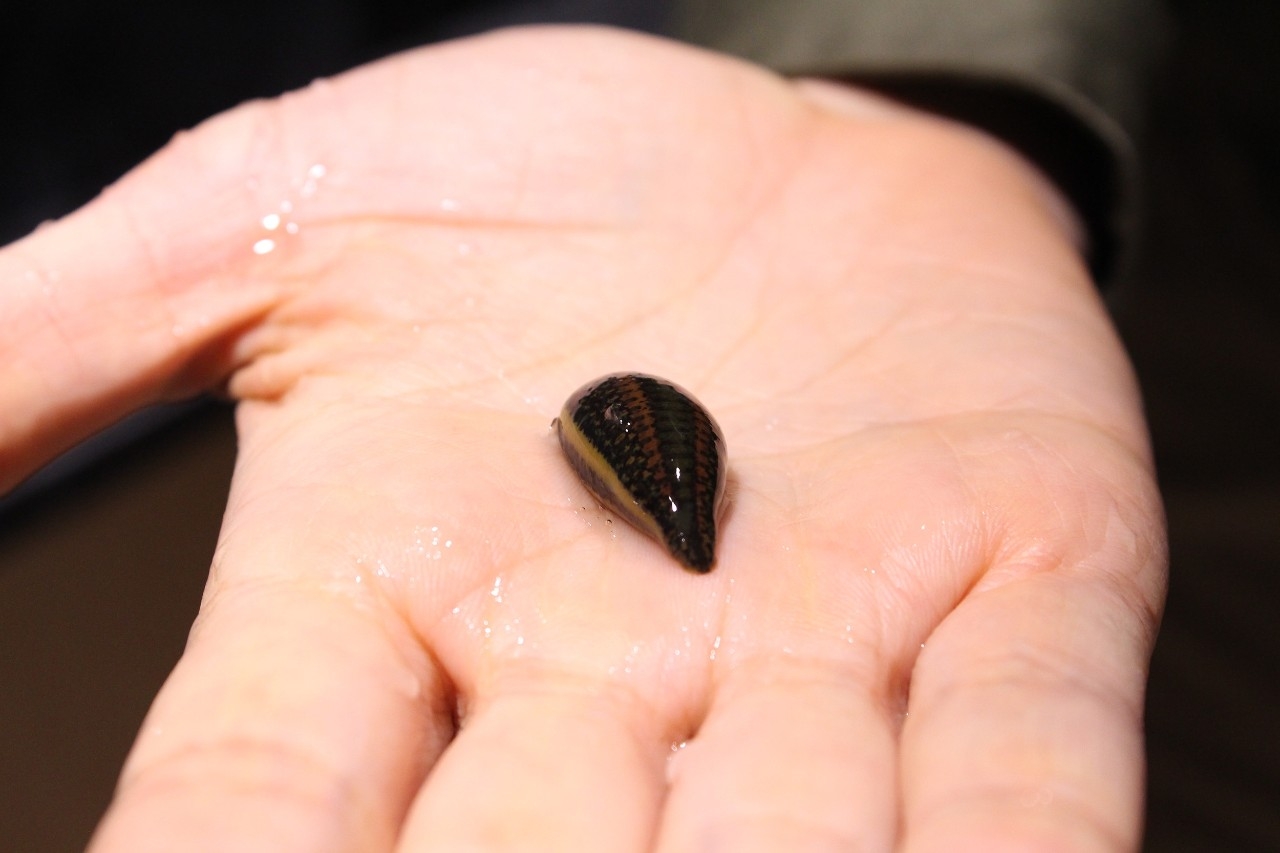 The implications are, quite literally, mind-expanding. If researchers can discover how circuits of neurons regularly respond and connect, for example, they may also be able to pinpoint and address misfires, like brain and behavioral disorders, on a cellular level.

Which leads right back to those slimy leeches. The National Institutes of Health, the research arm of the U.S. Department of Health and Human Services, sees so much promise in Wagenaar’s sensory research that it awarded him more than $1.6 million over five years to keep studying the blood-sucking parasites.

Hearing the smell of success 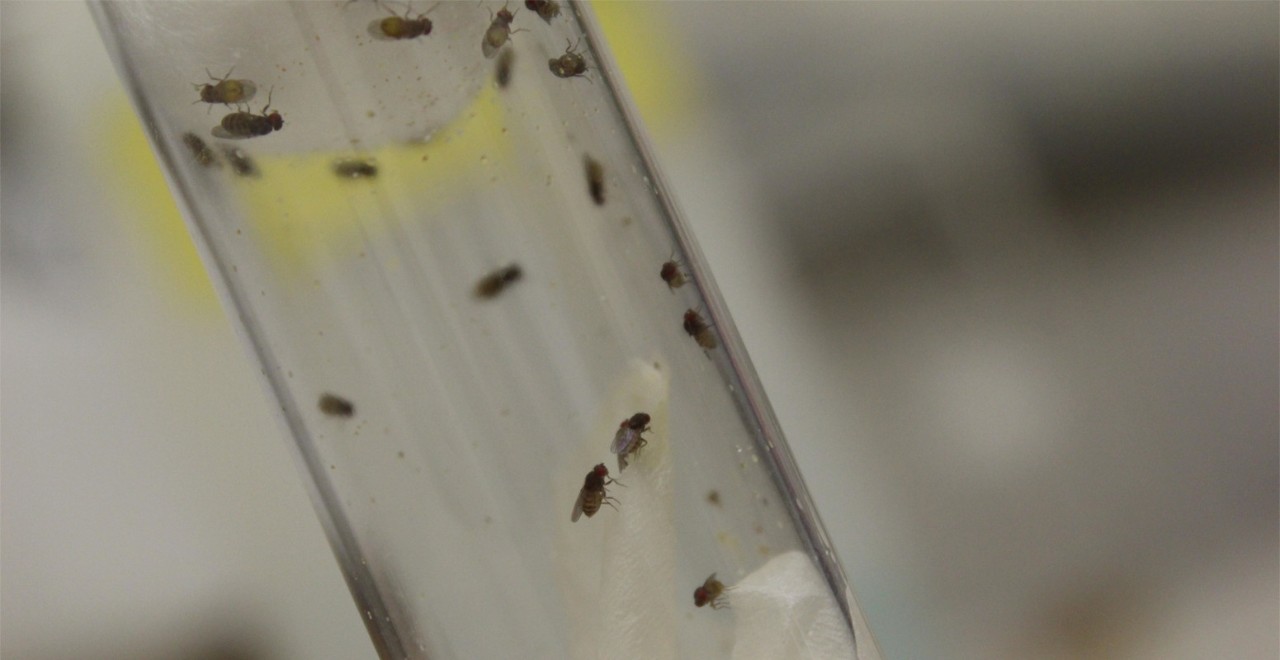 Where you see a tube of tiny flies, UC researchers look for clues into how sensory systems work, adapt and evolve.

Tuning in to the fruit fly

The noise coming from a monitor in Stephanie Rollmann’s Rieveschl workroom sounds like a cross between an underwater white whale and a steady, deep whooooosh.

But when Rollmann, a behavioral geneticist, hears it, she hears something much more than a deep, sonic whoosh. She hears success. And she smiles. So does her research partner, neuroscientist John Layne. So do the students who work as part of their team on an NSF-funded sensory research project.

What’s up with the whoosh? It signals the response of a sensory neuron to a very specific odor by a very specific type of fruit fly that is held in place under a nearby microscope.

The whooshes are recorded, then Rollmann and Layne use 3D imaging to further examine the cells that were triggered by the odor.

They compare the responses of fruit flies from different parts of the world to find out how they locate and thrive on different plants in different environments. Rollmann explains that their findings also illustrate a broader principle: how species adapt to their environments—whether they recoil from one smell or another—and how those different reactions can shape their diets and landscapes that surround them.

UC neuroscientist John Layne explains how researchers study the fruit fly by staining the neurons in the fruit fly's antenna.

“It illustrates the role of sensory cells in the ‘nose’ in the evolution of preferences for different plants and how those cells can potentially play a part in the formation of new species,” says Rollmann, an associate professor in Biological Sciences.

Like leeches, fruit flies are simple creatures. They also have short life spans, so Rollmann, Layne and their students can study hundreds of fruit flies and their sensory systems in months rather than years.

Stephanie Rollmann (second from right) and John Layne (right) help train a new generation of sensory researchers as they study the sensory systems of fruit flies.

John Layne and Stephanie Rollman’s work examining the sense of smell in fruit flies shows that species are continuing to evolve.

Rollmann explains that her lab’s research can have agricultural applications, such as figuring out how pests specialize on (or, in crop-talk, destroy) certain plants and tracking how their sensors change as they adapt to different surroundings. Her work can also provide insights into the impact chemicals have on interactions between organisms—a field of study known as chemical ecology. 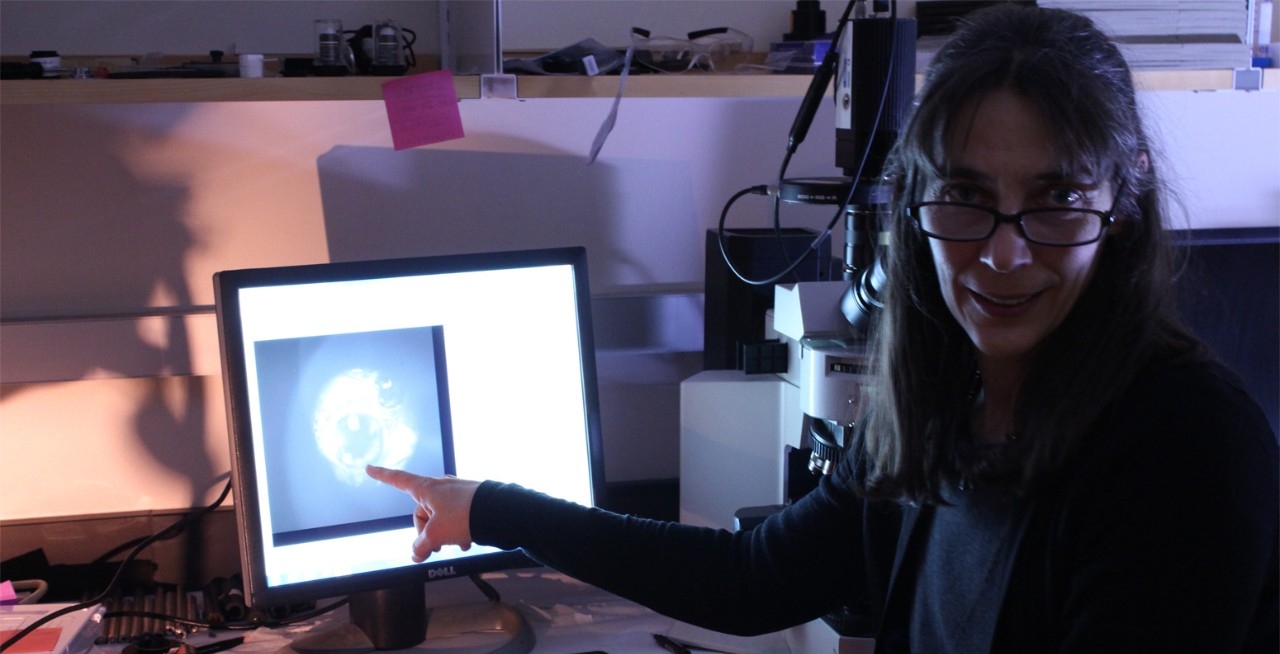 Researcher Elke Buschbeck has been studying insect eyes for more than a decade.

Elke Buschbeck rolls her chair up to a tall, bulky machine that climbs the small, windowless room’s wall. It looks like Frankenscope, an unwieldy microscope with unruly arms. She explains that the custom ophthalmoscope is one of a kind in the world, pieced together after more than a year of trial and error, and that it can measure the eyesight of the world’s smallest insects: spiders, beetles, even fruit flies.

“Nobody else can give a vision test to very little insect eyes,” says the professor and evolutionary biologist.

Buschbeck would know. She’s been studying insect eyes for more than a decade and made news in 2010 when she and post-doctoral researcher Annette Stowasser discovered a new kind of eye. That’s a discovery worth repeating. They identified a new kind of eye—one that is, for now, distinct to the sharp-seeing larva of sunburst diving beetles, which live in North American streams.

Buschbeck, whose research has already been used to help design high-tech camera systems, netted an investment of more than half a million dollars from the NSF last year to expand her study of beetles’ eyes. 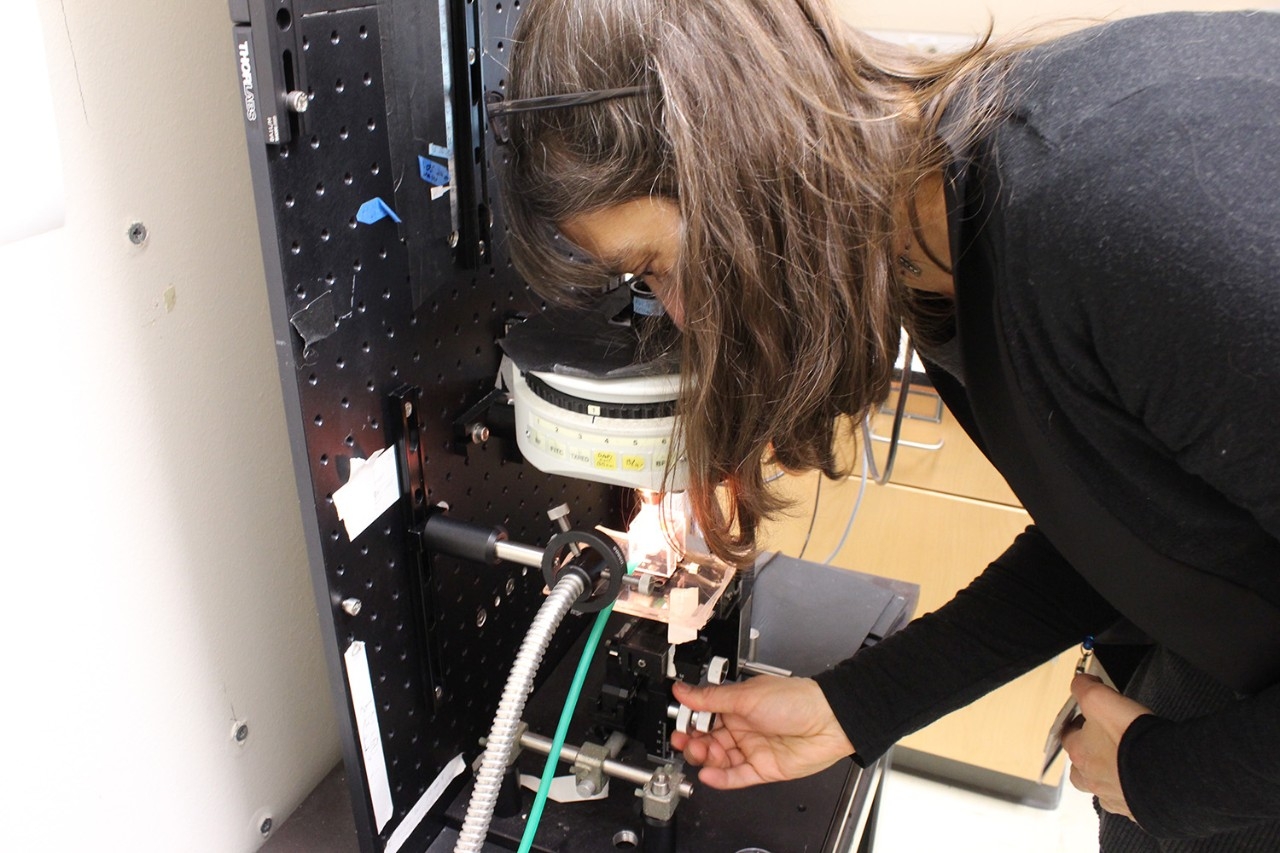 UC’s Elke Buschbeck adjusts her one-of-a-kind ophthalmoscope that can measure the eyesight of spiders, beetles and even fruit flies. 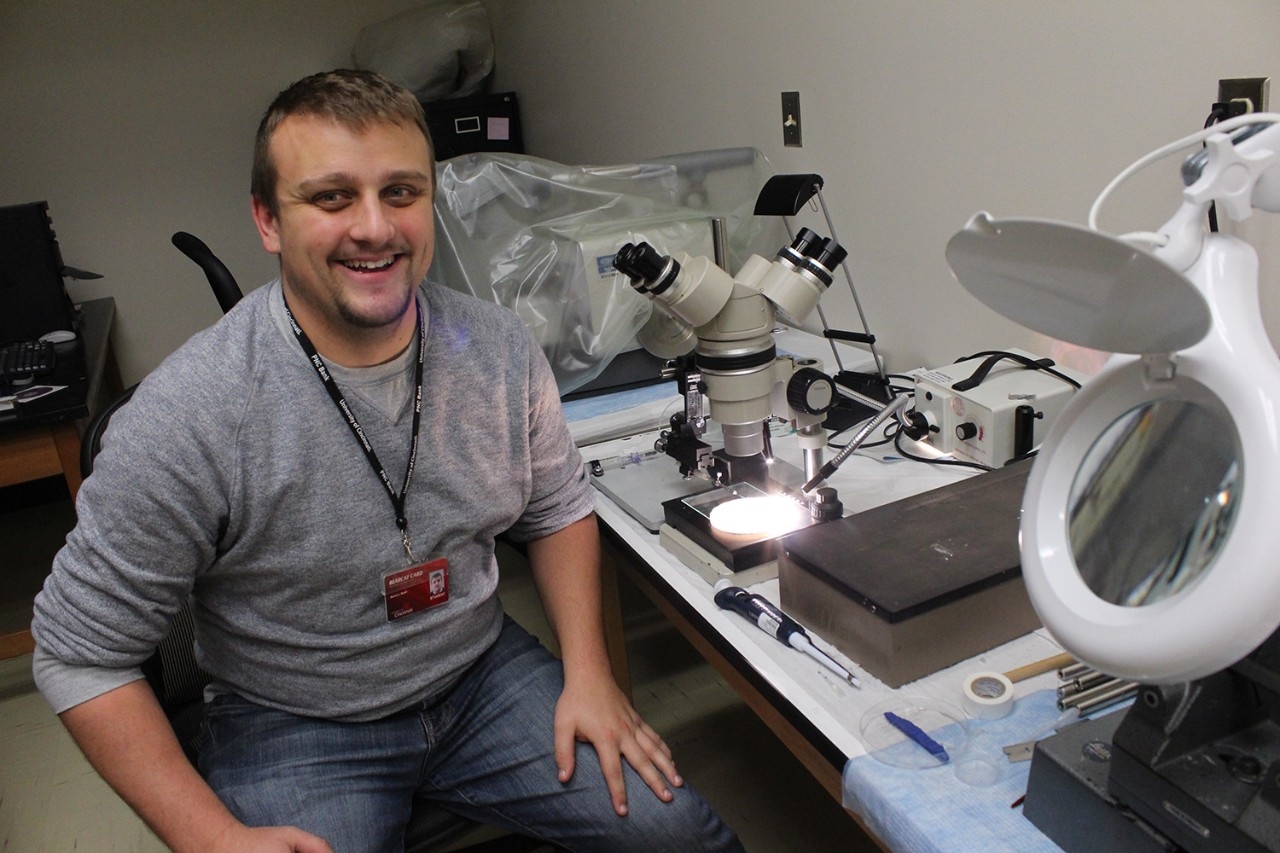 Biological Sciences doctoral student Aaron Stahl spends hours examining sunburst diving beetles’ eyes. The insect has natural bifocal lenses, which means it can simultaneously focus on objects that are far away and close up.

In her lab, Buschbeck and her doctoral students are conducting experiments to compare how vision develops in the sunburst diving beetle larva to how vision develops in fruit flies. Doctoral student Aaron Stahl has identified 11 kinds of proteins in the beetles’ lenses and is working to figure out what roles those different proteins play in how the beetles’ eyes develop and function.

That painstaking and complicated work involves removing, or “knocking out,” specific proteins in a sub-set of beetles’ genes, then looking for changes in how their eyes and vision develop. Since many of the genetic mechanisms at work in beetles and fruit flies are likely also at work in humans, their research could help us gain insights into how we see the world, Buschbeck says. 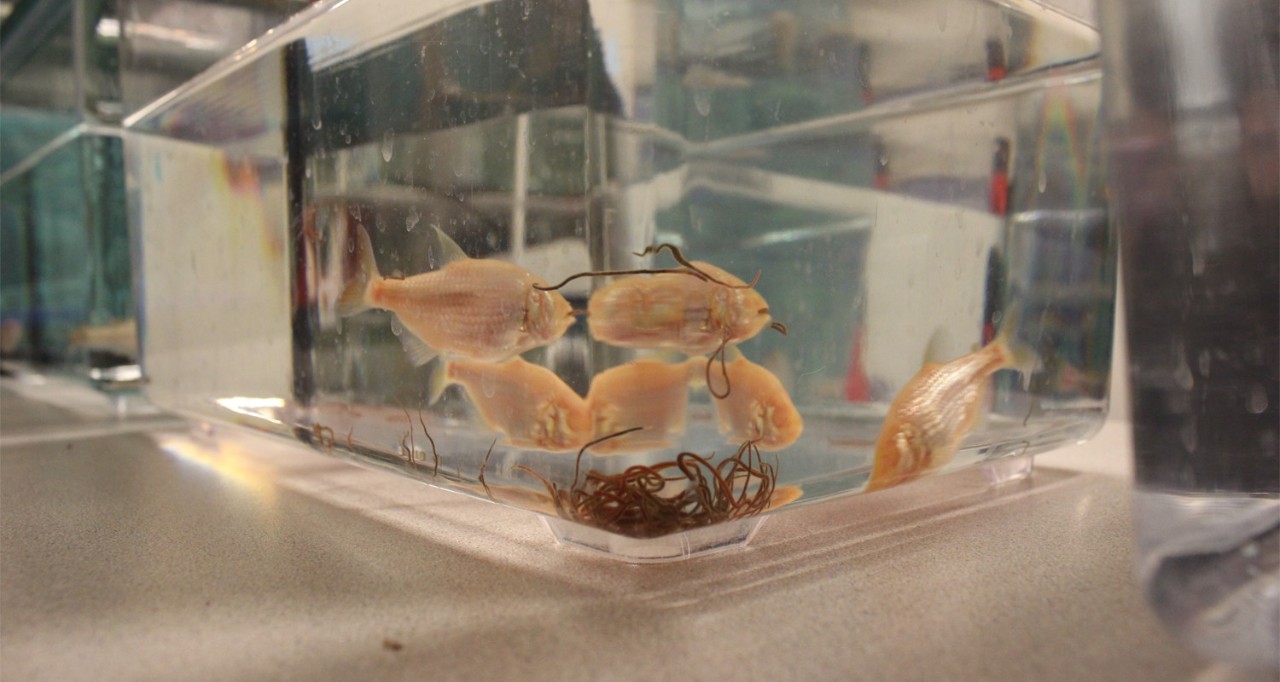 By studying asymmetrical abnormalities in the skulls of blind cavefish, sensory researchers hope to find out what causes the seemingly random abnormalities. Blind cavefish find food faster and eat it more efficiently than their closer-to-surface dwelling peers.

Three plastic fish tanks, smaller-than-shoebox-sized and with different color lids, sit on a plain white table in a sterile, windowless room. At first glance, they could pass for minimalist dorm room décor. But they are, in reality, critical components in Biological Sciences Assistant Professor Joshua Gross’ award-winning lab.

One of the tanks holds surface-dwelling fish, another holds fish that thrive in total darkness. The third holds hybrids of the first two that have been bred by Gross and his sensory research team.

At first, Gross simply wanted to understand how these different types of fish adapted to survive in their different environments. How did the blind cavefish, creatures with no eyes and no pigment, sense where food was and how to get it? What genetic changes had happened to sharpen some of their senses and completely eliminate others?

His questions garnered interest, and funding, from both the NIH and the NSF—more than $2 million worth over the next five years. Learning how species can adapt to and live successfully in new environments provides insights into how evolution happens, knowledge that could apply across species and over time.

Josh Gross (at right) has earned funding from the National Science Foundation and the National Institutes of Health for his research on blind cavefish.

Gross can illustrate part of the adaptation with a simple experiment. He drops a handful of thread-thin worms into the two fishes’ tanks. The sighted fish are skittish and approach the food with trepidation; they eat slowly and don’t consume very much. The blind fish, on the other hand, sprint toward the food; they eat more and they eat more quickly.

But what about that third tank of hybrid fish?

As Gross and his students studied the blind cavefish, they saw something unexpected. Some of the blind cavefishes’ faces were lopsided. And so were some, but not all, of their hybrid offspring in that third tank. They had uncovered another piece of a genetic puzzle, and this one had a more direct link to humans, another species with a documented history of “asymmetrical abnormalities.”

What causes the abnormalities that seem so random? Gross is now working to find out. His team suspects that the sensors inside the fishes’ heads are actually helping shape bone development, so they are mapping the location of sensors and their relation to bone structure, looking for patterns that might lead to answers. 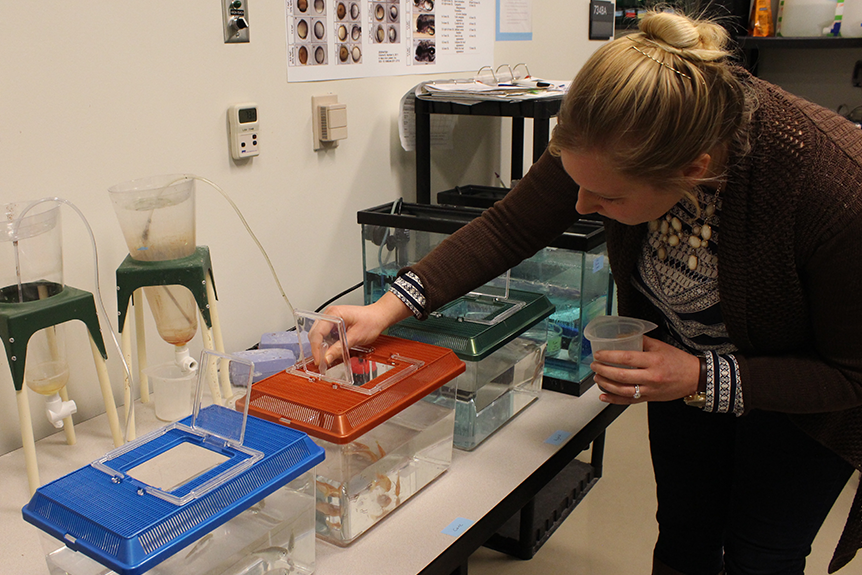 Three tanks hold surface-dwelling fish, blind cavefish and hybrid fish, all of which offer important clues about behavior and sensory perception to researcher Josh Gross and his team. 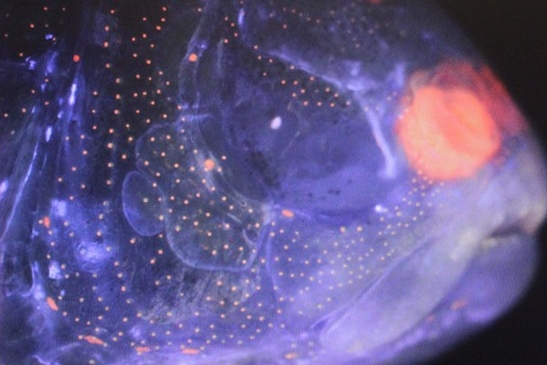 Their findings, like the sensory work done by others in the SBBE group, may seem tiny, and yes, microscopic, to most. Counting the sensors that detect a certain smells in a fruit fly’s antenna, tracing the order of neurons fired when a leech senses light, finding a protein that sharpens a beetle’s vision.

But these micro-focused researchers and their students understand that each discovery sheds an important point of light on the systems that define not only our individual realities, but our communal world. 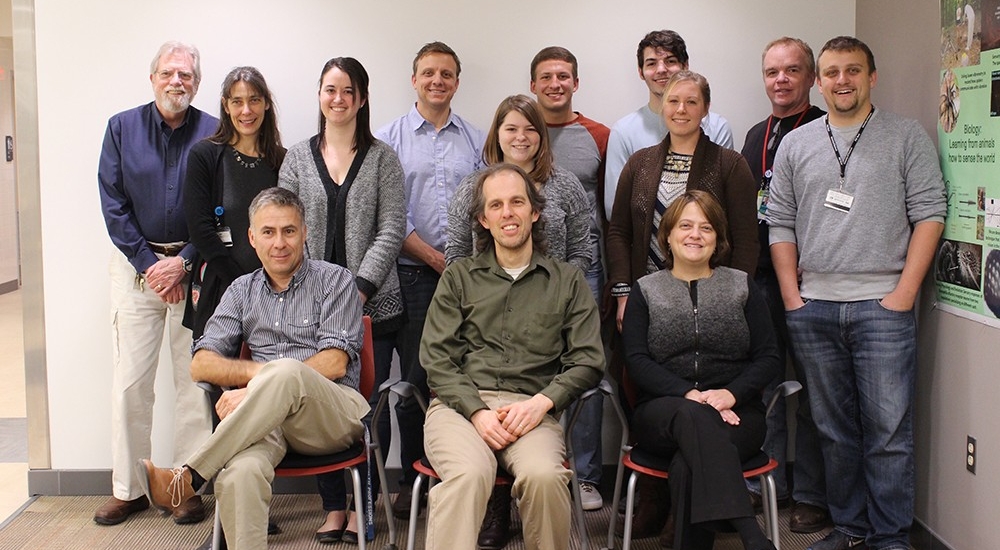 The Sensory Biology, Behavior and Evolution research team in the McMicken College of Arts and Sciences Biological Sciences Department earns millions of dollars of competitive research funding as they explore how creatures small and not-so-small sense the worlds around them. photo/Jean Assell

Elissa Yancey is associate director of marketing and communications in the McMicken College of Arts and Sciences. She can be reached at 513-556-4350 or elissa.yancey@uc.edu. 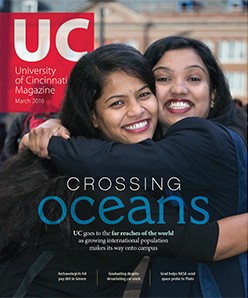