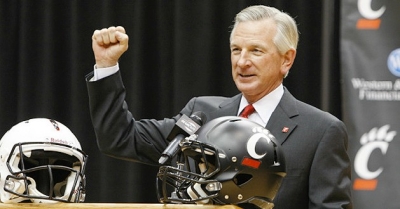 Tommy Tuberville is announced at the University of Cincinnati, Dec. 8, 2012. Photo/Lisa Ventre

Tuberville, widely regarded as one of the top coaches and recruiters in the collegiate game, comes to Cincinnati after three years at Texas Tech.

"I'm very proud to welcome Tommy, Suzanne, Tucker and Troy into our Bearcats family," director of athletics Whit Babcock said. "Coach Tuberville's record speaks for itself over the past 17 seasons. It also speaks volumes to the visibility and leadership of our University that we were able to attract such an accomplished coach to lead our program into the future."

In three seasons in Lubbock, Tuberville led the Red Raiders to a 20-17 mark and a pair of bowl appearances. In 17 seasons as a head coach, he holds a 130-77 career record.

Tuberville assembled the top two recruiting classes in Texas Tech history that placed the Red Raiders in the national Top 25 in both 2011 and 2012.

Tuberville's strong bowl history proved beneficial for the Red Raiders as he led them to a 45-38 win over Northwestern, which gave Tech its third consecutive win over a Big Ten foe.

The excitement for Tuberville's first season was historic as a new single-season school record for season tickets was established with sales peaking at 46,565. Along the way, Tech also set a new standard for home attendance as an average of 57,107 fans attended the six home games at Jones A&T Stadium.

In 10 seasons at Auburn (1999-2008), Tuberville led the Tigers to 85 overall wins, which ranks fourth in school history. The Tigers also won 49 Southeastern Conference games, a number that is the fourth-best mark in the SEC. Tuberville led Auburn to seven-straight bowl appearances, including New Year's Day bowl games in four of those years.

In 2007, Tuberville led Auburn to a 9-4 mark, including a 5-3 record in the Southeastern Conference with wins at No. 4 Florida and a record-setting sixth consecutive win over Alabama in the Iron Bowl. The Tigers concluded the season with an overtime victory over Clemson in the Chick-Fil-A Bowl, marking the program's fifth bowl victory in the last six seasons. For the second consecutive year, Tuberville was a finalist for the Liberty Mutual Coach of the Year award for his efforts on and off the field.

The 2006 season saw Tuberville direct the Tigers to their second season with at least 10 wins in the previous three years with an 11-2 record after a 17-14 victory over Nebraska in the AT&T Cotton Bowl Classic. One of three finalists for the inaugural Liberty Mutual Coach of the Year award, Tuberville's 2006 squad was the only program in the country to defeat two teams ranked in the top five nationally - National Champion Florida and LSU.

Coming off a perfect 13-0 season in 2004, expectations for Tommy Tuberville's 2005 Auburn squad were modest after the Tigers lost four players to the first round of the NFL draft, including their entire starting backfield. But Auburn surprised many of the experts, finishing 9-3 and earning a share of its fifth Southeastern Conference Western Division title in six years. Auburn ended the regular season with back-to-back victories over Georgia and Alabama - two teams ranked at the time in the top 10 - setting a new school record in the process with 22 victories over a two year period.

In 2004, Tuberville led Auburn to its best season ever as the Tigers won a school-record 13 games and captured the SEC Championship and the NOKIA Sugar Bowl title. Auburn won its first conference title since 1989, including its first outright championship since 1987. Auburn defeated five top 15 teams, becoming just the 10th NCAA Division I-A team to finish 13-0 or better. The Tigers earned their first ever berth in a Bowl Championship Series game and defeated VirginiaTech, 16-13 in the Sugar Bowl. For his efforts, Tuberville was named the AFCA, Associated Press, Paul "Bear" Bryant, FCA, SEC and Walter Camp Coach of the Year.

The season before Tuberville's arrival, Auburn finished with a dismal 3-8 overall record and a last place finish in the SEC Western Division. Tuberville guided the program back to the top of the league standings, leading Auburn to an SEC Championship, five Western Division titles including outright championships in 2000 and 2004 and co-championships in 2001, 2002 and 2005. Tuberville has directed Auburn to eight consecutive bowl appearances, including five New Year's Day bowl berths and three consecutive January 1 bowl games from 2005-07.

Tuberville built an Auburn program that excelled both on and off the field. Players flourished under Tuberville's guidance as Auburn earned 36 first-team All-Southeastern Conference awards, eight All-America honors, 26 SEC All-Freshmen accolades, 57 SEC Player of the Week honors, two SEC Player of the Year awards, two Jacobs Awards presented annually to the league's top blocker and one Most Valuable Player of the SEC Championship game.

Thirty-two players were selected in the NFL Draft including an SEC-record four in the first round of the 2005 Draft. Running backs Ronnie Brown and Carnell Williams were taken second and fifth respectively, while cornerback Carlos Rogers was selected ninth overall and quarterback Jason Campbell was picked 25th in the first round. It also marked the first time in NFL Draft history that an entire backfield from the same team was taken in the first round. Since 2004, 26 Auburn players have been drafted, including 22 in the last five drafts. Of those 22 selections since 2005, almost half were selected in the first two rounds--five first-round selections and five second- round picks. Carnell Williams earned NFL Offensive Rookie of the Year honors in 2005, while in 2006 Marcus McNeill became the first NFL rookie offensive lineman in 16 years to start in the Pro Bowl. McNeill was named to the 2007 Pro Bowl making him just the second NFL lineman ever to be named to the Pro Bowl in their first two years.

The East team head coach at the 2006 Hula Bowl, Tuberville is currently on the Board of Trustees of the American Football Coaches Association. For his numerous achievements during his career, Tuberville was inducted into the Arkansas Sports Hall of Fame in February, 2008.

Off the field, Auburn earned more than 81 SEC Academic Honor Roll distinctions during Tuberville's tenure, and when the NCAA released its Academic Progress Report (APR) in February 2006, Auburn football had a multi-year score of 981, which was the highest score among public BCS conference institutions. The program received public recognition from the NCAA for being in the top 10 percentile nationally and was one of only four BCS institutions to earn such distinctions.

In May 2008, he participated in the inaugural Armed Forces Entertainment Coaches Tour in the Middle East with fellow college coaches Mark Richt of Georgia, Randy Shannon of Miami (Fla.), Jack Siedlecki of Yale and Charlie Weis of Notre Dame. With a mission to help boost troop morale, the six-day tour made stops at military bases in Germany, Qatar, Bahrain, United Arab Emirates and a visit to the USS Nassau in the Persian Gulf. His support of the military has carried over to Texas Tech as he has played an integral role with Under Armour in hosting two Wounded Warrior Project games at Jones AT&T Stadium (vs. Missouri in 2010 and Oklahoma State in 2011).

While at Ole Miss from 1995-98, Tuberville posted a 25-20 record. Inheriting a Rebel program plagued by NCAA sanctions and probation, he guided Ole Miss to a winning record in his first season in 1995, despite having just 61 players on scholarship. He did not have a full compliment of scholarship players to work with in any of his four years at Ole Miss.

By the time he had three recruiting classes under his belt, Tuberville led Ole Miss to an 8-4 mark and a victory in the inaugural Motor City Bowl in 1997. His efforts earned him Associated Press SEC Coach of the Year Honors and American Football Quarterly magazine selected him as runner-up for its Schutt Sports Coach of the Year honor.

Prior to becoming head coach at Ole Miss, Tuberville served as defensive coordinator and linebackers coach at Texas A&M for one season. In 1994, he helped lead the Aggies to a 10-0-1 record and No. 8 final ranking by the Associated Press. Under his direction, the Aggie defense finished fourth nationally in scoring defense (13.1 ppg), fifth in total defense (265.5 ypg) and sixth in rushing defense (92.4 ypg).

Tuberville served as a member of the University of Miami staff for eight seasons from 1986-93, taking over as defensive coordinator in 1993. While serving on the staffs of Jimmy Johnson and Dennis Erickson at Miami, Tuberville was a defensive coach on teams which won three national championships, posted an 87-9 record and played in nine consecutive New Year's Day bowls.

As defensive coordinator for the Hurricanes in 1993, Tuberville directed a Miami defense which was ranked No. 3 nationally in scoring defense (12.6 ppg) and No. 5 nationally in pass defense (91.15 ypg).

Tuberville began his collegiate coaching career at Arkansas State in 1980, coaching various segments of the Indians' defense over the next five seasons. During a five-year stay at Arkansas State, Tuberville coached defensive backs, nose guards and linebackers. During his final year at ASU, the Indians advanced to the second round of the NCAA Division I-AA playoffs. He began his coaching career at Hermitage (Ark.) High School where he spent two years as an assistant and two as a head coach. After three straight four-win seasons, Tuberville guided HHS to a 7-3 mark in 1979 before moving to Arkansas State.

A 1976 graduate of Southern Arkansas University, Tuberville was a letterman at free safety and a two-year member of the golf team at SAU. He is a 1972 graduate of Harmony Grove High School in Camden, Ark.

Tuberville is married to the former Suzanne Fette of Guilford, Ind. They are the parents of two sons, Thomas Tucker and Troy Allen.