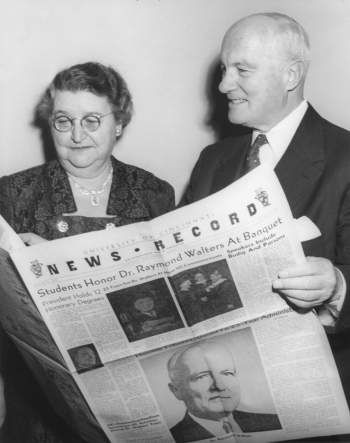 President and Mrs. Raymond Walters hold a special souvenir edition of The News Record, presented to the couple at the president's student-sponsored retirement dinner in 1955.

Her name was Elsie, but her husband, UC’s longest-running president, called her “BobOLink,” which is also the name of a songbird. Throughout their 46-year marriage, Raymond Walters remained charmed and fascinated by his wife, as passages reveal in his diaries, which were donated to UC’s Archives and Rare Books Library.

Walters served as president of UC for 23 years, from 1932-1955. The diaries hold daily activities and thoughts of President Walters over the decades, from 1925-1960, and as a result uncover decades of history, including the history of UC. But the diaries also lovingly reveal valentine gifts, wedding anniversaries and tributes to his wife.

Raymond Walters and Elsie Rosenberg, both from Bethlehem, Pennsylvania, married on Oct. 26, 1909. They had three sons, Philip, Everett and Raymond Jr.

After Walters was selected president of UC in 1932 and moved to Cincinnati from Swarthmore College in Pennsylvania, his diaries describe such everyday details as buying a new battery for the car, a new license for their dog, Bob, and other incidentals.

But Walters’ diaries also offer a glimpse of his dedication to Elsie. As they settled in Cincinnati, the couple enjoyed long walks, attended services at Calvary Church, ate fried chicken Sunday dinners, attended the symphony, listened to radio programs and read around a warm fire. 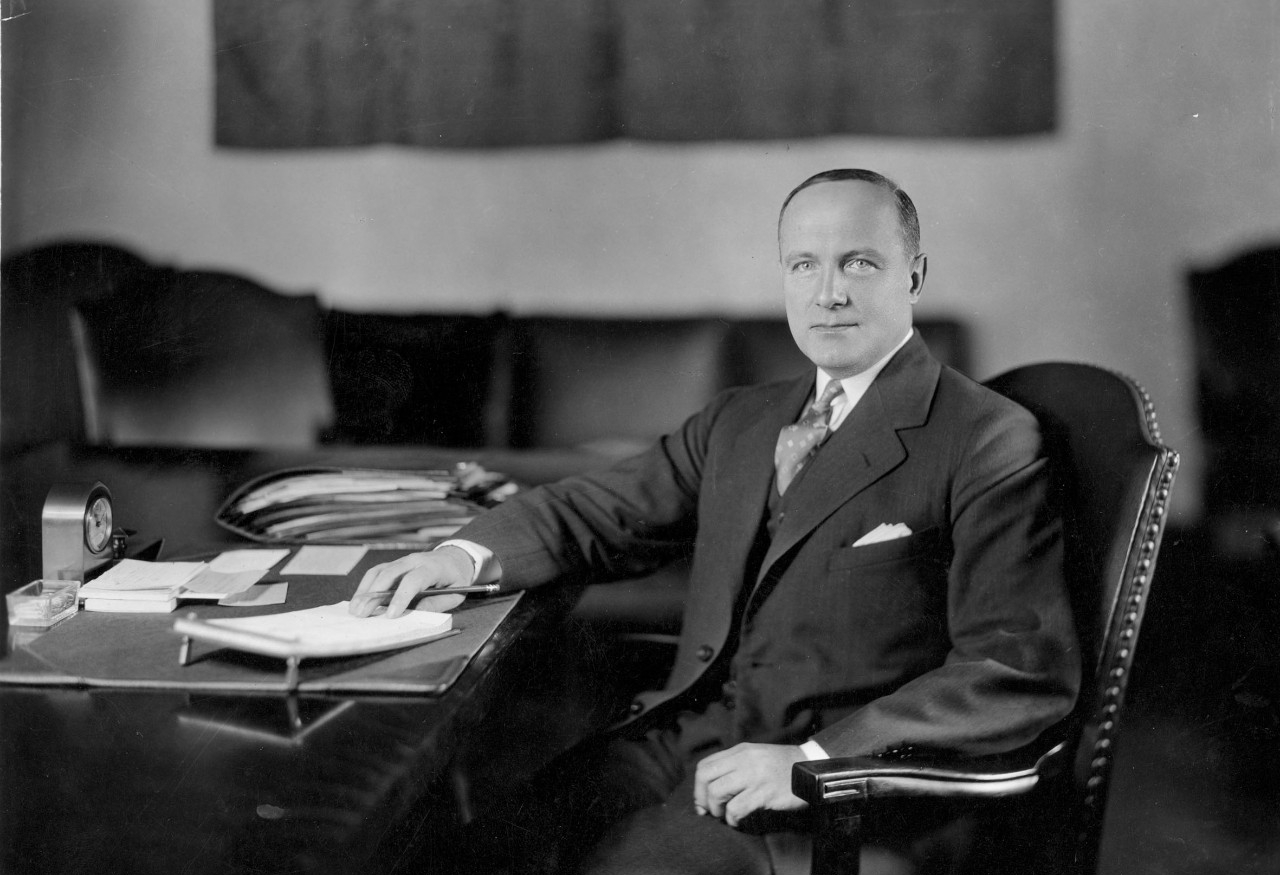 Raymond Walters during his early presidency. Photos/courtesy of UC Archives

Numerous passages reveal his love of his wife and their happy marriage:

This is our wedding anniversary. It has special significance to me because I now have had BobOLink for 23 years, precisely as long as her parents before me. What happy years they have been. The day has been rainy and overcast. So, as we have gone out a great deal in the evening, we agreed to have our anniversary dinner at home and tonight we are enjoying a quiet time before our log-fire, and Philip is reading. We are content, with hearts full of joy.

BobOLink’s birthday. Today she catches up to me. We are both 47.

This is the 24th anniversary of our wedding. Yesterday I telegraphed flowers to BobOLink. I hope she received them and the note I wrote her Monday sending my love and my word of rejoicing. Each year she means more to me. How much more than I could have dreamed on Oct. 26, 1909, our marriage has been in my life. I have been blessed by God. 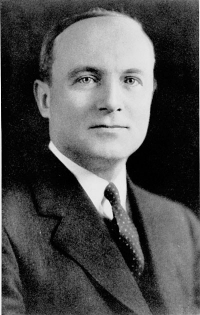 Returning from a trip to Washington, D.C., on May 20, 1934, he writes, “This is BobOLink’s birthday. The train is carrying me to greet her, to hold her tight, and to tell her how infinitely much she means to me. No man ever had a sweeter, stauncher wife and no couple were more ever truly one.”

Elsie Walters received a traditional valentine bouquet every year of their courtship and marriage.

There is a bouquet of lovely violets on the table before me here in our living room. They belong to the dearest girl in the world whom I have just kissed, my Valentine.

A bunch of violets, another in a long, unbroken series of Valentines, arrived by messenger for BobOLink this morning. She appreciates them, I gather.

BobOLink received her 50th successive Valentine today. (He was also counting the years of their courtship.)

He writes of beautiful, snowy winters, along with long, dreary, rainy winters as well as hot, dry summers and severe storms — the typical Cincinnati weather. Walters occasionally described the luxury of sleeping in on the weekend until noon.

A Jan. 26, 1937, entry reveals  the couple enjoyed seeing actor Leslie Howard play in Hamlet at the Taft Theater in the afternoon, followed by an evening with the Cincinnati Symphony Orchestra.

Walters' writings on other events

Walters writes of reading Shakespeare sonnets, Wordsworth poems, Keats and the writings of President Abraham Lincoln. He was pleased to complete his book, “Stephen Foster, Youth’s Golden Gleam,” published in 1936 by the Princeton University Press. Walters’ collection on the composer also is part of the UC Libraries’ special collections.

Walters’ leadership at UC in 1932 began as the nation struggled under the Great Depression (1929-39) which also meant the university was struggling financially in hard economic times. He writes about how he urged the board of directors to omit his formal inauguration as the new president because of the troubled economy. The diaries reveal his concerns for university faculty and staff, as the economy forced salary reductions in the mid 1930s to balance the university budget. 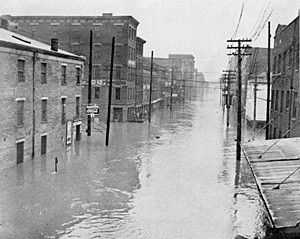 A view of Cincinnati's Second Street from the Suspension Bridge during the Great Flood of 1937.

He writes during his early presidency in the 1930s about his apprehensions over world events such as the death of King George V in England, his initial support and later criticism about the leadership of U.S. President Franklin Delano Roosevelt and the rise of Adolf Hitler in Germany. He detailed events in the city and how the university responded to the Great Flood of 1937, which shut down the university from Jan. 23-Feb.8.

His diaries also contain two newspaper articles and a passage praising a student council dinner held in the Great Hall in his honor for his retirement in 1955. The Cincinnati Times-Star reported that UC student Shirley Parsons, chair of the student social board, presented the couple with a signature book that held the signatures of nearly every UC student. The article indicated the book was prepared over a three-month period. The couple also was presented with a special souvenir edition of The News Record. 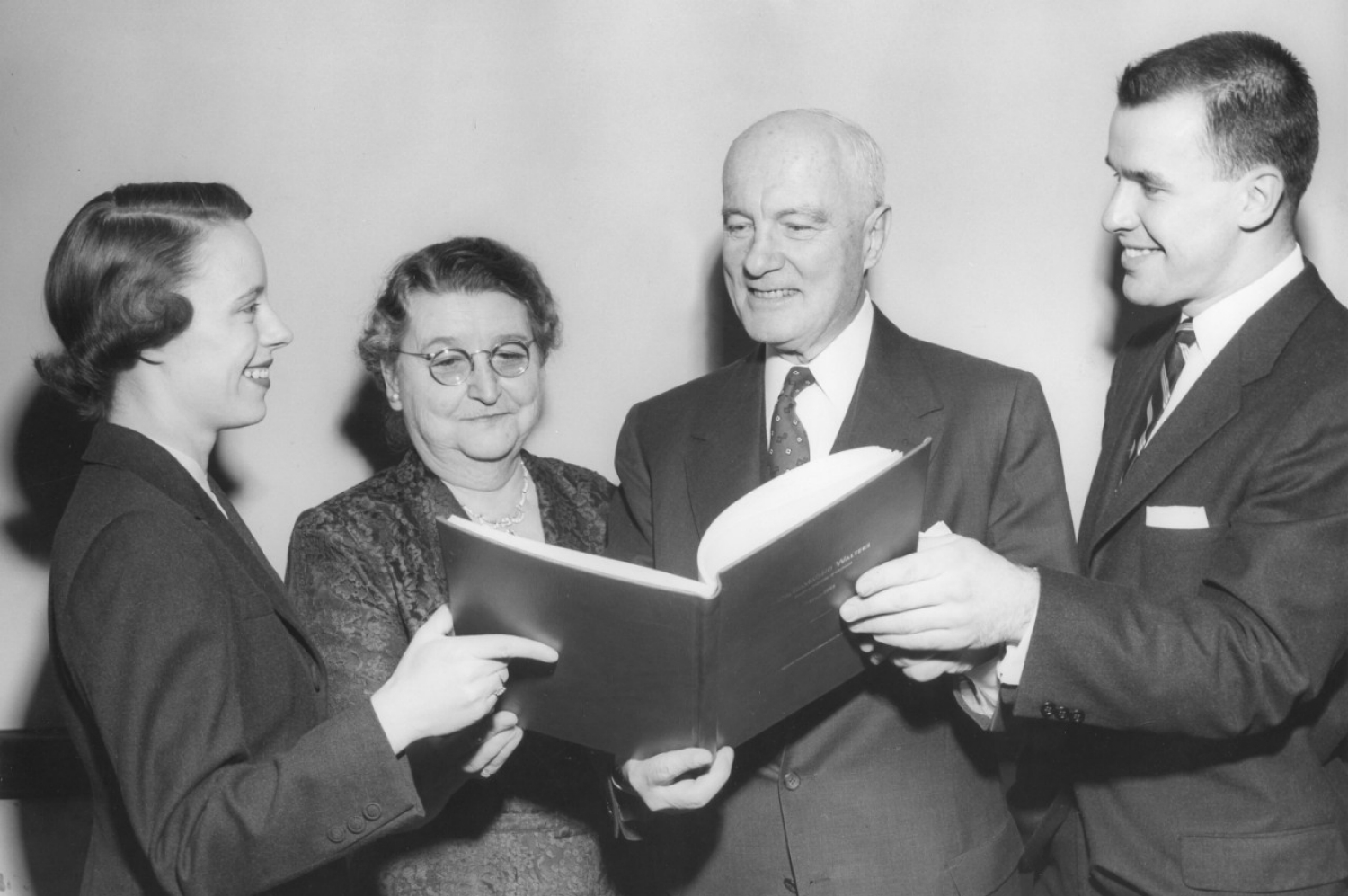 From the left: Shirley Parsons, Elsie Walters, Raymond Walters, Otto Budig. The Walters are presented with a signature book at Raymond Walters' student-sponsored retirement dinner in 1955.

The Times-Star also mentioned that Walters was presented with a gold key to Blegen Library (where Walters’ emeritus office would be located) by Otto Budig Jr., who at that time was president of the junior class. Budig graduated from what is now the Carl H. Lindner College of Business with a bachelor's degree in accounting in 1956. He became a successful entrepreneur and philanthropist and received an Honorary Doctor of Humane Letters from the university in 2009. 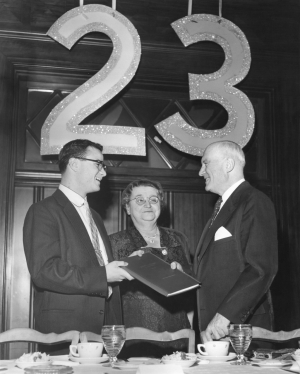 Irwin Metzger, president of the University of Cincinnati Student Council, at left, with Elsie Walters and President Walters at the UC student testimonial dinner in 1955. Photo/Enquirer (Cornelius)

Walters reflects on the 1955 retirement student celebration in his diary:

I felt deep emotion in my heart. They so manifestly had good will toward me in their hearts.

I rewarded my audience with a short address strictly about the students and their work in the university and the future that lies before them. My close was the eternal assurance of Jesus: ‘My peace I give unto you…Let not your heart be troubled, neither let it be afraid.’

President Walters’ diaries were donated to UC Archives in the 1970s by his son, Philip Walters, and the Walters family. Raymond Walters died on Oct. 25, 1970, one day short of his wedding anniversary. His wife, Elsie died on May 20, 1956.