UC's Vern Scarborough, professor of anthropology, is part of a large interdisciplinary and global collaborative effort to inspire modern water strategies by looking at how our ancestors managed water and survival challenges. Tubes of thousand-year-old rock and sediment core samples (featured in the photo) have helped researchers determine the age of organic and structural material found in the ancestral Puebloen site at Chaco Canyon, New Mexico. photo/Lisa Ventre/UC Creative Services

Legends of the lost reservoirs

UC interdisciplinary researchers and global collaborators dig into the past to inspire modern water management strategies that can save time and money and may avoid negative effects on our climate.

Tucked away in a laboratory in University of Cincinnati’s Braunstein Hall are tubes of rock and dirt that quietly tell a story –– a story that looks back on ancient society’s early water conservation. UC researchers hope the story will aid in the future preservation of our planet’s most precious resource.

In an effort to help manage the world’s water supply more efficiently, an interdisciplinary team of University of Cincinnati researchers from the departments of anthropology, geography and geology have climbed through rainforests, dug deep under arid deserts and collaborated with scientists around the world to look at how ancient humans manipulated their environment to manage water.

“We begin by asking, ‘What is water to humans, how do we engage with it and how does the environment engage us?’” asks Vernon Scarborough, professor and department head in UC’s Department of Anthropology. “When we look at the trajectory of our changing climate, we realize that the issue is not just climate change but also water change. Climate and water work synergistically and can affect one another in critical ways.

“Given the current climate patterns, in this and the next century, we will likely face further rising sea levels, less potable water and a compromised availability of freshwater as a result of drought in many areas and unusually heavy rains and runoff in others.

“So we are looking at how the past can inform the present,” adds Scarborough. 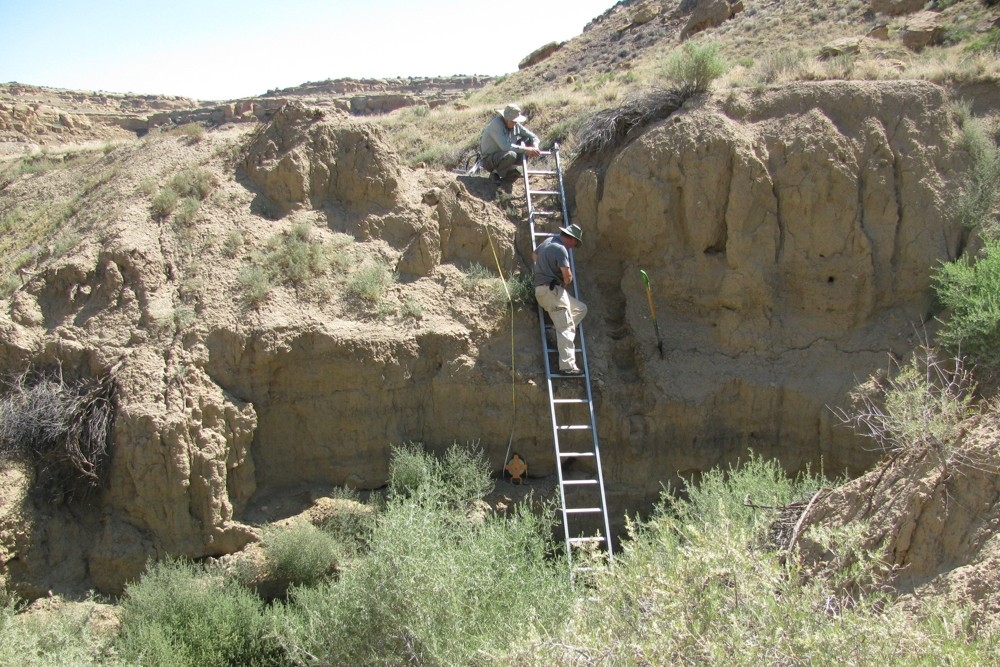 “The point of these projects is to help, in part, create effective modern water policy,” says Scarborough, who also works closely with the United Nations Educational, Scientific and Cultural Organization (UNESCO). “Exploring all these unique points on the globe is the only way we’re going to get at it, and it’s our teamwork, communication and cooperation that will make this project so successful.”

As a result of their collaboration, several members of UC’s research team will be presenting the outcome of their field work at one or both of two upcoming prestigious scientific annual meetings: the 77th annual Society for Applied Science meeting in Santa Fe, New Mexico, and the 82nd annual Society for American Archaeology meeting in Vancouver, British Columbia, Canada. Both are meeting this week.

For more than two decades, the researchers worked intricately together in remote areas that are known for their seasonal water and environmental challenges. One core investigation lies deep in the ancestral Puebloan community in Chaco Canyon, New Mexico –– the ancestors of modern Puebloans that thrived for more than 300 years in a dry desert in the middle of the American Southwest.

Scientists have long debated whether this area was truly a sustainable thriving community based on local resource access or an occasional gathering spot for ceremonial rituals dependent on importing food and related supplies. 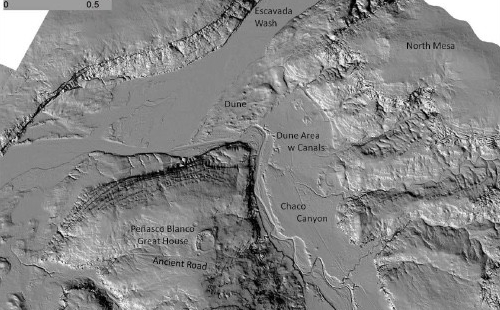 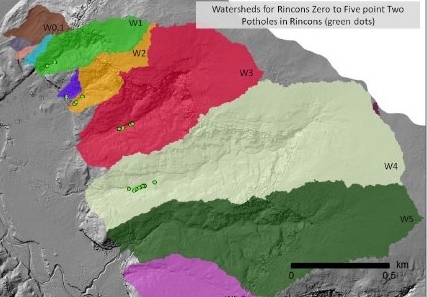 Nicholas Dunning and Christopher Carr, both UC professors of geography, looked broadly at the geographic area documenting and sampling the stratified layers of rock and sediment, while Lewis Owen, also a UC professor of geology, used optical-stimulated luminescence, a unique technique to accurately determine the age of core sand and soil samples.

“We found geochemical evidence for corn grown in the area during this time, which is a very water-intensive crop, as well as sophisticated irrigation and water-management techniques,” says Kenneth Tankersley, UC associate professor of anthropology and geology.

To get a 3-D look at the surface of the canyon, Carr used sophisticated LIDAR technology, or light, imaging, detection and ranging technology, to measure the surface elevation of the ground from an airplane.

“This technology uses a laser beam to measure the morphology of the surface and is totally revolutionizing archaeology,” says Carr. “The key thing LIDAR gives us is elevation so we know how the water flows off the mesa tops into the drainage ditches and into the valley floors.

“LIDAR ultimately tells the archaeologists where to excavate and look for evidence of agriculture, canals and water control gates beneath the surface.” 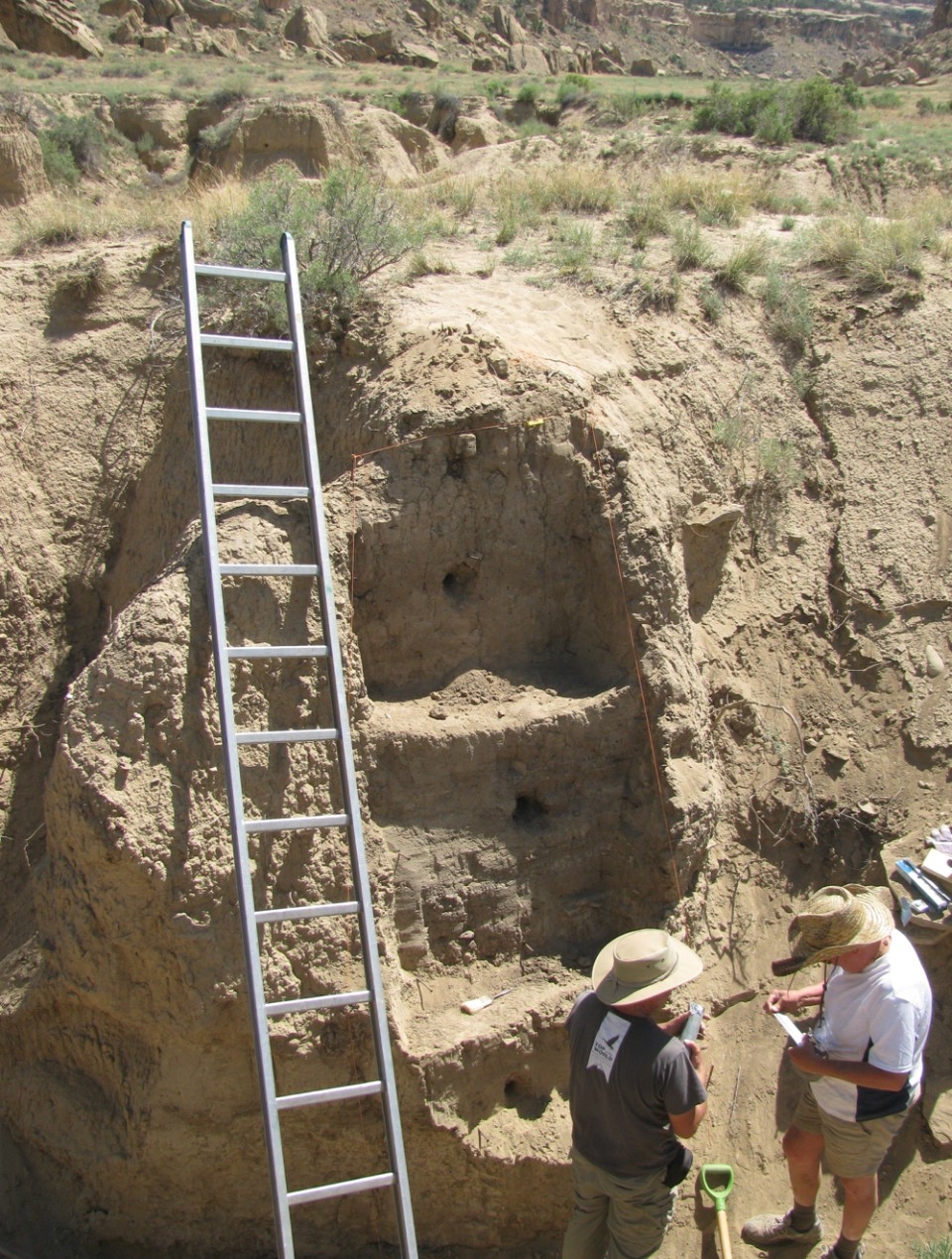 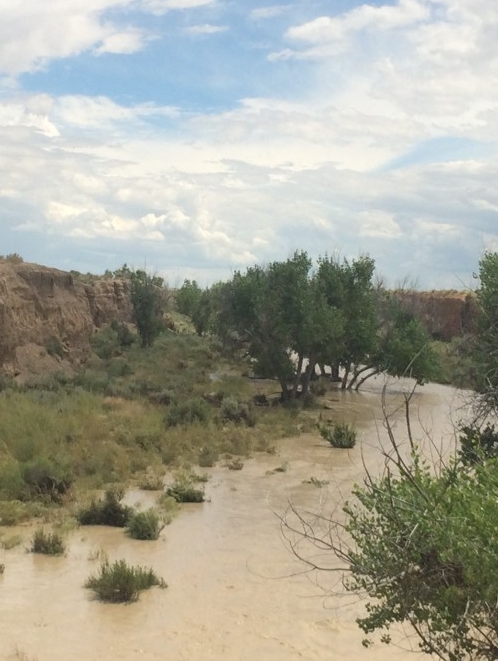 To uncover the thousand-year-old secrets for survival held in the geochemical deep core soil samples, Tankersley, along with Owen and Warren Huff, UC professor of geology, employed laboratory sampling techniques to reveal that the high level of salt in the soil –– once thought by scientists to be harmful –– was in fact a form of a calcium sulfate mineralization that may have functioned to enhance the soil for the maize (corn) grown in that area.

“The surrounding mesas provided water in their springs after the snow melted,” says Tankersley. “During the rainy season when floodwaters hit, the Puebloans would capture runoff water from small canyons known as the rincons and local periodic streams such as Chaco Wash and Escavada Wash.”

Under this expeditious use of landscape, two key members of the Chaco water management project, Stephen Plog, professor of archaeology from the University of Virginia, and Adam Watson at the American Museum of Natural History were also part of the collaborative team that utilized DNA sampling techniques on human remains to reveal a remarkable matrilineal family line connected through the female lineage.

"To effectively manage water requires flexibility and creativity as rainfall is unpredictable in the Southwest,” says Samantha Fladd, an advanced doctoral student from the University of Arizona, also working on the Chaco project here at UC. “The presence of a hierarchical matriline helps to explain how Chaco residents coordinated these activities in order to practice successful water management and agriculture." 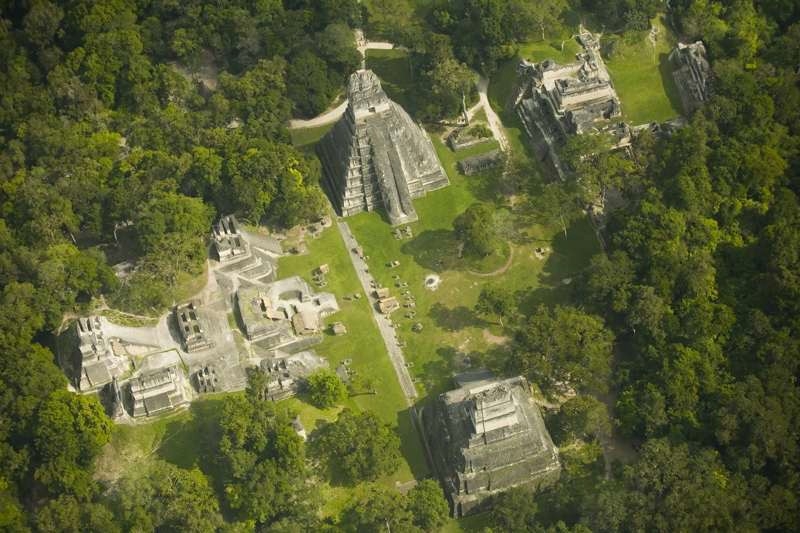 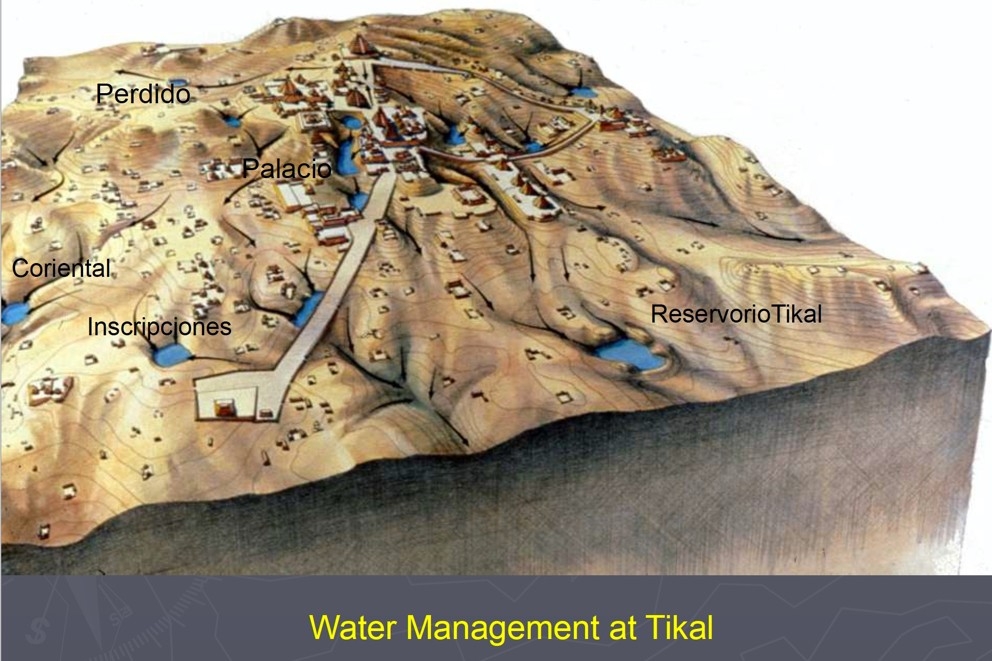 No forests, no rain

In contrast to Chaco Canyon’s desert aridity many of the researchers also spent a significant amount of time in the Guatemalan rainforests around Tikal –– a Central American site that coexisted at about the same time as Chaco Canyon more than a thousand years ago.

While the two environments couldn’t be more opposite in climate the researchers found Tikal’s water issues just as challenging. David Lentz, UC professor of biology, with the assistance of Scarborough, Huff, Tankersley, Carr, Owen and NSF-funded Dunning, discovered how the Maya civilization survived in Tikal after suffering several droughts.

Scarborough speculates the Maya channeled runoff during the rainy season and created elaborate water storage systems, allowing their civilization to thrive for more than three centuries. Eventually the Maya not only suffered from a changing climate, but they had added to their own demise, say the researchers.

“Essentially, they may have affected a change in their own climate,” says Scarborough. “After several years of deforestation –– clearing out trees and forests to make room for crops –– the Maya unintentionally, but perhaps dramatically upset their annual rainfall, which precipitated degrees of drought that ultimately forced them to abandon the once fertile environment. Sound familiar?”

With recent funding by the National Science Foundation, Dunning, along with Scarborough and other researchers, will spend a fifth season this summer as a co-principal investigator on the Yaxnohcah project along with Carr and four UC students. The focus of this study looks at the development of ancient urbanism in relation to water, land and forest management in the Maya lowlands and will be a presentation topic by Dunning and by Carr at the upcoming annual Society for American Archaeology meeting in Vancouver. 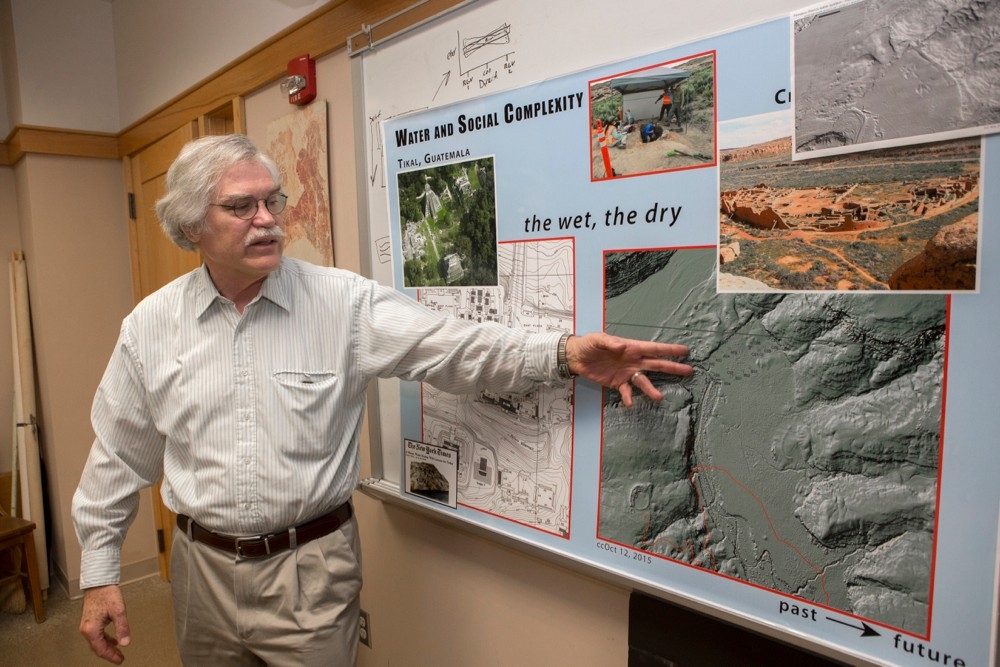 It takes a village

“Our collaborative research as a team is critical –– each one of us is an important cog in this investigation,” says Scarborough. “It takes each one of us and our individual expertise to effectively measure how well these early urban and rural communities adapted to climate change and managed their water resources.”

“We still have to deal with those same issues in our environment today. From an archaeological perspective, our changing climate is immediate, but it may be several years before the damage is fully apparent at a truly global scale,” Scarborough adds.

“We will begin to see sea levels rise by a good meter. Because over two-thirds of the largest cities on the planet occupy coastal margins, with estimates suggesting that an anticipated 80 percent of human population will gravitate toward urban settings in the near term, we really are approaching a truly ‘perfect storm’.”

While the researchers look at future water management as the direction of this research, they also focus on the constant changes to the landscape and the creatures that occupy these environments. Scarborough adds that If we are not careful, we will instigate even further change to a wide array of plant and animal species all over the world.

“If you don’t design for that appropriately, you can be building management networks and ways to capture and control water that will wind up getting buried like the build-up behind modern dams, or plans can get abandoned altogether as a river changes,” say Scarborough and Jon-Paul McCool, UC doctoral student under Dunning’s mentorship.

“How past populations dealt with variable precipitation like that identified at Tikal, Chaco Wash or drainage patterns overall has been very dynamic. Such investments in building massive dam projects today is a costly expenditure of money and time that might well benefit from views of the past.

“We don’t want to waste that money on high-priced water infrastructure if we can engage in smaller scale, lower investment strategies like our ancestors did.” 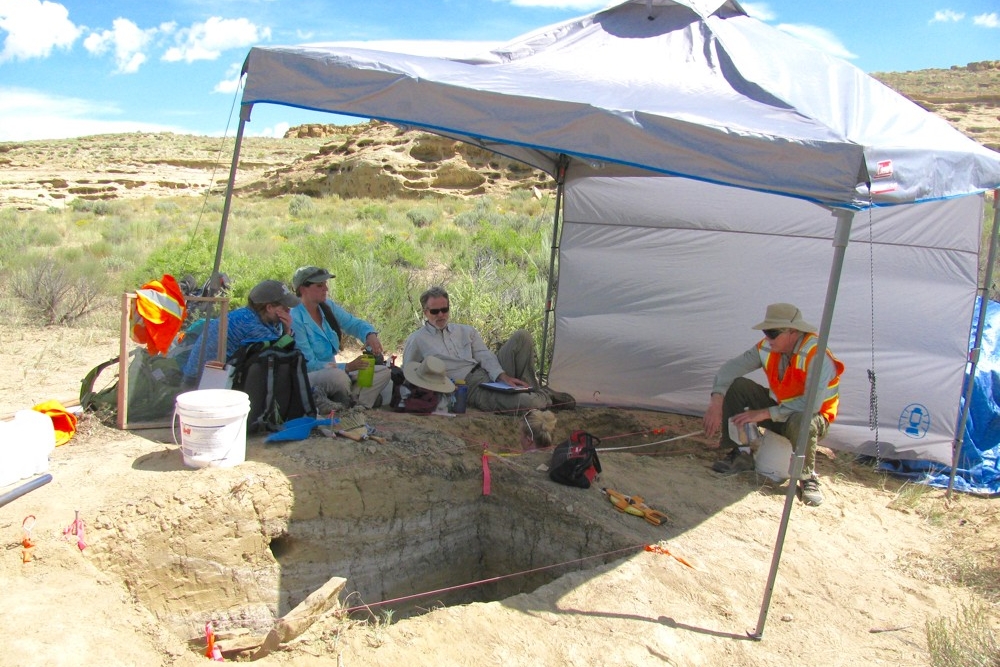 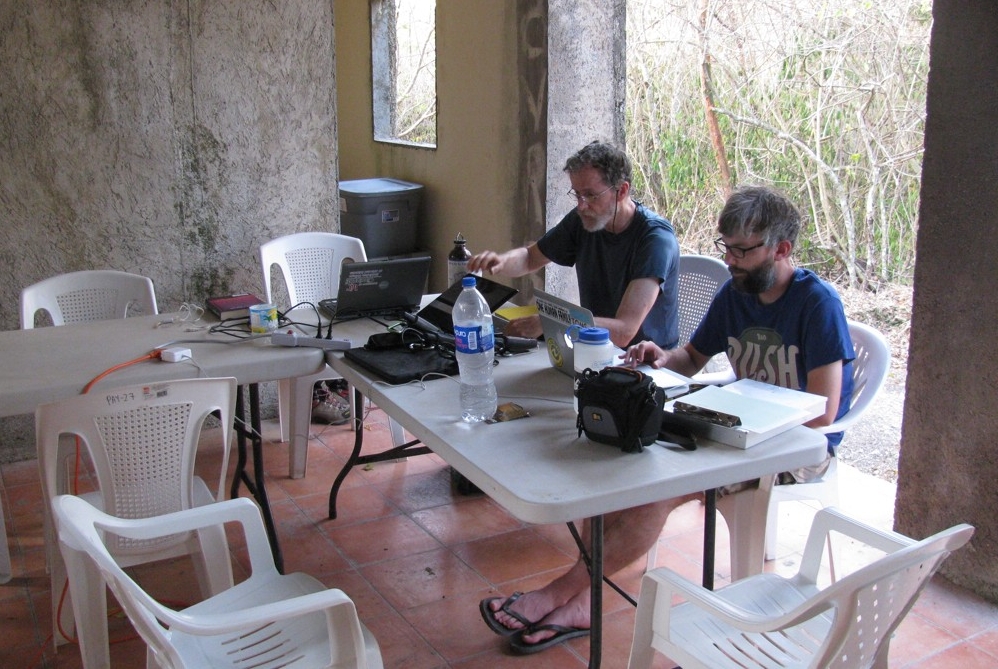 UC professor Christopher Carr and geography doctoral student Jeff Brewer take notes in the shade after a day of survey at the Yaxnohcah excavation camp in Campeche, Mexico. photo/Nick Dunning 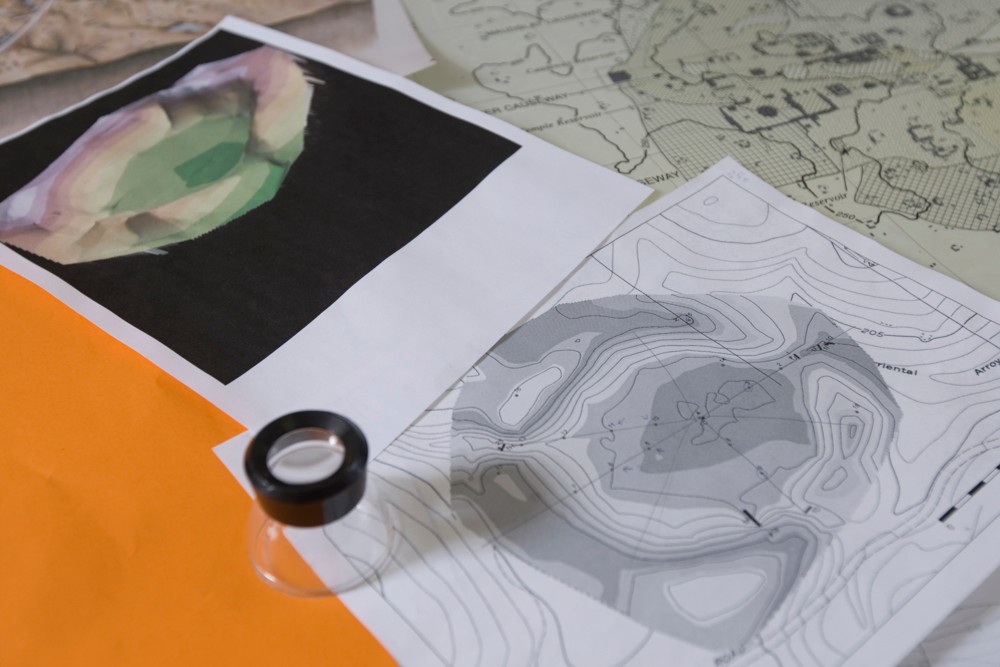 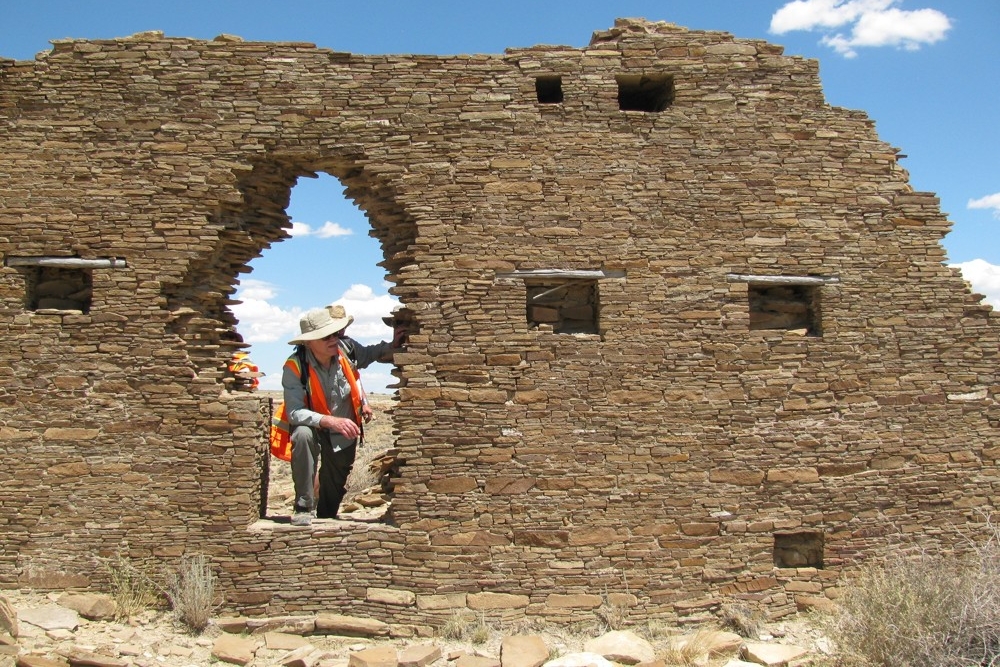 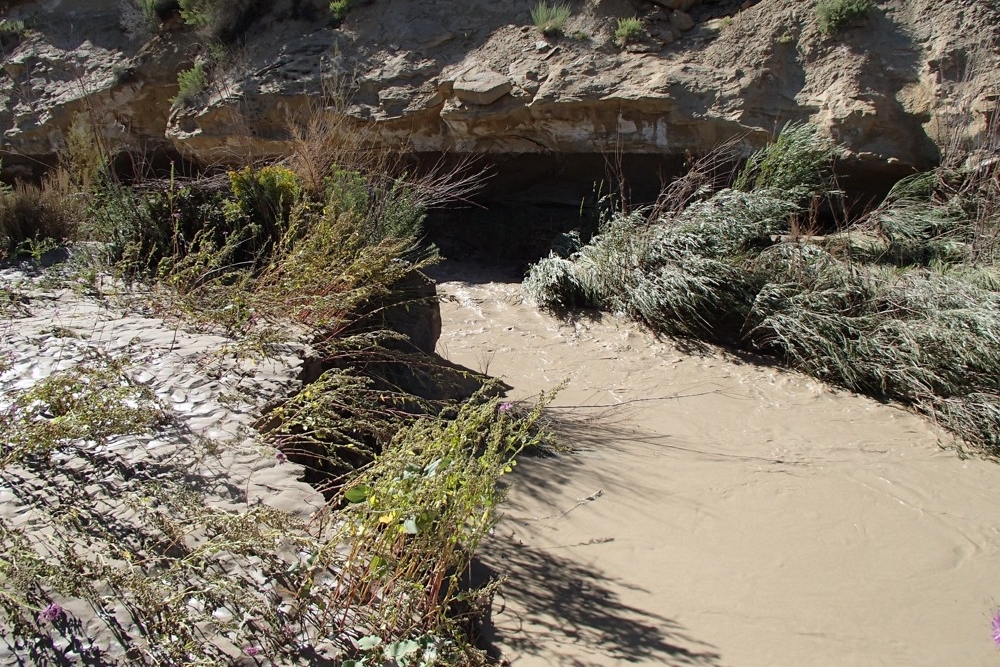 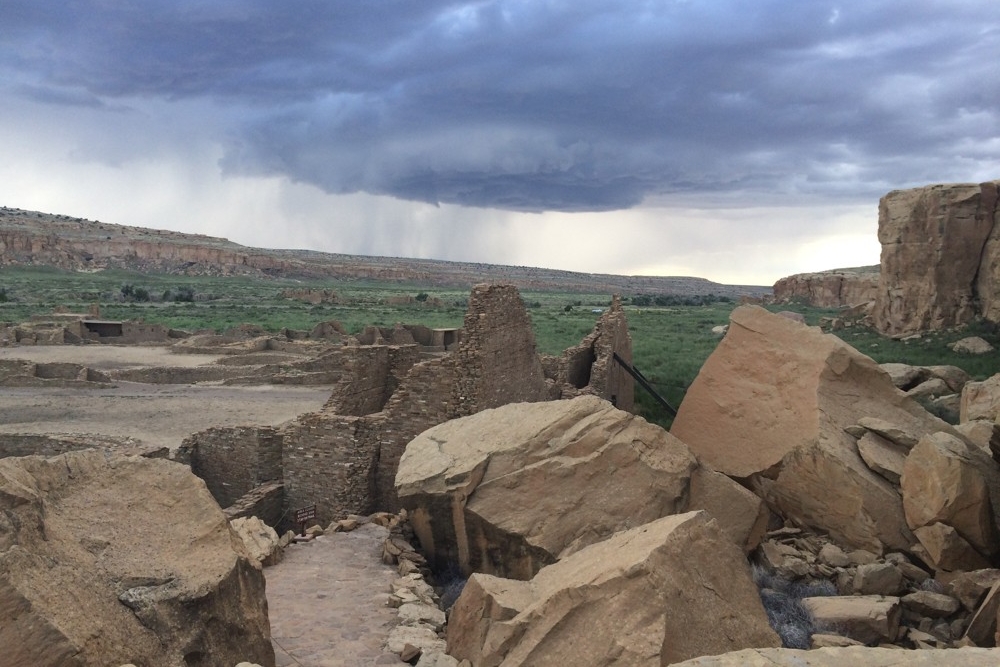 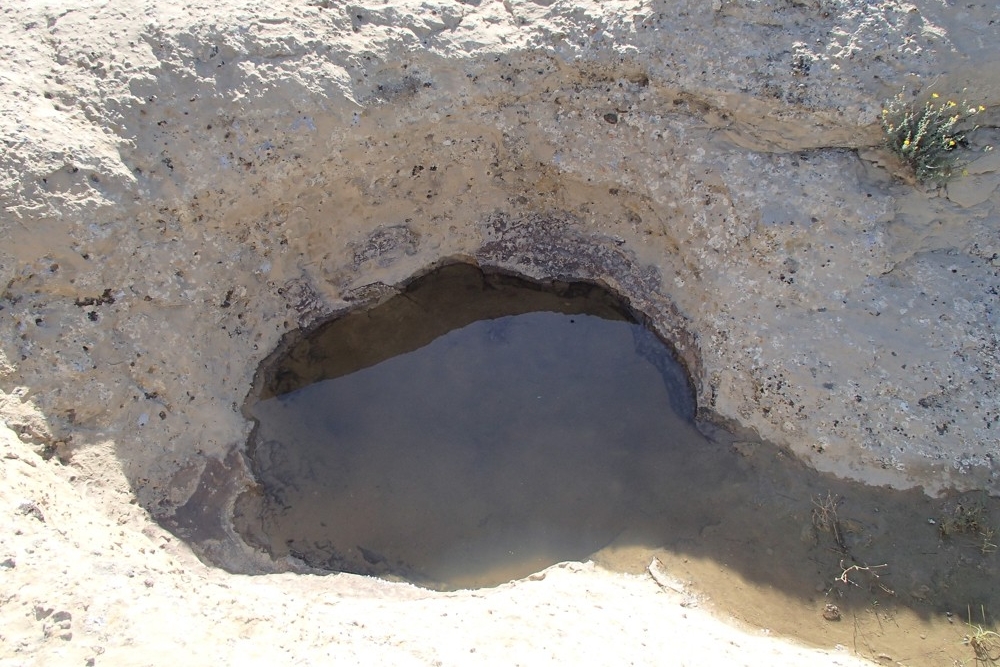