Trivia quiz about the University of Cincinnati 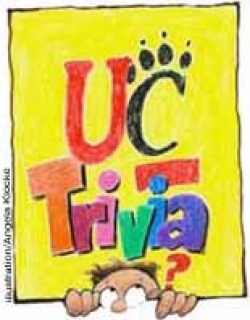 WHILE NOTHING IS TRIVIAL about the University of Cincinnati, try your hand at these 25 UC trivia questions. Don't be nervous. We won't record any grades.

If your competitive side is gnawing at you, however, you can keep track of your correct answers as you go along, and we'll whip out the grade book at the end.

1. What are the names of the two stone lions that stand in front of McMicken Hall and are among the most popular symbols of the university?

Answer: 4 -- Mick and Mack have guarded the front lawn of the university since 1904. They are copies of statues that stand in the Loggia del Lanzi in Florence, Italy.

2. Herman Schneider, one of the most important figures in UC history, is best known for what?


Answer: 2 -- Herman Schneider was the founder of co-op education, which allows students to gain valuable work experience while attending college. UC has the oldest and second-largest co-op program in the country. Schneider served as dean of the College of Engineering, then president of the university.

Other choices: UC did open the first McDonald's on a college campus in 1973, but Dean Schneider had passed away decades before that.

3. Which popular television family was conceived by a UC alumnus?

Answer: 1 -- The Waltons. Earl Hamner, CCM ’48, HonDoc ’08, created the series based on his own experiences growing up in Virginia. He also wrote "Twilight Zone" episodes, wrote the screenplay for the original "Charlotte's Web" film and produced the 1980s series "Falcon Crest.

4. UC graduate Charles G. Dawes composed the music to the 1958 hit song, "It's All in the Game." He was also known for all of the following distinctions except one. Which one is bogus?

His death warranted front-page coverage in the New York Times.

5. George Rieveschl, working as a faculty researcher at UC, discovered the world's first antihistamine, which is still in wide use today. The name of that drug is:


Answer: 1 -- George Rieveschl discovered Benadryl while doing research in 1946. The drug continues to be widely used for a number of varied conditions today, and Rieveschl was named to the International Science and Engineering Hall of Fame in 1995.


6. The origins of what government agency can be traced back to UC?

7. To honor UC's academic traditions, a brick from the original McMicken Hall was used in the construction of:


Answer: 4 --Joseph Strauss, Eng 1892, HonDoc 1930, was the visionary designer of the Golden Gate Bridge, an engineering feat that many of his contemporaries thought impossible at the time. Strauss ceremonially placed a McMicken brick in the bridge's south anchorage.

8. Which of the following movies did not film on a UC campus?


Answer: 3 -- "Rain Man" may be the movie most easily identified with Cincinnati's "Hollywood on the Ohio" movie boom of recent years, but it used no UC locations.

9. Legend has it that one of the most prominent figures of the 19th century once read every book within UC's College of Applied Science library in the span of one year. Who was that individual?

Answer: 3 -- While still a young man, Thomas Edison spent a year in Cincinnati as a telegraph operator and spent time reading at the Ohio Mechanics Institute library, the forerunner of the College of Applied Science, which is now the College of Engineering and Applied Science. Statistics show, however, that for him to achieve the feat, he would have needed to average six books a day and know five different languages.

10. Which of the following UC alums has not won a Grammy Award?


Answer: 3 -- David Canary, A&S '60, never won a Grammy, but he did win five Emmy awards and 16 Emmy nominations for playing twins Adam and Stuart Chandler on 664 episodes of "All My Children."

11. UC alum William Howard Taft served as the 27th president of the United States. What other political position did he hold?

Answer: 3 -- Taft is the only person to serve as both U.S. president and chief justice.

12. What musical instrument was invented by UC alum Winston Kock in the 1930s?

13. UC medical researcher Albert Sabin helped save thousands of lives around the world with what accomplishment?

Answer: 1 -- Albert Sabin is known worldwide for developing the oral vaccine to battle polio. From 1939-69, Dr. Sabin was successively associate professor of pediatrics, professor of research pediatrics and Distinguished Service Professor at the  College of Medicine and the Children's Hospital Research Foundation.

14. The UC Medical Library holds the world-record for the most overdue book. How long did it take for the book to be returned?

15. An out-of-the-ordinary occurrence set UC's 1947 homecoming celebration apart from all the others. What was it?

16. The UC men's basketball team holds the NCAA record for the most overtime periods in a single game. How many was it?

17. The University of Cincinnati’ has an annual financial impact on the economy of Ohio that is estimated to be how much?

Answer: 4. $1.52 billion, thereby generating $11.71 for every dollar invested by the State of Ohio. Data from “The Future Starts Here: The Role of Research Universities in Ohio’s Economy” (Appleseed, 2006).

Answer: 4. George Wilson was an Olympic gold medalist in ’64. He played pro ball for Cincinnati, Chicago, Philadelphia, Seattle and Buffalo until 1971.

Other choices: Oscar Robertson, Bus ’60, was on the 1960 U.S. Gold Medal Olympic Team. He was the nation’s leading scorer in each of his three UC varsity seasons, played for the Cincinnati Royals and the Milwaukee Bucks and was named to the national basketball Hall of Fame. Jack Twyman, another NBA Hall of Famer, was UC’s first All-American (1954) and played professionally until 1966 for Rochester and the Cincinnati Royals. Connie Dierking was in the pros until 1971 (Cincinnati, Philadelphia, San Francisco and Syracuse). All four earned MVP and All-American honors at UC.

19. Which TWO black Americans have buildings on UC’s main campus named in their honor?


Answer: 1 and 3. The Edwards Center’s offices and garage were completed in 1992. Turner Residence Hall was dedicated in 2002.

Other choices: The other two people are real, but their buildings are not.


Answer: No. 4. Paul Simon appeared in the Shoemaker Center in 1991. The rest appeared in 1970 in either Wilson Auditorium or the UC Fieldhouse.

21. What is the original title of the University of Cincinnati school song?

Answer: 4. Although “Alma Mater” is the name given to the school song in a 1927 UC songbook, the same tune was called “A Varsity Song” in a 1917 book. Otto Juettner, a native of Germany and an 1888 graduate of the medical college, composed the melody and wrote the lyrics while a student. He also composed Xavier University’s school song while he was an undergraduate there. “Cheer Cincinnati” is the university fight song.

22. UC alumni invented or developed all items on the following list except one. Which one is bogus?

23. What alumni connection is common in the following movies?


Answer: 1. Two alumni were vital to the special effects in all those movies. Charlie Bailey, DAAP '71, was the chief model maker at Kerner Optical and Industrial Light and Magic, handling "E.T." and all the movies listed in duplicate. The rest were in the hands of Debbie Denise, CCM '73, visual effects executive producer and executive VP at Sony Pictures Imageworks (previously head of production at Industrial Light and Magic). Read more about Denise and about Bailey.

Other choices: UC does have alumni composing scores and doing makeup, incuding the following:

24. Alumna Libby Holman was known as the “first great white torch singer” on Broadway and in nightclubs. Which of the following is NOT true about her?

Answer: 4. Holman, A&S ’24, never used a microphone in performances, claiming she didn’t like “anything mechanical.”

25. “Kiss me, my fool!” is a movie line made famous by which of these stars who attended UC:

Now grade yourself, and see how you did.