The very personal side of a world famous UC archaeologist 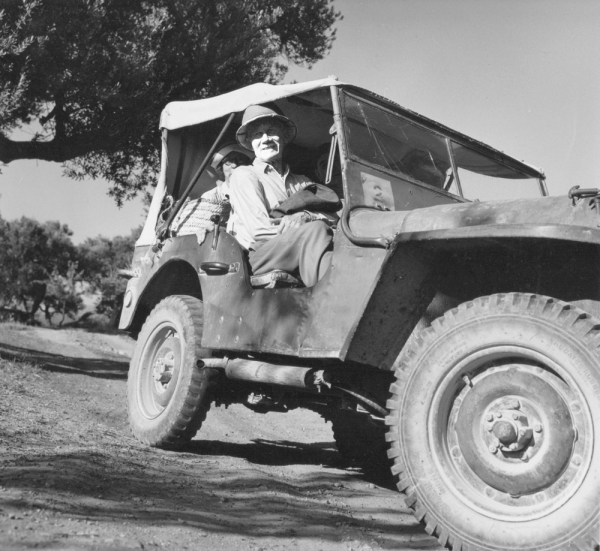 Researchers mine through a ‘treasure trove’ of resources in Cincinnati and Greece to reveal the character, patriotism and unconventional lifestyle of famed American archaeologist Carl William Blegen.

From the 1930s to the 1960s, the discoveries of archaeologist Carl William Blegen made headlines around the world as well as here in the Queen City, where he was on the faculty at the University of Cincinnati. But the personal side of Blegen, publicly revealed for the first time, is the stuff that could be splashed across the celebrity tabloids. 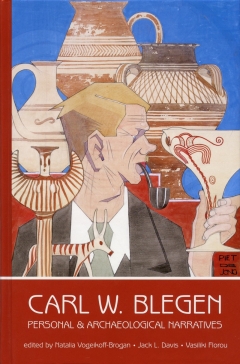 The book, “Carl W. Blegen: Personal & Archaeological Narratives,” is the first biography of the researcher, a revelation of Blegen’s character and personal life that he closely guarded from cameras and reporters. In fact, personal letters, some described as pretty steamy, remained sealed until all involved parties were long deceased.

Published by Lockwood Press, the book is edited by Natalia Vogeikoff-Brogan, the Doreen Canaday Spitzer archivist at the American School of Classical Studies in Athens, Greece; Jack Davis, the Carl W. Blegen professor of Greek archaeology at the University of Cincinnati; and Vasiliki Florou, an independent researcher. Davis has contributed to Blegen’s earlier research, directing excavations in the area of the Palace of Nestor, and served as director of the American School of Classical Studies at Athens from 2007 until 2012.

Blegen’s discoveries at Troy in Turkey and the Palace of Nestor at Pylos in Greece remain two of the 20th century’s most significant archaeological discoveries in Greek prehistory. He led seven annual expeditions to Troy beginning in 1932 – the city made famous in “The Iliad,” Homer’s poem about the Trojan War.

In 1939, Blegen rediscovered the Bronze Age Palace of Nestor, one of the oldest kingdoms in Europe, at nearby Pylos. The palace was the center of the Mycenaean Kingdom. Until Blegen’s discovery, the palace was remembered only through ancient lore for 3,000 years. Blegen’s excavations at the palace in the 1950s and '60s uncovered more than 1,000 now-famous clay tablets containing the oldest records discovered in Europe at that time.

Blegen’s portrait is prominently featured in the lobby of UC’s Blegen Library, which was named after him in 1983. His dark hair is tousled, a pipe is clenched in his closed mouth, and he holds an unwavering gaze at the camera. Only one hand – his right hand – is gloved, which highlights a little-known fact that is revealed in the book.  Growing up in Minnesota, the son of strict Lutheran missionaries who were Norwegian immigrants, Blegen lost part of his right arm in a hunting accident when he was 15 years old. The glove covered up the damage. 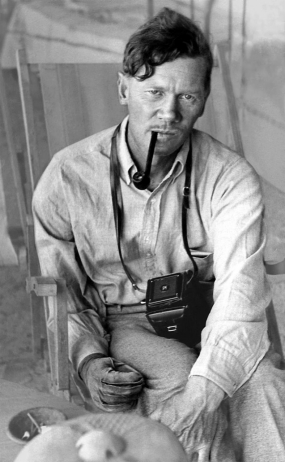 “He had to teach himself to write with his left hand, so his handwriting was pretty awful,” says Davis.

The book also details the complex relationships and living arrangement between Blegen, his wife, archaeologist Elizabeth Pierce Blegen, his best friend and former director of the American School, Bert Hodge Hill, and Hill’s wife, accomplished archaeologist Ida Thallon. Thallon was a mentor, longtime companion and lover of Elizabeth Pierce during their time at Vassar and before her marriage to Blegen.

The relationships involving male-female couples blossomed in Athens while all four researchers eventually came to the American School of Classical Studies. Davis says long, passionate letters reveal when Blegen fell deeply in love with Elizabeth Pierce. He convinced his friend to marry Pierce’s female companion. Letters also detailed a type of contract on how the intimate relationships would continue after the couples were married and living under the same roof, including spelling out that the women would “have private time together,” as detailed in the book.

“Such relationships between young women were not unusual in the early 20th century,” states the book. Both couples married in 1924. The men were both described as heterosexual.

Davis says very few people knew about the marriage arrangement although “it was whispered about.”

“They were forces in society,” Davis says. “They did a great deal of entertaining and were treated as part of the Athenian upper class.”

There was a time when Blegen was a household name in Cincinnati.

Other lesser known facts about the archaeologist included his dedication to rebuilding northern Greece after World War I. Blegen was very active with the Red Cross. “He also played a significant role in the implementation of the Marshall Plan after World War II and the reconstruction of Greece,” says Davis.

Davis says that Blegen also worked with the Office of Strategic Services, a unit that eventually evolved into the Central Intelligence Agency. His service with the OSS involved intelligence gathering by reading newspapers and correspondence.

Other correspondence reveals how the Blegens and the Hills joined in a boycott of the American School of Classical Studies following Bert Hill’s forced resignation from the school by Edward Capps, the chair of the managing committee. The book highlights Ida Hill’s outrage in a letter: “As I never had any training to deal with the insane nor am I accustomed to a sewer such as Capp’s habitat…the filthy slime of that reptile is now smeared all over the School and it will take longer than his lifetime to get it clean again. Lady Macbeth was a parlor pet in comparison.” 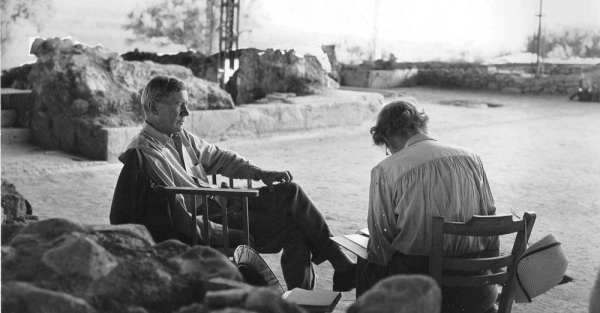 Carl Blegen and UC Archaeologist Marion Rawson sitting in the courtyard to the palace at Pylos, 1961. Photo/Manuel Litran

Davis adds that political fallout was what brought Blegen to the University of Cincinnati. “It was a fight that continued over the next 30 years, the fight involving Blegen’s best friend and the people who were in control of archaeology in Greece.”

Blegen’s ties to the University of Cincinnati were first formed in the early 1920s, as William Semple, the husband of wealthy heiress Louise Taft, formed UC’s Department of Classics, funded by the Taft family fortune. The Taft family newspaper, the Cincinnati Times-Star, would publicize UC’s archaeological endeavors and Blegen’s discoveries.

The book also reveals different descriptions of Blegen’s character ranging from sensitive to rather tyrannical when working with associates. “One person who had worked with his wife after she had a stroke mentioned how tender he was with her,” Davis says. Blegen finished the excavation at Pylos following her death in 1966.

Davis explains how such a personal book about Blegen came about, after he’s been deceased for more than 40 years.

“I think the point we’re trying to make with the book is that it’s difficult to understand the course of any scientist’s contributions to science without understanding the social and political areas in which that scientist is embedded,” says Davis. “That may even be truer for archaeologists, because they spend so much of their life in foreign countries.

“That really gives the archaeologists the choice of isolating themselves in a foreign country or integrating themselves in a foreign country, and for someone like Blegen who made the choice of integrating himself and becoming a part of Greece, I think he was very successful. He made major contributions to Greece as well as to the U.S. and to archaeology.”

Davis points out that Blegen’s work placed UC among the world leaders in archaeology.

“Blegen found the palace and pushed the history of the Greek language back 1,000 years, and UC is still there,” says Davis. “Cincinnati has been there since 1939, and Cincinnati is one of the most famous names in Greek archaeology.” 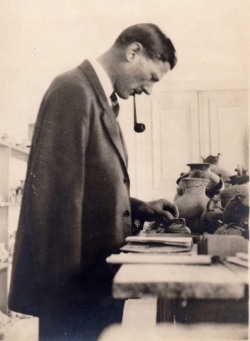 Blegen was the recipient of the first gold medal for distinguished archaeological achievement awarded by the Archaeological Institute of America in 1965. The honor also made him the first American to be recognized by the institute for his contributions.

Blegen was appointed head of the UC Classics Department in 1950 and retired from UC in 1957. He died in 1971 at the age of 84. The Semple Classics Fund, a generous $3 million endowment from Louise Taft Semple in 1961, continues to support research out of the UC Department of Classics.

UC’s Carl W. Blegen Library, first dedicated in 1930 and renamed after the archaeologist in 1983, is itself one of Cincinnati’s hidden architectural gems. The Art-Deco library houses UC’s Department of Classics and the Archives and Rare Books Library. 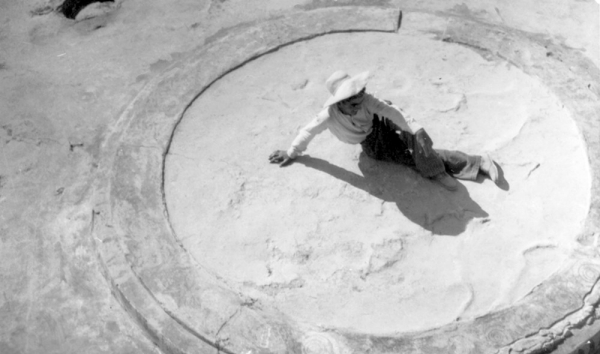 UC Archaeologist Marion Rawson cleaning the hearth in the Throne Room of the palace. 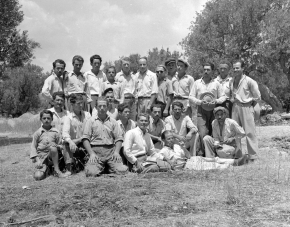 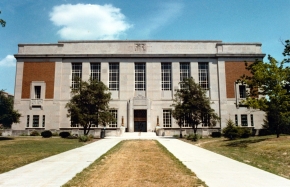 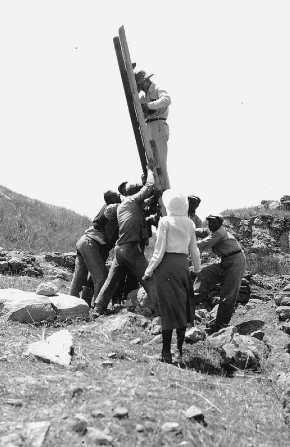 Blegen on the ladder, taking an overhead photograph of an excavated area. Photo/UC Classics Department Archives