Where do toy designers get their ideas? 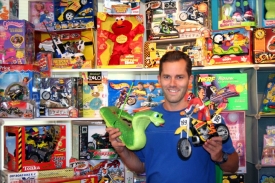 Just in time for the holidays, a few University of Cincinnati graduates and entrepreneurial designers share some of the stories behind their favorite creations.

Most creative types have that ‘Eureka!’ moment -- a flash of genius preceded by a mental impasse. For toy designer Mike Hoeting, DAAP ’89, that pristine moment of clarity is much more than just ‘Aha.’ It starts with excitement, and then extreme paranoia immediately sets in. Fear morphs into panic as he dives into hours of research to make sure someone else didn’t come up with the design first and so no one does.

Perhaps Hoeting’s love for design came from his desire to develop radio-controlled airplanes during high school. He was always very interested in art, design and building. During his junior year in high school, he was having difficulty deciding on a possible college degree between architecture, mechanical engineering, commercial art and graphic design. It wasn’t until his father picked up a flyer from the University of Cincinnati College of Design, Architecture, Art and Planning that Hoeting realized what he wanted to do: industrial design.

“I didn’t know about industrial design,” he says. “It’s not marketed and understood as well as architecture and graphic design. But I read the program description, and I knew it was exactly what I wanted to do. It was the perfect blend of art and engineering.”

Shortly after graduation, Hoeting moved to Chicago and began working on the toy inventing side of design. After two years of hard work and a mental battle between staying in Chicago or moving back to Cincinnati to start his own toy-design company, he chose the Queen City. He co-founded a company with fellow UC alumnus Sean Mullaney, DAAP ’89, in 1991-- Bang Zoom Design -- and he’s been in the toy designing business ever since.

Currently the president of Bang Zoom Design, Hoeting has been designing toys for more than 20 years. Although he keeps his home and work lives separate, he plays a two-headed mastermind at the studio. When he’s not handling administrative and business issues, managing his eight designers, meeting deadlines or taking care of anything that requires management, he focuses on what he does best: design.

“Instinctually, I am 80 percent a designer,” he says. “I’m afraid if I don’t do enough (designing), my job wouldn’t be that interesting or fun.” And Hoeting has done plenty of designing -- he has more than a dozen toy patents attached to his name.

Which toy is his favorite? The RC Xtreme Cycle made by Tyco, owned by Mattel and designed by Hoeting. “When I was a child, the Evil Kenevil motorcycle was my favorite toy, but I had always wished it was remote controlled,” he says. “I always wanted to take it off ramps, make it jump and drive it around. It was a dream of mine to (design) a toy that did that.”

Luckily for Hoeting, his dream was patentable after he spent close to a year nurturing and exploring the idea and then prototyping it.

Often times it’s hard to develop a toy that creates a TV moment – something so different and unique that it communicates a “Wow” factor in a matter of seconds. Hoeting has to be creative not only in the design itself, but marketing the design as well. Engineering is considered in the development process -- not just how the toy is styled, but how it’s actually made.

Hoeting follows trends and is involved in a lot of back and forth with manufacturers and retailers to see if designs are appropriate for the market.  Retailers are asking for toys that are trend related, like Harry Potter and Justin Beiber.

As far as inspiration goes, Hoeting doesn’t have any children to give him ideas. Much of his ideas he creates himself -- a way to please his inner child.

Long after his children have tucked themselves in and fallen sleep, Sean Mullaney, DAAP ’89, tiptoes quietly into their rooms and takes a few of their toys off the shelves. He hides them in his own room until the morning and takes the thieved prisoners to his design studio for prototype ideas and research.

Although he snatches toys in the middle of the night, there is a method to this toy designer’s madness. “I’ll buy a lot of toys that I need to research on or use parts for,” he says. “I’ve used parts from a lot of (my children’s) toys. I get all the good stuff.” He eventually sneaks the stolen toys back home and helps his kids create toy inventions of their own.

Design is something Mullaney has been doing for as long as he can remember — before he was using his children’s toys as inspiration and even before he attended college.

After graduating from the University of Cincinnati College of Art, Architecture, Design and Planning, Mullaney moved to Chicago to work for Big Monster Toys, a toy and game inventing company. He was there until 1991 when he decided to move back to Cincinnati to start a toy-design company, Bang Zoom Design, with fellow UC alumnus Mike Hoeting, DAAP ’89. Mullaney left the company in 2002 but continued designing toys.

In 2003, Mullany opened Toy Lab, a store where children and families could invent their own toys from a massive selection of recycled toy parts. After spending a year at Toy Lab, he packed up and moved to Paris. When he started to get the itch for designing again, he started working on toys and games and eventually returned to the Queen City nearly a year later for a second time to create his latest company -- Quiggie Design.

During a typical day at the studio, the jack-of-all-trades throws ideas around with his colleagues to get inspiration for new designs for toys and games.

“If something seems viable, we work on a quick prototype or mock it up on the board and play with it,” he says. But Mullaney focuses on more than just design. He does a little bit of everything, including administrative tasks, such as contract work with manufacturers and retailers. In the end, he’s responsible for paying the bills, scheduling meetings and making sure the firm meets deadlines.

When Mullaney does get time to focus on design, however, he spends two to three weeks working on a prototype. “There’s no set rulebook (for how design works),” he says. “It starts with an idea then making a quick sketch. I like to go to prototype or model quickly. In the business, you really have to prove (that you can).”

And Mullaney has definitely proved himself in the field. He has more than two-dozen patents attached to his name since he began at Bang Zoom Design, and he hopes to continue to design toys that are appropriate for the market.

His favorite toy? He can’t say, because it hasn’t hit the market yet. But he does stick to one principle when he designs: “I like games and toys that are hands-on,” he says. “They encourage interaction between family members and friends. They encourage kids to go outside and play rather than sitting (and playing video games).”

Tim Conroy, DAAP '86, conducts intellectually lucrative meetings at his dining room table every week. He sits quietly and asks his 9-year-old son the one question every toy designer wants to know: What do kids really want?

“He’s the perfect age where I can sit down and talk to him about things that are going on,” he says. “He gives me his thoughts on what else we could (design). He’s old enough, but not too old that he’s uninterested. It’s a very narrow window.”

Conroy’s ability to tap into his son for inspiration has helped him add to a large portfolio of work that was created long before he was even enrolled in the ninth grade.

“(Design) was just kind of what I always did,” he says. “Even before I got to high school, I decided on industrial design. I worked on (three-dimensional) sculpting, woodcarving and building assemblages. I always liked that process.”

Conroy’s love and passion for design led him to the University of Cincinnati’s College of Design, Architecture, Art and Planning and eventually into toy design. He spent 12 years working with Kenner Toys after graduation and then started his own company in Cincinnati, Sculpco, in 1997.

When Conroy can’t reference his son for inspiration and action-figure designs, he turns to his colleagues -- a pool of talented designers -- for a different point of view.

“(Inspiration) isn’t like a faucet that you can turn on and off,” he says. “Some days you tap into it more than others. It’s always a problem instantly having inspiration. The best thing for that is getting involved with different things. Change of perspective brings something around. You find ways to look at it in someone else’s eyes.”

But Conroy’s job is more than just looking for inspiration. He balances much of his time at the studio between being the president and a designer.

“To sit and sculpt, (I’m) productive by having long uninterrupted time to work on something,” he says. “But when (I’m) running a company, it’s the exact opposite. There are two-dozen things that need to be addressed. I have to find time to be creative and inter mingle that with all the little things.”

When he is designing, sometimes a prototype can take up to two or three weeks to be finished, and Conroy runs into designer’s block. Another way he gets inspiration is by taking a photograph of what he’s working on and viewing it on a computer. He is able to rotate the figure so he can see it from different angles, and he’s able to see the design in a new light.

Although Conroy has toys everywhere in his house because of his son, the toys aren’t any of the ones he designed. He does give his son some of the prototypes he created, but he doesn’t like to showcase his work at home. He prefers his home to be a place where he can go to focus on something else other than design, toys and games, a place where he can clear his mind. But that doesn’t mean Conroy doesn’t have favorite toys of his own that he’s designed from scratch.

“My favorites are the toys that never actually came out, which did have something to do with them (being my favorite),” he said. “I always root for the underdog that never hits the shelf.”

Jayna Barker is a senior journalism student at UC and an intern with "UC Magazine."