Locked in a narrow storage space, deep within the winding corridors of UC's Laurence Hall exists a room full of irreplaceable treasures, a gold mine of Bearcat football memories.

Taking up nearly every square inch of wall space inside the closet-like area are more than 1,500 neatly stacked and dated metal canisters. Each holds a reel of 16 mm film -- the moving images of UC football from the last half century.

The program boasts no more valuable historical resource than the contents of each tarnished tin container: From Jim O'Brien's last-second field goal to Greg Cook's amazing senior year to Reggie Taylor's record-setting rushes. It's all there, reel after reel, stack after stack, highlights from the likes of Ken Byers, Dick Goist, Joe Morrison and Gene Rossi.

The entire library of film is a testament to Sid Gillman, UC's legendary coach during one of the top eras of Cincinnati football history, 1949-54, in which he directed the Bearcats to three Mid-American Conference titles and two bowl games. He earned wall space in both the College and National Football League halls of fame and is considered a master of the modern passing game.

In fact, he and Paul Brown are credited as the first to really "break up" film. Armed with a pair of scissors and a reel of 16 mm, the focused competitor cut and spliced game films to analyze a team's every approach to on-field situations. Gillman's crude film editing allowed him to group and study specific offensive maneuvers and defensive sets, an innovative game plan at the time.

Squinting through the night behind his projector, he scrutinized a club's movies until he could anticipate their mistakes and manipulate their vulnerabilities. Gillman insisted the cameras roll at every practice and graded players based on the developed evidence. 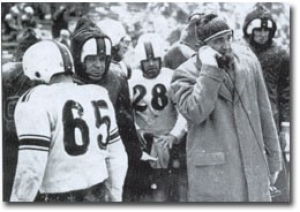 Sid Gillman was more than a fierce competitor when he paced the sidelines of Nippert Stadium from 1949-54. His innovations, particularly his study of film, helped revolutionize the game.

UC football Hall-of-Famer Jim Kelly Sr., Ed '51, Med '65, says coach Sid Gillman, was a "filmaholic." "He was always watching film," Kelly recalls. "He was an innovator. At his home down there in Clifton behind the hospital, the third floor was all his study room for film."

Esther Gillman joked that her husband was always a bit of a movie buff. "During our honeymoon in 1935, Sid bought a projector for $15 at a pawn shop," she recalls. "He was only going to make $1,800 that year (his first coaching job), and we couldnít afford it. I thought I would kill him."

The fact that Gillman spent nearly half a week's paycheck on a projector proved he would go to excruciating lengths to gain a competitive edge. At times, however, he perhaps went too far. Glenn Sample, Ed '53, remembers his coach using film to such a degree that the NCAA ruled he was affording his team an unfair advantage.

The practice in question? Gillman had the first-quarter game film rushed to a Vine Street studio where it was developed and returned to the locker room by half time for a brief critique. Though modern video technology would make the logistics of half-time films simple, the NCAA still forbids it.

"It was nothing like it is today as far as tapes," Sample says. "They had to actually go over and run it through this big machine to develop it and then thread the projector."

Yet Gillman didn't just use film to win games. He used it to win over fans. When he would speak during Bearcat boosters meetings at one of the posh downtown hotels, he brought his projector. He even started a regular campus attraction at Tangeman University Center to let students watch that week's game film, a personal picture show of the team in action.

"We would have hundreds and hundreds of students," Sample exclaims. "This was before television broadcasted our games. The student body wanted to see this stuff in slow motion. It was great P.R."

After his success at UC, Gillman leaped to the Los Angeles Rams, winning a division title in his first year. He stayed with the Rams from 1955-59 and spent the next decade with the San Diego Chargers. He served as a consultant to teams for much of the '70s and joined the Philadelphia Eagles as their quarterback coach in 1979, helping them to the Super Bowl in '80.

Asked soon after he retired what he considered the biggest change in football, Gillman replied: "Game films. You couldn't coach today without them. Studying films is the most important thing a coach can do."