"University of Cincinnati Horizons" magazine encourages readers to submit letters. Letters submitted online may be considered for publication here and in the print edition of the magazine.

How many classrooms at UC currently use standard blackboards, chalk and erasers? How many use electronic-technology-based devices? [Story in April ’04 issue] Has a measure of the effectiveness of each in achieving teaching goals been determined? Or is that of interest or concern?

Editor’s note: UC’s ever-growing number of electronic classrooms will probably hit 200 shortly. All of those rooms also have traditional blackboards, chalk and erasers.

Some professors find it unnecessary to use electronic classrooms, yet others find it valuable to have greater variety in information delivery. No one tells the professors that they must use one or the other.

The professors who use electronic classrooms are surveyed several times a year as to what tools proved helpful and effective for their students. The experienced professors who have used both the older and newer teaching aids are considered the experts in these instances.

I am reading, with interest, the September 2004 issue of “Cincinnati Horizons” magazine and am appalled to read about the huge skylight that has been erected as a roof on TUC. As the retired (1987) director of Campus Planning and Construction (now titled university architect), I can imagine Jim Wenner, former director of physical plant, turning over in his grave. For years, the university had leakage problems with skylights, and as a result, most, if not all, were covered with metal.

Although the university’s “Instructions to Architects and Engineers” clearly stated that skylights were not to be used, I read that the skylight dome on Van Wormer (administration building) is being restored. The reason it was removed was leakage.

Possibly skylight technology has changed in the past 16 years. If it hasn’t, the university can look forward to removing or covering those skylights within the next few years. History does repeat itself. 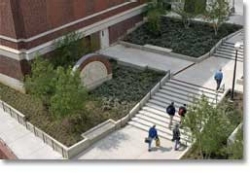 If the white door on page 21 [of the September issue, is on Baldwin Hall, then in 1938, my locker and others were inside. How’s that for “whimsical salvage”?

Editor’s note: I almost wish it were because that’s such a cute line, but, alas, the door is on Swift Hall. Perhaps someone else knows what used to lie beyond that door, as well.

I just received my copy of the September “Cincinnati Horizons,” and I wanted to congratulate the staff on their international award. It is certainly well deserved.

Every time I receive a copy of the magazine, I am impressed by the quality and effectiveness of all the features. Over the years in which I worked with the editor, it was obvious that her leadership was developing a very effective means of UC communication that all profit from.

This magazine’s comprehensive report on the current status of the Campus Master Plan took a complex vision and through visuals and words made it understandable and exciting. I also enjoyed the article on Earl Hamner, which was another example of the many times you have produced outstanding features on CCM.

Earl is truly a gentleman. When CCM made its first promotional video several years ago, he willingly provided all the “voice over” narration -- pro bono. That immediately gave it a stature we could not have obtained in any other way.

Keep up the good work as I know you will become the most effective communicator of UC|21.

You do a great job with the “Cincinnati Horizons” magazine. I always read it cover to cover, as the articles are so interesting and well written. It is much better than the magazine from Purdue (my husband’s alma mater), and he agrees, as well!

I want to congratulate you on a beautiful, professional, and well-written magazine. If there is anything I retained from my five years at DAAP, it is a good design sense. And I can tell you that “Cincinnati Horizons” is one of the most quality-produced periodicals I have seen. Thank you for making us all proud.

I just read the article on the traditions of the UC Band [April ’04 magazine]. As a former band member and a current member of the UC Alumni Band, I wanted to add some information. The tradition of tapping fellow bandmates on the chest for good luck before a performance was originally to tap on the Bearcat; since the image of the Bearcat was on the front of the uniforms, that’s where we tapped. The uniforms have changed over the years, but the tradition still stands.

My husband, Alan Brody, was in the political sciences graduate studies program in 1991 and completed his orals and written exams in ’93 for his doctorate. The Graduate Handbook at that time stated that if you completed your orals and written exams you were to automatically receive your master’s degree. He didn’t receive his master’s until this year.

We would love to secure a copy of the Graduate Student Handbook from that time, but one cannot be located. Do any of your readers have one?

Letters to the Editor policy
Letters to the Editor must relate to the university, be signed and include addresses, colleges and years of graduation, when applicable. The editor reserves the right to edit letters for length, clarity or factual accuracy and to reject letters of unsuitable content. Letters may not criticize other letter writers. Opinions expressed do not necessarily reflect the views of the University of Cincinnati.

Submit a letter to the editor