Is Mick the lion on the left or the right?

UC's most beloved statuary celebrate its first 100 years on post at McMicken Hall.

The leonine guardians at the entrance of McMicken Hall have been both physical and cultural symbols of the University of Cincinnati for 100 years, a full century of watching over the Clifton Avenue side of campus. But which one is which? 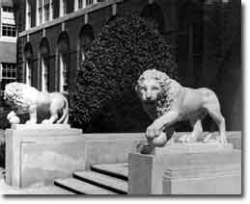 In fact, when UC acquired the lions in 1904, they were positioned looking toward each other. So which was Mick then? Or Mack? And how were they situated in their original location?

That original site is part of the story of the lions. In 1904, the city of Cincinnati notified the university that the lions were UC's for the asking. Shortly thereafter, the statues arrived on campus and were placed in front of the main academic building.

The pair of lions previously had graced the estate of Jacob Hoffner, a wealthy real estate developer who lived in the Cumminsville neighborhood. Hoffner was a rather mysterious figure, little-known and little-remembered, but his estate was noted for its elaborate gardens and statuary, both inside and outside the home.

When Hoffner died of pneumonia in 1894 at the age of 96, he bequeathed everything to his wife, Maria. According to his will, Maria was to receive an annuity, and upon her death, the inside art and statuary were to go to the Cincinnati Museum Association and the exterior art, including the lions, was bequeathed to the city of Cincinnati, either to be placed in Washington Park downtown or located elsewhere as city council saw fit.

Maria Hoffner died in 1901, and since UC was a municipal university at the time, the campus was considered an appropriate venue.

Mick and Mack are replicas of a famous pair of lions found in the Loggia dei Lanzi in Florence, which was constructed in 1382. Jacob Hoffner supposedly was a traveler of some repute, and many of his artworks were copies he had commissioned of the notable pieces he viewed abroad. Visiting the beautiful Italian piazza, which is a virtual open-air museum, Hoffner saw the lions and wanted smaller copies made for his Cincinnati gardens.

Even one of the Florentine "originals" was, in fact, a copy. The lions were moved from Rome to Florence in 1788. While the true original (Mick or Mack?) dates to ancient Rome, its twin was carved in 1600 by sculptor Flaminio Vacca. 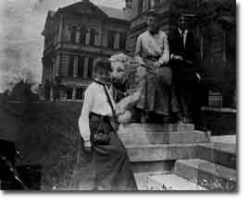 In 1905, UC students pose with one of the recently installed lions. Notice that the feline sentry faced toward the steps at that time, not away.

As the decades passed, the Cincinnati lions became a strong part of the university's identity. Students from rival schools (you know the ones!) painted them red or blue on the eves of important football and basketball games.

The tails have been broken off, replaced and then broken off again, to the point where molds are kept by the university in order to fashion new tails when needed. Students have posed for pictures with Mick and Mack, and often the pert red outline from a lipsticked kiss can be found on them.

It is said, too, that Mick and Mack will come to life and roar whenever a virgin passes by. That they have remained silent probably does not speak as much about UC's student body as it does about a venerable campus tradition found across America in one form or another.

Today, UC students traveling in Italy often find themselves in the Loggia dei Lanzi, posing next to the larger ancestors of Mick and Mack. As for Jacob Hoffner, he is buried in the family plot at Spring Grove Cemetery. A steep hill leads to steps below the gravesite, and on each side are beautifully carved lions in repose.

The Mick and Mack urban legend

More about the Loggia dei Lanzi

Images of sculpture at the Loggia dei Lanzi