Mechanical engineering students at the University of Cincinnati in 1983 named this sleek white vehicle "Pegasus" after the winged horse of Greek mythology. While it never took to the air, the ultralight transport did reach a top (downhill) speed of 52 mph -- all without horsepower. The engine behind this bicycle-chassis car was literally the four-student crew.

The student-designed and -built Pegasus took first place at an engineering conference in Detroit, then won two distance races at an Indianapolis international competition.

Next, three teams of four riders took Pegasus on a two-day road trip from Cleveland to Cincinnati, each pedaling two hours at a time. Unusually rainy and windy November weather and a wheel failure that required trucking Pegasus part of the way home were temporary disappointments. The Pegasus team made the last leg of the trip back to campus before the end of the second day, tired but pleased with what they had accomplished. 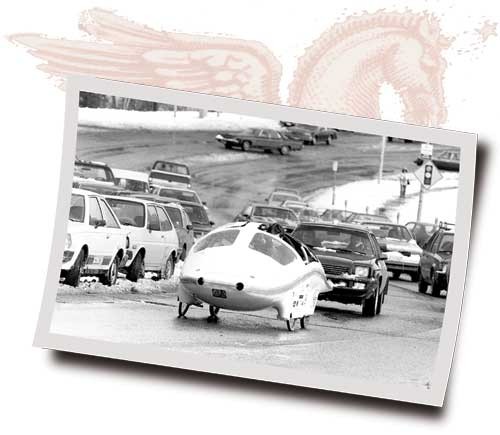 A personal account of the Pegasus win at Indy