Free or very good deals at the University of Cincinnati

Here are some “insider tips,” especially useful when planning your next visit to the UC campus. Some things are free, others are exceptional values, and all are too good to keep to ourselves. 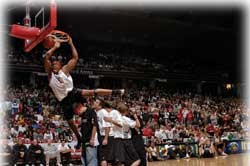 The biggest Bearcat rally of them all, Skyline Chili Midnight Madness, happens on the eve of the basketball team’s first permitted Division 1 practice each October.

The Fifth Third Arena at the Shoe opens at 10 p.m. and begins throbbing with anticipation as fans gather to see their favorite men’s and women’s team players, and to say hello at an autograph session.

Among the evening’s traditional events are slam-dunk and chili-eating contests, an exhibition of athletic skills, music by the UC Band, entertainment by the cheerleaders and dance team, free admission and free parking.

Mere seconds after midnight -- the first allowable moment -- the men’s team conducts the new season’s first practice scrimmage. That’s when fans start sizing up which players are most likely to move the Cats to the Final Four.

Want to see quality musical or theater performances for free? Check with the College-Conservatory of Music. Their calendar lists about 900 opportunities every academic year -- instrumental, symphonic, choral, compositional, theater, drama and opera -- starring students, distinguished faculty and visiting artists. Springtime is the busiest season, with as many as 10 performances a day.

Although Cincinnati knows CCM best for its impressive Mainstage Series and is happy to pay a modest $27 for top tickets, the college also offers a free theater series in the Cohen Family Studio’s venue. Limited seating requires reservations, so be sure to call the box office at noon on the Monday before each opening (513-556-4183).

Scheduled for the Studio Series in ‘05 are two dramas, two musicals and three operas.

For a refreshing sample of the current music scene, listen to UC’s free online student-run Internet radio station, Bearcast. Streaming a range of music from rock and hip-hop to world beat and local tunes, the station is a training ground for those interested in all phases of radio -- promotion, music direction, production, business -- and its inventive student disk jockeys are recruited from a larger pool than CCM’s Electronic Media program.

Bearcast is heard live seven days a week, emanating from the Jack and Joan Strader Studio in the College-Conservatory of Music

Find this trail to fitness

Begin at the beginning, the end or in the middle of the Bearcat Fitness Trail, but complete the entire course if you can. As it crosses East and West Campuses, the trail includes 15 exercise routines and 1.4 miles of walking or jogging designed to provide both cardiovascular and skeletal muscle conditioning.

Starting at either Wherry Hall or the Teachers College terminus, exercisers follow station signs that illustrate log hops, body curls, chin-ups, sit-ups, bench dips, leg raises and a variety of stretches. Those just beginning a fitness regime may find comfort in knowing that “help” phones, drinking fountains and fitness trail maps are available along the route. The trail is sponsored by the university’s Quality Service Initiative and Department of Human Resources. 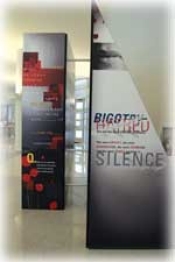 Each June, the College of Design, Architecture, Art, and Planning hosts DAAPworks, an exhibit of final projects by its talented graduating class. Among these are ceramics, drawings, electronic art, paintings, photography, printmaking, sculpture and a full range of design projects -- architectural to urban, digital to interior, product to transportation. The week-long event at the DAAP complex is free, with a June 7 opening-night picnic on the plaza for just $5.

Fashion design students will soon begin planning their 54th annual runway show for June 11. General admission to the scholarship benefit is $35, with donor tickets at $150. For those who can’t make it to Milan or New York, it’s a bargain. Call 513-556-1376 for details.

Much of society benefits from the work of UC law students. This year, for example, marks the beginning of a new Domestic Violence Clinic created by the College of Law in partnership with the Legal Aid Society of Greater Cincinnati.

The university has been offering informal, low-cost non-credit classes for more than 50 years. Scores of options appear in each quarterly Communiversity catalogue, including how to do a home inspection, learning to play the harmonica, tips on managing a small business and ideas for landscaping. Check out www.ed2go.com/uc for listings, locations and costs. Many are free to those 65 and older.

Manager Donna Burns reports that some classes are perennial favorites:

Five years ago, Communiversity added online classes and now has more than 100 titles in that category. Some of them are accounting fundamentals, digital photography, genealogy and PhotoShop. 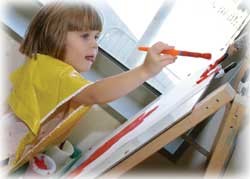 UC has a nationally recognized campus preschool, the Arlitt Child Development Center, offering 3- to 5-year-olds an opportunity to learn side by side with peers from other cultures, races and socioeconomic levels, as well as those with developmental needs. In a setting where children are guided to “construct” their knowledge about the world, all are encouraged to express feelings, make decisions, develop problem-solving skills and become creative thinkers.

Arlitt’s reputation recently attracted a $760,000 grant from the Ohio Department of Education. Funding will support development of a statewide curriculum for early childhood education for children aged 3 to third grade.

Let’s go to the movies

Seeing movies before they hit the video stores in a comfortable $2 stadium seat is hard to beat. And that’s what the new MainStreet Cinema offers. When first-run movies come to the cinema, they still cost $2 or $3 less than off-campus ticket prices. Some films are free.

Last fall, the line-up included “Troy,” “The Manchurian Candidate,” “The Lord of the Rings” trilogy and all three “Matrix” films. In cooperation with Student Government, the theater also hosted live screenings of the presidential and vice presidential election debates. 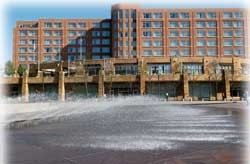 Need an overnight escape from suburbia? A weekend get-away? The Kingsgate Marriott on East Campus invites you to book a room on Friday or Saturday for $99 a night, when available.

The well-appointed hotel is within walking distance of CCM performances, MainStreet attractions, sports events and the sculpture gardens that complement UC’s signature architecture.

Marriott amenities include a fitness center, gift shop, plasma TV in the Bearcat Lounge and continental cuisine at the Caminetto bistro. Rooms have complimentary coffee and free high-speed Internet access, with two dataports for simultaneous phone/computer use. 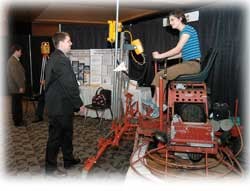 Tech Expo, the College of Applied Science senior design show, takes over the Cincinnati Convention Center ballroom for a weekend each May. On display are imaginative products created through chemical technology, construction management and five areas of engineering technology -- architectural, computer, electrical, information and mechanical.

Seen at the 2004 expo were a tool to scan the inside of walls, an enhanced version of computer checkers, a paintball stat collector, bass pedals for a MIDI keyboard, a CD-ROM educational set for young children, a wheelchair anti-tipping device, a cat litter disposal/storage system, a garage-door impact test cannon and a supercharger kit for ‘82-92 Camaros and Firebirds.

Some inventions make it to product development. Some simply give corporations a new way of looking at things. Yet you can grab a sneak peek of the future for free. This year’s Expo will be Friday, May 20. 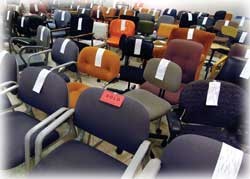 When UC offices replace worn out desks or copiers, those items don’t get tossed. They move on to the Surplus Equipment Department, where manager Lee Leviton prepares file drawers, chairs, coat racks, calculators, computers and printers for future owners.

Every Thursday, the ever-changing inventory goes on sale to the public, with each item priced “as is,” all sales final and shoppers arranging their own delivery. A one-day half-price sale in October draws as many as 700 bargain hunters.

After the clearance event, everything that remains is offered to United Way and Community Shares agencies at no charge. “We’ve been doing that for years,” says Leviton, whose office number is 513-556-5654.

From Starbucks to NY strip

Choices for nourishing the inner man or woman have multiplied greatly on campus in the last several months -- from popular fast-food vendors along MainStreet to finer cuisine. Here are a few tips that may make your next visit to UC more flavorful.

The best-selling brew at the Starbuck’s in the Steger Student Life Center is the dark-roast drip coffee; visit early or be disappointed. Starbuck’s also sells gourmet sandwiches, fancy desserts and big tasty salads.

Mick and Mack’s Contemporary Cafe in TUC offers table service and more upscale fare, including sun dried tomato pesto pasta, grilled catfish with mango salsa and char-grilled New York strip steak, any of these accompanied by a nice glass of wine or beer. In fact, the cafe has initiated a wine tasting club that meets monthly.

The Kingsgate Marriott restaurant has been reborn as the Caminetto, a Euro-American bistro. It offers oven-fired pizzas, such as the duck sausage, shitake mushroom, caramelized leeks and Fontina cheese favorite. Among pasta selections is the cannelloni with smoked chicken, spinach and mushrooms with Alouette cheese. Popular entrees include pan-seared snapper, veal scaloppini Marsala and oven-roasted vegetables with saffron couscous. 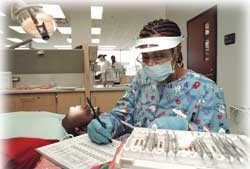 You may know someone who needs the inexpensive dental hygiene services offered at Raymond Walters College. Cleaning, X-rays and sealants are available from supervised second-year students eager to polish their professional skills in the state-of-the-art clinic. Cleanings are $2 for seniors, $10 for others. Sealants for children cost $3 each. X-rays are $7 to $10.

Because this is a teaching clinic, there are some cautions: Appointments can last from two to four hours, services are available only during the academic year, and no dental restorations are provided. Lastly, potential clients must apply and be accepted as patients. Call 513-745-5630 for more information.