May 2006
Illustrating the Value of Books

He stops short of calling "legalese" un-American, but Judge Mark Painter, A&S '70, JD '73, is relentless in his advocacy for legal documents everyone can understand. 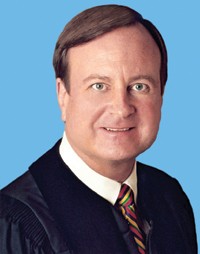 "Cases involve real people," he asserts. "Shouldn't they be able to read what is happening to them?" He urges colleagues to tell the court "why you should win -- not just in dry legal terms, but in language that brings alive the human issues."

Painter, who has served on the Ohio First District Court of Appeals since 1994, urges fellow judges and lawyers to use clearer ideas, shorter sentences and more direct English. He spreads the message in seminars around the country and in his often-humorous book, "The Legal Writer."

Now in its third edition, the Ohio jurist's work has sold more than 5,000 copies nationwide. "The book grew out of my seminars on plain English," Painter explains. "I had so much material to distribute that it made sense to turn it into book form."

Subtitled "30 Rules for the Art of Legal Writing" when published in 2002, the book now has 10 additional tips. They include: limit adjectives, adverbs and Latin phrases; use shorter sentences and lists for better understanding; and employ time-saving "style" settings in word processing software.

"There has been very little backlash (about simplification) from the profession," the judge observes. "Most lawyers see it as a revelation. The plain language movement is making great progress."

Earlier this year, a quarterly journal dedicated to good legal writing honored a Painter judicial opinion as one of the six best in the nation for 2005. He was the only state judge so honored. The other five were federal judges, one of them Justice Antonin Scalia of the U.S. Supreme Court.

"Lawyers need to see that the luminaries of the profession -- the judges, professors and others on the selection committee -- agree that plain English matters," says Painter, who is recognized as an outstanding legal scholar. More than 330 of his decisions have been published nationally.

A veteran of the Hamilton County Municipal Court for 13 years before state service, the judge teaches advanced legal writing as an adjunct professor in the University of Cincinnati College of Law. His "Ohio Driving Under the Influence Law," now in its 15th edition, is the only textbook on DUI in the state.

In "The Legal Writer," Painter discusses a 1946 example from the Ohio Supreme Court -- a 100-word sentence -- to illustrate the necessity for change. It begins, as follows: 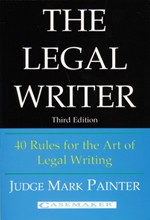 "The appellant complains that the trial court erred in holding that an attorney at law representing a loan association in the distribution of the proceeds of a loan to be made by such association could refuse to answer questions concerning such distribution on the ground that to answer would disclose ... "

Judge Painter points out that this example is not the worst, and that it "could be translated into plain English fairly easily."

"One problem in law school is that we read older cases by dead judges." he notes. "Of course, [some] were great writers, but most judges are not.

"It is not just that many judges write badly. Cases are selected for (law school) casebooks not because they are examples of good writing, or even clarity, but because they illustrate the precepts of law in that course. Even when edited, many of these cases are wordy, redundant and confusing. The inadvertent consequence of reading all this lawspeak and generally bad writing is that it causes the student to internalize it. We think that if judges write this way, then it is the language of the profession -- something to be emulated."

Among the judge's other cautions:

Next | Words of comfort help those who mourn