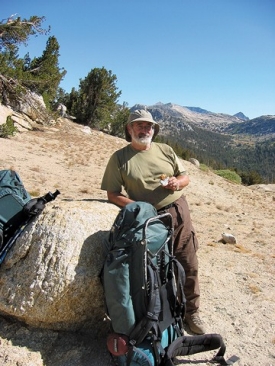 Stan Glantz escapes from the stresses of waging war against tobacco interests by spending weeks-long trips hiking in the mountains. Photo/Marsha Glantz

Stan Glantz has never pulled punches in his fight with big tobacco. And he isn't about to start now.

"I think I'd like to just destroy the tobacco industry," he says bluntly. "It is an industry that kills 5 million people a year. It has no business existing. Make them go do something useful."

While Glantz admits he is far from putting cigarette makers out of business, the 62-year-old professor of medicine and cardiology at the University of California San Francisco has landed his share of blows along the way.

Most damaging among them was his bold move (backed staunchly by UCSF) in 1995 to publish more than 4,000 confidential memos and reports that proved the tobacco industry knew 30 years earlier that nicotine was addictive and smoking caused cancer.

Those secret documents arrived at Glantz's office in an anonymous FedEx package in May of 1994. The return address read simply "Mr. Butts," an apparent reference to the Doonesbury character who tries to talk kids into smoking. Those papers, according to Glantz, proved to be a central element in billions of dollars in successful litigation against the tobacco industry.

Since then, the archive of tobacco-industry documents at Glantz's Center for Tobacco Control Research and Education at UCSF has ballooned to more than 50 million pages. The center, the largest of its kind in the world, includes a couple dozen researchers and staff members, some of whom spend their days doing nothing but managing the library of documents and training others from around the globe to mine the resource for research, lawsuits and new smoke-free laws.

Glantz and his research team conduct detailed studies of tobacco control policies and work closely with health advocates to push for strict anti-smoking laws across the country and around the world. Glantz is all too familiar with the subject. He is one of the founding members of the non-smokers' rights movement dating back to 1978 when he helped lead the campaign for California's first non-smoking sections in restaurants.

"I was one of the people who got the whole clean-air movement going in California," he says. "It is very gratifying to go places that are smoke-free now. All of Italy, Ireland and England are smoke-free. You can go out to eat, you can go to a bar, and nobody is smoking."

The dry-witted professor realizes the positions he takes are controversial. He also maintains that both his research and advocacy have always been backed by science -- often his own. It was a Glantz-led study in 1991 that showed evidence of second-hand smoke causing heart disease. Years later, he published another study that claimed smoke-free laws lead to as many as 20 percent fewer heart attacks.

Known for his abrasive style, Glantz still bristles at the notion that his work treads on anyone's freedoms. And he keeps a counter-response at the ready for that argument. "Your right to swing your fist ends where my nose begins," he jabs. "I have never said people should be prohibited from smoking. Everybody has bad habits. But they should not be doing it in a way that poisons the air I breathe."

These days, Glantz is waging a full-blown campaign on Hollywood executives to extinguish smoking in kid-rated movies. Citing research from the National Cancer Institute, he claims smoking in movies recruits as many as 400,000 adolescent smokers every year.

That's why he is pushing for changes that include an R-rating for movies with smoking in them and an anti-tobacco spot prior to any film where someone lights up. At first, he says, the industry ignored him. But that's starting to change.

"I've gotten to the point where three of the major studios are meeting and talking directly with me," Glantz says. "It is not a question of whether we will win this anymore. It is a question of when."

Glantz is quick to point out that the work he does is not for the thin-skinned. Over the course of his career, he has been sued by tobacco interests more than once, had his federal research funding questioned by Congress and been barbecued in the media repeatedly. Still, he calls it all quite "gratifying."

"I'm 62 years old, and I tell people I didn't have a midlife crisis. I know a lot of people who reach 50 who sit around saying, 'What have I done?' I don't have that problem. "I think the world is a lot different because of the work we have done."

Stanton Glantz, best known for his book, "The Cigarette Papers," left the University of Cincinnati an aerospace engineer who had co-oped at NASA during the first moon landing. His transition from rocket ships to cardiology occurred at Stanford where he developed a mathematical model of the heart and became fascinated by the muscle's properties. Glantz credits Rollin Workman, his freshman philosophy professor at UC, as one of the most influential people in his life. "The stuff I learned from him about political philosophy and different ideologies, I still use that in my thinking and working. That was probably the single best course I've taken in my life." 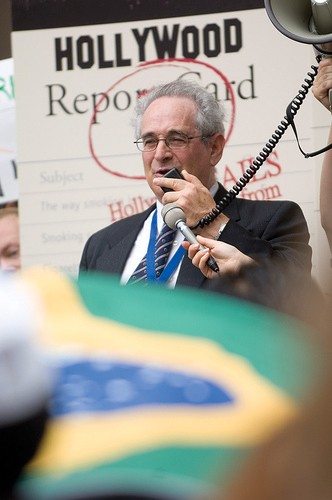 Stan Glantz leads a protest against Hollywood executives who choose to include smoking in kid-rated movies. He says movies recruit hundreds of thousands of new young smokers every year. Photo/Rogers and Associates 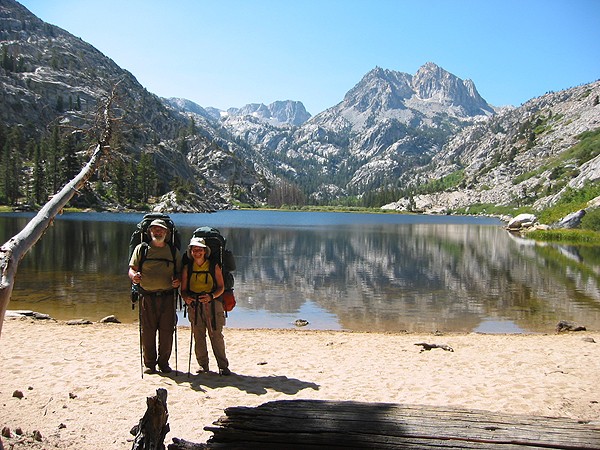 A long hike in the mountains is one way Stan Glantz and his wife, Marsha, assure they're breathing clean air. He and his wife were on one of their hiking trips during 9/11 and didn't find out about the terrorist attack on the United States until days after. 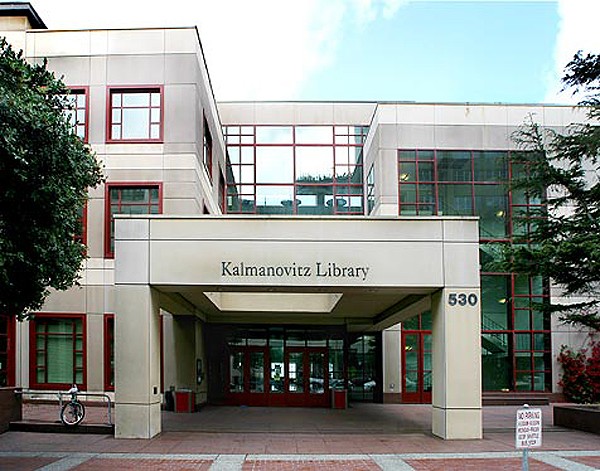 The archive of 50 million tobacco-industry documents at Stan Glantz's Center for Tobacco Control Research and Education is housed inside the Kalmanovitz Library at the University of California San Francisco.