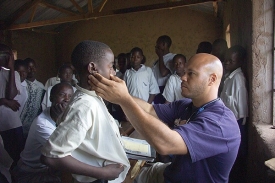 PHOTO GALLERY - ''I experienced the love, respect and dignity of the community,'' says Christopher Lewis of the Tanzanian people. ''People were struggling to survive, yet success was gauged not by material possessions, but rather by how well one received guests. They welcomed me into their homes to dine with them, even if they had to skip two meals to do it.'' Photo/Lisa Mahoney

UC's third-year medical resident had braced himself for mud huts, bucket showers and lack of drinking water on his 2003 international-health elective in Tanzania. But Chris Lewis was unprepared for the number of people being carried into the country's remote hospital already dead.

For instance, the pregnant woman who had tried to walk 24 to 36 hours to get there didn't make it. And the 13-month-old baby who weighed only 4 pounds (the weight of a premature baby in this country) wasn't likely to last long.

Despite the reality of devastating poverty, Lewis cherished his month-long chance to help Africans who had never seen a doctor before. And getting to know them personally was a life-changing experience, he says.

"Not only did I treat tropical disease, but it forced me to go back to the basics. Instead of ordering an MRI, you have to rely on your history-taking skills and your physical-exam skills. It hones in the bread and butter that medicine is all about."

As his trip came to a close, Lewis decided he wasn't ready to let the experience end. "After the cows were ushered from the grassy runway, I boarded a four-passenger puddle-jumper to fly back to Cincinnati," he recalls. "The crowd of waving children pulled at my heart, and I knew I would return to this land."

Six years later, he is founder and president of the nonprofit Village Life Outreach Project and has returned to three rural areas of Tanzania eight more times with groups of 20 to 35 people who, each trip, treat roughly 1,000 acutely ill villagers in the field clinic.

His work, however, has now grown far beyond immunizations and treating AIDS, tuberculosis, malaria, leprosy and parasitic infections. Lewis and his volunteers have implemented a safe-water project for villagers; a lunch program in three schools; a mosquito-net distribution system to curb malaria; lesson plans for local teachers to educate people about health, nutrition and dental care; a pen-pal program between school children in Tanzania and the U.S.; and fundraising initiatives.

Three key concepts guide his mission: an emphasis on preventive health care, long-term solutions that villagers can sustain by themselves and village partnerships throughout all stages of any project.

"Village leaders identify their own needs," the doctor explains. "Then we strategize with them on how to solve those problems together. This buy-in solidifies the idea that they are going to do their part. It's a 'hand up rather than a hand out' mentality."

"The program is totally sustainable," Lewis says. "We don't have to infuse any funds. Instead, each village organized a water committee that goes to other villages to teach people how to build these filters. The last time we gave money to the water committees was to buy each of them two bicycles so they could travel to the other villages."

More recently, village leaders made it clear that the biggest obstacle to education was not the lack of paper, pencils and books, but the lack of lunches for the children. UC med students walked with children on lunch breaks and discovered that those who actually went home to eat (rather than skipping the meal) often walked an hour each direction, then ate only a few banana leaves.

Consequently, Village Life developed a program to help teachers feed 1,200 children in three schools for 4 cents a day. Since then, they have watched both attendance and test scores increase by 20 percent. Overall, rates of malaria are decreasing in all three villages, children are growing healthier and parents are losing fewer children to disease and infections.

Their next project? Building a community health-care center, complete with a library, to serve 25,000 people who cannot reach one of the region's two hospitals. "We dream big," Lewis says, unable to suppress a slight grin.

Right now, the existing hospitals, which usually have no electricity or running water, have to serve 500,000 people. Graduate students from UC's School of Architecture are working on designs for a carbon-neutral structure that would be powered by the sun and wind.

"For the villagers, it's going to serve multiple needs," Lewis says. "For us, we really want it to be UC's multidisciplinary, international training ground."

The work, of course, is greater than Lewis can handle in his spare time, so he has chosen to practice medicine only four days a week, leaving him one full day to run the agency without a salary. In addition, Village Life hired a local bilingual woman as a staff coordinator to manage on-site work in Tanzania year-round.

The accomplishments seem staggering for a simple grassroots organization that began only five years ago. When asked if they astound him, as well, Lewis shakes his head and says, "I don't really have time to reflect on it. I'm just too busy." And how long will Village Life continue its work in Tanzania? "We're staying until they don't need us anymore."

Christopher Lewis has an undergraduate degree from Harvard, a UC faculty appointment and a family-medicine practice at Alliance Primary Care in Clifton. Becoming a doctor was a childhood dream, he says, adding, "I always wanted to be Dr. Huxtable on 'The Cosby Show.'" His work in Tanzania came from a calling "to help make someone else's life better." 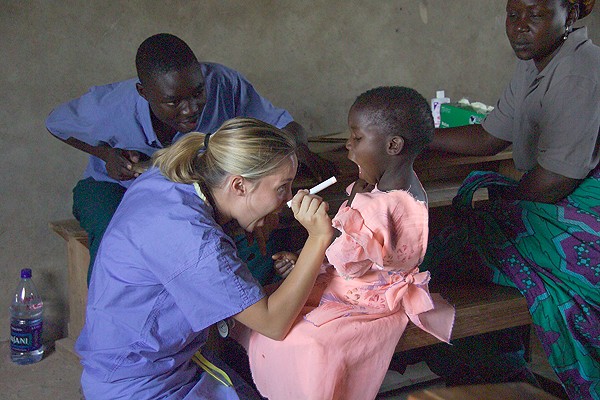 Even without electricity or plumbing, UC students are able to treat a wide variety of diseases in the villages, as demonstrated by Angie Rath, MD '07, now a pediatric resident at Children's Hospital.