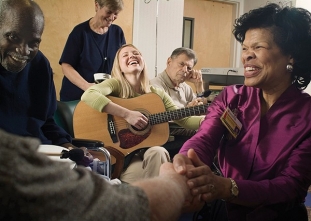 As a licensed music therapist, Deforia Lane combines scientific methodology with the spirit-stirring power of music to help patients heal and deal with trauma. Photo/Billy Delfs

Helping deliver a premature baby from its brain-dead mother was a task daunting enough for the medical professionals in the room, but for the vocalist called in to serenade the intrauterine child, the situation was downright scary.

Deforia Lane took a deep breath, placed her hands on the mother's belly and sang a sweet melody. In response, the unborn child began to dance under Lane's fingers. As the nurses monitored mother and child, they noticed that the baby's heartbeat began to speed up as Lane sang faster.

"You could watch this ballet right through the mother's womb," she says, "My heart felt like it was in my throat, to see life responding to something as singular as that."

Right before the doctors started to deliver the child via C-section, the young woman's parents and caregivers gathered in her hospital room, knowing full well that the birth of the baby would be the end of the mother. Lane asked if she could sing the baby's favorite song, and everyone's eyes focused on the covered abdomen.

"When I sang 'He's Got the Whole World in His Hands,' the sheet moved, and we all smiled … and cried. Life inside of death. That was a day to behold."

Singing in most hospital settings is not new for Lane. The credentialed music therapist is director of the music therapy program at the University Hospital of Cleveland Ireland Cancer Center and Rainbow Babies and Children's Hospital, where she uses the power of song to ease the mind, train the body, soothe the soul and, above all, provide hope to those who need it most.

"Music therapy is many different things, and it can reach us in many different areas," she says. "When I'm in an intensive care unit, I use music to train the heart rate or blood pressure -- to get beyond the conscious part of a person."

Music can also be used to improve a patient's motor skills, she adds. "When we tailor the music, you would be surprised to watch how differently a Parkinson's patient can walk. The music affects their brain and motor planning in such a way that it's almost magical."

While Lane's work is firmly rooted in science, she acknowledges music can move the heart and the soul in miraculous ways that she cannot explain. "It's more than notes, rhythm and harmony," she says. "When it's infused with spirit, it's untouchable and unexplainable."

As a child aspiring to become a nurse, young Deforia felt music move her heart, although she did not understand how music and medicine could be combined. "My love for music began in the small living room of my home in Dayton, where I heard the resonant singing voice of my father and was mesmerized by the exquisite piano playing of my mother."

A career in music never occurred to her until a high school voice teacher urged her to audition at the College-Conservatory of Music, where she won a scholarship. "CCM gave me wings to fly," Lane continues. "It ushered the skinny-legged girl of color into the splendid world of opera."

The exact moment when Lane decided to trade opera halls for hospital wards is uncertain, though she glimpsed music's healing power at a young age. "I remember being in church as a child," she says, "seeing the arthritic women who struggled to walk down the aisle. But when the gospel choir would begin to sing, their hands and arms would wave and their feet would move without restriction, as if set free from something."

When she discovered the science of music therapy, an excitement stirred. She always knew music could help heal, "but it was wonderful to find a discipline that would teach me the nuances of this."

As with music itself, music therapy has many different applications. Lane has designed programs for the mentally handicapped, abused children, geriatric clients, behaviorally and psychiatrically disturbed adults, pediatric cancer patients and the terminally ill. Her work has been so successful that she was the country's first music therapist to receive grant money to study music's therapeutic effects on cancer patients.

That situation was more personal than she would have liked. Twenty years ago, she was diagnosed with breast cancer, which placed her on the receiving end of music therapy's power.

"Music was a constant reminder that I was more than the disease," she explains. "I was also a musician, a singer, a pianist, a teacher, a mentor.

"It gave me life beyond breast cancer. My hope was that my doctors saw more than stage 2, type 2 carcinoma."

When Lane had trouble sleeping, music helped her to focus her attention on something other than worry. It also gave her a voice in a time of need. "People will sometimes listen to a song much more easily than they will listen to someone talk. I composed a song, and people would listen to that and hear far more than I could say."

Lane has come to welcome life's unforeseen twists. "Life will be filled with unexpected scores of music -- surprise symphonies, if you will," she told CCM graduates as the convocation speaker two years ago. "Be willing to be shaped and molded by your successes and your faux pas -- they are equally important."

Once an aspiring opera singer, she admits that she has struggled with questions of "what if?" over the years, yet today she is content. Her life is full of music that brings joy to audiences daily. "I still use my performing skills," she says. "My stage is just different, that's all."