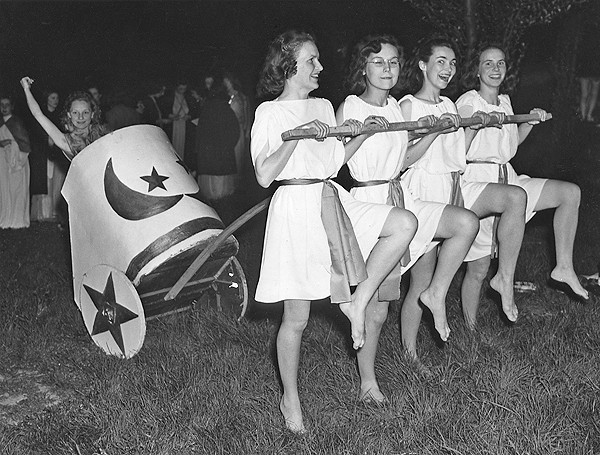 UC women in the '40s stepped out to do their best chariot-horse impressions during the university's annual Greek Games, which included archery, hurdling and discus throwing. Events often featured contests between classes, such as the chariot race in May 1940 between the sophomores (pictured) and freshmen.

"It was a cold day, and we were barefoot, so the football team stood around us between events to keep us warm," recalls Lucy Dunham Levick (second from right), att. '42. A Tri Delta member, Levick says she was unofficially voted "Most Graceful Horse" that day. Competing with her are (from the left) charioteer Majel Hirlinger, Ed '42, '43; Peggy Lavell, DAAP '43, Ed '51; Frances Buerger, A&S '42; and Martha Fisher Klitgaard, A&S '42.

Started in the 1920s, UC's Greek Games evolved out of a national concern that competitive sports were making women "too masculine," says UC archivist Kevin Grace, MA (A&S) '77. Many colleges and universities throughout the country replaced female intercollegiate athletic competitions with Greek Games, thought to channel young women into "proper" ideas of physical expression based on classical traditions that included poetry, song and dress.