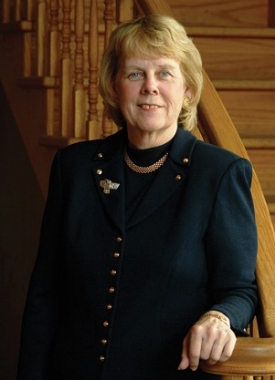 Early in Dorothy Smith's career as a pharmacist, a patient's son asked if he could give the pharmacy nearly a dozen medications belonging to his recently deceased mother. Smith recalls that the prescriptions were from 10 different physicians, and many overlapped. The reason the pills went unused, the son explained, was because his mother had not understood what all the pills were for or how to take them.

Smith was appalled. Not only because the deceased mother had made appointments with 10 different physicians, but because if only she had followed the advice of even one of the doctors, it might have saved her life.

"I will never forget that," says Smith, who went on to become an internationally known patient advocate. "There must have been a reason this woman purchased all the medications but took none of them. So many patients are not taught how to use their drugs correctly."

Smith is founder and president of Consumer Health Information Corp., a Washington, D.C., company that develops easy-to-understand programs to help patients manage their prescription drugs, medical devices and other treatments. She is fulfilling what she calls her life's purpose -- "keeping people informed so that they can take their medications safely and wisely."

"My whole career is committed to helping patients get the information they need," Smith says with a modesty that has earned her a reputation as a compassionate provider. "I never planned it; I just wanted to help patients get the most benefit from their prescribed treatments."

That compassion was instilled by her parents, Smith says, and she carried it with her when she attended pharmacy school at the University of Saskatchewan, then received her doctorate at the University of Cincinnati, one of the few institutions at the time with a PharmD program.

It was at UC, she says, under the tutelage of the renowned program director Donald Francke that she found the support and encouragement to effect change in the medical field and the pharmaceutical industry. She was constantly advocating for something unheard of at the time -- to let pharmacists directly consult with patients on their drug therapies and work more closely with other members of the health-care team.

"Pharmacists were always told to refer the patient to the doctor if they wanted more information," she says. Physicians consulted, and pharmacists dispensed.

But that didn't make sense to Smith. So she got permission to interview patients, learned how to do a drug history and forged a trail of successes. Her first book, "The Medication Guide for Patient Counseling," became a required textbook in U.S. and Canadian colleges of pharmacy and medicine. From there, a plethora of books, academic titles and clinical appointments ensued, all of them geared toward helping patients better understand their medications.

Smith is often referred to as a pioneer. In the 1970s, she was in uncharted territory, clearly stepping over a delineated line regarding roles. Today, training in patient counseling is an essential -- and required -- part of a pharmacy degree.

"For the longest time, I was out there all alone," Smith says of the strides she's made and seen others make in her field. "I never considered myself a patient advocate," she muses, "but I guess I am." 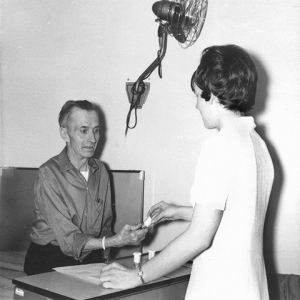 In 1969, Dorothy Smith interviewed her first patient, above, during her hospital pharmacy residency. In those days, people called pharmacists "druggists," she recalls, so when she introduced herself as a "pharmacist,'" the gentleman misunderstood her and asked, "What is a lady farmer doing in my hospital room?" When he was discharged, he gave her a breadboard he had made in occupational therapy and wished her good luck in her career. ''I took that breadboard when I went to UC to study for my PharmD,'' she says. Photos courtesy of Consumer Health Information Corp.

Dorothy Smith has published 130 papers and 23 books geared toward consumer education. Her company has won national and international awards for its patient education program. (Many of the materials her company produces are available free of charge to patients from their health professionals.) Smith was named a UC Alumni Master and a Women's Studies distinguished alumna in 2001. In 2008, PharmaVoice magazine named her one of the 100 most inspiring people in the pharmaceutical industry."