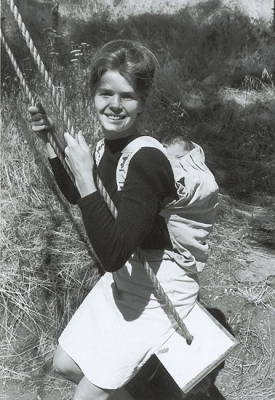 PHOTO GALLERY - Ann Moore created the original Snugli baby carrier 46 years ago so she could remain active and still be physically close with her daughter, Mandela. Her inspiration came from watching mothers in West Africa while in the Peace Corps.

Ann Moore didn't set out to change the way parents bond with their babies.  And the University of Cincinnati grad certainly didn't expect to become one of the most influential inventors in history. But her invention of the Snugli -- the original hands-free soft baby carrier -- in the mid-'60s accomplished both. Moore's design has been honored with permanent placement in the Smithsonian Institute and was recognized by the Wall Street Journal as one of the most important inventions of the 20th century.

Her idea grew from a basic desire to experience the same calm closeness with her newborn daughter that she had witnessed African mothers enjoy while serving as a Peace Corps nurse in Togo. In 1964, while living in Denver, she and her mother stitched together a pouch for baby Mandela (named after Nelson Mandela) based upon the simple fabric slings used to carry African babies. Moore was able to cook, run errands and even ride her bike, all while bonding with her infant. Moms who saw the two of them out asked where they could buy one, and soon a cottage industry was born.

Moore's invention earned a patent in 1969. She and her husband, Mike, ran the successful business until 1985 when they sold the Snugli rights to Gerry Baby Products (later purchased by Evenflo). Disappointed by the changes the company made to mass-market the product, Moore returned to her sewing table and introduced a new soft baby carrier, the Weego, in 1999 -- just in time to tote her grandchildren.

I grew up on a farm in Ohio. Farm life is wonderful for kids to grow up in because you have a very natural interpretation of your environment. You are so close to the earth. We had to sort of make our own recreation, and I think that is good for your brain. On a farm, when you don't have something right at your hands, you have to create your own solution.

After graduating from UC, I went to Columbia University and taught pediatric nursing. The Peace Corps was just getting started, and we had this wonderful two-year experience in Togo doing preventative health. 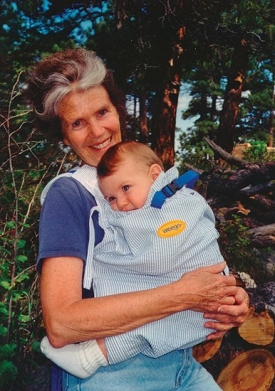 The same concept held true when she reinvented the product under the Weego name in '99.

In some ways, their humanness in Togo was much more advanced than ours. For example, the elderly are all part of the family until they die. And when a sick child would come to the hospital, the mother would bring all the siblings, and they would all sleep on the floor with the sick baby. That was "rooming in," and we didn't have that in very many places in the U.S. yet.

We noticed that the babies were so much more emotionally secure and centered. We all felt it was because of always being carried and being breastfed. Babies didn't just sleep all the time, and when they were awake, they were very much a part of the moving world because they were on their mothers' backs as they moved. It just seemed that there was much more inner peace within the kids.

Nobody carried their babies in America. They always put them in those plastic infant seats. There is no human warmth through that. It is all plastic and hard. So we went to the fabric store and started working on the Snugli. I'd go to the grocery store, and people would say, "Oh my gosh, where can I get one of those?"

Mother had gone back to Ohio, and she would make one, and we would mail it out. When mother needed more helpers, she turned to her friends who were beautiful seamstresses, and they started helping make the Snugli. They were all produced in Ohio. At one time, I think we had about 125 cottage workers. They made a beautiful product.

I never really thought of myself as an inventor but a problem solver. I can remember when our kids were in Snuglis. Mealtime in the evening was always sort of a fussy time. To be able to carry them and fix dinner and have them calm and quiet was such a help. So a secondary byproduct is the mother or father has their hands free.

We didn't do any advertising. It was just one parent telling another parent. That's how we started. It was lots of hard work, but, oh my gosh, it has all been such a joy.

In the original Snugli, you had to take a seam ripper and rip out the tucks and darts as the baby grew. Today we have buckles and sliders because none of the young moms know how to sew anymore.

Now there are so many kinds of baby carriers, which is fabulous because the more parents can get in touch and have that closeness with their babies, the better the world will be. I think when kids have a lot of their needs satisfied in their early years, they grow up to be much more loving adults.

We are all one big happy family when you get down to the mainstream of folks. There are many ways to solve a problem. I think it is so great to be open to all the different ways in life that people live and find their goodness.

Soon after the Moores sold Snugli, a friend approached them about designing a backpack for patients who depend on oxygen tanks to breathe. Like Snugli, that practical invention birthed a successful family business called Air Lift. Twenty-four years later, Air Lift, based out of Evergreen, Colo., offers a broad line of soft-sided oxygen carriers, equipment accessories and home-health professional bags. Anne's role these days, she says, is as a cheerleader.

She and Mike recently moved into their "totally green" sustainable adobe-style home in the foothills west of Denver, where they enjoy serving as a host family for foreign visitors for the U.S. Department of State.