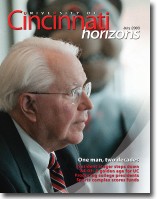 When former University of Cincinnati president Joseph Steger told "Cincinnati Horizons" readers that he had been a "sweathog" in high school, he never dreamed he was telling the entire world, yet doing so helped the magazine win its first international award.

In June, editor Deborah Rieselman received a 2004 International Gold Quill Award from the International Association of Business Communicators (IABC) for writing in the personality-profile category. The only award recipient from the Greater Cincinnati IABC chapter, Rieselman received the award for both the story she did on Dr. Steger's retirement and the related work plan that itemized the preparation, execution and results of the article.