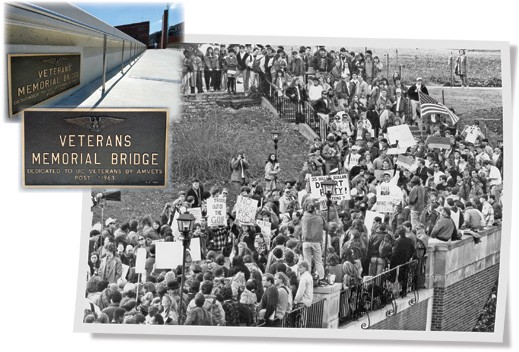 Veterans Memorial Bridge withstood many protests in its 36-year lifespan, including this 1991 gathering of students both for and against Desert Storm, America's first military involvement in Iraq. It couldn't, however, stand up to progress. The short span between McMicken Hall and Tangeman University Center served as UC's informal public square from 1965 to 2001, when it was razed along with the south wing of TUC.

University officials are counting on Bearcat Plaza, opened this spring as part of MainStreet, to serve as the new public square for the exchange of ideas.

The plaque that once identified the old TUC bridge has been relocated to the new span betweeen CCM and the rebuilt south wing of TUC.