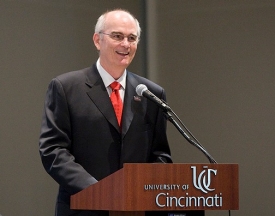 Stating that UC stands for "up and coming," Gregory Williams greeted the university community on Sept. 9 as UC's 27th president. Williams, who is resigning as president of the City College of New York, said he looks forward to serving the University of Cincininati on Nov. 1 with "great pride and humility."

"My goal is to continue the great momentum that has been established at this great institution and to move the university forward as quickly as possible," he said. "We have a great story to tell, and we need to get the word out. We're going to be the big dogs."

UC's national search yielded more than 100 applicants, most of them presidents and provosts at major universities, said Buck Niehoff, chairman of both the UC Board of Trustees and the search committee. "We were impressed by the quality of the candidates," he said, "and the action we take here today will affect higher education in Ohio for generations to come."

The search committee's high expectations of the presidential position, as outlined in its five-page presidential profile, were a testament to former president Nancy Zimpher, whose six-year term ended in April when she become chancellor of the State University of New York. Despite the intimidating job description, Williams' credentials measure up, reflecting collegiate success in all areas.

During his eight-year presidency at the 161-year-old City College, he saw student enrollment more than double, research funding nearly double, the college's first capital campaign launched (led by Williams himself, who raised more than $310 million), more rigorous admissions standards implemented, the college's reputation soar, and U.S. News & World Report name the college as having the country's most diverse campus. He leaves behind a campus in Harlem where more than one-third of the students are Hispanic, nearly 30 percent are African or African-American, more than half were born outside of the U.S., and 90 languages are spoken.

"Diversity has always been important to me," said the 65-year-old son of a biracial marriage, who considers himself an African-American. "Embracing diversity has to be in the fabric of an institution. It's the future of the world." Diversity has been a genuinely personal issue for Williams, author of the best-selling memoir "Life on the Color Line: The True Story of a White Boy Who Discovered He Was Black."

As a child, Williams attended a whites-only school in Virginia, where he lived with his white mother, three siblings and his darkly "tanned" father, who had wavy black hair and claimed to be Greek or Italian. Actually, Dad was the illegitimate son of a black maid and her white boss, but the fake image helped him develop a successful career as a restaurant and tavern owner.

Unfortunately, living a lie took its toll on the father in the form of alcoholism. By January 1954, the business was ruined, and Mom had left with their two younger children. A destitute dad loaded 10-year-old Greg and his younger brother on a Greyhound bus, headed for his hometown of Muncie, Ind.

While in transit, the father told his sons that he was "colored" and that they were "part colored." They would be treated differently in Indiana, he said, where they would live with distinctly black relatives in a town full of Ku Klux Klan members, thereby, losing the white privileges they had known.

Rejected by their maternal relatives and officially classified as "negro" on school records, the boys began to experience the racial intolerance that was rampant in the '50s. At the same time, they were shunned by blacks because they looked white.

Determined to persevere in high school, Greg maintained an excellent grade point average, became the starting quarterback for the Muncie Bearcats and played forward on the basketball team. Off the court and field, however, racial walls were apparent, and he was threatened with expulsion from school simply for talking to white girls.

Williams' heritage growing up as a black child led him to claim a predominant African-American identity.

Meeting with UC students soon after the announcement of his appointment, Williams shared his story: "I grew up in a black housing project and lived on welfare for a while. But I always had a thirst and desire, instilled by my dad, for knowing I could change my life. Education transformed me.

"Along the way, I realized I could help others change their lives, too. I'm in higher education because I believe deeply in the transformative power of education. We are transforming lives every day and making a difference."

He expressed his "delight" over returning to the Midwest, which feels like home, and becoming a "Bearcat" once again, he said. "I look forward to being the No. 1 fan."

Williams has long followed University of Cincinnati news, beginning with the fact that he played high school basketball with Ron Bonham, an upperclassman who played on the 1962 UC Bearcat team that won the NCAA championship. "I paid a lot of attention to UC over the years," he said.

Between Muncie and Cincinnati, he put himself through Ball State University by working full time as a deputy sheriff, earned four more degrees and worked as a high school teacher, a law professor and dean of the law school at Ohio State University. When contacted about the UC position, he started researching the university and found himself surprised by "the incredible job being done in research," he said. "UC has the status as a major research institution. It is absolutely amazing."

Although he entered the interview process already impressed with the university, the search committee heightened his opinions. "I was impressed with the quality of people on it, their clear love of UC and the types of questions they asked. It energized me."

Gregory Howard Williams at a glance

Publications
Author of three books, including "Life on the Color Line: The True Story of a White Boy Who Discovered He Was Black," named 1995 Book of the Year by the Los Angeles Times; featured on "Oprah," "Dateline NBC with Tom Brokaw," "Larry King Live," ABC's "Nightline with Ted Koppel," "Fresh Air with Terri Gross" on National Public Radio

Links:
Return to splash page for coverage on President Gregory Williams
Read more about Williams and UC's presidential transition
Watch video of Williams' first speech at the University of Cincinnati