To The Moon ALICE

Want to know what something is made of? Just smash it open.

That seemed to be NASA's advice in October 2009 when it hurled a satellite into the moon's surface at a speed of 5,400 miles per hour. The resulting crash into a permanently shadowed crater near the moon's south pole created a six-mile-high plume of particles that scientists say dated back to the dawn of the solar system and which had never been analyzed.

But that was about to change. The Lunar Crater Observation and Sensing Satellite (LCROSS) carried a low-cost instrument built by University of Cincinnati alumnus and scientist David Landis, A&S '90, PhD (A&S) '94, to provide long-awaited ultraviolet measurements of the dust particles.

Dubbed ALICE, Landis' spectrometer indicated the presence of hydrocarbons, hydrated materials, vapor and water-ice. The mission had confirmed the existence of water on the moon.

Finding water on the moon was critical to future exploration because humans and machinery both require it. Unfortunately, water is heavy, and transportation is expensive, costing more than $100,000 to carry a single gallon from the Earth to the moon.

According to Science magazine, NASA scientists estimate that roughly 340 pounds of water were found in the material excavated from Cabeus, the satellite's crater of impact. Scientists believe the water collected across the entire moon's surface could potentially be used to produce drinking water, oxygen for breathing, an environment for cultivating food and even hydrogen for rocket fuel on future missions to Mars. 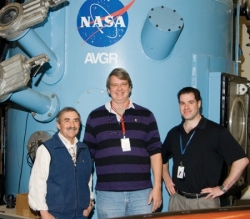 David Landis (center) was the only private sector member of the science team to work on the LCROSS mission. With him are LCROSS science team member Pete Schultz of Brown University (left) and NASA's Anthony Colaprete, LCROSS principal investigator. photos/courtesy of NASA [+]

For quite some time, scientists have suspected frozen water particles were nestled in the moon's polar craters, but exploration was difficult because permanent shadows from the Earth and sun hid them. Blowing up the hole to release its secrets looked like a viable option.

"I think it's amazing," chemistry graduate Landis says, "to be able to participate in an important discovery that, aside from potentially providing useful resources for manned missions to the moon, may help us answer the unanswered question of how the moon was formed."

Landis played a crucial role in NASA's success. On the LCROSS payload were two of his creations. First, partnering with Ocean Optics, he designed and built the ultraviolet-visible (UV/Vis) spectrometer, which provided ultraviolet measurements of the dust particles. (UV/Vis spectroscopy is routinely used in analytical chemistry.)

Second, as part of his own company, Aurora Design and Technology, he designed, developed and delivered the optics responsible for viewing scattered and reflected light in the dust cloud after the satellite impacted the moon's surface. He also served as the only private-sector member of the LCROSS science team. 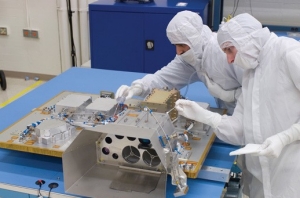 The scientific instruments aboard LCROSS are inspected. Landis' optics and spectrometer are included. photo/NASA [+]

Not bad for a guy who built the instruments literally in his own garage. His one-person company has no James Bond wonder facility for production, and his only lab assistant is his dog.

While the instruments required rigorous testing by NASA before they could reach mission-ready status, he successfully created an accurate spectrometer for only $60,000 (compared to the $2-million estimate from large corporations). And NASA soon realized that smaller commercial tech companies may be the way to reduce mission costs.

"What I provide is proof that commercial instrumentation can actually last in space," Landis says. "LCROSS proved that it is possible to do space missions significantly cheaper than they're currently done. It was an enormous success.

"The data was just unbelievably good, and the instruments worked perfectly. It was interesting to see years of work be used for four minutes of data."

Since LCROSS launched, NASA has maintained Landis' contract for a number of other missions. Currently in orbit is O/OREOS (Organism/Organic Exposure to Orbital Stresses) nanosatellite, which will use Landis' instruments to evaluate how microorganisms and organic molecules survive when exposed to the stresses of space. The size of a loaf of bread, O/OREOS will "feed" the microbes in its vessel and analyze its growth cycle and survival in space. Landis is excited about initial results from the satellite's first six months in orbit. 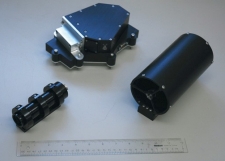 Landis' spectrometer (top) and optics will be aboard LADEE, prepared for launch in 2013 to orbit the moon and measure its surrounding dust. A 12-inch ruler shows their size.

Another mission-critical spectrometer will go aboard LADEE (Lunar Atmosphere and Dust Environment Explorer). Prepared to launch in 2013, the satellite will orbit the moon and measure its surrounding dust.

"The point is to determine the spatial and temporal properties of lunar atmosphere and dust exosphere," Landis says. "It has been known since the Surveyor and Apollo missions that there was a lunar atmosphere, but the unanswered questions are: What is it made of? Where does it come from?"

Ultimately, reaching for the moon hasn't been high enough for Landis. He also has custom-made spectrometers that will ride on the next Mars rover to analyze the light created by a ball of plasma that results from the rover firing a laser on a distant rock. Although current spectrometers can analyze this material, none to date have been able to do so from a distance. 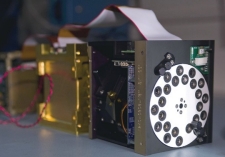 Inside the box, right behind the front plate, is Landis' spectrometer, which is currently orbiting in the O/OREOS nanosatellite to evaluate how microorganisms and organic molecules survive when exposed to the stresses of space.

Expanding responsibilities made Landis realize that his garage-sized company would soon grow inadequate. Consequently, when Draper Laboratory approached him to work in its biomedical engineering group, he carefully considered it … before saying, "No."

"I've always been a space nut," Landis says, joking that if he had not been nearly blind he would have become an astronaut. "I just couldn't give up on space," he says of the proposition.

So Draper came back with another offer -- the senior program manager position in its Space Science Instrumentation Division. He jumped at it. Now he works for them, handling NASA projects and other government and corporate clients.
"It's something different every day," says Landis. "One day I'm working on mechanical engineering; the next, it's optical. After that, it's spectroscopy.

"I love being in the lab and creating things. It's great figuring out that things can be done differently but still result in great science."