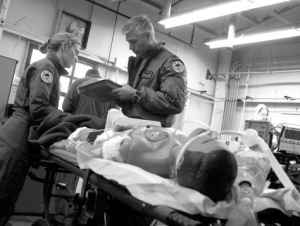 A few days before Air National Guard Lt. Col. Sheffey Massey deployed to Germany, he was reviving a patient suffering ventricular fibrillation while the engine noise of a military transport plane droned in the background. He and his team performed several rounds of a shock with the defibrillator followed by chest-thumping CPR until normal heart function was restored.

Despite the team's success, the patient never thanked Dr. Massey … because he was never alive to begin with. Similarly, the airplane's din did not come from a real engine.

Massey, along with a critical care nurse and a respiratory therapist, were working in a darkened simulation room at UC Health University Hospital. The entire time, a group of administrators, nurses and physicians monitored and recorded the team's efforts in the control room next door.

The simulation scenario was one of the final tests in July 2011 for the three medics after a two-week advanced training course at UC's Center for the Sustainment of Trauma and Readiness Skills (C-STARS), housed at the UC Institute for Military Medicine.

The program, started in 2001, is one of three C-STARS centers in the United States and the only one to train teams like Massey's, known as Critical Care Air Transport (CCAT) teams. The teams are responsible for treating and flying wounded military members from Afghanistan and Iraq to large base hospitals like Ramstein Air Base in Germany, Bagram Air Base in Afghanistan and the National Naval Medical Center in Bethesda, Md.

The advanced course at UC is the final step of the CCAT members' training pre-deployment. Returning medics, like Massey, repeat the course every 20 months to maintain their skills. Massey says the simulations are better each time he arrives, concentrating on the severe injuries CCAT members will encounter in the war zone.

"Their focus is on what's happening downrange right now," he says. "They take the patients we are seeing today in combat, put them right into the simulations and make them real."

CCAT trainees arrive at UC with at least two years experience in critical care, an introductory CCAT course and altitude conditioning already under their belt. But that doesn't prepare them for flying a group of critically ill or injured troops on a seven-hour flight, says C-STARS deputy director Maj. Mike McCarthy. That requires the 14-day CCAT training program.

The course includes five simulations, each focused on a specific injury set, from traumatic brain injury to a collapsed lung. Trainees, 12 to 15 at a time, hear lectures from UC trauma faculty, participate on rounds in the hospital's intensive care units, observe and participate in trauma care and complete Air Care missions with UC Health doctors and nurses. They also work a five-hour training flight aboard a C-130 military transport plane.

"All scenarios, both our simulations and on the flight, are things that have actually happened," critical care nurse McCarthy says. "We keep it as real as possible. If a mistake is going to be made, we want it made here. We don't want it made out there." CCAT training is kept even more current with input from the military medics who educate the trainees and work in University Hospital's surgical and neurological intensive care units. Known as the cadre, these medics deploy regularly to bring back the most recent combat-theater experiences. Five deployments have led McCarthy to see that the patterns of injuries change from conflict to conflict, from severe burns in Iraq to damage from improvised explosive devices (IEDs) in Afghanistan.

"The theater is a constantly moving target," says C-STARS director and UC associate professor of trauma Col. Warren Dorlac. "It will not be the same six months from now as it was six months ago, so it's important for us to have someone coming back who knows the latest layout, how we're using personnel and the type of casualties we're seeing."

The cadre also participates in a weekly conference call with CCAT leadership in the field, reviewing each soldier airlifted that week. Growing trends that could affect future care are immediately added to the C-STARS curriculum.

New techniques are incorporated into civilian care as well. In recent years, University Hospital and other trauma centers around the country have changed their resuscitation of trauma patients to match successful methods used in the field.

As missions have grown since 2001, so has UC's C-STARS program. The cadre runs about 14 courses per year, and UC trauma faculty hold leadership roles with C-STARS operations globally. In 2009, Dorlac deployed as director of the Joint Theater Trauma System, head of all trauma services in Iraq and Afghanistan. Since then, he regularly returns to consult.

UC research also benefits the program. UC professor Alex Lentsch, director of the Institute for Military Medicine, says a $24 million Air Force award has led to several studies focusing on the unique environment of medical evacuation. Researchers work with the cadre to test UC-designed equipment and look at task saturation during a flight.

"The CCAT teams are the ones that will be using the equipment during deployment," says Lentsch, vice chairman for research in the department of surgery, "and much of what we do focuses on assuring that equipment will function properly in austere environments, such as high altitude. C-STARS members are involved in the planning, conduct and interpretation of most of our studies."

Dorlac puts it into perspective. "When you're out flying over the Black Sea or the Caspian Sea, coming back with three very sick patients, there aren't a lot of places that you can stop off in between to get help. So teams have to be able to handle just about everything that gets thrown at them. That's really what we're trying to instill upon them when they're here -- the ability to function independently at 35,000 feet with very little other support."