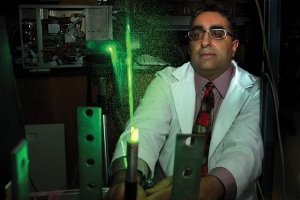 Sid Khosla, professor of otolaryngology, says pockets of air moving within the larynx may explain why individual voices are different and can have a different richness or quality to their sound. photo/Dave Collins

For 35 years, Rita Jan Christian could not speak above a whisper. When she was 18, a New Year's Eve car crash crushed her larynx and nearly destroyed her vocal cords. Multiple visits to specialists did not correct the problem, and she began experiencing the social isolation common to voice-disorder patients.

But earlier in 2011, Christian was sitting in an exam chair in a UC Health clinic, looking determined. She inhaled, pursed her lips and focused. A single long syllable, "woooo," brought a smile to two faces -- hers and speech therapist Eva van Leer's.

"That was better," van Leer said, encouragingly. "Did you hear that? It had more clarity, less noise. Do it again."

Christian, a patient of UC's Voice and Swallowing Center, is learning how to use her new vocal cords after UC surgeon and laryngologist Sid Khosla reconstructed them over a span of five surgeries last year. During monthly sessions, van Leer helps Christian relearn how to speak, using her diaphragm, throat and surrounding muscles to build her voice, find new pitches and create more volume where there was none.

In the nearby Medical Sciences Building, Khosla, a professor of otolaryngology, works with an unexpected research partner -- aerospace engineer Ephraim Gutmark, an Ohio Eminent Scholar and a UC distinguished professor.

With $2.5 million in funding from a National Institutes of Health grant, the pair have been collaborating on the causes of voice disorders and the most effective ways to treat them. Gutmark's focus on aeroacoustics (how airflow patterns can generate sound) led him to study vortices -- rotating pockets of air, which produce sound in jet engines, for example, and suction in tornados.

"Understanding how airflow patterns affect engine sound helps us determine how we can reduce jet noise," Gutmark says. "We can apply the same understanding to study voice.

"Our purpose is different, but the physics concepts are the same. Once you understand how airflow structure produces acoustics, you can either make the acoustics quieter -- for jets -- or make them stronger -- for voices." 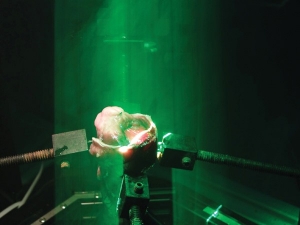 UC researchers use an animal larynx, lasers and cameras to visualize and capture how air moves through the organ in an effort to better understand and treat voice disorders. photo/courtesy/Sid Khosla

Researchers had already developed computational and theoretical models to demonstrate how vortices affect sound production, but no one had seen the process at work. In 2007, Khosla, Gutmark and the UC team -- communication sciences and disorders professor Suzanne Boyce, research associate professor Jun Ying and Liran Oren, a PhD candidate in aerospace engineering -- were the first to identify and measure vortices in an animal larynx. Two years later, they landed the NIH grant.

Originally, Khosla and Gutmark believed they would split a larynx in half, then look through a glass plate to view the passage of air through the voice box. Instead, they developed a technique that allowed them to view the function of vortices through an intact larynx model, using a specially angled camera that snapped 10,000 frames a second and from which they had eliminated distortion caused by the angle -- another first in the field.
In their experiments, they push air through an excised larynx fitted over a blower and sitting under a glowing green laser. They place drops of olive oil in the airflow before it enters the larynx.

As the air is blown through the organ, the droplets disperse, illuminated by the laser and photographed by the camera. By capturing images of the droplets from millisecond to millisecond, Khosla and Gutmark can measure the direction and velocity of the air between and above the cords during vibration.

Those measurements tell them what is happening to the air inside the larynx -- the first time researchers have been able to witness what takes place inside the one of the least understood organs in the human body.

"We know that voice is produced when airflow from the lungs passes over the larynx and the two halves of the larynx, or vocal cords, vibrate with the airflow," says Khosla. "What we don't know is how the air causes the vibration and what makes certain voices louder or deeper than others."
The grant enabled the team to prove their hypothesis that not only are vortices responsible for normal voice production, but that they create negative air pressure that pulls vocal cords together in closing. That closure creates the intensity of sound that we hear as loudness, Khosla says. The suppression of those vortices in laryngeal disease leads to abnormal voice, he believes.

"It's been presumed that if we in–crease the air pressure below the larynx, if you put in more effort, that's how you get a louder voice. But we know now that the more rapidly the vocal cords close, the louder the voice will be. Vortex strength correlates very well with how quickly the cords close."
During the initial work from the NIH grant, Khosla started treating Christian. In the end, he rebuilt her larynx by creating the specific anatomical features most critical to producing sound. The resulting vocal cords do not open as wide as typical ones, but that's not necessary, he says.

"We focused on factors that will increase the rapid closing of the cords, to optimize the strength of the vortices. You don't need it to look like a regular larynx to produce sound."

After the surgeries, Christian began weekly appointments with UC therapists van Leer and Bernice Klaben to relearn how to produce voice. One of her exercises is designed to narrow the opening of the vocal tract at the mouth, creating pressure on the vocal cords and producing greater vibration.

"I was very surprised that it takes so much work," she says. "I really have to think about everything, to line up my muscles, posture, breathing. It's like you have to go on stage every time you talk.
"Before the surgeries, I was sure I would never be able to have my voice again," she adds. "I think I salvaged enough of my personality to communicate one-on-one, but I was not good publicly."

In January, she first produced one and a half seconds of high-pitched, breathy voice in a session. By July, she could hold notes for five to six seconds and practiced vocal warm-ups while driving.

"Usually I'm the person pushing the patient, but with her, it was the other way around," van Leer says. "She got much better than expected, and her instrument keeps changing."

By the end of her session, Christian and van Leer have picked up some new exercises and discarded others, as well as found a new pitch lower than she had reached before, one that van Leer places as around the normal level of a woman's voice. "Normal" is a term Christian had rarely been able to apply to her voice, and it made her tear up to hear it.

"I have high expectations for myself, but that word got to me," she says. "You know, when you're different from the rest of the world for years, and then you find you have something normal, that's a lot to gain."

Link:
More about the research